Do you want to punch your enemies and have them stay punched? The Monk might be the class for you.

Monks are perhaps the most mobile class in D&D. Barring the occasional Flight spell, no class has more ability to get around the battlefield as quickly or as consistently as the Monk. And while they might not hit as hard as a Barbarian or a Fighter, they are able to leverage their tools to generate a surprising number of attacks per round. What’s more, their ability to capitalize on a few powerful effects (thanks to their Ki abilities) to make sure that they can take out (or at least make life miserable for) key targets while still being present enough on the rest of the battlefield to do whatever they need.

So the Monk ends up being able to pack a lot of punch (literally) into every round. So let’s take a look at what they’re capable of.

Need To Unlock Your Power? Use A Ki

Monks are, as we discussed, incredibly mobile. What you might not know is how balanced they can be between offense and defense. With their Ki powers, Monks are capable of adapting themselves to whatever the situation needs. They’re basically always going to have the right tool for the job. Are you facing down some hard hitting monsters? Use patient defense or deflect missiles to buff your defense and possibly even get in some retaliation. And with abilities like Step of the Wind and Stunning Strike–you can really make sure those key attacks do what they need to. Monks are incredibly adaptable. They can be resilient when they need to, and are excellent brawlers are you might expect from a martial-arts based class.

And with other passive abilities buffing your offense and defense at lower level, every monk can make themselves into what the situation needs. Their subclasses really help focus their expertise. Which I think is good–too much flexibility can make it hard to decide what to do from round to round when things aren’t as clear as they could be. Let’s take a look!

The Way of the Drunken Master might be my personal favorite Monk subclass out there. They double down on the already considerable mobility of monks–but more than that, they feel like the martial artist type. If you like frenetic action and want to feel like you have interesting decisions to make at every step of the combat, the Drunken Master is the way to go. They are consummate brawlers, and with their ability to redirect missed attacks (especially easy with dodges) they can hang on the frontline and make more attacks than anyone. Anyone.

Pick this class if you want to play a character straight out of a kung fu movie.

The Way of the Four Elements is sometimes called the Avatar subclass. And it’s easy to see why. You gain the ability to use your ki to fuel elemental effects–some of which emulate spells or create other magical effects. This one is perhaps the trickiest monk to use, however. Because the secret to a Way of the Four Elements character is to know when to use your costly elemental abilities and when not to. They’re perfect situationally–and you’ve got the class abilities to make sure those situations come up (near a pack of enemies, near a lone powerful opponent that needs to get taken out, etc.) but if you blow through abilities in every fight, you’ll run out of Ki and that’s hard for a Monk. They are very dependent on that resource.

Pick this class if you want to master all four elements, and have the right technique for any situation.

Monks on the Path of the Kensei are consummate fighters. They are capable of dealing damage at range and up close. They are a little more resilient than most monks as well, with their agile parry giving them a little extra defensive benefit above and beyond the normal Unarmored Defense. With extra weaponry available to them, the Kensei expand the somewhat limited arms available to a normal monk, and help you hold the front line down.

Pick this class to become a master swordsman/archer, with a focus on defense. 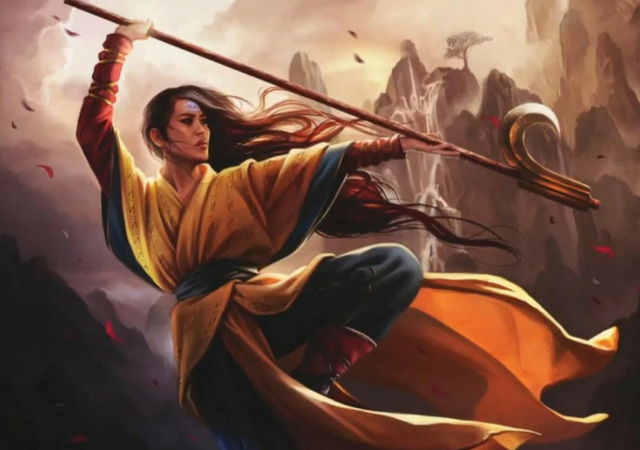 Way of the Open Hand Monks have some powerful hand to hand techniques. This subclass is very much about battlefield control and dealing with a powerful foe. With open hand technique you’ll always have an effect that will help set your allies up for victory. Whether knocking opponents prone or depriving them off reactions, you can really dictate the flow of the fight with these characters.

Pick this class if you want to take control of even the most epic fights with your martial arts prowess.

Monks who walk the Way of Shadow are a stealthy blend of skill, finesse, and escape cards. They are consummate sneaks, and if you want to always be assured of getting in places you don’t belong, the Way of the Shadow is the way for you. Easy access to invisibility and/or other stealth enhancing skills come in handy, especially with your ki abilities. You’ll always have the drop on at least one enemy before you have to rest up and recharge.

Pick this subclass if you want to pass undetected info the heart of any enemy gathering and leave none the wiser.

Finally, those monks on the Way of the Sun Soul are radiant blasters–they take the close up fighting game power of a Monk and transform it to a ranged sort of combatant who’s just as mobile, and capable of keeping themselves alive.

Pick this class if you want to blast your enemies with sacred fire.