The latest addition to Privateer’s Mini-Crate collection is here!

Alten Van Helsing, the monster hunter that strikes fear into the heart of creatures of the night. He debuted at Lock & Load last year during the keynote. Designer Nate Feyma takes us through the process…

My first drafts of Alten is below. As this was my first MiniCrate model, I began by leaning pretty heavily into Alten Ashley’s look, adjusting his gear to be more suitable to a vampire hunter—stakes, lanterns, and the like. Somewhere between drawings A and B, someone had the bright idea to replace Bucking Jenny with an enormous crossbow, which I loved:

We were satisfied with a lot of elements in these initial sketches, but they just didn’t feel fully realized yet. Matt took a look at them and produced a sketch that felt a lot more interesting to us (and in fact turned into the eventual pose for the model itself). I then took this sketch, pulled in a few more elements that we all liked (the stakes on the belt, for instance), and sent off version E for our Lock & Load presentation. 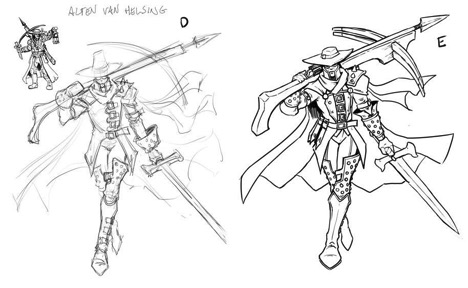 That was the last I saw of Alten for a couple months while we worked on other, more urgent models in the pipeline, but I knew he’d be back! When it was time to get him ready for sculpting, my first pass was a fairly straightforward cleanup of my rough sketch from earlier. 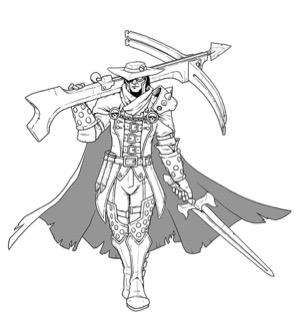 We agreed that he was pretty close but that we could do more to make him a bit more engaging. To that end, I did another pass and added more details to his bow, cape, and sword. With colors provided by the illustrious Ainsley Yeager, we were done at last! 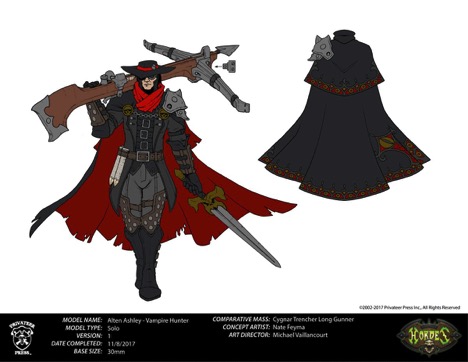 Subscribe by April 19th to add him to your collection!

Author: Mars Garrett
Pop culture editor and writer that has been on the BoLS team since 2010. Contributor on the One of Us podcast. Marvel, Vertigo, and dystopian sci-fi fan. Enjoys bad movies, amazing stunt performances, and the internet. Hates rom-coms. (she/they)
Advertisement
Miniatures Privateer Press Tabletop News
Advertisement