This one is going to be a short(er) one since we’re going to be primarily focused on the use of HQs.  One thing’s for sure:  I feel that we have some fantastic melee HQ options for the price.

Here are some my favorites so far:

Let’s start with the Archons.  You’ve all probably seen me take the Archon with Cunning and Writ of the Living Muse in my lists.  That’s because it’s one of the most powerful Warlords in the game for the points IMO.  Cunning is absolutely fantastic at regenerating CPs whenever a CP is spent for both you and your opponents. 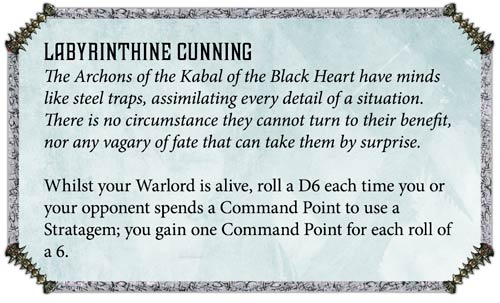 For DE, I find that some of our Stratagems are a little costly, especially that Agents of Vect counterspell that costs 3 just by itself.  With Cunning, you can do some really crazy recycling that can help you sustain the longer gameplan:

When you play Black Heart, you almost have to bring Writ of the Living Muse.  It’s one of the best buff batteries in the entire game and enhances the damage potential of every single Black Heart unit within 6″.  Everything within this distance gets re-roll 1s to Hit and Wound that that is a huge damage amplifier, especially on things like Dark Lances and Disintegrators when you absolutely need to hit with your more expensive damaging weapons.  Living Muse simply gives you consistent damage and that’s exactly what you need to turn your very good shooting up a notch to exceptional. 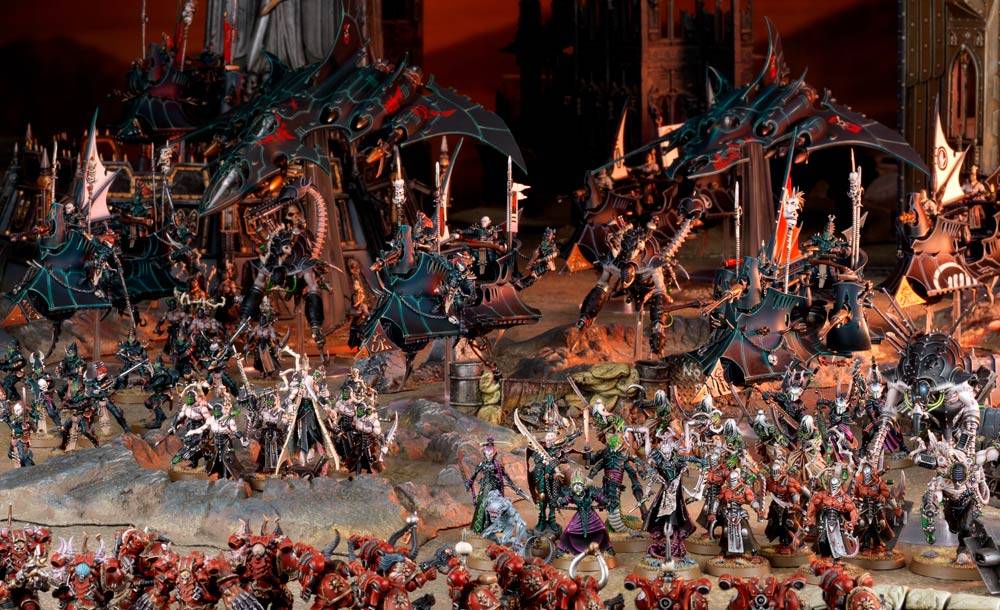 As for melee Archons, I see two main options here:  Both of which have the Djin Blade of course which is just an upscaled Huskblade.  Hatred Eternal gives you more consistent results via re-roll all wounds in melee but the Famed Savagery Archon from Flayed Skull gives you great burst damage.  With Famed Savagery, you have 8 S5 AP-3 D3 attacks that hits on 2s with re-roll 1s.  Personally, if I was to pick one of the two, I would go for more consistent damage with the Hatred Eternal Warlord trait.  There are bonus points in the fact that Hatred Eternal is a generic WL trait and thus doesn’t lock you to any particular Obsession.  As for arming the Archons further, always seek out the Blaster first since you have a fantastic BS2+ and Blasters are amazing with their S8 AP-4 D6 damage from 18″ (24″ for Obsidian Rose). 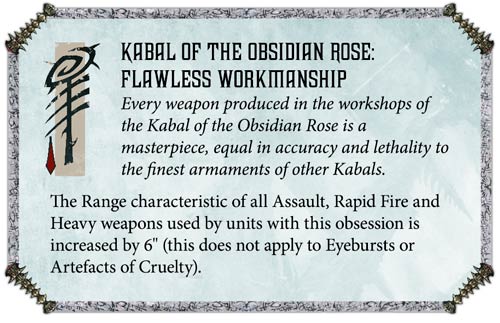 The Succubus went from one of the most overcosted units in the entire game to arguably the most cost-efficient melee blender in the game.  I’ll start off by listing the Blood Dancer variant that comes with 9 attacks hitting on 2s, re-rolling 1s, and each Hit roll of a 6 turns into 3 Hits instead of 1.  On the regular, she can throw out something like 14 attacks with an Agonizer (Poison 4+ AP-2 1D) and that’s just obscene.  Against single wound models, she is almost guaranteed to wipe out entire squads by herself.  She just reminds me of the Blenderlord that I ran for Vampire Counts back in the days of Fantasy.  To make things even more exciting, once you hit Turn 3+, you can activate these multiple hits on a 5+ instead of 6 because of the PFP chart.  The only downside here is that she’s a Succubus and she just explodes if anyone swings back at her because she only has a 4++/6+++ with T3 and 5 wounds.  Regardless, LOOK at her points cost!  For 54 points, she’s an absolute steal. 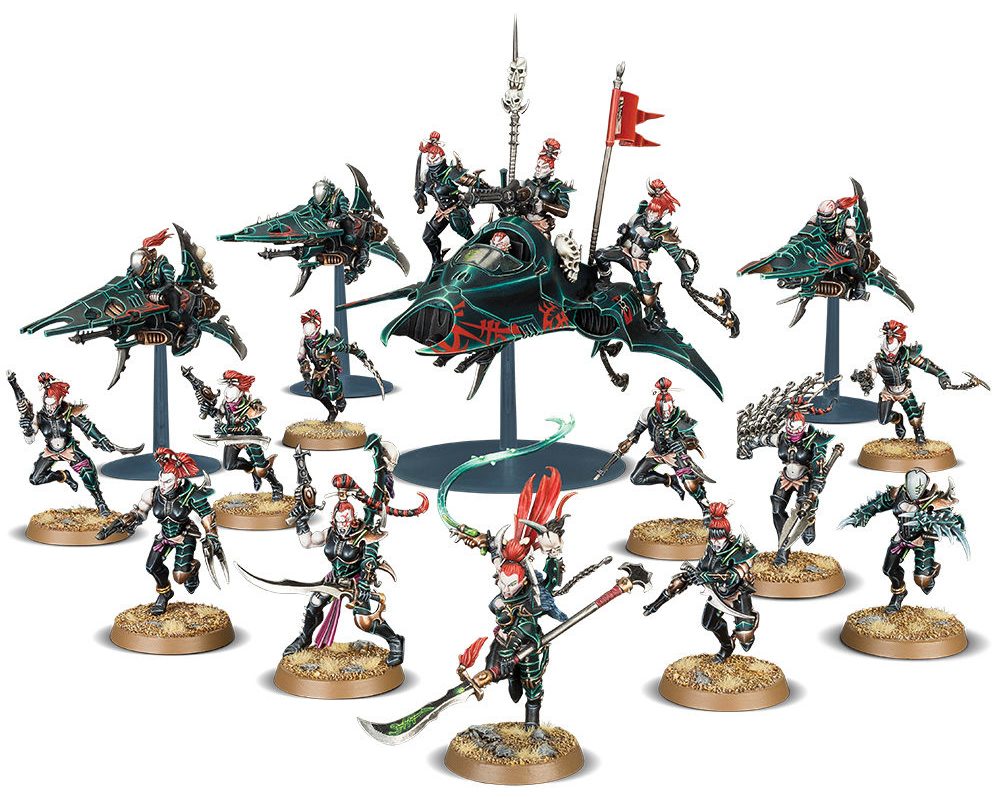 Other variants of the Succubus are also really strong; such as the Blood Glaive Succubus with 5 attacks with Adrenalight dealing S6 AP-3 D3 damage attacks.  I’ve seen this particular variant built two ways really; with either the Red Grief specific WL trait of 3++/5++ vs. shooting or with Stimm Addict with Grave Lotus and Adrenalight.  This gives her 5 attacks at S7 which is now a serious threat to virtually all targets including light vehicles.  Again, 54 points of awesome.

Another variant I want to introduce you to someone who might be our best duelist.  She has 9 attacks with the Whip just like the Blender because she’s from Cult of Strife (for +1 attack), however instead of Blood Dancer, she has the Precision Blows WL trait.  When you’re hitting with 8-9 attacks every turn, you’re going to be looking for 6s that can just do straight mortal wounds in addition to the regular wounds inflicted with an Agonizer.  That’s very good.  For all these Succubus, I highly recommend taking a Blast Pistol on the Blood Glaive Succy to take advantage of her superior BS2+.  Funny enough, the Precision Blows Succubus can still do mortal wounds to Vehicles and Titans. 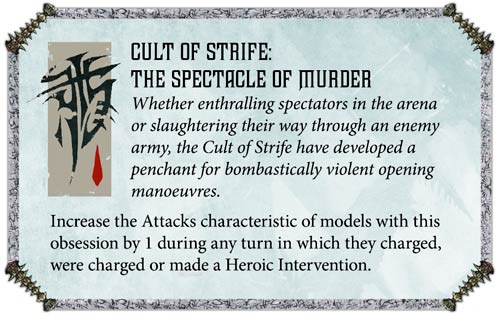 Lastly, we have the Haemonculus that you will probably see most frequently if you’re planning to take Coven units and Alliance of Agony for 1 CP.  This is because Diabolical Soothsayer essentially pays for itself immediately and you can get 2 more CP if you roll well (D3 in total).  Sure, you also get that once a game re-roll for your Warlord, but no one really cares about that because you also gain access to the Vexator Mask.  This thing is actually pretty hilarious.  You can basically take this Haemonculus and just charge into something to tie it up because they cannot use Overwatch on you.  You can then charge your Wyches into them for free without any fear of OW fire.  To make things even more enjoyable, the mask also gives an enemy unit with 6″ of the Haemonculus ‘Always Strike Last’ essentially, making them strike last after all other units have gone int the Fight phase.  That’s just funny considering the amount of melee boss HQs we have in the Codex.

What are some of your favorite HQs to bring?  I know I’ve been extra boring with the Black Heart Archon, but hey, it’s been working so why not!

40K Tourneys: The Judge is Always Right (at that moment)