Warlocks are bastions of Eldritch Power. With access to one of the best cantrips in the game and a host of powers that often refresh with a short rest, they are one of the more sustainable classes for adventuring. Come see the secrets of their power–and the price they pay.

Warlocks have an innate gift for the eldritch and the weird. With powers that flow from otherworldly beings–be they Fey, Celestial, Fiend, or…something else entirely–they mix the marvelous with the mundane. Their dark bargains earn them all manner of powers–making them one of the more customizable classes in the game. Between the Eldritch Invocations and Spells, they’ve got a host of abilities to call on to deal with their foes… and their friends.

Playing a Warlock is a Blast

One of the best tools at a Warlock’s disposal is, of course, their Eldritch Blast. This is hands down the best combat cantrip in the game, allowing you to make multiple attacks against one or more targets. But Warlocks do more than just shoot eldritch lasers at their foes. Sometimes they stab them with blades forged of pure magic or empowered by the dark magics of their pact with their otherworldly patron. There are three primary roles that you can see Warlocks filling. Dealing damage is one of the easiest things for Warlocks to do. With Eldritch Blast they can hit from safety and dole out damage comparable with the brawlers in the party. As well they can take spells to help them increase their damage.

But speaking of spells, the other thing Warlocks are surprisingly good at is: having the right tool for the job, especially since most of what a Warlock does refreshes off of a Short Rest. With your Eldritch Invocations (as mentioned) you can really customize what you do. Whether it’s being able to blind foes with Darkness (though you can see), or to be good at talking to people, or creating illusions–you can get a lot of utility out of your Eldritch Invocations. Especially with Xanathar’s Guide to Everything in the mix. 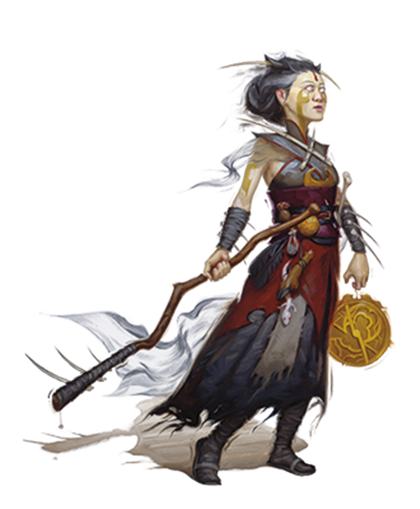 The other thing Warlocks can do surprisingly well is act as Brawlers. The Bladelock is a popular build–people love the idea of fighting with a magic sword, and the only way you get Gishier is if you multiclass into Eldritch Knight. Warlocks are a class with a lot of customizability. Your Pact Boon skews you towards spellcasting or fighting–and there’s no end of tricks you can pull off. Warlocks are the class to pick when you want to pull off all kinds of weird shenanigans.

Their subclasses add a little focus to the mix. The subclass is an interesting phrase here since the subclass is represented by the pact you made with an Eldritch being beyond the ken of mere mortals–but they dole out benefits that kind of shape what kind of Warlock stuff you’ll be doing most often.

The Archfey is a capricious, powerful, and alien creature from the Feywild. Warlocks who bargain with these creatures for power are exceptionally good at either locking down a single target with spells like Dominate Person and the Dark Delirium ability or for battlefield control with things like Plant Growth or Sleep.

Pick this subclass if you want to beguile foes left and right, or enjoy teleporting on occasion.

Warlocks who make a bargain with a Celestial find themselves better able to support their party–though theirs is a curious kind of support. Celestial pact Warlocks have healing, and some of the bonus spells they have on their list can help buff the party–but where Celestials really shine is up near the front line. With their extra resilience and the ability to rise from 0 hit points in an explosion of radiant light–they want to be around enemies. They are a decent anchor and are a Paladin’s best friend.

Pick this subclass if you want to blend battlefield control and support in an interesting, and action-oriented idiom.

Fiends are a classic source of Warlock power. And Warlocks who bargain with devils find themselves a very regal and commanding presence. They’re excellent at dealing damage, especially with their Hurl through Hell ability, but can hold their own against many weak foes (since as they hew down foes, they reap temporary hit points), and are capable of using mental control to lock down powerful opponents. A very well-rounded subclass all in all.

Pick this subclass if you want to do a little bit of everything. But especially damage.

Lurking in the darkness between the stars, Great Old Ones offer Warlocks who touch their twisted minds and risk their very sanity powers beyond mortal comprehension. Which, precisely translated means adding a number of utility spells to the Warlock’s list, like Clairvoyance and Sending, or heavier hitters like Evard’s Black Tentacles and Telekinesis.

Pick this subclass if you want to be a hub of information and secrets.

Hexblade Warlocks are Gishes through and through. They are all about using magic to buff their melee. They get heavier armor, access to more weapons – and are great if you Pact of the Blade, because, duh. They excel at dueling single targets, with their spells aiding them in isolating and focusing down a target and reaping benefits, including their souls at the time. Very fun class to play. There’s a reason “help me build this bladelock” is a common thread on any D&D Forum these days.

Pick this class if you want to dart around the battlefield, slicing and dicing your foes like something out of Dishonored.

At any rate, that’s the Warlock. A powerful class with a lot of flexibility and sustainability. They are capable of shaping themselves to fit whatever the party needs or defining themselves in a party of Warlocks–either way they are worth a shot no matter what kind of character type you want to play. They’re one of the more 5th Edition of 5th Edition classes. Next week, Wizards. Who may or may not be of the Coast.

Okay, but what do you do when your Otherworldly Patron decides they need their metaphysical gutters cleaned? Just thought of a new quest…