Wrath & Glory is the gripping up and coming Warhammer RPG system from Ulisses North America. This week we have an inside look at the system from one of the RPG industries best creative minds, talking about design inspiration and character elements!

I had the pleasure of meeting Ross Watson over a gaming table when we were both guests at Tacticon a few years back, and we have kept in touch ever since. Ross regularly comes to Austin for Chupacabracon, a local RPG and Tabletop convention the is a Mecca for game designers across the USA. Ross will be joining the BoLS RPG crew on May 2nd to Game Master an exclusive One-Shot session in the Wrath & Glory universe, and this week we are going to learn more about the system he has spent so much time building. 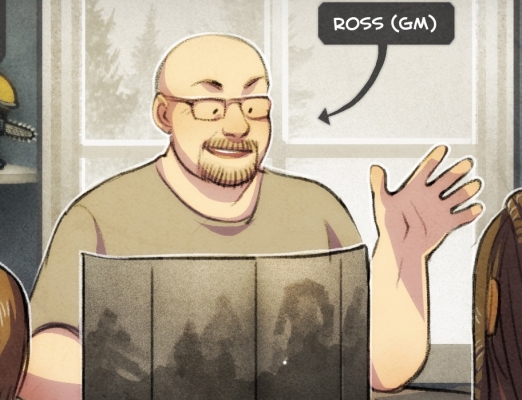 -What’s your role in the Gaming industry? Who do you work for?

I’ve been involved as a professional in the gaming industry for over 18 years now. I’ve been designing rules and stories since I started learning to love games, which was quite a long time ago! I was mostly freelance up until 2008 when I went full-time as a game developer.

-How did you get your start in gaming? What inspired you growing up?

I got started with lots of regular games; Sorry, Monopoly, Battleship – but things really took off when my dad bought me the “red box” of Dungeons & Dragons in the early 80’s. All of a sudden, gaming became a huge part of my life from then on.

I was inspired by a lot of books I was reading—mostly fantasy and sci-fi novels—some of which are classics now, some that definitely aren’t. I read a TON of gaming-related fiction (like, ALL the Battletech books), plus things like Heir to the Empire. I was also an anime fan growing up, so things like Robotech and Bubblegum Crisis were also very influential on me.

-What are your favorite systems to play? What Character Archetype do you enjoy playing the most?

The character archetypes I enjoy the most are usually the “face,” or the “support” characters – sometimes I do enjoy a good paladin or cleric as well!

-What developers, writers, creators inspire you the most?

Mike Pondsmith is one of my greatest inspirations – he’s the guy behind Mekton Zeta, Cyberpunk 2020, and a ton of great video games as well. Jordan Weisman is another inspiring game designer and Ed Stark. Writers: William H. Keith, Jr. is a huge inspiration, as are newer writers like Drew Hayes, Marshall Ryan Maresca, and Scott Sigler. Creators in general? I’m always inspired by great artists—especially my friend Alberto Bontempi, Karl Kopinski, Kia Asamiya, and many more.

-What are your favorite finished projects?

My favorite finished project is probably Accursed, my dark fantasy setting for Savage Worlds. It’s basically “Solomon Kane meets Hellboy.” Some of my most popular projects are probably Star Wars: Edge of the Empire, Savage Rifts, and Torg: Eternity, plus all the Warhammer 40,000 Roleplay lines from Fantasy Flight Games.

-What conventions/events can we find you at this year?

April: I’ll be at Starfest in Denver!
May: I’ll be at Chupacabracon in Round Rock, Texas, and then Koboldcon in Colorado Springs!
June: I’ll be at Origins in Columbus, Ohio!
August: I’ll be at Gen Con in Indianapolis, Indiana!
September: I’ll be at Spa-Con in Hot Springs, Arkansas!

-What projects are you working on now? What’s coming in the near future?

Currently, my biggest project is Wrath & Glory, that’s taking up all my free time! We do some really cool stuff planned for the future—such as the Imperium Nihilus campaign—and I’m also devoting some time to work on that as well. 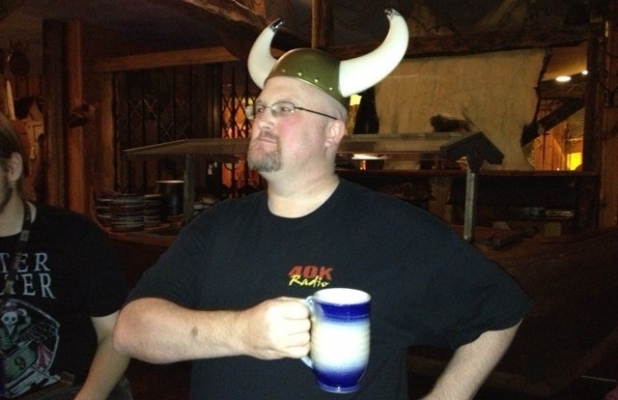 -How long have you been working with GW?

I’ve worked with Games Workshop many times now, first as part of the US White Dwarf team from 2003-2005. After that, I worked with their licensing team to build the Warhammer 40,000 Roleplay lines at Fantasy Flight Games, then again on projects like Dark Millennium Online, Regicide, and Battlefleet Gothic: Armada. So, all told, about 15 years now, off and on!

That’s a very tough question! I started out playing Eldar, but I’ve been a huge fan of Space Marines (the Storm Wardens Chapter, of course!), the Astra Militarum, and the Grey Knights. Don’t make me pick just one! 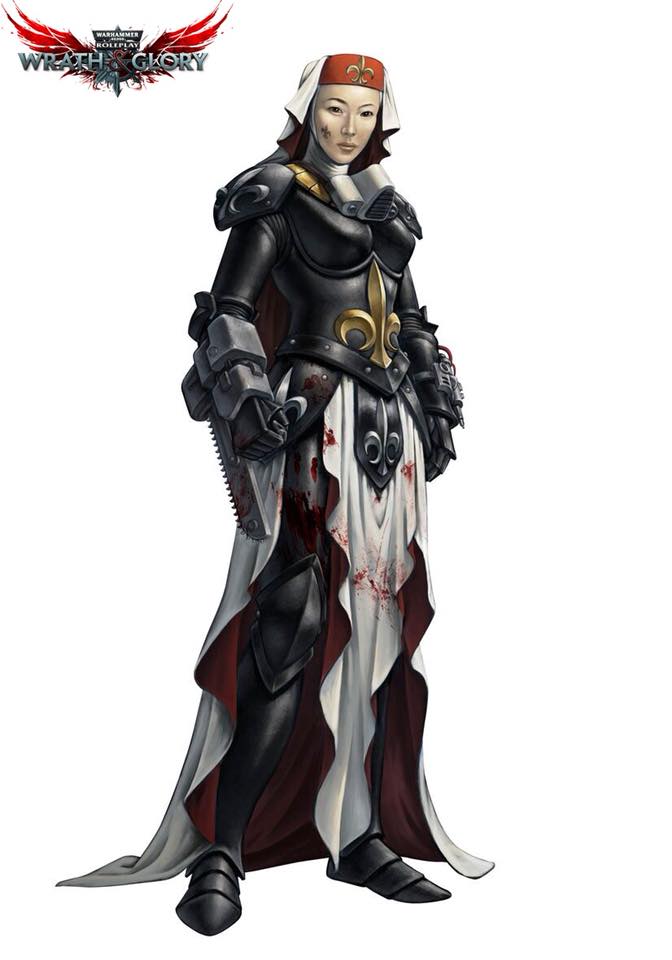 -What can you tell us about the beginning of the Wrath & Glory Journey? Give us some history.

This all began in 2017, when Ulisses Spiele got the license for Warhammer 40,000 Roleplay. I was already working with them on Torg: Eternity, so it was a natural fit to talk to them about a new 40K RPG. I knew that I didn’t want to just do the same things that had been done before, and Ulisses North America was very supportive of taking the game in a new and exciting direction. I’m very excited about Wrath & Glory since it is a brand-new design and a very different approach to roleplaying in the 41st Millennium than what had come before. In addition, the new events of the Dark Imperium made this a perfect time for heroes to make a difference in the grim darkness of the far future.

-What kind of a system should we expect? What is its greatest strength?

Wrath & Glory uses a d6 dice pool system for its main task resolution mechanic. The strength of a dice pool approach is that it can easily scale up and down—important when Warhammer 40,000 has such a wide range of possible encounters! 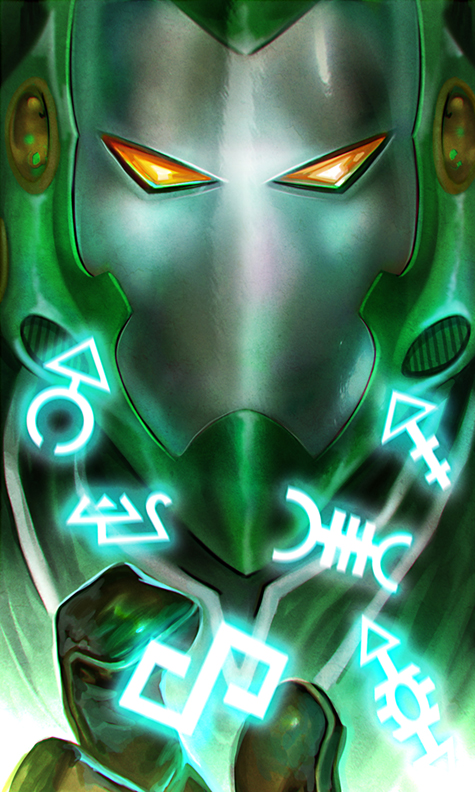 -What are your favorite mechanics of the system?

One of my favorite bits of Wrath & Glory’s system is the Wrath Dice – this is a special d6 included in any pool that is a test (meaning there is a difficulty number you’re trying to hit in terms of total “icons” or successes). The Wrath Dice has special effects if it rolls a 6 or a 1, regardless of whether the test succeeds or fails. There are some special abilities that trigger off the Wrath Dice result, and it has a way to give us “Yes, but…” and “No, and…” results that expand the dice’s effect on the narrative of the game.

-What kind of characters and races should we expect from Wrath & Glory when it comes out?

Well, the core rulebook has four distinct species in it: Adeptus Astartes, Humans, Orks, and Eldar. There are 32 different archetypes as well; these are iconic roles your characters can take on from the 41st Millennium. There are too many archetypes to list them all, but some of the most interesting ones include the Imperial Commissar, Eldar Warlock, Ork Nob, and Rogue Psyker. 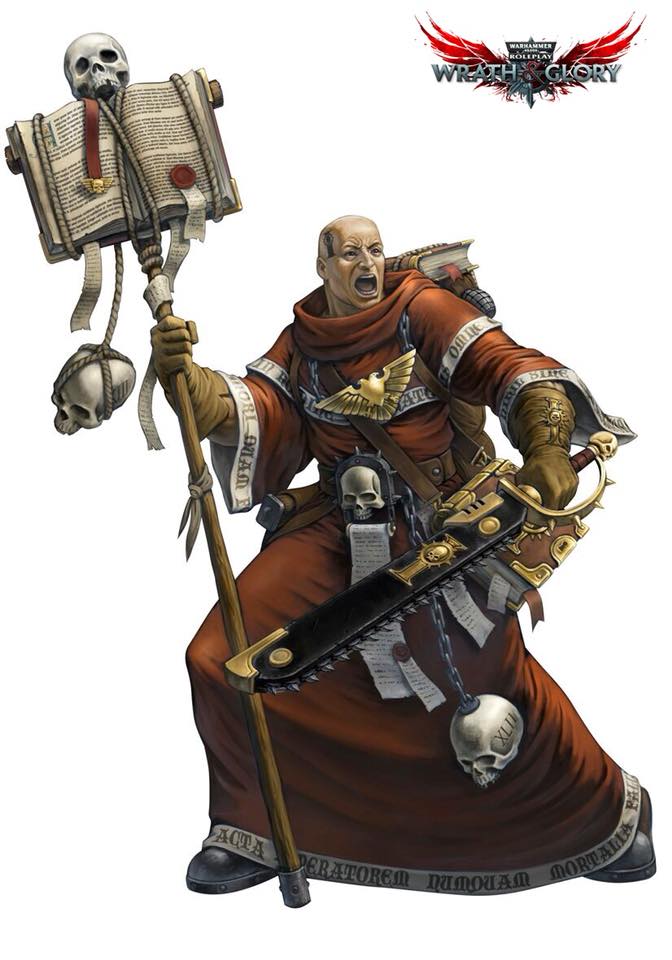 -Are there plans for expansions, modules, new characters?

Of course! We’re already working on the first expansion, the Imperium Nihilus campaign set. It’s going to feature a linked series of adventures, new player character options, and a closer look at the Gilead system, a region of the Dark Imperium where many wheels are turning…

-What is the main story arc of Wrath & Glory? What’s going on in the Universe?

There’s a lot going on in the Dark Imperium – the galaxy’s been split in half by a giant warp storm, a new Eldar god has awoken, one of the Primarchs has returned, and much more. For Wrath & Glory specifically, we’re set in the Dark Imperium where countless worlds are under threat – it is a place where often only a warband of heroes can step in and make a difference. Aaron Dembski-Bowden has written up a very interesting piece of the Dark Imperium called the Gilead system, a place that is brimming with adventure, a region of space where the Cicatrix Maledictum has caused all kinds of carnage and woe—and some strange exo-planets have emerged on the fringes of the system. 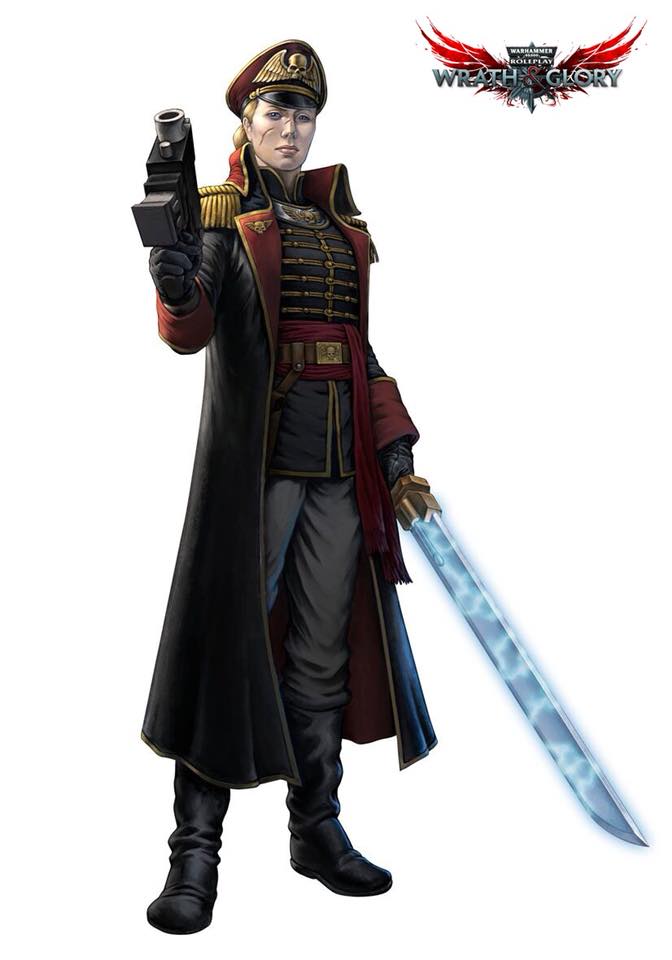 Probably my favorite character to work on is the Imperial Commissar – I’ve loved the archetype since I first got involved with 40K as a fan back in the 90’s. My favorite parts of the system would likely involve our rules that help people play games at multiple power levels or Tiers, and the rules that let characters of lower Tiers improve (or “Ascend”) to take part in a higher-Tier campaign.

-When will we be seeing Wrath & Glory played?

Our first public games are being held at Origins Game Fair this year! 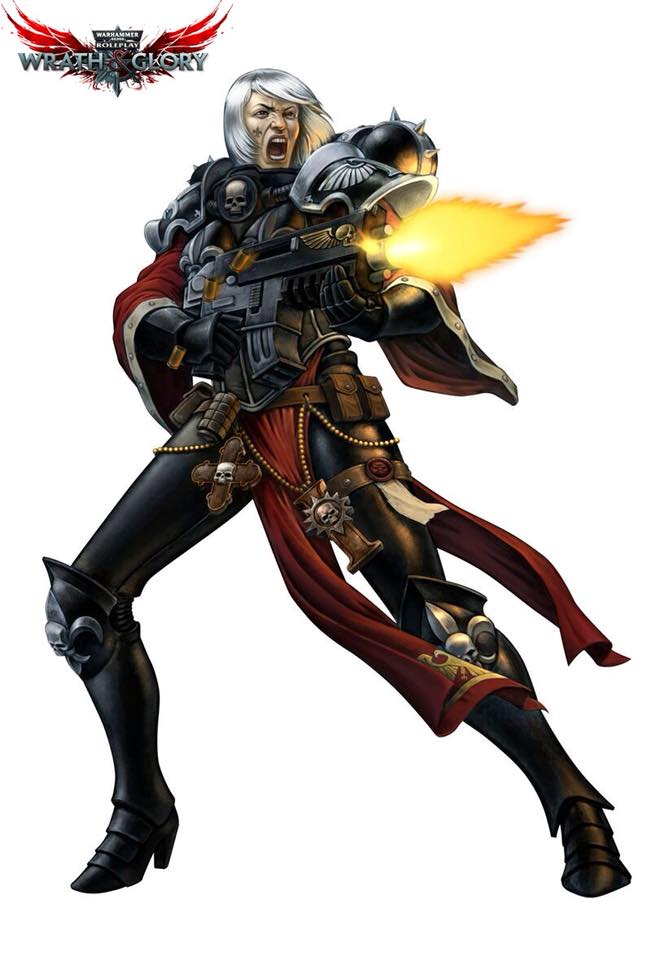 -Let’s talk about the art style. What artists are you working with?

We’re working with a lot of artists! I’ll just name a few here (because I can’t remember all of their names): Alberto Bontempi, Florian Stitz, Diego Gisbert Llorens.

-Who are the other members of the Wrath & Glory team? What’s the hype?

I created a designer diary about our team! Just to name a few: Wendelyn Reischl, Aaron Dembski-Bowden, Andy Smillie, Owen Barnes, Stephen Rhodes, plus many more. 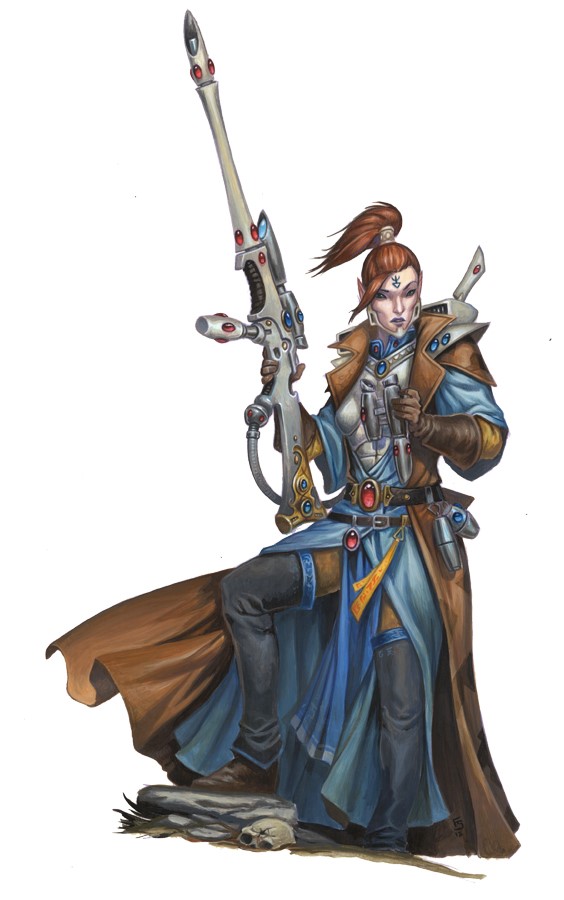 -What is the biggest goal for Wrath & Glory as a system? How is it different from other RPGs?

My biggest goal for Wrath & Glory was to make the game experience feel like 40K. We did a lot to reach for that goal, from the brutal critical hits to the iconic archetypes to the campaign cards that tie into important themes and tropes. I think Wrath & Glory is different because it approaches 40K from a broad rather than narrow perspective, offering multiple ways to play the game—from lowly Imperial Guard or Inquisitional Acolytes all the way up to veteran Space Marines and Inquisitors.

-Where can we find you on Social Media? What are the other relevant links?

Ulissesnorthamerica.com is where you can keep up with all the latest news about Wrath & Glory!

Author: Jennifer Larsen
Jennifer aka "Mayhem's Muse" is the Cosplay Editor for BoLS and manages Ad Sales and Communications. Her cosplay awards include the RTX Judge's Choice Award and Dragon's Lair Austin's Cosplay Symposium. Jennifer has been a Cosplay Guest Judge at RTX, Tacticon and Genghis Con in Colorado. She regularly attends conventions to cover cosplay for BoLS. Her cosplay work has been featured in publications such as Girls Who Love Monsters, Geek Fuel, and Renaissance Magazine. Jennifer has modeled in the Her Universe Fashion Show, Precision Camera's yearly Precision Camera University, and has taught several workshops for photographers about partnering with cosplayers and creative muses/models. Jennifer is a lifelong enthusiast of retro video games and loves Dungeons & Dragons, urban fantasy, tabletop games, VR technology, and historical archery. She has set National Records through USA Archery’s Traditional Division for Asiatic Bows and earned 4th Place in the World Nomad Games in Kyrgyzstan in 2018 for Women’s Korean Archery. Jennifer is currently studying for her Masters's Degree in Organizational Leadership.
Advertisement
Game Design Games Workshop RPGs Warhammer 40k Wrath & Glory
Advertisement