The Deathwatch have more than a few instances in their codex where things go sideways for them…and they don’t always bounce back. We’ve also got some lore hints of what else is on the horizon as well.

One of the fun lore-mines to dig into whenever we get a new codex is the ‘timeline’ section. There are always juice lore tid-bits to chew on and many of these sections also point to the direction the game is heading or what could be coming next. Today, we’re looking at three sections that jumped out at us and they have some surprising news. 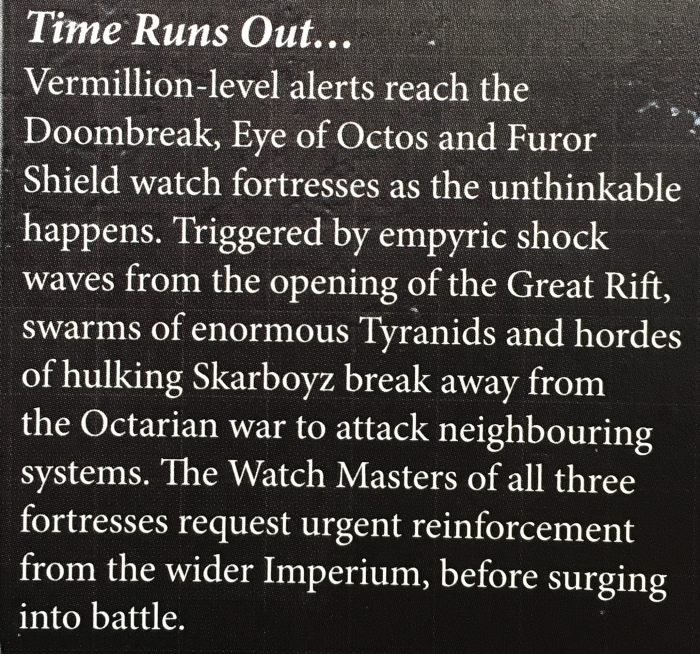 The Octarian War is one of my personal favorite wars in all of Warhammer 40,000. Also called the “Octarius War” this war has been raging for several editions of Warhammer 40,000. It’s a fight between the Orks and the Tyranids and it’s a battle on ALL fronts. In some editions of the game, the Tyranids actually ended up winning – but that was before the Great Rift made everything all timey-whimey.

This latest piece of lore illustrates the worse-case scenario of Kyrptman’s Gambit. He was betting on the two factions facing off in a never-ending stalemate. The ultimate risk was that which ever side won the conflict would become something even scarier as the ‘new’ apex predator. What he could not have foreseen was something distracting the two forces and causing them to leave the conflict.

There are now Warharded Skarboyz and Tyrannic Killers juiced-up on Ork bio-mass heading for the Imperium at large. This does not bode well for the rest of us… 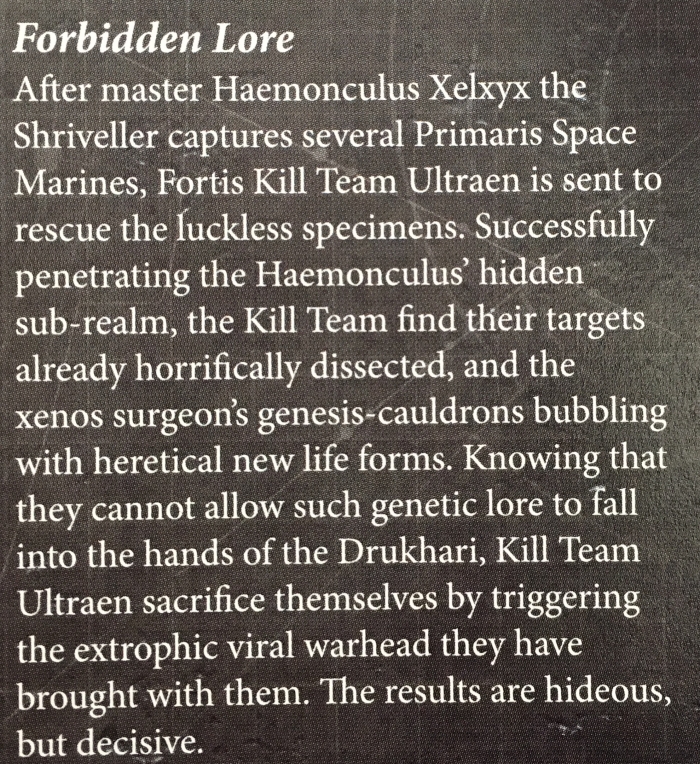 The Drukhari have been busy. We learned in their book they made a twisted version of the Imperial Throne. In the Deathwatch book, we’ve learned that the Haemonculus have been experimenting on Primaris Marines with…interesting results. While the Deathwatch Kill Team was able to destroy the “heretical new life forms” there is no telling what else the Drukhari learned from their experiments.

This revelations is clearly pointing to something the Drukhari are brewing for the Imperium. First they make a twisted Golden Throne and now they are dissecting Primaris Marines…that cannot be a coincidence. Then again, they do have a thing for torture. Whatever they have planned, it’s not going to end well.

The Return of Ghaz 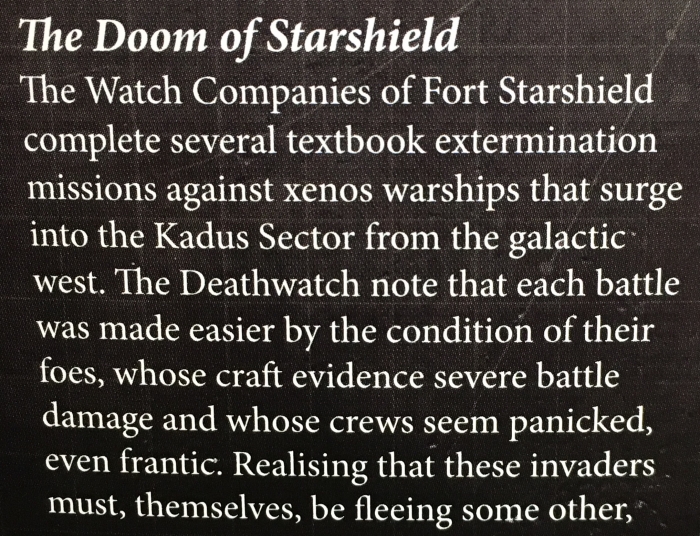 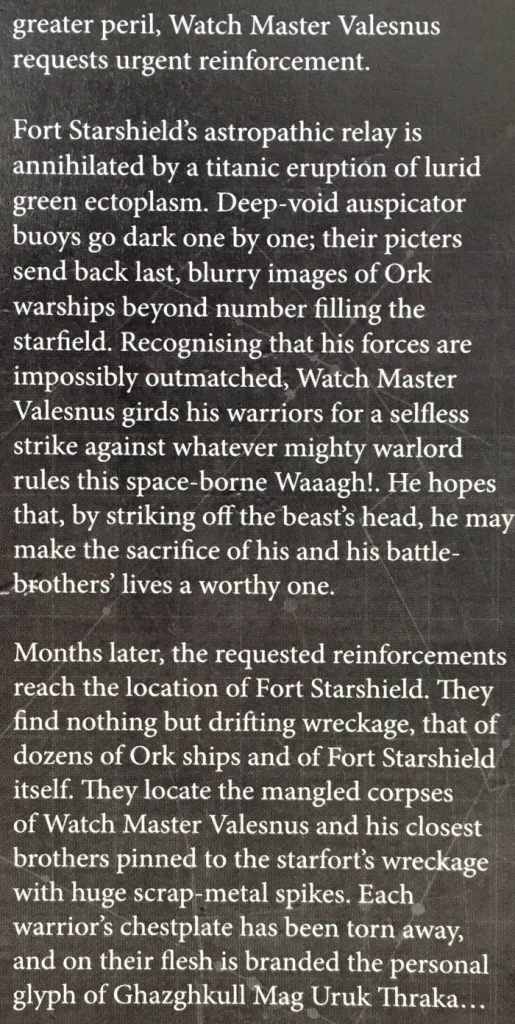 Okay Ork fans if the news of the Octarian War didn’t get you excited for the impending Ork Codex, I sure how this news did. Ghazghkull Mag Urk Thraka is on the warpath and he is nigh unstoppable! When you combine this (relatively) lengthy snippet with the rumors we’ve heard about Ghaz’s return, it’s hard not to imagine what is on the horizon.

I think the Warboss is on the way and he’s bringing da’Boyz!!!!

Druhkari, Tyranids and Orks are shaking things up in the Deathwatch Codex. These snippets are just the tip of the spear, too. Games Workshop certainly looks like they are moving the story forward and all of these hints point to even more Grimdark Developments coming our way… and I can’t wait!

Deathwatch: Witnesses to the TRUE Xenos threats. What do you think is going to happen as the 40k narrative pushes forward?

Author: Adam Harrison
Writer, Editor, Texas Native, and Austinite for 15+ years, Adam covers all things Tabletop Gaming. Which includes Warhammer 40,000, Age of Sigmar, D&D, Board Games and everything else that involves dice, boards, cards and a table. A hobbyist, player, and collector of miniatures and games, Adam's current obsession are his Death Armies for Age of Sigmar, his Blood Angels and Tyranids for 40k, and his ever growing Arkham Horror: The Card Game Collection.
Advertisement
Deathwatch Games Workshop Lore Tabletop News Warhammer 40k
Advertisement

GW Really Wants You To Enter The Golden Demon 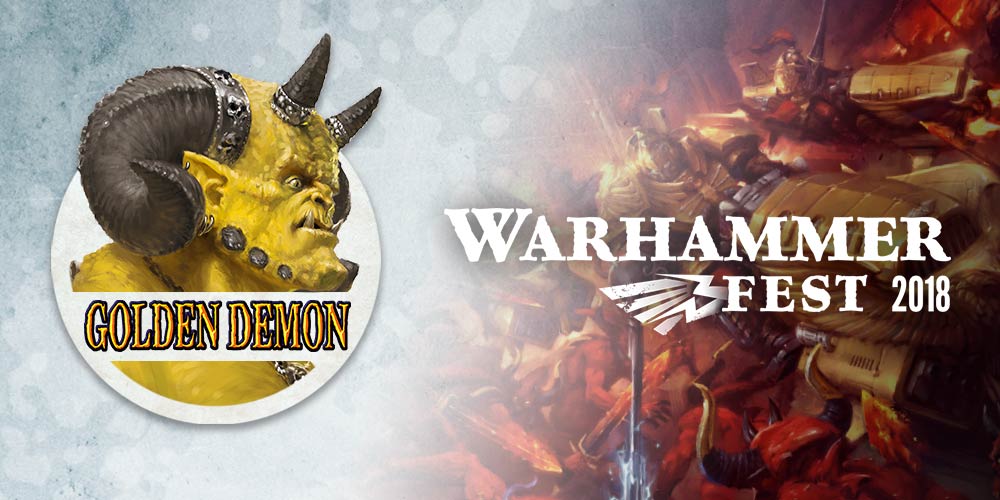