40K Op-ed: On The Fence About Harlequins

The new Harlequin codex is out and I’m very conflicted about the Followers of Cegoragh. Here’s why.

Right now, I don’t think Harlequins are looking too good from a competitive standpoint.

Before I completely put them aside, I want to note that I there are a few things that Harlequins bring to the table. They can have some interesting options that no one else can really pull off. For example, Soaring Spite lets your army  move 16″+6″ and still shoot with 6″ Fusion Pistols without penalty for 28″ threat range. This awesomeness simply cannot be ignored.

Similarly, if you take Faolchu’s Talon for your Soaring Spite Warlord, you can move an additional 6″ in your movement, and when you blow up, nothing happens. No explosion, no models dying, you just roll out of your drive-by mobile and find another joyride to blow people up in. This is great and all, but it’s also very niche. Even their big fancy Webway Gate wants me to drop multiple Talos or a fat unit of Grotesques out of them instead. 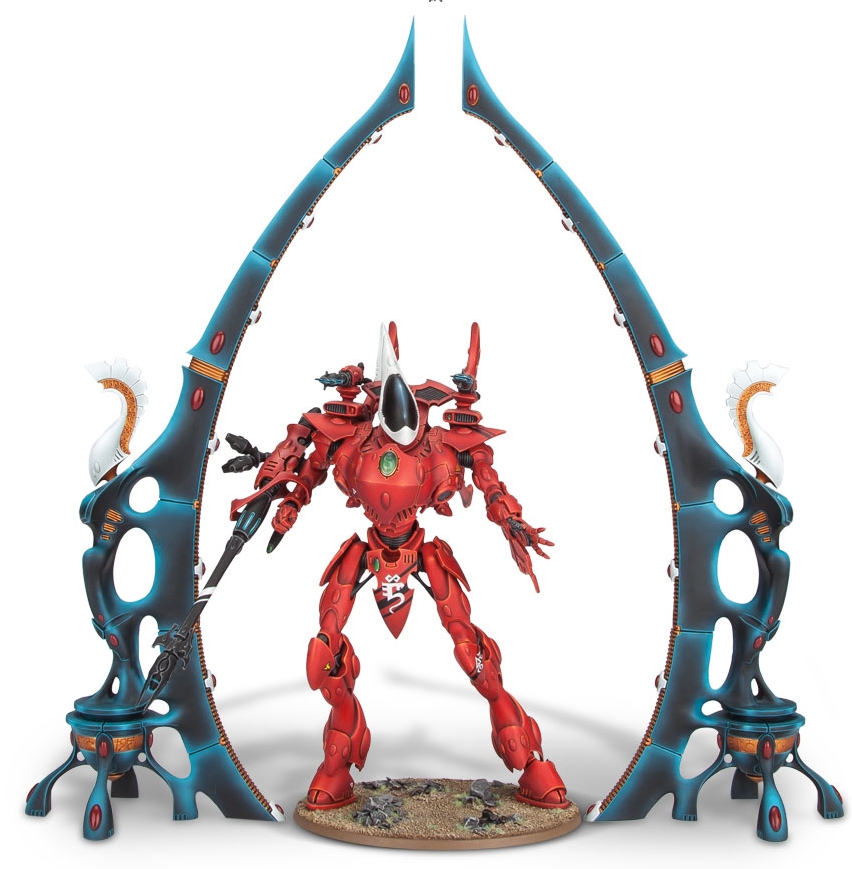 The biggest problem in the army is its resilience. Harlequins are comparable to melee Horrors: they’re melee-based units that cost a ton but still have the same statline as those little pink dudes. You have an army of 1W T3 4++ melee Horrors that desperately want to be relevant in a meta filled with resilience and anti-alpha.

Toughness 3 is a real rough place to be right now, especially for an army that wants to have any kind of survivability. Sure there’s a 4 up invulnerable save, but with only a single wound, they’ll get absolutely murdered by almost any type of shooting. Even below-average melee units play much better in attrition simply because of the points. Harlequins are great if you think that killing MEQ with 3+ for almost 30 points is great. You know what else is 30 points? A Grotesque, and it comes with so much more resilience because a single Grotesque can be T6 with 4 wounds and 4++ with FNP. Speaking of 4W, this is actually much bigger than people realize. It takes 2 D2 shots to kill, out of kill scope of D3 weapons, and makes D6 weapons very nervous.

It’s pretty much the sweetest spot for being infuriating at 30ppm. And against MEQs, a Grotesque does just as much damage but can stay alive much longer vs. almost any kind of shooting and any kind of melee. In fact, Harlequin melee stopped being relevant ever since stronger alternatives came out: Genestealers, Grotesques, Dawneagle Shield-Captains–even Wyches are better for the points if you want a melee option.

Attrition matters and Harlequins play the game the worst out of all the units in the game. Every other army that wants to be in melee does it better for the cost. For me, since I play Dark Eldar in a very shooty manner, why bother being in melee if you can shoot them to death from far away? My T3 5+ AS with an FNP Warrior that cost 6 points is looking a lot more cost-effective next to a 28-point Harlequin with a Fusion Pistol and an Embrace. You are essentially paying a premium for a luxury that’s not needed.

Arguably the best Form in the book.

This brings me to match-ups. Their unit choices are limited already, but what you pay for is a unit that’s not very durable but has a ton of bad match-ups. If you run into a Tyranid list with a lot of Genestealers for example, you know for the points that you’re going to fight an attrition battle that you’re not going to like. If you’re fighting a lot of Gaunts, forget about it because you already lost the points game here (anything with Fearless is a nightmare for you). God forbid you to run into a unit of Wyches, or even worse, a unit of Grotesques.

A canny opponent is just going to spread out his line so he sets up kill zones for your units afterward (why Midnight Sorrow might be pretty decent). IG carparks are going to be super annoying and so are most armies with cheap armor and plentiful shooting. I feel very confident with my pure Kabal army vs. any army that takes a decent amount of Harlequins for example. When you bleed expensive models, your firepower and melee threat goes down a ton. That’s one of the reasons why I prayed to the dice gods that GW was going to give the army -1 To Hit all-around. Alas, this was not to be.

Harlequins are points-prohibitive. What I mean by this is that you need to pack anti-tank in any competitive list as well as being a threat in melee because that’s what you’re taking Harlequins for. The army, in general, is bi-polar. If you want them to be a strong AT threat, you take Fusion Pistols. If you want them to be a big melee threat, you mix up Caress and Embrace. The problem is that they both go on the same model and when that model dies, he takes both of those upgrades with him.

They both cost a good deal of points on an already expensive model to begin with which is why they have such a problem with attrition.

Too Much, Too Little

So what am I getting at here? It means that if you put a lot of points into Harlequins, you need them to be a decent standalone force. But if you need them to be standalone, which means you need your points to also give you the ability to kill tanks and infantry, then you’re simply increasing the cost of each Troupe unit.

Taking a deeper dive: For 500 points, I can buy a Black Heart Spearhead with 3x Ravagers with Dissies on all of them. What do Dissies do? They can pretty much wreck anything because this buys the army 27 BS3+ S5 AP-3 D2 shots that can threaten GEQ, MEQ, multi-wound, single-wound, high-armor, whatever, you name it. And that’s not counting access to Agents of Vect, Living Muse, Cunning, or FNP on all your vehicles.

In comparison, Harlequins need to be up close with Fusion Pistols, then you need to be in combat to get the most out of them. To get in, you have to brave the Overwatch, hope none of your 28 point models die, roll to get in, and then you can really shine. With Grotesques, you just push models forward and results happen. With Ravagers, it’s the same way, but you don’t need to commit because you’re 36″ away from your target. With Harlequins, it’s all risk, and I hate risk. And so do most competitive players. 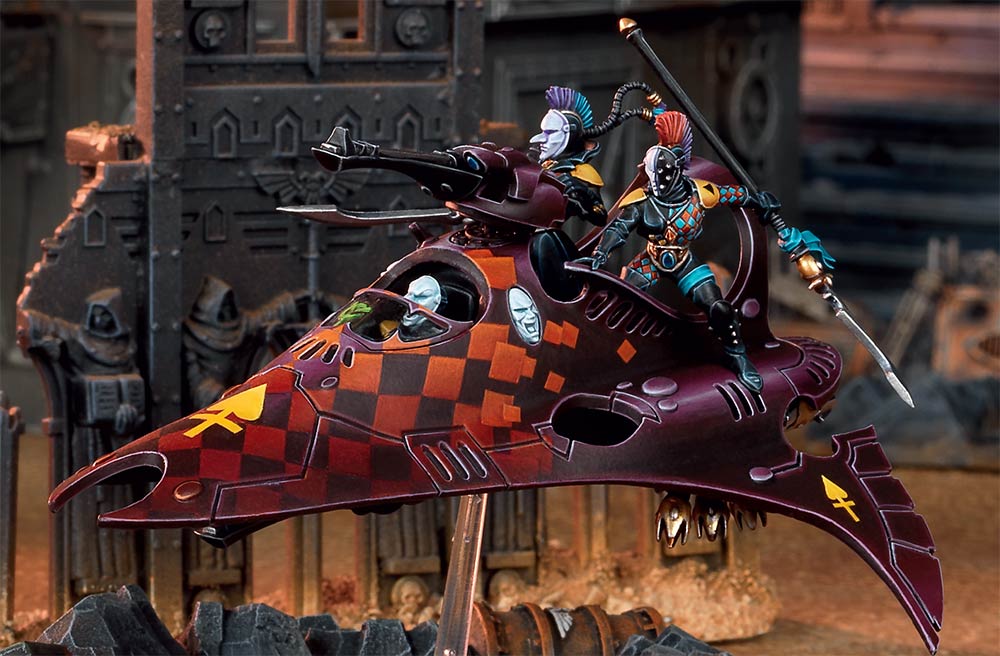 A common theme within competitive armies is that they’re consistent in their performance. Just look at some of the discussions around Harlequins being a competitive threat. It always starts with: Oh first you take this, then you do this, then you cast this, then you play this Strategem, and then you shoot and lel you embark back in your transport! Yeah, that’s nice, but I play Prophets of Flesh and my entire army has 4++. That’s what consistency looks like and that’s why it wins games. That’s why Meat Mountain is doing so much work right now.

I really hope I made some solid points here. Don’t get me wrong, I own a ton of the little clowns and I love them to death, but they’re definitely more of a fluffy choice than a competitive choice for me. There are just too many good unit choices out there that makes army building with them difficult. I know, I’ve been trying to design a good army list with Harlequins/DE and/or Eldar for the last couple of days and it’s mind-boggling.

~When I have something good, I’ll show it off.