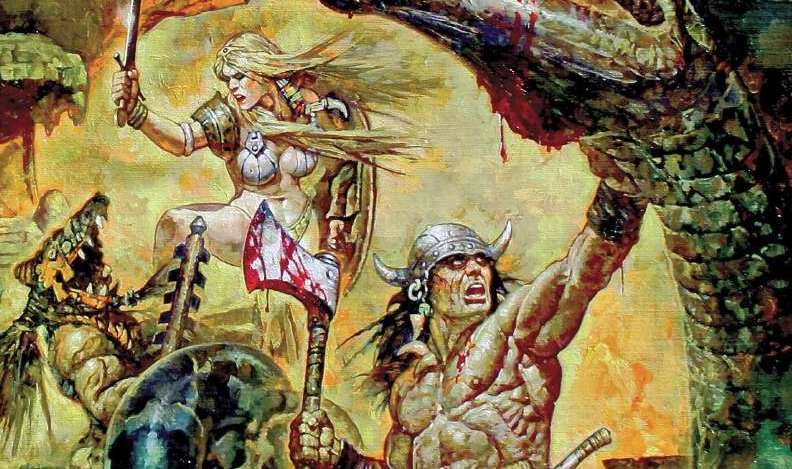 When you’re traveling in the footsteps of Conan, you’re bound to cross paths of ruined cities and ancient curses. The new supplement from Modiphius is the perfect guidebook to bring those adventures to the tabletop!

It’s time for some high adventure in some really messy places with the new Conan: Ancient Ruins & Cursed Cities supplement. Watch your step and try not to go home with any unfortunate side effects…

Modiphius is pleased to announce the PDF release of Ancient Ruins & Cursed Cities, a brand new supplement for the Conan Adventures in an Age Undreamed of RPG.

Conan Ancient Ruins & Cursed Cities is available from Modiphius.net as part of our Conan Collection, and DriveThruRPG.com  and here’s the details on the latest thrilling adventure in the Hyborian Age. Welcome to the Ruins!

SOMEWHERE IN THESE PRIMITIVE FORESTS WERE THE RUINS OF AN ANCIENT, ACCURSED CITY, MEN WHISPERED, AND AMONG ITS TOMBS SLUNK GRAY, ANTHROPOMORPHIC SHADOWS…

The Hyborian world in the time of Conan teems with remote and forgotten places, brimming with danger and secrets. Ancient Ruins & Cursed Cities is the ultimate Gamemaster reference for bringing these crumbling ruins and remote locales to life in Robert E. Howard’s Conan: Adventures in an Age Undreamed Of.

Descriptions of famous ruins from Conan’s adventures, including Kuthchemes, Alkmeenon, and the ruined city along the Black Coast where Bêlit met her fate.

New places inspired by the writings of Robert E. Howard — including the Nameless City, the mountain resort-city of Kamula, Lemurian and Atlantean ruins, and other settings from before the Cataclysm — as well as locales from the Cthulhu Mythos stories of H.P. Lovecraft such as R’lyeh, the City of the Old Ones, and others.

Doom and Momentum spends specific to these locations, and story seeds to inspire gamemasters in craft ing new CONAN adventures.

A ruins generation system allowing gamemasters to create their own ancient ruins and cursed cities. Write-ups of diabolical and powerful entities such as ka-ghouls; the servants of Bit-Yakin; nightmare mounts; Thugra Khotan; and Gyatha, Master of the Black City.

Rules for exploring and moving through ruins, dodging traps, and environmental effects to avoid.

Treasures of renown such as the Teeth of Gwahlur, the Dagger of Derketa, the Staff of Epemitreus, and others, as well as a treasure hoard generation system and new item qualities.

Developed with leading Conan scholars, this book explores the lost and fallen locales of the Hyborian Age, providing gamemasters with the tools to create their own memorable environments

We hope you enjoy this latest Conan supplement, which joins recent PDF releases like Conan The Pirate and Conan Nameless Cults, and look out for more great Conan RPG releases, heading your way soon!