In Depth Look at ‘Twilight Struggle’ 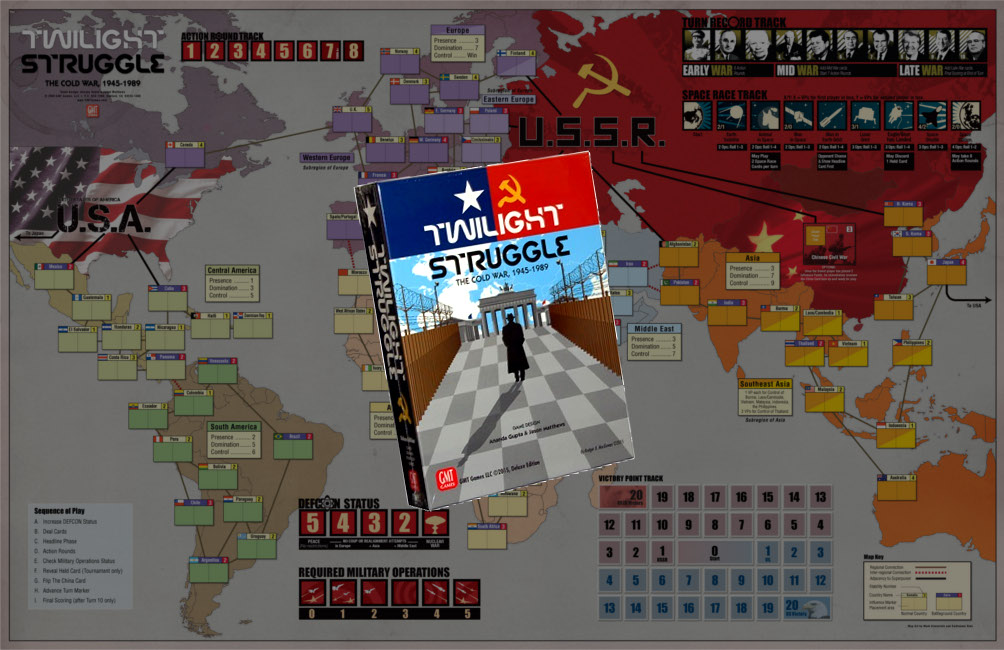 Twilight Struggle is a game that looks overwhelming, but for as complicated as it appears, the depth and strategy this game offers don’t come at the cost of being confusing.

According to my research things have existed for at least 150 years. Since the time that things have existed, some things have been better than other things and until we can learn to share, there must always be one thing that’s the best. For board games, the general consensus right now is that Gloomhaven is the best. However, that was not always the case. For a long time, the top dog of the board gaming world was Twilight Struggle. Since publisher GMT Games announced recently they will be making their first fantasy game, I thought this is as good of a time as any to take a look at what used to be the best board game ever.

Twilight Struggle is, at the core of it, an area control game. But it uses so many elegant and simple but hugely thematic and strategically deep mechanics it is no wonder it is still praised so highly by so many. 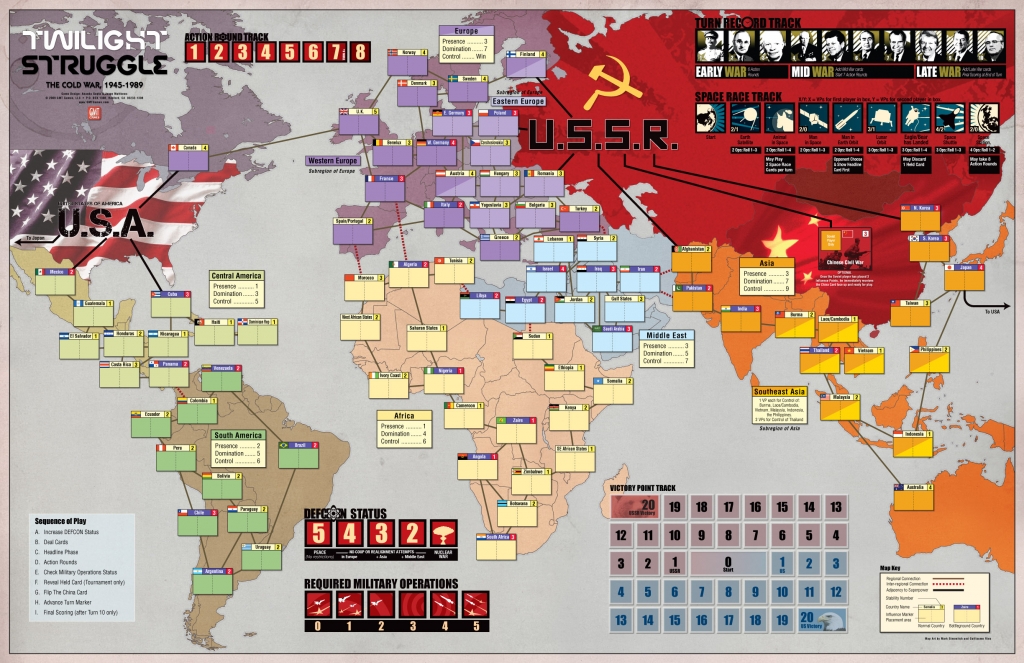 While the game looks very daunting at first, Twilight Struggle is a pretty easy game to learn. There are admittedly a fair number of minute rules, but the core gameplay is fairly straightforward.

The cards players have in their hands can be used in a couple different ways. The most common way a card is played is for it’s Operations Value or for its card effect. Every card is noted as being a card for the USA or for the USSR, or neutral cards. When a player plays a card for its Operations Value, they gain a number of influence equal to that value. 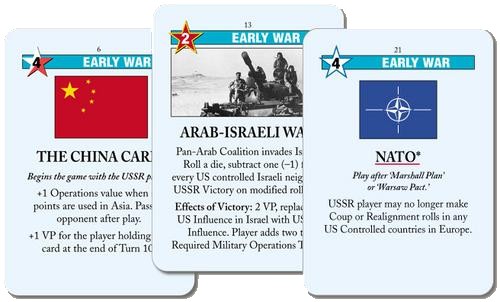 However, players are drawing from the same pool of cards, so they are likely to have a hand mixed with their own cards and their opponent’s cards. Players can play cards from either side, however, if they play an opponent’s card, the opponent gets to use the card’s special effect, which always benefits that opponent. So it’s a careful consideration of balance and timing of trying to use risk assessment to minimize the benefit to your opponent when each of those cards are played.

This is wholly the core of what draws people to Twilight Struggle. It’s right there in the title. The struggle of having these cards in your hand and needing to play them but knowing that if you do, it may help you in one area, but ruin your plans in another. There is such a back and forth of power in this game that simply can’t be found elsewhere. 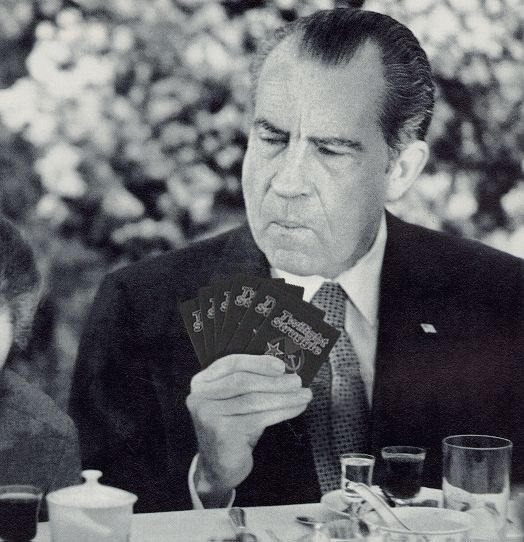 On top of all that, the game doesn’t use Victory Points in the same way other games do. Rather, they use the tug-of-war style of scoring where both players ‘share’ a score. While this doesn’t directly impact gameplay all that much, really, it adds to the theme of the game. You’ll go through whole games where the first 80% of the game the score is still hovering around zero. 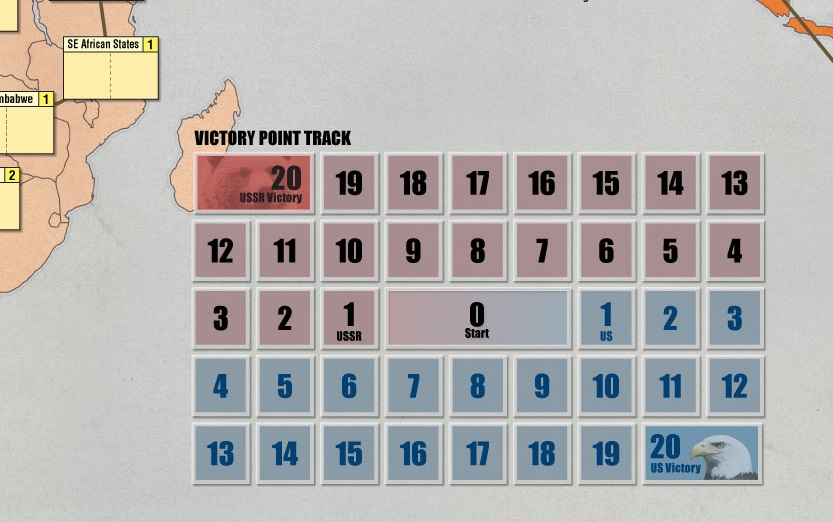 Rather than having individual score tracks, having them combined like this adds to the tension and drama felt within the game. It really seems like every single element of this game was so expertly crafted and designed to add to the gameplay and to the theme.

As I said previously, Twilight Struggle is an area control game and there are a lot of ways to try to gain ground. There are slow, methodical ways like using your Event cards to gain Influence tokens. However, you can also attempt whats called a Realignment, or if you’re feeling super aggressive, you can launch a Coup. In either case, the result ultimately comes down to a die roll, which can be modified by a well planned (for lucky) game state. A Coup is a much more forceful and risky option. Performing a Coup too often will begin to degrade the DEFCON status (which is bad). 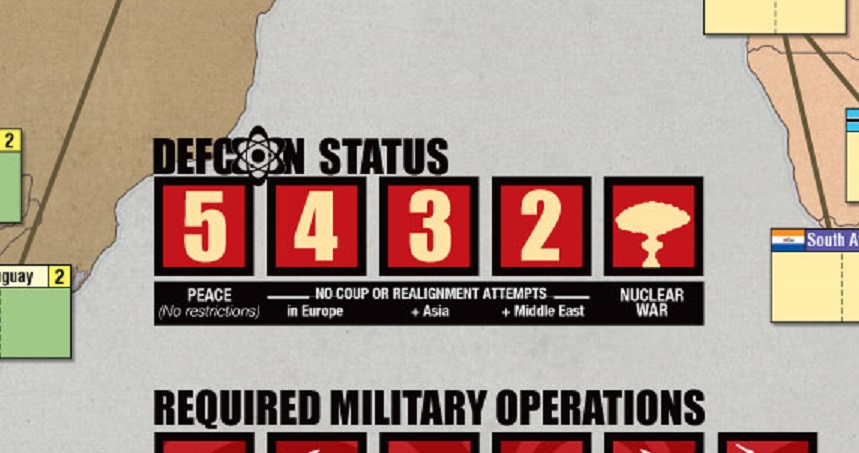 The DEFCON Status begins at 5 and will degrade throughout the game based on various game effects, including Coups or Event cards. If the DEFCON Status reaches 1, nuclear war has broken out and instead of becoming a fun post-apocalyptic and retro-futuristic world, in Twilight Struggle, the world ends and whichever player’s turn it is loses the game. 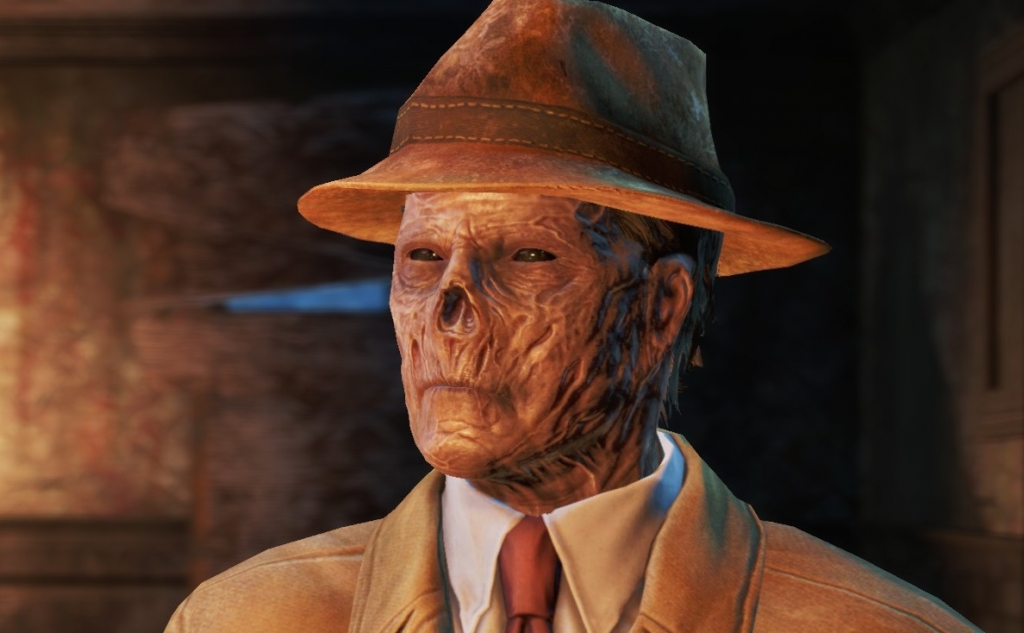 Players can achieve victory by reaching 20 Victory Points or by forcing a victory through Scoring Cards. These Scoring Cards must be played at some point during the round and in doing so, can score points for either side. However, in the case of Europe Scoring, if a player has full control over the region, they can win the game.

There are a lot of other ancillary rules to go over, but that’s the core of Twilight Struggle.

Why It’s So Great

Okay, I’ll admit I didn’t outline or rough draft this article. So, I got a little carried away and already hit on a lot of the key points as to why Twilight Struggle is such a great game. It’s a perfect blend of simplicity and complexity, theme and gameplay, and give and take.

On top of all that, GMT Games keeps up with the game and has released updated rules and FAQ and the community around the game is fantastic.  There are plenty of digital versions of the game on Steam, Android and iOS. Personally, I like the mobile Android version since I think it plays really well on a tablet. I think it would be tough to play on a phone. 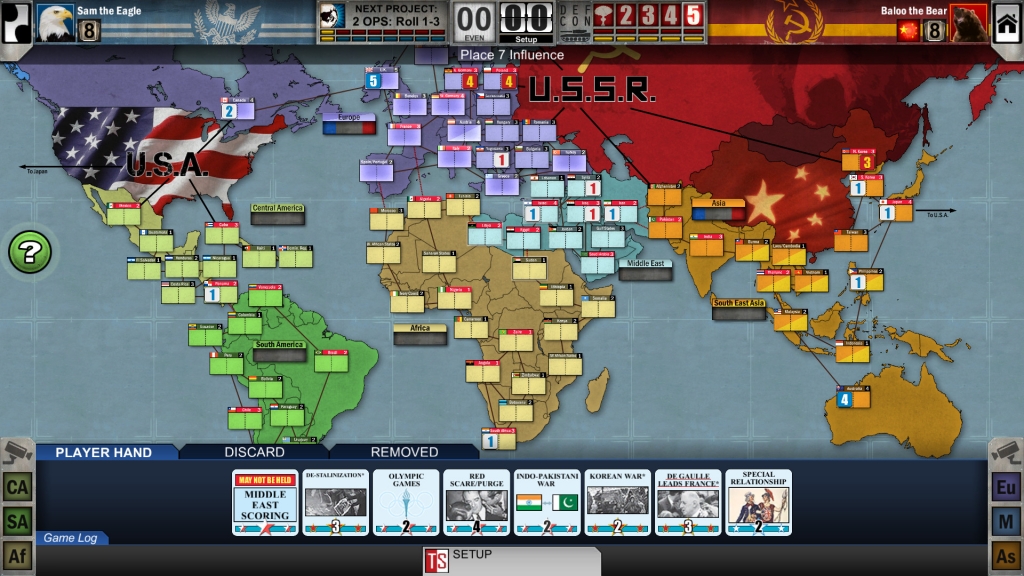 The one fault I will admit is that the game requires multiple playthroughs to get good and a first time player will have a real hard time winning, just from lack of knowing what cards exist within the game. That’s not to say they would be bad at the game, or they would never win. But knowledge of the game’s elements provide a huge benefit to the strategy.

I know I’ve been hyping this game up a lot, but I really do think it’s a fantastic game. If you’ve seen or heard of Twilight Struggle and been intimidated by the board (which is understandable), please don’t be. It’s not as nuts as it looks on the surface.