Privateer Press: Monsterpocalypse Is Out

Crush your cities, see them driven before you, and hear the lamentations of their buildings. Monsterpocalypse is out for Wide Release, take a look inside.

Monsterpocalypse is here with a monster release. Destroyers, Defenders, and enough expansion packs to keep you up to your eyeballs in units. There’s a lot to get through, so let’s get right to it. 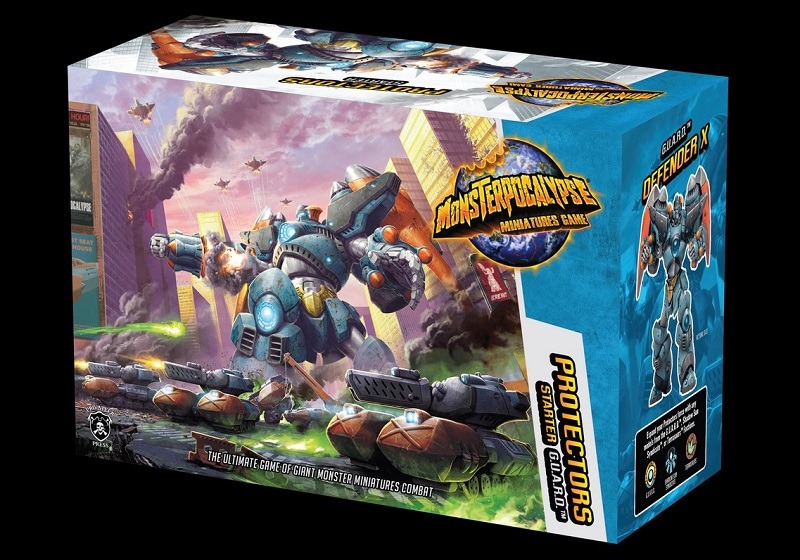 Unleash power on an unimaginable scale! Take control of a giant monster and its horde of minions and fight for control of your turf. Stomp the competition to dust as you slam, smash, blast, and brawl your way to victory in the biggest battle ever to hit your table in this all-new edition of the world’s best game of giant monster combat!

Globally United Advanced Research & Defense (G.U.A.R.D.) protects innocents from the horrors of the Monsterpocalypse. G.U.A.R.D. has assembled the greatest scientists and military leaders to develop the most advanced force the world has ever seen. Defender X is a towering marvel of technology piloted by a team of G.U.A.R.D.’s finest. A cadre of brave soldiers in cutting-edge military hardware protect civilians while Defender X takes the fight to the monsters threatening our world.

With everything a player needs to jump into the action of Monsterpocalypse, this set is where all players interested in playing the Protectors agenda should start. 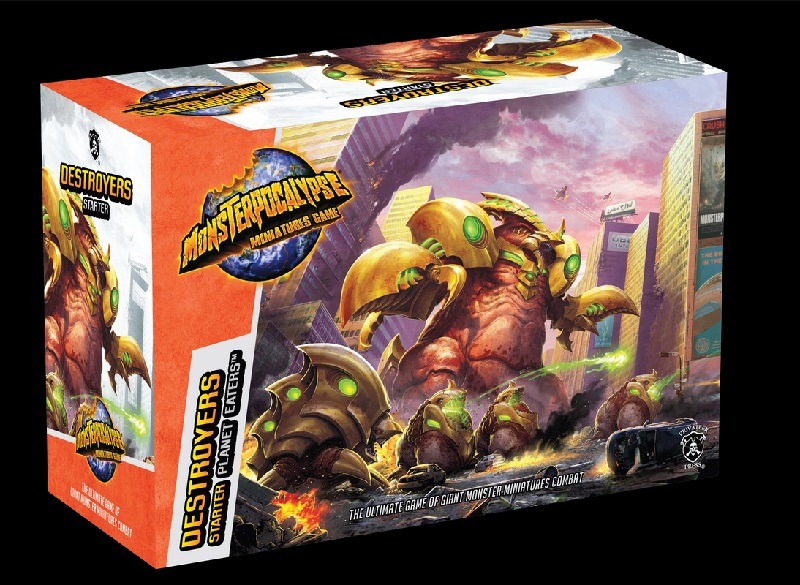 Devour everything in your path! Take control of a giant monster and its horde of minions and fight for control of your turf. Stomp the competition to dust as you slam, smash, blast, and brawl your way to victory in the biggest battle ever to hit your table in this all-new edition of the world’s best game of giant monster combat!

The horrors from space called the Planet Eaters are towering beasts of impenetrable flesh and glistening metal. Driven by the need to feed, they consume all who are foolish enough to stand against them. Gorghadra, a gigantic beast of armored plating and muscle, leads this ravenous horde. Parasites the size of small houses swarm in Gorghadra’s shadow, feasting upon the scraps that fall from the monster’s fanged maw.

With everything a player needs to jump into the action of Monsterpocalypse, this set is where all players interested in playing the Destroyers agenda should start. 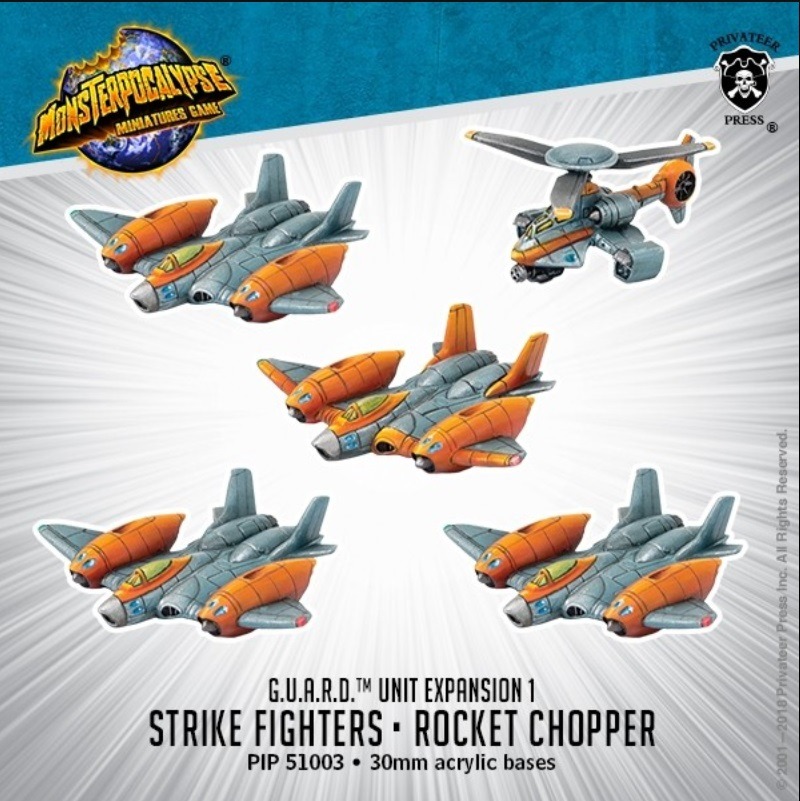 Shattering the sound barrier to arrive on the scene accompanied by sonic booms, Strike Fighters make up the air force of G.U.A.R.D. Each pilot is a fearless daredevil with his finger on the trigger of smart missile technology that can circumvent heavy cover. Rocket Choppers trade the raw speed of Strike Fighters for flexibility of engagement. Armed with rocket pods, they adroitly weave between buildings to shake off pursuit and dodge incoming fire while spotting threats for more powerful units to engage.

This blister pack contains G.U.A.R.D. airborne units to expand your Protectors force. Strike Fighters are highly mobile units capable of projecting power almost anywhere you need it in the city. The Rocket Chopper is a powerful support model that makes all of your other models more accurate when shooting targets near it. 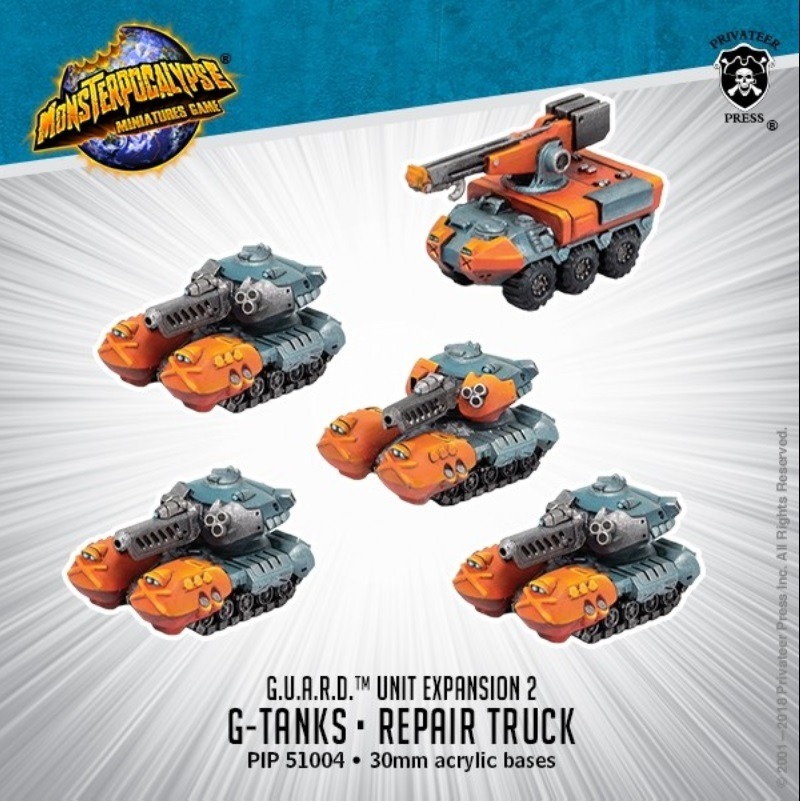 The G-Tank is a solid fighting machine that utilizes its sturdy tank treads to roll over any obstacle that would impair its movement. Repair Trucks crewed by skilled G.U.A.R.D. engineers wage an endless battle against devastation as they rush to restore crumbling structures and save the civilians within.

This blister pack contains G.U.A.R.D. ground units to expand your Protectors force. G-Tanks accel at holding territory and eliminating any enemy units that come within their ranges. Repair Trucks can extinguish fires—potentially protecting your monster from being thrown into them—and can return buildings to play. 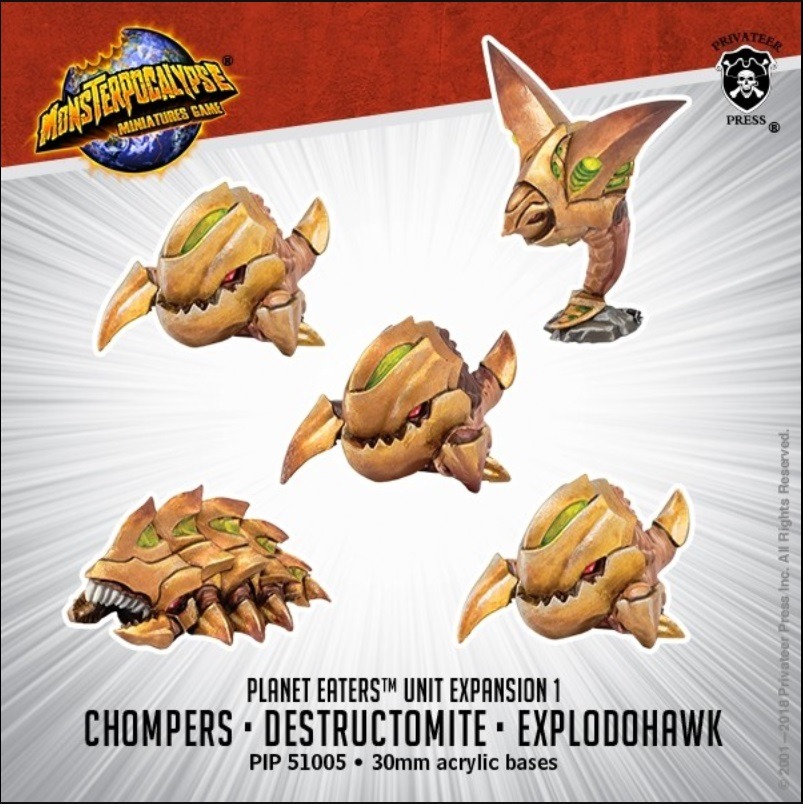 Chompers are simple but effective destroyers that function like mobile mouths, opening wide to eat entire armored vehicles and then channeling the energy of each meal to their greater masters.

Destructomites are insectoid horrors that converge on their targets to obliterate them in a wash of superheated energy. An enemy covered in gnawing Destructomites is easy prey for larger Planet Eaters.

The Explodohawk exists only to fly at its enemies and then unleash an all-consuming blast. Nothing in the vicinity escapes unscathed after it detonates with a spray of metallic chitin like a living grenade.

This blister pack contains a variety of Planet Eater models to expand your Destroyers force. Chompers are the main frontline units in the faction, empowering your monster as they eat enemy units. Destructomites are highly mobile support pieces able to go toe to toe with enemy units. Explodohawks are bombs with wings, capable of taking out groups of enemy units in a single attack. 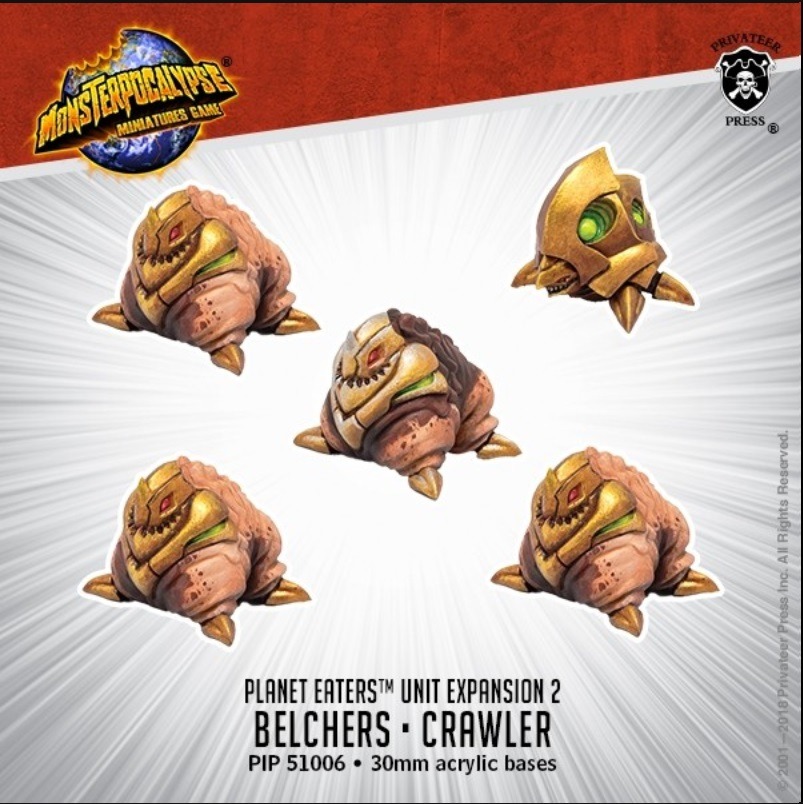 Belchers are rotund agents of destruction sent to intercept any of the fighting forces interfering with the Planet Eaters’ rampages. Capable of moving surprisingly quickly on their stubby legs, Belchers can spew out balls of flaming plasma like living artillery.

Crawlers are bug-like monsters whose saliva can melt earth and stone, and they are able to swim through the molten sludge they create. Suicidal and disposable, they retaliate to attack by exploding in a blaze of plasma energy, obliterating everything around them.

This blister pack contains Planet Eater models to expand your Destroyers force. Belchers are the primary ranged attacking units of their faction, capable of ignoring cover enemies hope to hide in. Crawlers are focused on holding objectives, with multiple abilities that make them very hard to dislodge once in place.

Which side will you take? Destroyers or Defenders?

Author: J.R. Zambrano
Bell of Lost Souls Staff Writer and DM, J.R. covers RPGs of all stripes and on occasion eats sandwiches. You can ask him about either at [email protected]
Advertisement
Monsterpocalypse Privateer Press Tabletop News
Advertisement