Arkham Horror: The Card Game’s latest Mythos Cycle is now complete with the release of ‘Shattered Aeons’ and it’s in stores now. Can you survive the Forgotten Age’s final chapter?

It’s no secret I’m a big fan of the Arkham Horror Files series of games from FFG. I love the new Arkham Horror: Board Game 3rd edition. And I’m an avid player and collector of the Arkham Horror: TCG. This week marks the release of the 6th and final Mythos Pack for Arkham Horror: TCG‘s Forgotten Age Mythos Cycle. This pack completes the story and journey that was started in the Jungles of southern Mexico, had players skipping through time, invading alien cities long forgotten, and facing unspeakable horrors along the way. It’s been quite a ride!

The final Mythos Pack of any Cycle typically also come with some pretty amazing cards for the players to use – it makes a lot of sense because ideally, you’ve been playing through the campaign and accumulating XP and this pack will be your last chance to spend it for that campaign. That said, these cards are pretty freaking strong, but so are the horrors you’ll face.

Card Preview – Arsenal of the Investigators

FFG has teased 3 new cards that are available in this pack and they are pretty game changing. If you’re running a Mystic Investigator, I’d like to direct your attention to one of the most useful cards you’ll be able to add. This is a capstone class card, but oh my is it worth it! 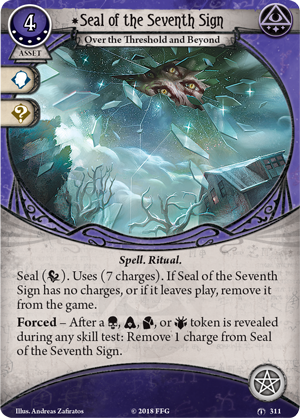 This card takes up a spell slot but it allows the Mystic to Seal the auto-fail token from the rest of the Chaos Bag. It has 7 charges and only loses charges when ever another “bad” token is pulled. That’s a trade I’m 100% willing to make. At minimum that’s 7 pulls where you don’t have to worry about the dreaded Auto-fail. Playing this at the right time will can save the day – or at least keep your hopes going that much longer. 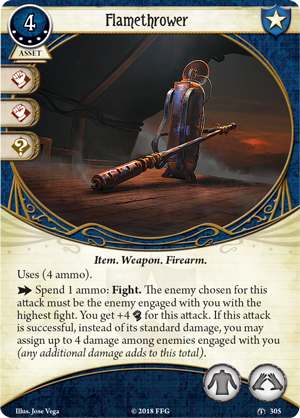 Guardian players, get ready to turn the heat-up with the Flame Thrower! Yes, it takes up BOTH hand slots and your chest slot (so kiss your other items good bye) but the trade off is a +4 fight attack! On top of that you get to spread the heat around which can help you deal with those pesky little guys – or you could just ensure that whatever your hitting stays down. By itself, this card has a potential 16 damage laying around. Toss in a couple damage boosts…you get the idea. 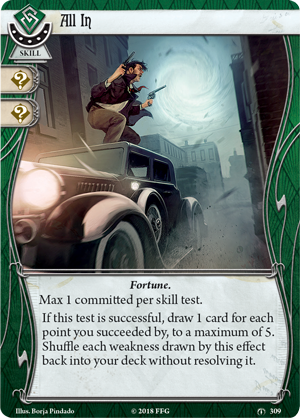 All In is a new Rogue card that will reward you for going – you guessed it – all in. When you commit this card to a check, for each point you succeed by you get to draw a card up to a max of 5 cards. On top of that, if you pull any weaknesses from your deck you get to shuffle those back into your deck without needing to resolve them. I like those odds!

Now, I’ve picked up my copy of this pack already and I can say that the Seeker and Survivor investigators got some great new toys, too. Seeker’s new capstone card allows you to just skip pulling tokens from the Chaos Bag entirely for a few goes! If there was a Mythos Pack that was a “must-have” pack, I feel like this pack is certainly in the running. Plus it’s the final chapter for the Forgotten Age cycle so, if you were a fan of the story and wanted to finish it up, you were going to get it anyways. 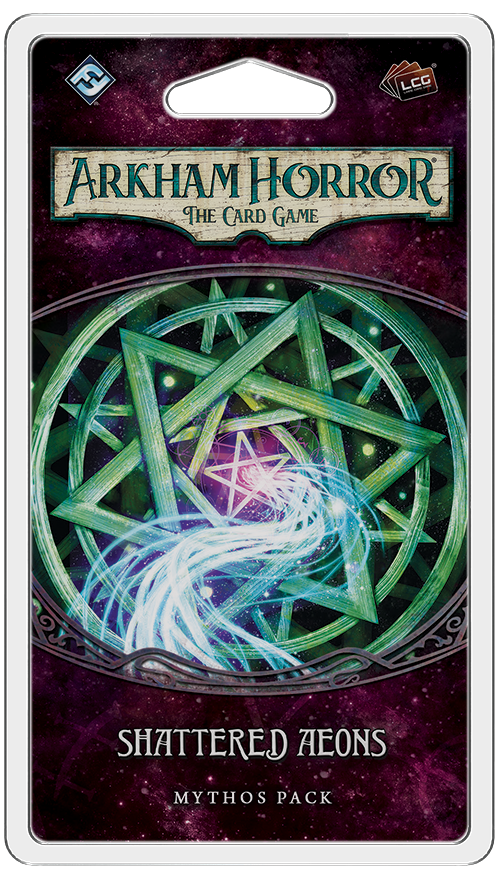 Shattered Aeons is the sixth and final Mythos Pack in The Forgotten Age cycle for Arkham Horror: The Card Game.

In The Forgotten Age, you journeyed to the darkest corners of Central America in search of a lost Aztec city-state. What you found during your expedition may be the greatest scientific discover of the age, but it could also be the Earth’s undoing.

Throughout The Forgotten Age cycle, you have tried to set your mistakes to right, chasing answers about the mysterious artifact your uncovered and those who pursue it. Retracing your path south, you have uncovered secrets that threaten your entire understanding of the world, of time, and of humanity’s place in the universe. Now, the last and greatest of your questions will be answered in Shattered Aeons. But be wary- mere mortals may not be meant to gain such knowledge and the truths you seek may destroy what little remains of your sanity.