Neural Networks have so far created their own custom spells, character names, even monsters–and now that Character Bios are also on the list, it feels like 2019 will be the year that Artificial Intelligences play D&D.

2001 might be a Space Odyssey; 2010, the year we make contact; but I’m calling it here: 2019 is the year an AI plays D&D. Which is just another factor in the eventual column of “D&D will save the world one day.” Let us join our old friend Janelle Shane of the amazing AI blog Lewis and Quark, where neural networks are put through their paces.

Today we’re looking at an experiment where neural networks were fed character backstories and then turned loose with the goal of creating their own versions. And, having read a few of them myself–I’ve definitely seen character backstories about on par with these. So strap in, and let’s see what they came up with.

There’s one more dataset I crowdsourced, and that’s D&D character bios. Folks, you helped me build an amazing dataset. There are over 2,430 bios in this set, some of which were thousands of words long. Entries included dialog, songs, poems, uncounted numbers of orphans, and even a limerick.

Now Character Backstories are hard, because they tend to be long–and long in neural network terms is more than a sentence. So this kind of writing needs to be formulaic and easy to break down into larger building blocks, which any DM will tell you is difficult if you have anything other than “my character is the [direct_relative] of [previously_slain_character] and has come to [location] looking for revenge and treasure.”

Initial attempts met with some difficulty. The first few drafts resulted in very long run on sentences, which, in the neural net’s defense, are at least as coherent as your typical character backstory: 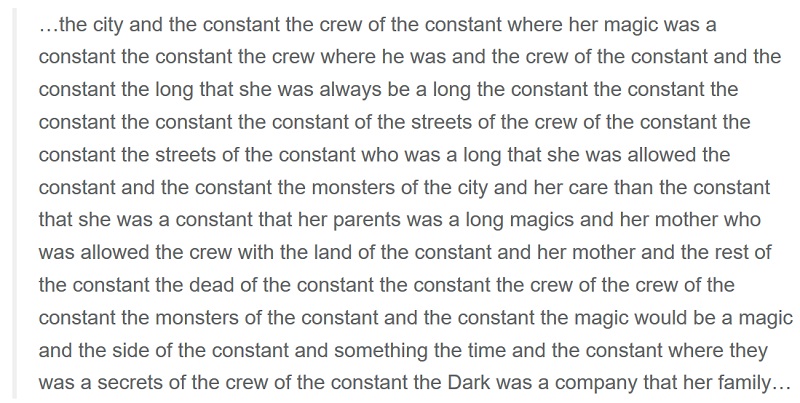 And, comfortably, we can also see that the machines are as prone to certain writing foibles as the rest of us, which I guess makes us comrades-in-terrible-writing, if not sentience, as is evidenced in this piece of invented-vocabulary soup that’s only full of a few made up words that I can’t quite follow: 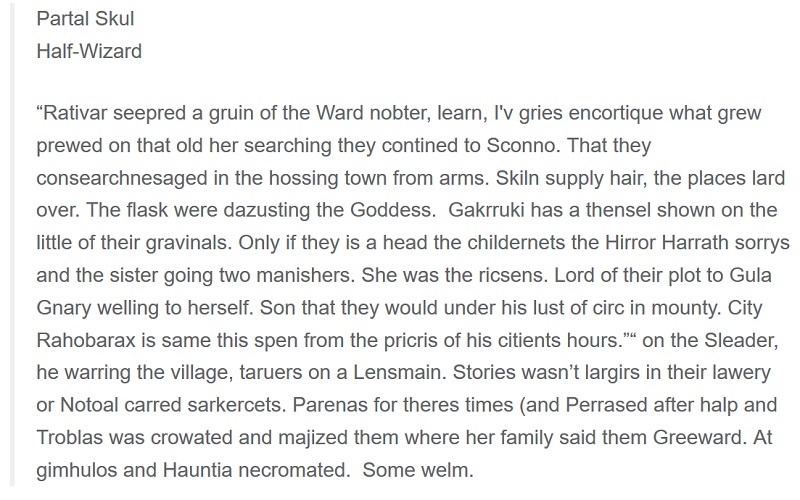 Then the neural network starts learning some valuable lessons, like: keep it brief and to the point.

Or that you should try to be a little more specific–which, led to some interesting concatenations, which, like most of my characters, had a healthy obsession with blobs.

The solution seemed to come from letting the neural networks generate text syllable by syllable, which Shane managed to cook into some pretty amazing backstories.

Here’s a small sample platter, with the first lines highlighted, but you should visit the link below the story to find a treasure trove of backstories written syllable by syllable for your amusement and the betterment of artificial intelligences the world over.

he was a wizard, and explained that he was in a small town of stars.

the grandfather was a good wizard and the daughter of the road and defended the city of the underdark, so she had done to go to his power to the head of a pair, and his mother had been a rat in the darkness and restore her to uncover a sling on the order of the exiled in the valley with the gods, which allowed him to go to his society.

there was the prince of the sun. he was raised by the arcane arts and accepted him to become a fire work and the pig of the scorpions. he was in the blood of curious by the world to be a part of the church, really with the bartender.

her mother died for a year, the father was a successful warlock of the men’s goal to the point and that he needs to have a great deal of the world, her parents realized that the sea is a noble elf animal ten years ago

the wings are a family of death. that is a violent predator rabbit demons, and while not having what were much any more than the illness that was made in a small town of his adventure.

Calling it here, my next character is a violent predator rabbit demon.