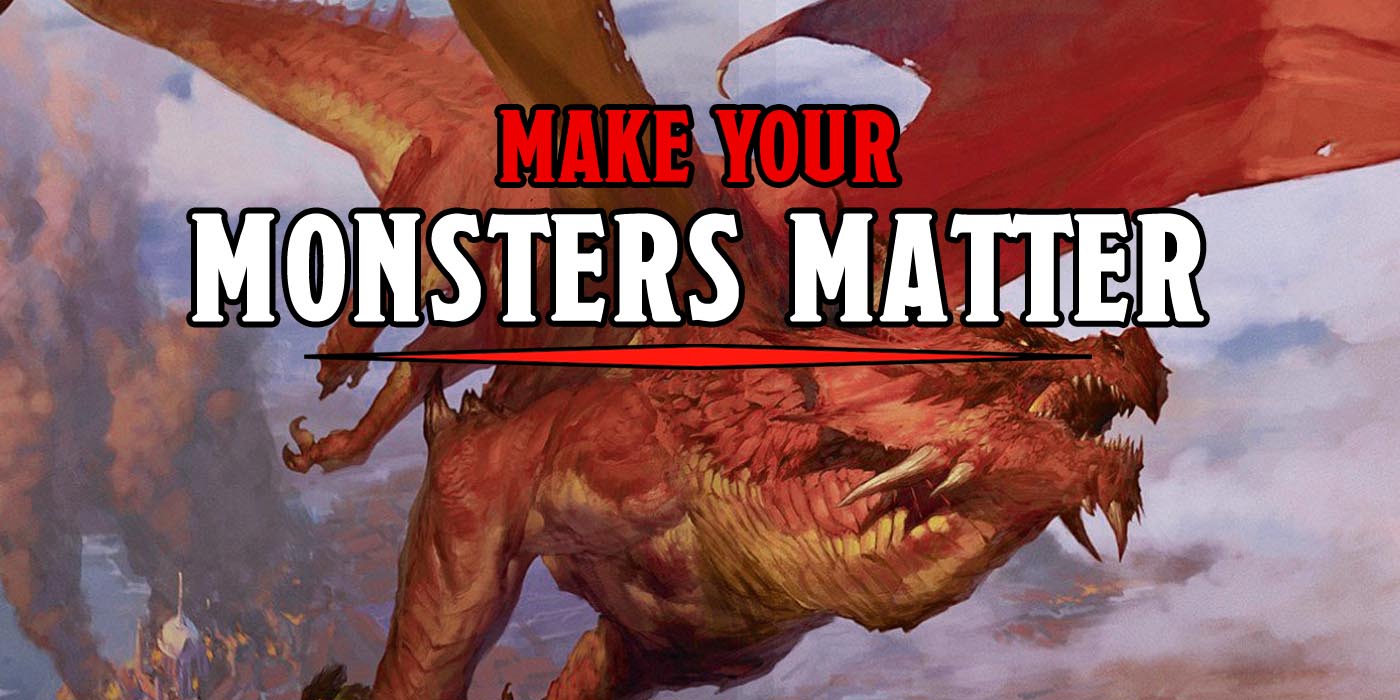 Take a lesson from Dark Souls about monster design: the devil–and the emotional narrative–is in the details. Today we’re going to look at how you can make your monsters matter more with some cool details.

Let’s talk about monsters for a moment. They’re a big part of any campaign, whether as the terrifying foes your adventurers fight or unlikely allies that turn up in the most unexpected ways. You might find them in the darkest dungeons or roaming the untracked and untamed wilderness. Monsters can do so much for any campaign. Whether fighting your players or aiding them, they can help you tell some fantastic stories before you even roll for initiative.

It all comes down to mood. The mood and tone of a game can be just as important as the plot you’re pushing along. And with just a little thought towards style and a bit of attention to detail, a monster can evoke mood and feeling in a way that draws players in. A few key features can invite exploration and set the tone for the story you’re telling. All that just from the actions and appearance of your monster. Let’s take a look at the emotional storytelling opportunities when designing an encounter.

This all comes from an interview with the deign team of Dark Souls of all things, which has been making the rounds on the internet of late. Here’s a snippet of conversation between the interviewer Kadoman Otsuka, and Dark Souls designer Hidetaka Miyazaki and artist Masanori Waragai that talks about elegance and tone. 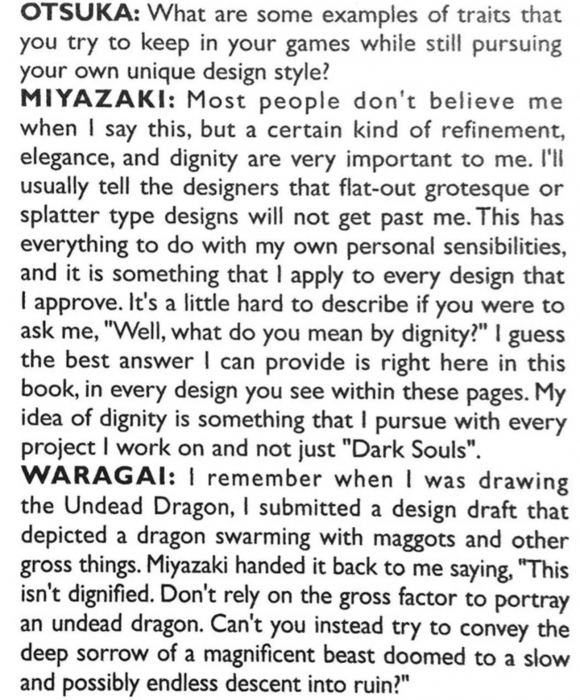 That last sentence, in particular, is of interest here. The “deep sorrow of a magnificent beast doomed to a slow and possibly endless descent into ruin.” For reference, here’s what the Undead Dragon ended up looking like, if you’ve never played the game:

When you come across it, it’s clinging to the side of a cliff–looking dead and spent. Trapped between its claws are two special items, but when you disturb the dragon… 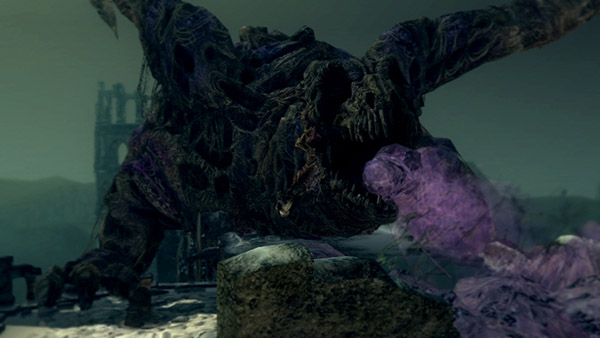 It spews a toxic attack that will kill you if it builds up too much. But in Dark Souls that’s also representative of the corruption inside of it. It’s breathing this wretched, horrific attack that is a mockery of the proud creature it once was. It debases itself to protect the last special items that it claims as its own, items it “died” protecting. They’re the last things that give it a semblance of self or sanity. All this works to provide it with an air of sorrow, ruin, and fallen majesty. It sets the tone of the encounter so well.

You can use this same principle when designing your own encounters. First, think about what kind of feeling you want your monsters to evoke. How can you give them emotional weight? What kinds of details invite players to think about something? What details evoke sympathy and understanding? These are your keys to tragedy. The dragon’s plight might make you feel bad–but that’s only because you can understand the context. And the way you describe the monster, your words, your tone, all of this works to establish this.

It’s a stark difference from, say, describing an evil dude in armor that you want your players to fight without any second thought. 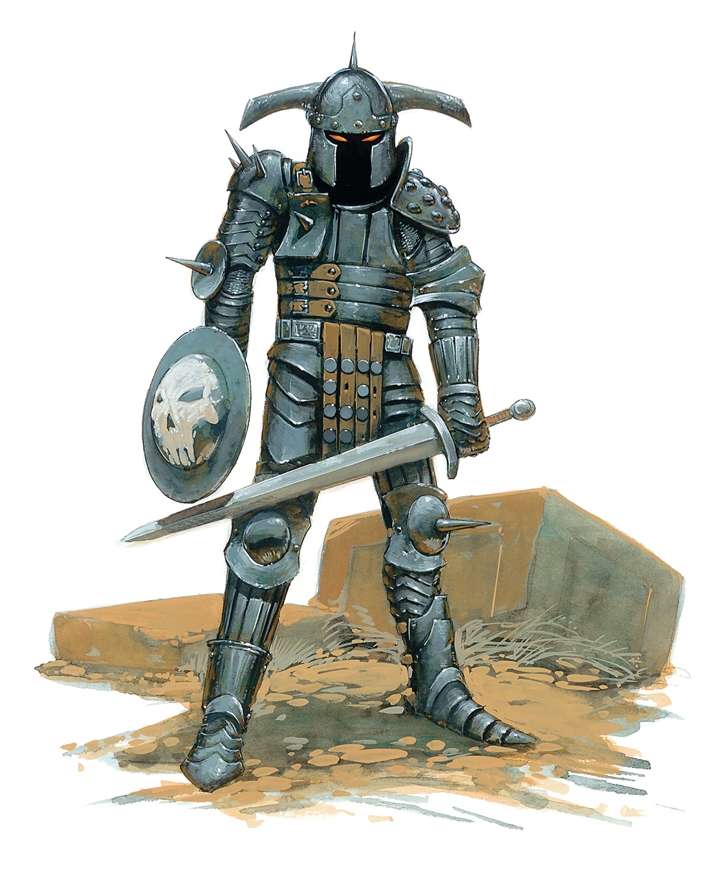 But even there, details are your friends. It’s the difference between Lurtz from the Lord of the Rings and Azog. Both are villains who have a similar position… but Lurtz is memorable. 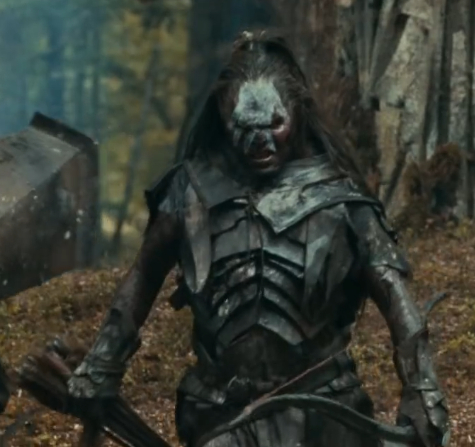 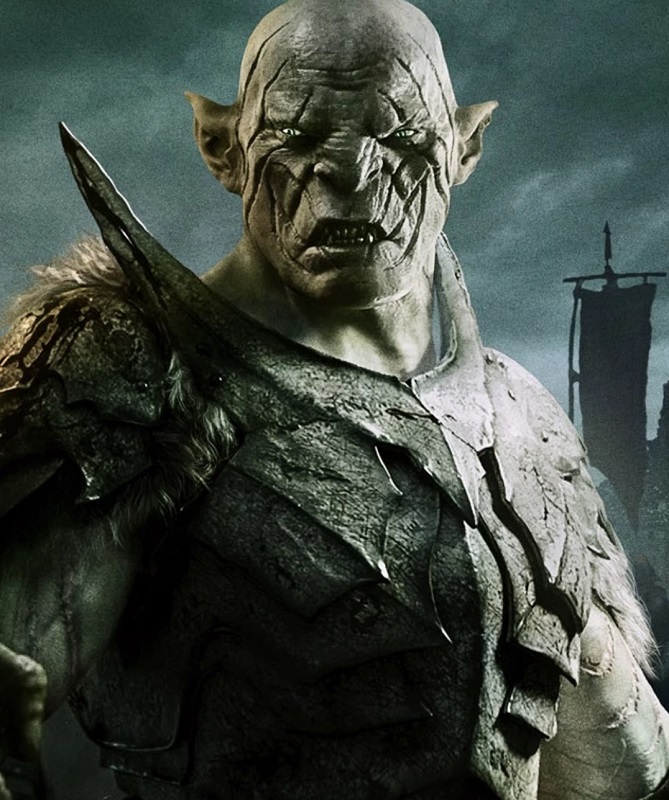 There’s just something almost lazy about him. And I think a big part of this is specificity. Now in Lord of the Rings, all the orcs wore armor that was real and individually crafted. Azog has the benefit of digital mapping, which on the one hand makes it easier, but on the other hand, robs you of the specifics of something entirely real. And the eye picks up on this.

The same principle applies when describing monsters. If something’s wearing scale mail armor, what kind of scale mail is it wearing? What story does the armor tell? What kinds of actions has it taken? What kinds of fights has it been in? The answers to questions like these–specific moments that show this creature/armor/sword/whatever has been around for more than just the moments the players rolled up on it are one of the things that make the game magic. 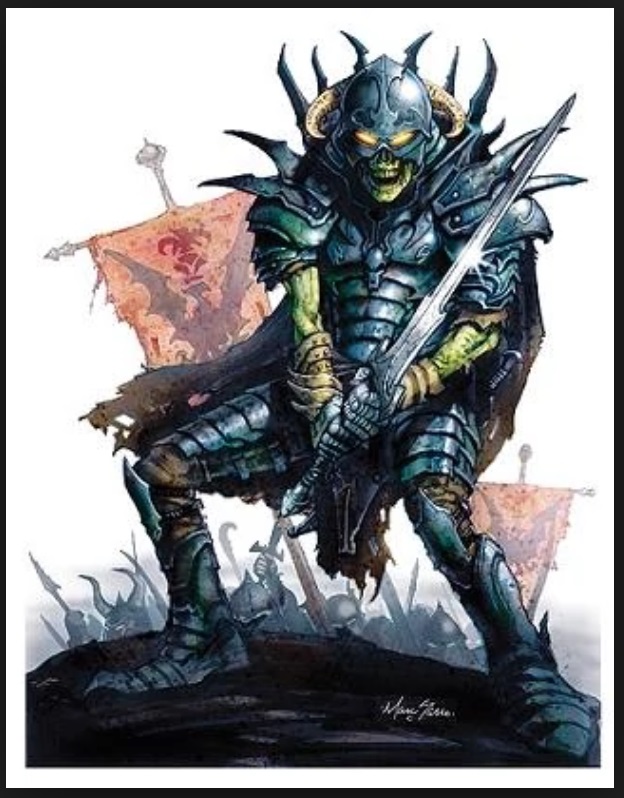 Don’t just have them fight a death knight–have them fight a death knight whose armor bears the marks of the order she once fell from. Have it be a twisted reminder of the ideals she once held pure. Maybe show some signs of the internal struggle of the character. Using the Death Knight example–maybe the decorations on her armor have been hammered out, taking the shape of new symbols, unholy ones that mark her evil masters–but maybe there’s still some semblance of the person she once was in there. The noble paladin fighting against the evil.

Or maybe there’s nothing there of her former life–but that too is a choice. And you can find details that convey that story too. In Dark Souls, characters like Havel the Rock… 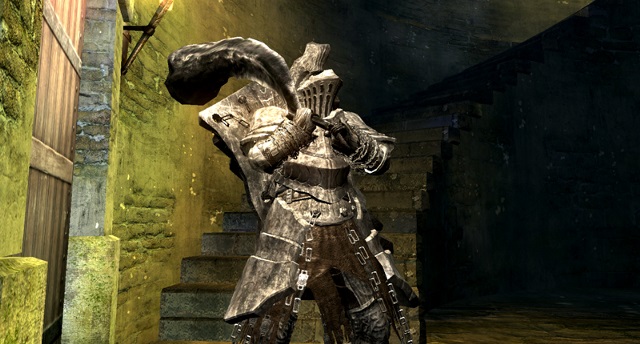 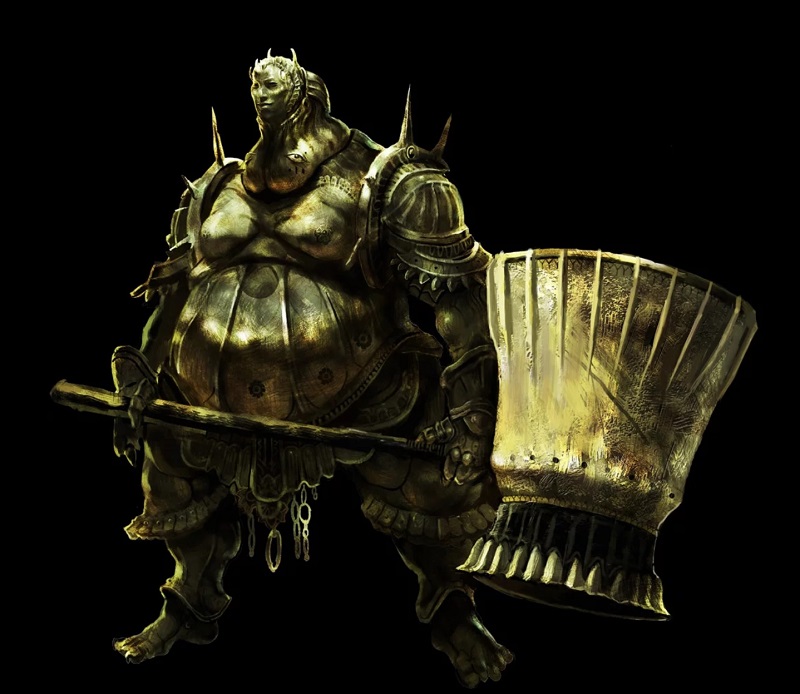 …convey a very different sort of character. You can see that something’s not right with Smough. Even his armor seems corrupt–somehow monstrous.

And that’s just one aspect of one kind of detail you can work with. If you’re designing an encounter with something like a Bulette, everyone’s favorite Landshark, then think about how it fits in your world. What makes this specific Landshark unique? Has it been attacked before? Is it a menace that’s preyed on merchants and has the weapons of bodyguards embedded in its hide, Moby Dick style? Or is there something odd about its scales–maybe it has been diseased or afflicted with something. Maybe it devoured a magic item that’s been slowly changing it.

Whatever you decide, specificity is your friend. Obviously, you can’t go around coming up with specific details for everything ahead of time (unless you can and do, in which case, I salute you and your free time)–but even if you’re an on-the-fly style DM, all it takes is one unusual detail. Just say whatever comes to your head first–something very specific, and then figure out what it means later.

Or better yet, don’t ever tell the players, but come up with a stand out detail and let them guess what it means–if you’re lucky they’ll do all the work for you. But try to jump and then justify. Don’t worry even if you don’t have the answer, let the details out and then follow them to see what you come up with. Cultivate your sense of style. After all, if you think something is cool and spend some time on it, your players will (hopefully) pick up on that, or at least be interested. Interesting people are interested–the same thing applies here. Let your excitement lead you and see where you end up. Some of the best moments in RPGs come from those moments of shared discovery, and this is a great way into that.

Do you have any tricks for conveying story or emotion in your monsters? Let us know in the comments! 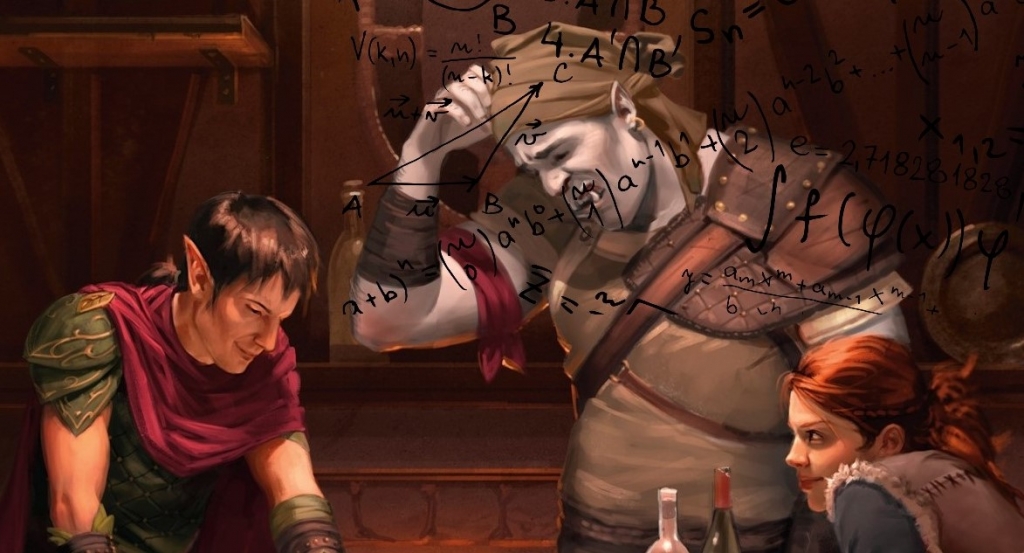