The head judge from LVO is here to talk about the need for a Code of Conduct and List Standardization for ALL ITC events.

A Guest Editorial from SaltyJohn

Hello, competitive 40k players, potential 40k players, trolls, lurkers, and random readers who stumbled upon this. SaltyJohn, here head judge for the LVO talking about the need for universal adoption of the Code of Conduct in the ITC.

Last summer the LVO/ITC Head Judges group decided it was past time for a Code of Conduct in 40k, and we began work on one in earnest. Over the course of the summer, and at events like the Bay Area Open, we refined what we thought should be in it. We then took the document to the ITC Tournament Organizers group for feedback. We discussed, debated, and made an addendum to the Code of Conduct. The Bay Area Open 2018, So Cal Open 2018, and a few GTs/RTTs around the country were testing grounds for the foundational tenets of the Code of Conduct.

The ITC/LVO Head Judges and the TO Group then revisited the Code of Conduct and we arrived at the document we released for use at the Las Vegas Open 2019 and for any Tournament Organizer who wished to also adopt it. Around the same time the Code of Conduct was getting polished the ITC and Best Coast Pairings, after months of work, also released their standardized list format. With the Code of Conduct, standardized list format, and list submission deadlines in place and enforced the Las Vegas Open Warhammer 40k Championships came and went with only a few minor incidents and no major kerfuffles to speak of.  That’s quite an accomplishment.

The largest Warhammer 40k tournament ever, in the history of 40k, came to a conclusion without major incident much to the chagrin of the tabloid 40k journalists, troll groups, and various naysayers hoping for an “I told you so” moment that never came to pass.

Times Are a Changin

Competitive Warhammer 40k is changing. It has been barreling down the road toward massive popularity, internet exposure, and a legitimate audience for several years now. When Frontline Gaming began live streaming the top tables of the Las Vegas Open on Twitch in 2016 I knew the world of Competitive 40k had changed. The audience was impressive, but more so, the reaction of the audience to what was happening on the table top. The games were watched, re-watched, poured over for mistakes. The game had changed. Gone were the days of he said/she said accusations of cheating, “Oops I forgot” moments and “clerical” errors in lists. The player base had tasted the future of competitive 40k.

At the same time, the 40k Forums were faltering into the abyss of irrelevance the 40k Tournament scene; players, TOs, and judges were being catapulted into a new era of relevance and notoriety. That brought major growing pains though. As the tournaments grew exponentially and the audience on the internet grew to match it, so too did the expectations of the attendees and the fans that the players and events would comport themselves to a set of norms. These norms were based primarily around standardized missions and terrain at first.

Thanks to some infamous situations the focus soon shifted from the event to the players, then back to the TOs and Judges to get the community and player base back on track. Attendees of events do not want their time playing in the event spoiled by cheating, poor sportsmanship, overly intoxicated players, rude behavior, or the unexpected. They want to come to an event, in some cases an event they spent a lot of money on attending, and have fun competing for a set of prizes.

With 8th edition and the dawn of a new, improved, involved Games Workshop the train of Competitive 40k again built up steam and took a few turns at recklessly high speed. Player behavior seemed to be getting worse. TOs and judges seemed to lack the tools, or worse the gumption, to combat it.

In reality, the game had changed. With far fewer abusable areas in the game and a massive player base that was interconnected on Facebook, Twitch, Instagram, and YouTube using their real names in many cases and not the ubiquitous anonymous Forum handle; the real change came from the attitude of the players. They simply weren’t going to stand idly by anymore as players behaved poorly, cheated, modeled for advantage, posted fuzzy lists into BCP on purpose, refused to post lists, were poor sports, etc. This is what the Code of Conduct, submission deadlines, and standardized list formats came around to combat on behalf of the players calling for change. That call continues.

In Conformity Is Success

I cannot stress enough the role that enforced list submission deadlines, standardized list format and published Code of Conduct played in the dramaless success of the Las Vegas Open 2019.

It wasn’t easy, there was resistance from some players, growing pains, and many hours of work. It took the people at Frontline Gaming, Best Coast Pairings, and the ITC/LVO Head Judges combined efforts but the pay off was well worth it. The results of that work shouldn’t be the exception in competitive 40k, it should be the rule. Rather than the LVO being an enigma in Competitive 40k, it should be one of literally hundreds of events run each year in the ITC that can boast a smooth running, and relatively drama free event. Drama free from the perspective of negative play experiences, cheating, collusion, etc.

What the Las Vegas Open is though, is the road map. It’s the template the events in the ITC can use to have similar success. It all begins with setting down hard guidelines and sticking to them. It’s high time ITC events became united in our efforts to standardize the play expectations at our events. There are a few simple steps to this end. 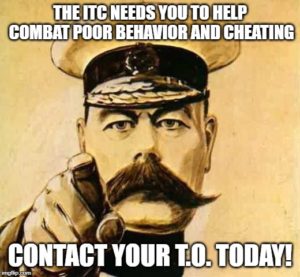 If the Warhammer 40k community can adopt these 5 simple guidelines over the course of this ITC season we will see a marked increase in the fidelity of event results and a marked decrease in the vitriol and riling up of the community when things do go bad. With a system in place to handle these things in a universal manner, the expectations will be set for all the stakeholders. Players, Tournament Organizers, Judges, sponsors, streamers, and the audience will have a single point of reference for the expectation of how the event will go and the repercussions for shortcomings that may occur.

Nobody is perfect. Playing a perfect game of 40k isn’t possible, I know, I judge the LVO. Even judging an event perfectly isn’t possible. It’s what happens when the imperfections occur that matters. How it’s handled at the moment, after the fact, on the internet, and beyond that matters. Having a set of clear guidelines and expectations across the ITC is the key. We have the tools, it is time for them to be adopted by the Tournament Organizers in the ITC, the community deserves it.