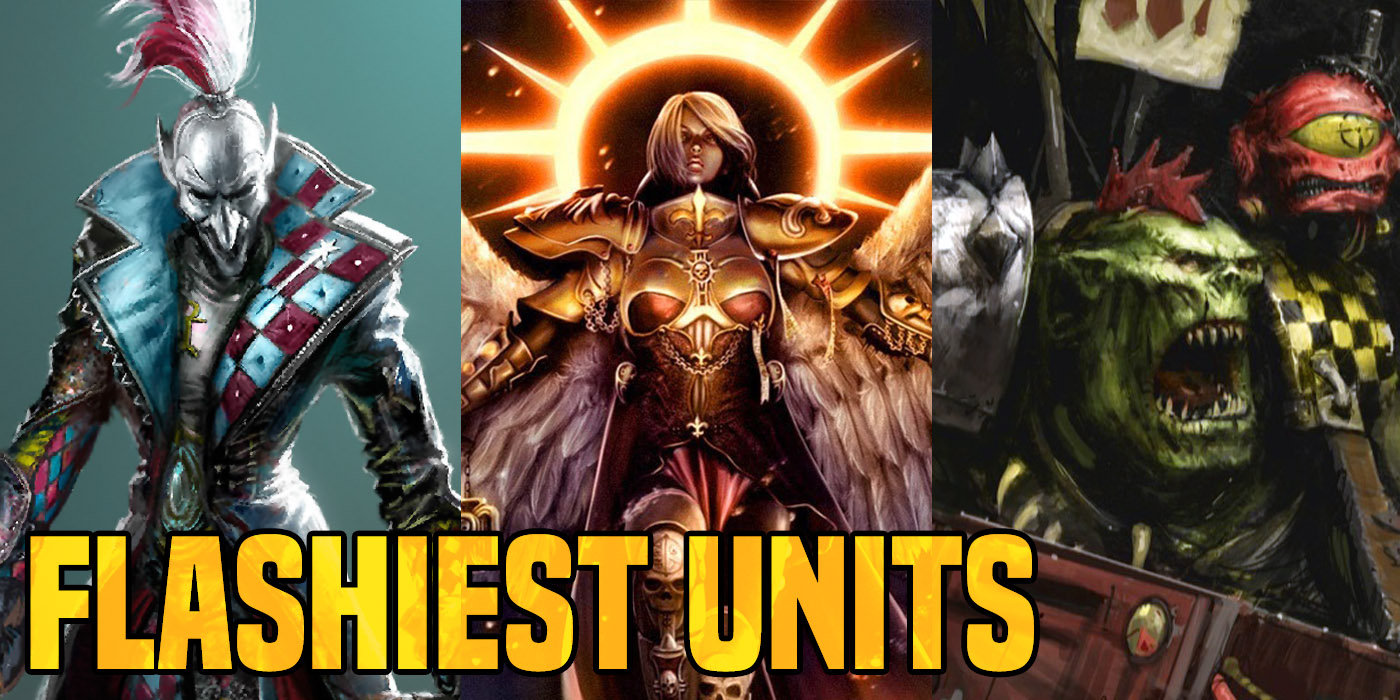 Some units in Warhammer 40,000 are there to put the “Theater” in “Theater of War” – This is a list for those units!

We all love a nice solid looking miniature. The kind of no nonsense – keep your head down and get the job done kit that embodies the grim and the dark.  Today isn’t the day to talk about those kits. Today we try in vain to avert our gaze from the attention seekers. The models so dripping with detail and complexity you just can’t NOT look at them. These are the over the top dandies of 40K, and once you’ve painted them up – you know why. 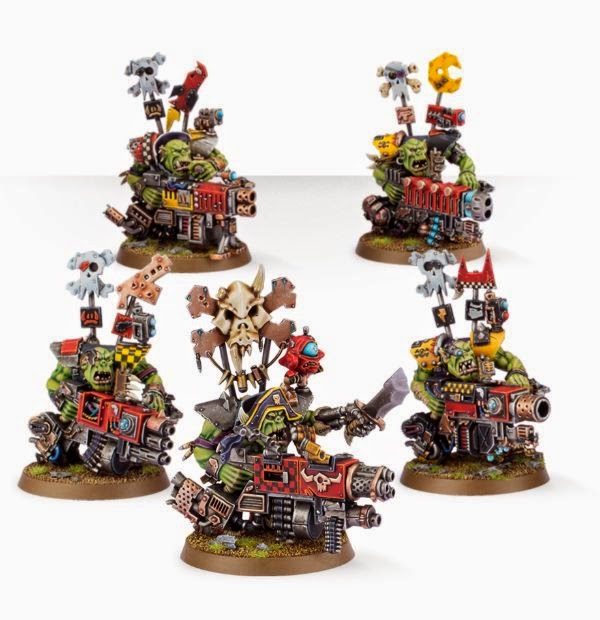 The perfect embodiment of the old Orky saying “MOR IZ MOR”. These guys are where you learn to master checks, dags, and high-contrast glyphs. The models have over the top detail sticking out from almost every direction. Being pirates, these guys demand garish paint schemes, incorporating multiple Clan colors. They are a fantastic, fun unit that will leave you wanting to stick a giant metal pirate hat atop your Stompa and hoist the Jolly Roger for Mork (or Gork).

The Eldar clown/mime/ballet/warriors. These are interesting models, as the minis themselves are sophisticated and lithe little things. Not too much the top detail on the minis themselves – but it’s the expectation of insane paintjobs that will have you buying a jeweler’s loop and 10/0 brushes by the dozen.  From diamond patterns, to stripes, to left right and quartered scheme – each Harlequin you paint is like painting an entire squad of “normal models”. The Harlequin vehicles only make things harder with larger canvases to throw that detail onto. The progress will be slow; but the results more than worth it. After all, art is pain.

I hope you like gold, lots of gold. The Saint is in the opposite side of the detail spectrum than the Harlequins. Here we have lots of solid color areas, across the 3 mini set, but with these being holy heavenly figures, you are expected to really take your time. No slap dash washes and drybrushing on these ladies. Instead, take your time to create the most burnished shining armor you can, piece by piece. Then you need to master your minimalist white techniques for the cloth work and wings. There are plenty of flowing scrolls and each should be a thing of subline beauty and detail. These aren’t mass produced Purity Seals – so take your time and get that lettering and rubric work right. Finally the flowers and the doves. This will be your ONLY chance to do doves in the Grimdark – so enjoy it.

From the light into the putrid dark. Mortarion is the polar opposite of his brother Magnus’ mini. The Lord of the Death Guard is an ambitious kit dripping with detail on every possible surface. While you could just throw some new Citadel Contrast on this guy and hope for the best, Mortarion’s mini has so many sub-sections that you really need to dive in and give each one the attention it deserves. From the metal censers and weapons, to the floaty magical ichor holding him up. From the giant moth wings, to the rotten tattered cloak. From his powered armor, to his myriad Nurgling attendants. Painting Mortarion in reality is like painting up about a dozen different minis, that just happen to be touching.  Again, it’s going to be a chore and you will be temped to just rush through the detail, letting drybrushing do the real work – but remember, Grandfather Nurgle is watching… 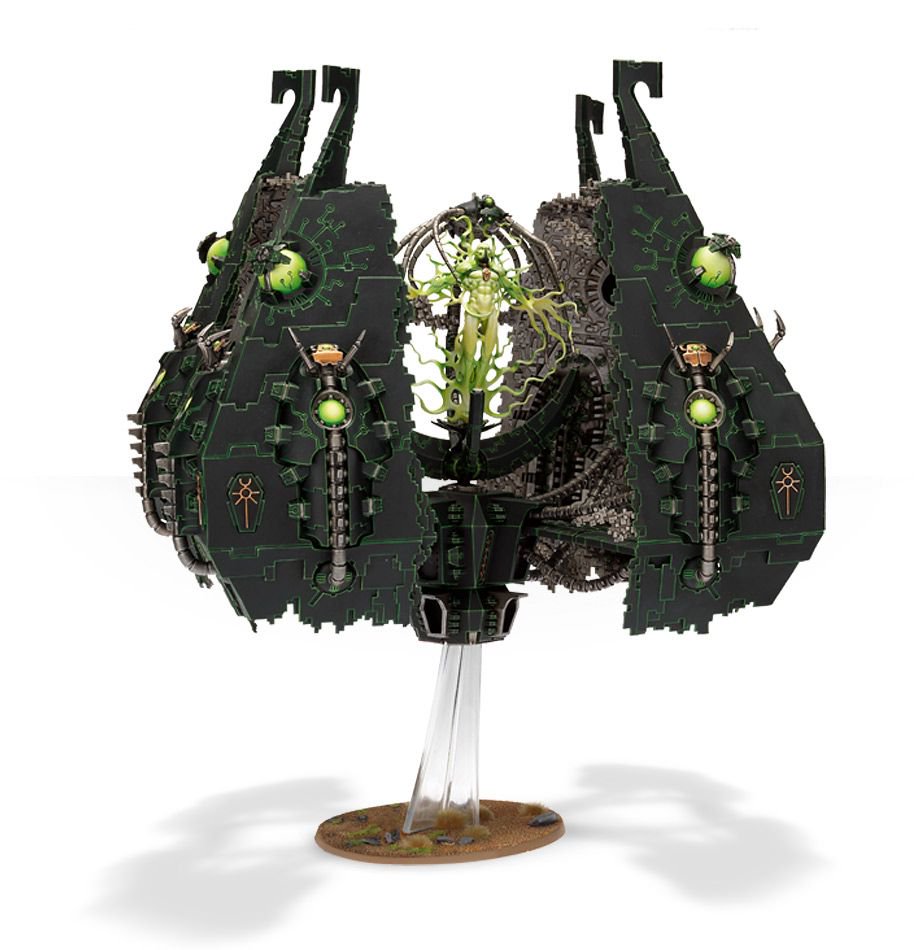 ALL the detail! The Vault is truly one of the nuttiest “minis” (it’s huge) GW has ever produced. It’s giant, covered with 8 Necron bug-things on the outside, loads of surface detail, on a flying stand… oh, you noticed you have to PAINT THE INSIDE ALSO! There’s no “glueing the doors shut” on the Vault – you have to do the whole thing. On the inside you get the pissed off C’tan shard, held in place by that funky spider warden, the support struts that hold the entire thing together, and … dear Lord, all the Living Metal insanity of the interior walls. Here’s an overhead shot to get you ready for what’s in store for your paintbrush: 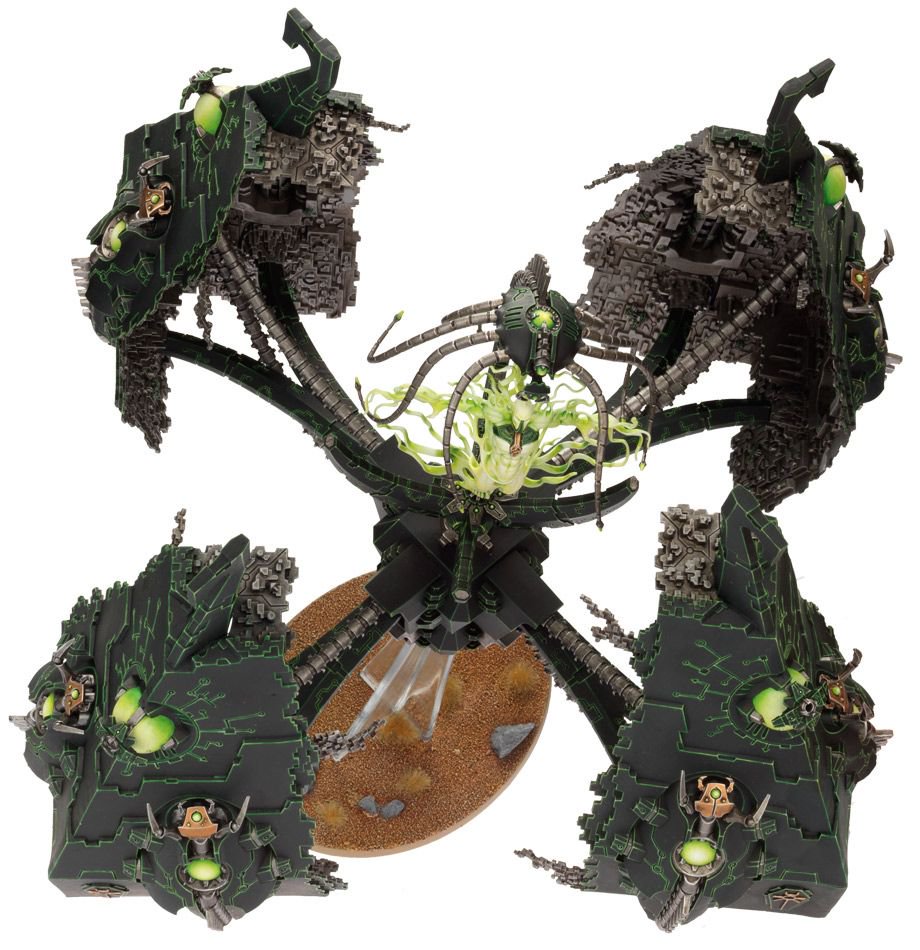 Yup it’s crazy and good luck getting this thing on and off an airplane in one piece.  I hope you have a VERY good transport case – you’ll need it.

~And that’s our list. Did we miss any? What minis do you think have the most detail or painting challenge out there?