Deepwars: Battle for Diablo Reef – Miniatures Combat Under the Depths

One of the things that I love about miniature gaming is the number of options out there. You are not limited to just GW, PP, or any of the popular publishers. There are so many other options out there. Today, we take a look at a new two-player starter set that is about to hit the market called DeepWars: Battle for Diablo Reef by Antimatter Games.

As a note, the images in this post are from Antimatter Games and used with their permission. 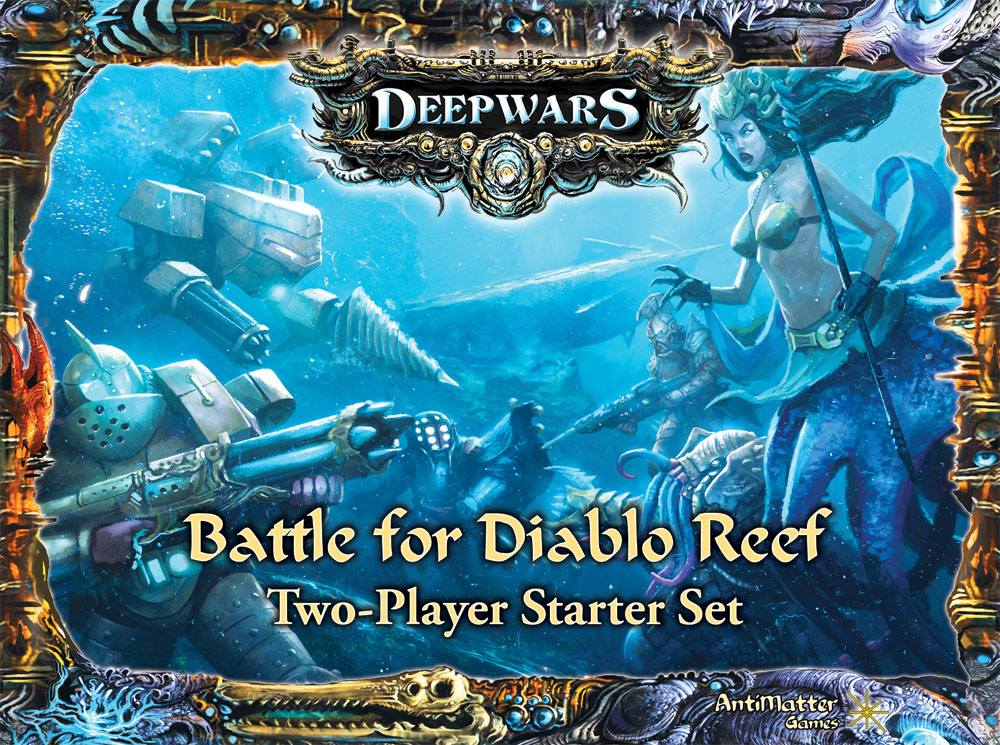 The cover of the upcoming two player starter set for DeepWars: Battle for Diablo Reef.

For those that don’t know of DeepWars, it takes place in an alternative history late 17th-century world where scientist discovered a lost land in an underground sea. You choose a faction and send your members down there in search of ancient technology. There are four distinct factions in this game, and two of my favorite looking groups come in this starter set. Those factions are the Fortune Hunters (the Human faction) and the Dark Mariners (a group of telepathic and tentacled beings).

The starter set should arrive on Kickstarter backers in late May and hit the market in June or July for the rest of us. It will sell for $69.99 American. This box looks really cool to me and I am hoping to get a look at one of these boxes in the future.

Rather than listing what is in the box, let’s take a look at the back of the package. Below is the back artwork for the starter box. 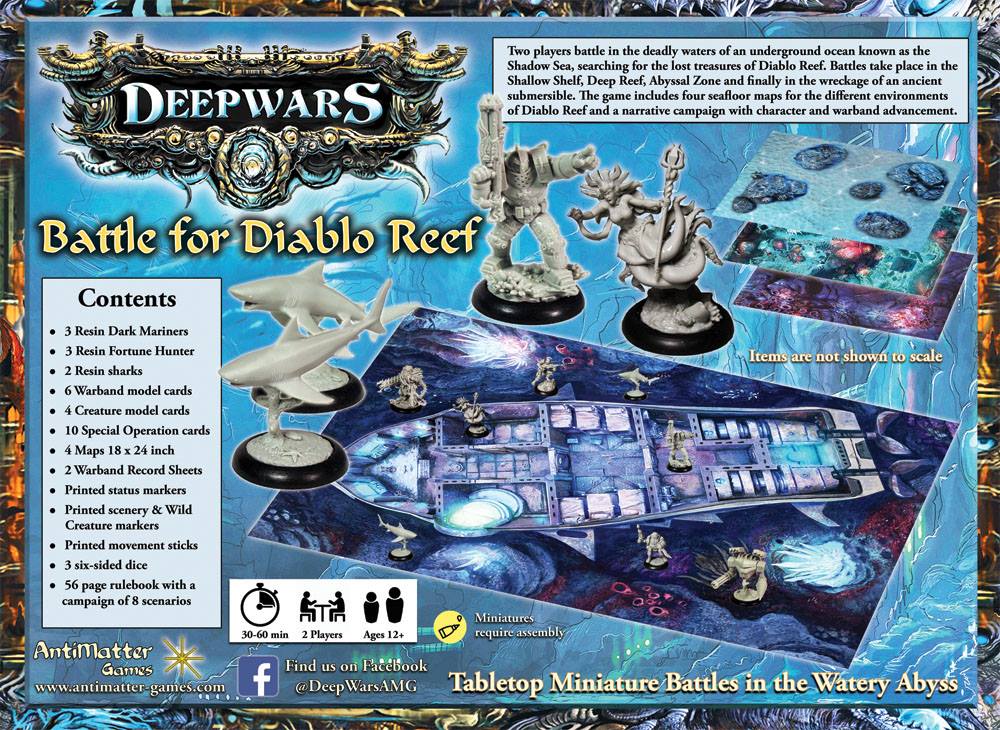 Doesn’t this look cool! Above is the back of the box for Battle for Diablo Reef.

The game comes with two factions each with three miniatures and two wild shark miniatures too. I don’t know how the Sharks get involved, but I am liking the look at what is in this box. Searching Antimatter Games’ Facebook Page, I found even more preview pictures of what is in the box. Below are those images. 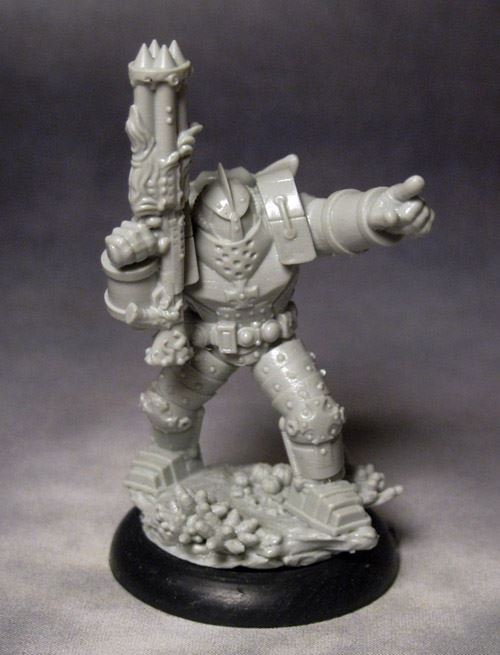 The Fortune Hunter Leader. I love the look of this model. 17th century underwater power-armor. I’m in!!! lol 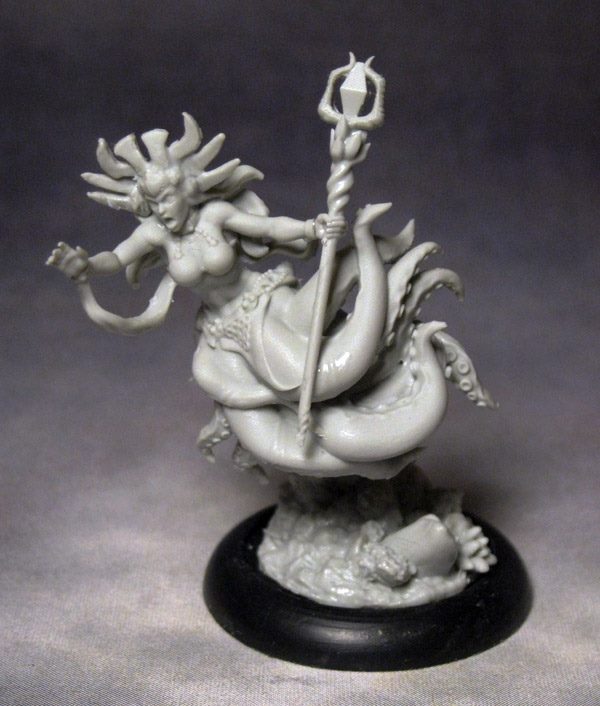 The Dark Mariner Warband. I really like that heavy model in the middle of the image. Nice! 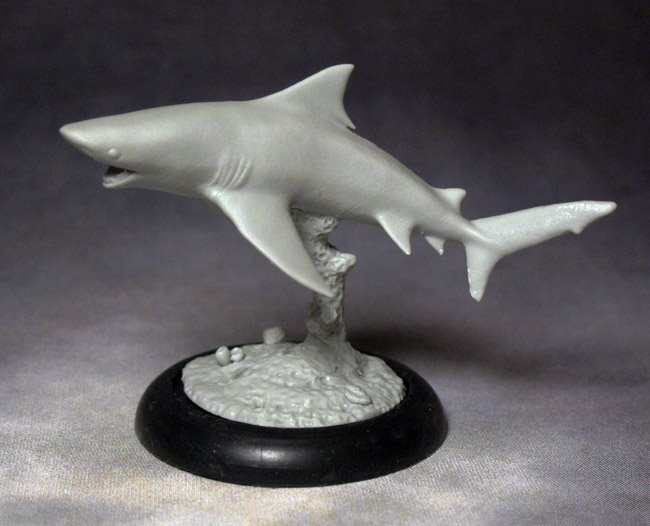 One of the two shark miniatures. I think it is cool that they added wild creatures into the game and I want to see how they interact with the action of the game. 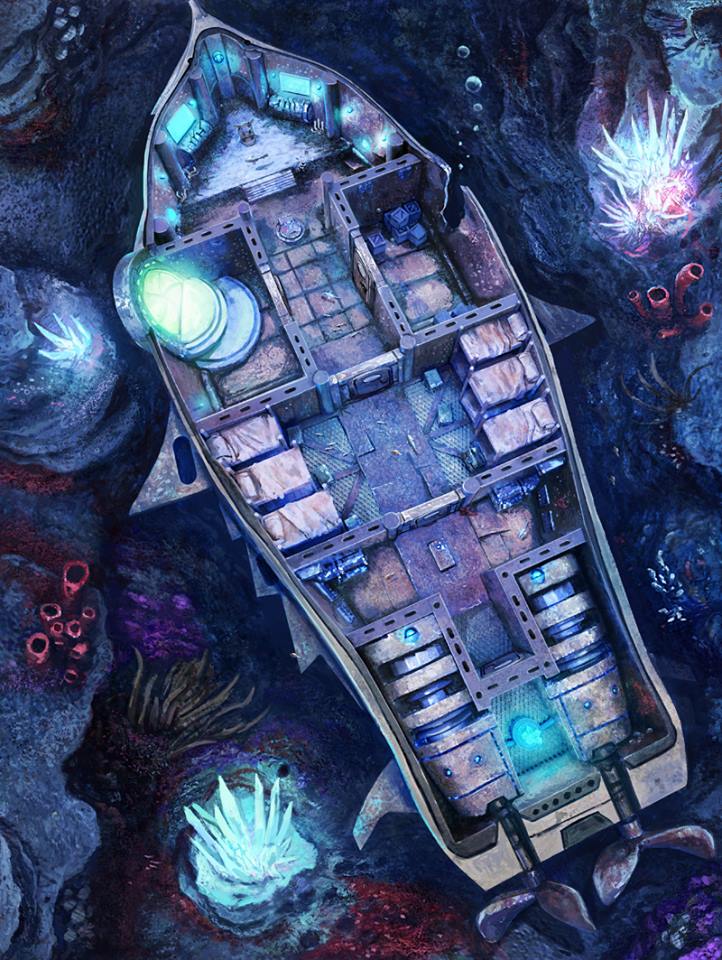 My favorite battle mat. 18″ by 24″. Looks very cool to search through for artifacts. 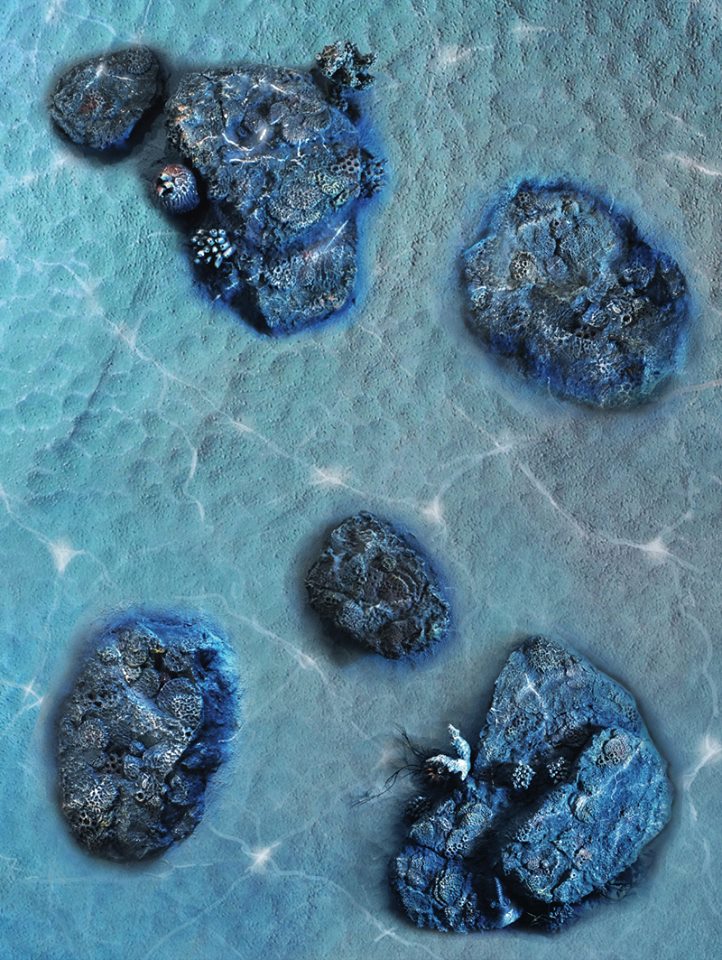 One of the other underwater gaming mats. Looks very nice.

There are even more preview images up if you go searching, but I am going to leave it here for now.

Overall, it looks like a really cool boxed set and I like what I see in the preview images so far.

Expanding on the Game

The starter sets are designed as a fully playable game. If you buy just a few more miniatures, you should have a viable force for a standard level miniatures game. Looking through the Antimatter Games website, I found a few interesting images to share of the other factions and available terrain. 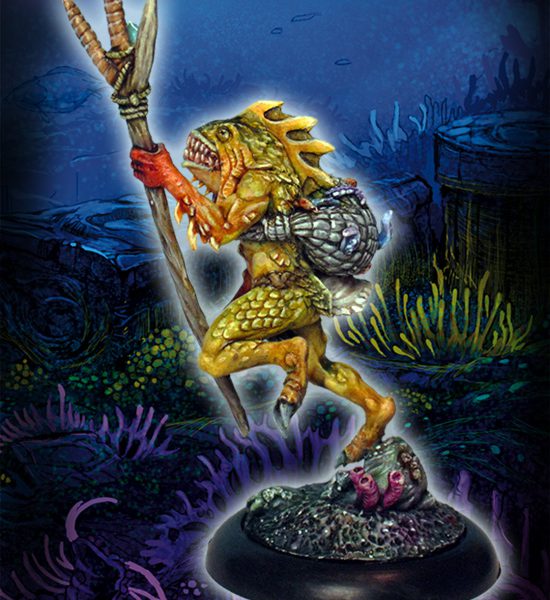 One of the four factions is a group of fishmen along with deadly fish. To me, they look kind of like Deep Ones. They also remind me a bit of X-COM Terror from the Deep (one of my favorite games from years gone by). 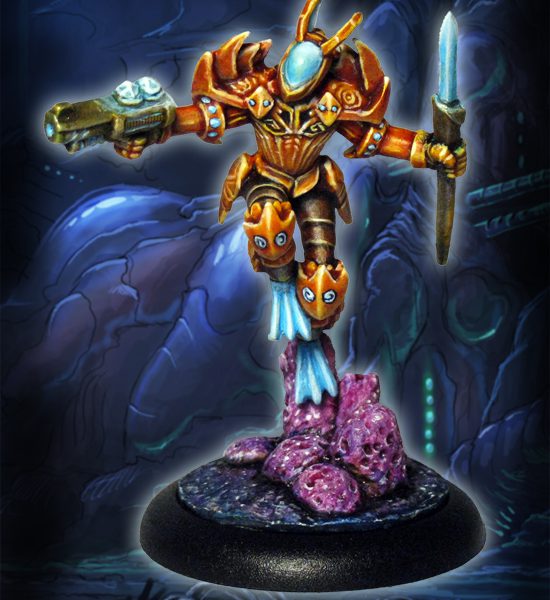 One of the other races is a group of scientifically advanced beings. Cool. 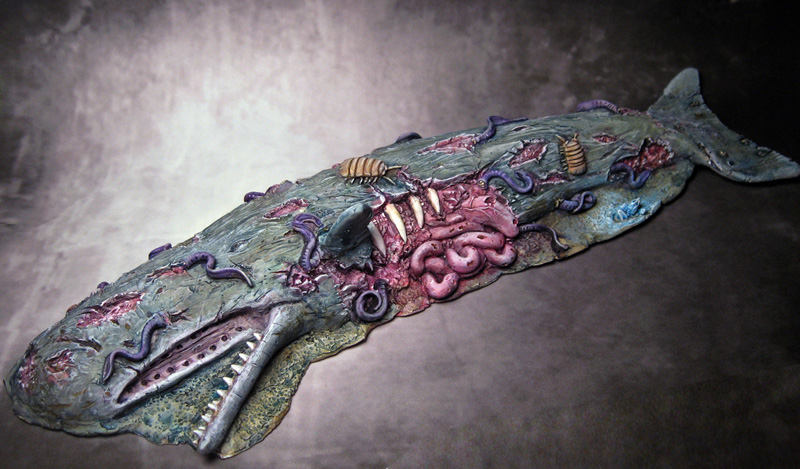 Believe it or not, you can buy a dead whale carcass as terrain. Reminds me of the terror mission in the new version of X-COM: Enemy Within. 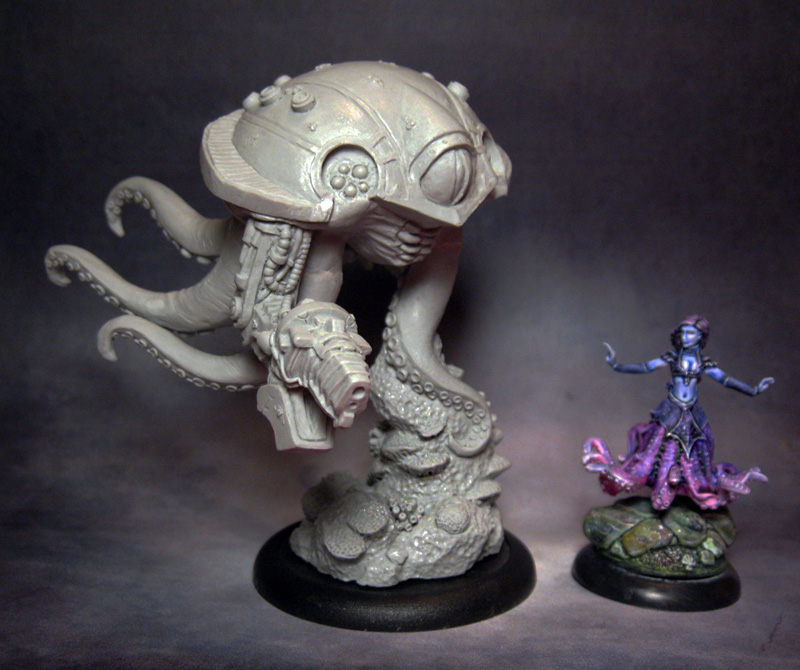 This is one of the extra miniatures that you can buy for the Dark Mariners faction. So cool. Looks like an organic flying saucer for under the sea.

Hopefully, you enjoyed this quick preview of the DeepWars: Battle for Diablo Reef Starter Set. To me, this looks extremely cool and it reminds me of one of my favorite video games from when I was younger (X-Com: Terror from the Deep). I will be watching this release with a great amount of interest.

How about you, does this game interest you?

Please note that this story is a copy of a preview article for DeepWars: Battle for Diablo Reef over on Must Contain Minis.