Monsterpocalypse: Empire of the Apes Hype

We’re pumped for the next Monsterpocalypse faction, Empire of the Apes! We’ve gathered up all the information we could find on this Protectors faction. Let’s take a look at the awesome models, along with the tidbits of information we know. We’ll go in backward order and save the Monsters for last. These models will arrive in the online store and on LGS shelves this June. From Privateer Press… 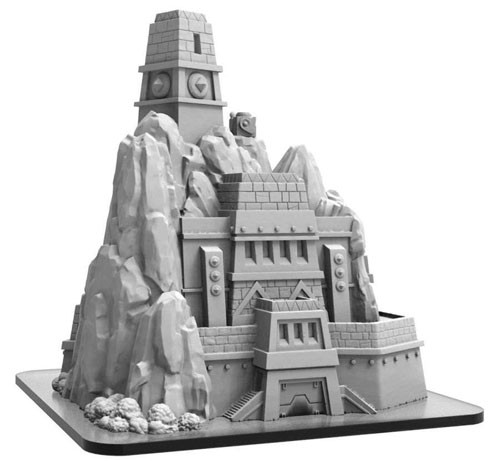 Those who have seen the Empire of the Apes in action have begun to suspect there must be human collaborators facilitating their military efforts, and the Jungle Fortress certainly supports this theory. What strange cabal might be behind efforts to enhance the native intelligence of the apes and help outfit them with modern weaponry remains unknown? Their facilities have sometimes been discovered in remote locations. Within these halls, stolen or black market-bought military hardware is modified to suit the oversized frames of the apes. They also stock many pairs of oversized ape goggles, as eye protection is clearly a priority.

The Jungle Fortress brings unit reinforcements to the battlefield and helps deploy the Empire of the Apes forces. A Protectors player who secures this building can spawn Empire of the Apes units to the battlefield cheaper. Any player who secures this building gains the ability to bring even more units from their reserves into play, allowing them to overwhelm any opponent. 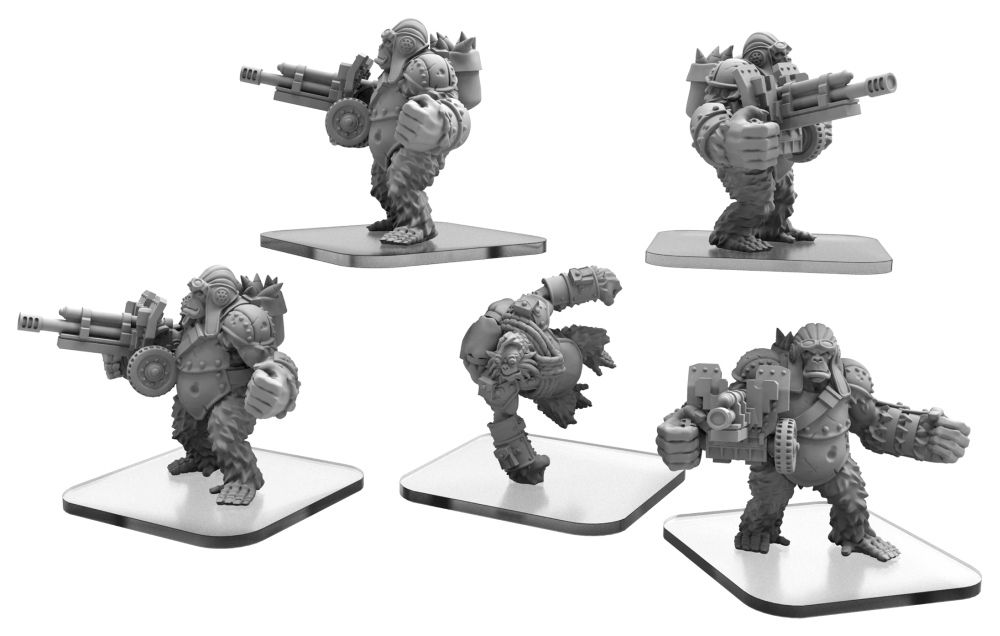 The great apes joining Kondo in his wars are extremely clever and adaptable, having stolen a variety of modern military hardware and showing surprising facility at employing them in battle. The ape gunners carry looted artillery pieces and employ them as a human might a carbine – and with surprising accuracy. But the true proof that the apes are smart enough to eclipse humanity is evident in the ape infiltrators, who employ advanced electronic hardware to identify hidden enemies and assist their targeting and destruction.

This blister pack contains Empire of the Apes units to expand your Protectors force. Ape Gunners carry looted human artillery pieces that they are fully capable of firing at distant targets, but they are not afraid to close with an enemy for more traditional attacks. The Ape Infiltrator specializes in spying on opponents, shutting down enemy Cloaking nearby, along with pointing out the weaknesses of those enemies for friendly ranged attacks. 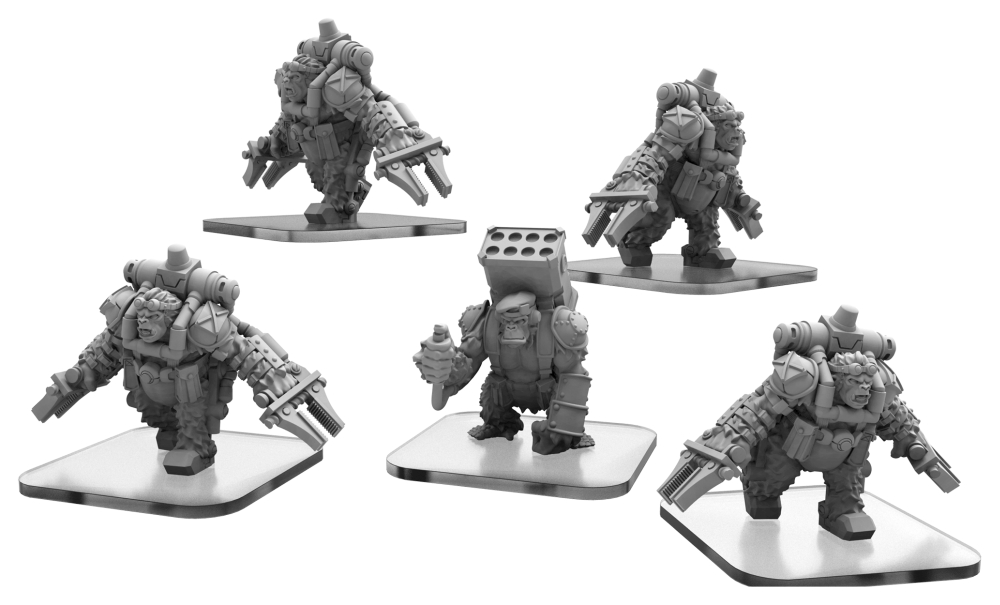 The great apes joining Kondo in his wars are extremely clever and adaptable, having stolen a variety of modern military hardware and showing surprising facility at employing them in battle. The assault ape wears a prototypal exoskeleton intended for lifting heavy cargo but which is just as useful for smashing chompers and destructomites. Rocket apes carry an explosive projectile launching array equipped with an easy-to-use firing trigger, allowing the unleashing of an ongoing salvo.

This blister pack contains Empire of the Apes units to expand your Protectors force. Assault Apes go toe-to-toe with enemies, using their powered exoskeletons to augment their considerable strength. This translates in the game as these units being the first to be able to take advantage of Power dice. The Rocket Ape prefers to keep its distance and spread attacks across multiple opponents thanks to the Multi-Fire ability. 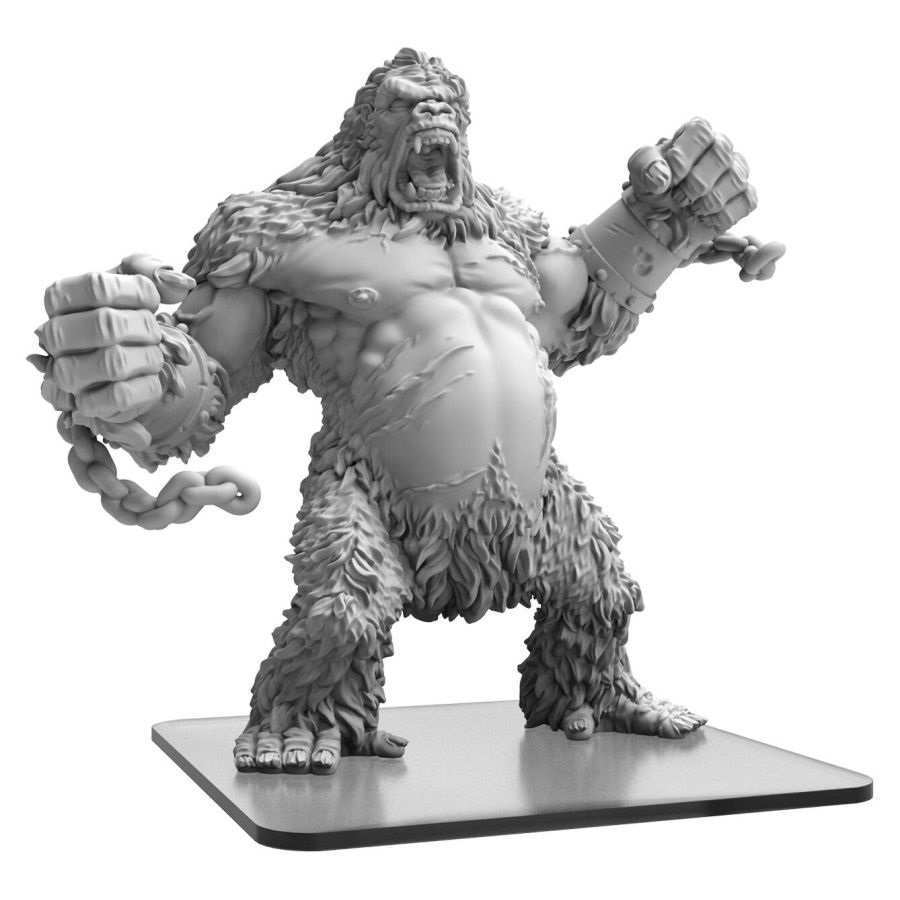 The arrival of the Destroyers has drawn the ire of many great beasts once hidden in the untracked jungles and wilderness places. One of the greatest of Earth’s savage defenders is known as King Kondo, a primate of gargantuan proportions with a rage to match his height and girth. Kondo has the strength to punch through buildings or lift and throw entire trains. He has no reason to trust humanity, particularly after a disastrous attempt by a secret multi-national task force to take him captive and use him as a chained weapon, but most of his ire is reserved for unnatural horrors like the Planet Eaters.

King Kondo is an in your face monster that can be added to any Protectors force. He leads his fellow apes in combat, inspiring Empire of the Apes units in your force to hit harder when they make brawl attacks. His High Mobility allows him to move over models and hazards with ease and his Grappler ability prevents his enemies from being as mobile. When he goes hyper his massive punches do more damage and he gains power dice when enemies injure him. 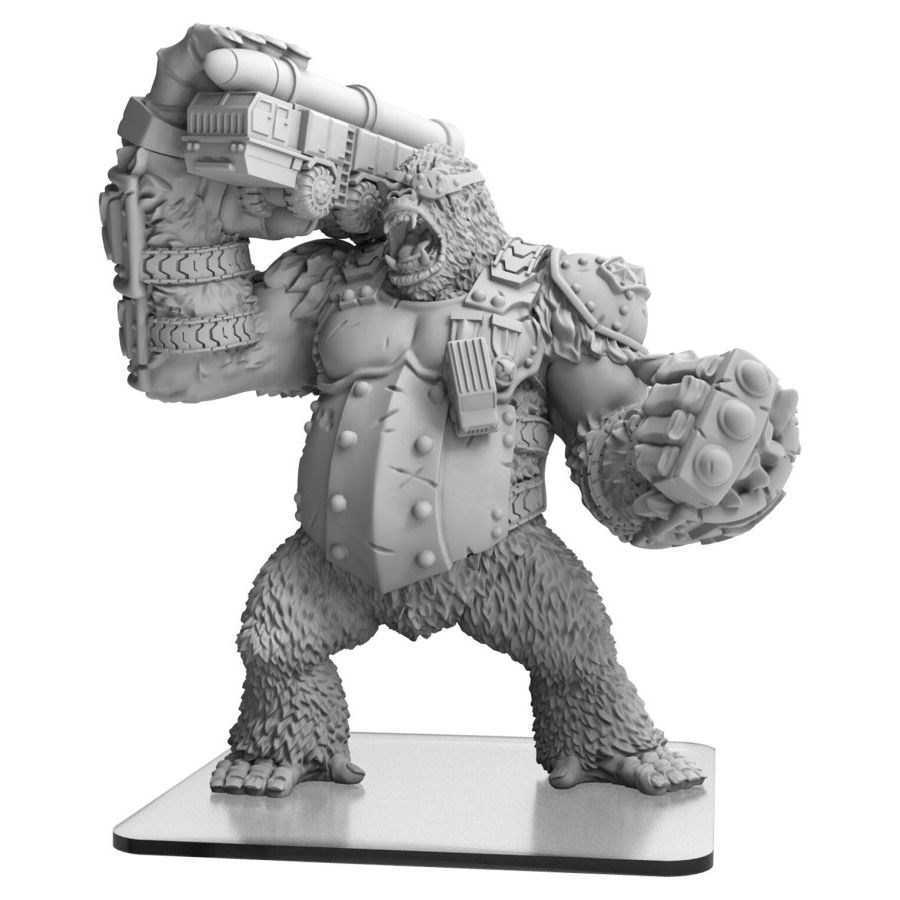 Though he is not their king, General Hondo is the Empire of the Apes’ greatest military leader. Hondo is responsible for the widespread seizure and deployment of human military hardware by ape troops fighting Earth’s potential destroyers. He is also fond of military uniforms and medals. Hondo’s methods suggest a degree of tactical and strategic depth once thought exclusive to Homo sapiens. He enjoys bringing the missile-launching platform with him and savors the resulting explosions, another trait shared with his human counterparts.

General Hondo is a long-ranged support monster that can be added to any Protectors force. He shelters his fellow apes, helping them to safely cross the city while his Explosive ranged attacks punish any enemy units that stand too close together. When he goes hyper, he rapidly reloads his missile launcher to put out even more damage, and he inspires his units to hit harder with their ranged weapons as well. 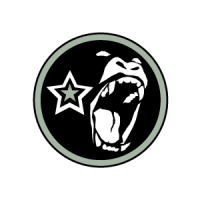 This Empire of the Apes look incredible and I’m excited to paint them and get them on the table. If you are looking for some paint scheme inspiration, check out this video of Privateer Press painter Jordan Lamb and his red and white King Kondo!

Which Empire of the Apes model are you the most excited for?