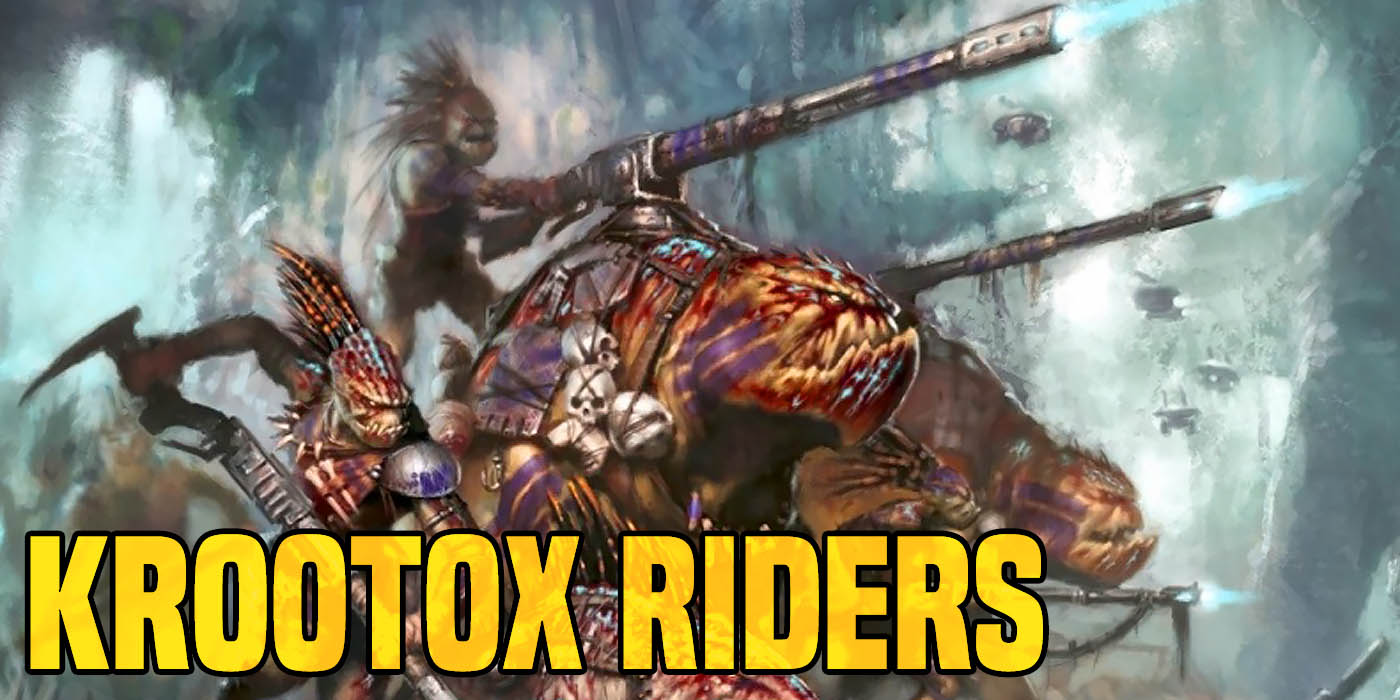 Today we explore one of the hulking denizens of Pech, a subspecies of Kroot, the Krootox Rider.

Charlie here from 40kDiceRolls to talk about your favorite carnivorous bird people.

A hulking creature often found alongside Kroot Carnivores, Krootox’s broad back provide a suitable mobile weapon platform. By mounting a heavy cannon-like gun onto their shoulders and back, an agile Kroot Carnivore can climb atop the Krootox to operate the gun. They’re fiercely loyal and defend their comrades, whom they refer to as “herd brothers,” whom they protect to the death. 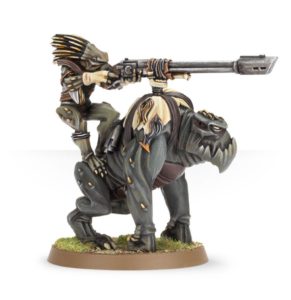 On the tabletop, Krootox Riders units consist of anywhere from 1 to 3 models, each model being a Krootox and its rider.

If you’ve read the Kroot Carnivores article then you know there’s something that draws me to Kroot models. Whether it’s the stark contrast in look and feel to the main T’au models, the impressive conversions people have done with them, or something else entirely, I really dig Kroot. But much like we saw in the Carnivores article, the Krootox suffers from many of the same issues – namely a clunky and minimalist set of special rules with limited weapon load outs that ultimately leave it in a bad place.

Most comparable to an autocannon, the Kroot Gun is excellent in the fact that it’s 48″ Rapid Fire 1, so even on the first turn with typical deployment separation, you’ll almost always be in rapid fire range. Two shots are great when you consider that the BS4+ will mean that on average, one will miss. Lacking significant AP, the Kroot Gun will probably struggle to take out even light vehicles. Infantry will be a more efficient target in general, with the D[D3] coming in useful against multi-wound models (Primaris, looking at you).

With 7″ movement and auto-advancing 6″ thanks to Agile Brute, the Krootox can easily cover significant ground each turn, which just may be one of its best qualities. A turn two charge would be well within the realm of possibility. Should the Krootox get in close combat, you’ll find it tolerable, but not much better than that. With just two attacks, even though it has BS3+, you will struggle to make much of a dent in things. Yes, the S6 is great against chaff or screening units (because you should never try and run the Krootox into anything that even remotely looks like a dedicated combat unit), but with no AP, and D2, you’ll need the weight of dice to accomplish much. But again, two attacks hardly allow you to achieve this. At best, the Krootox could slightly inconvenience a group of Guardsmen while in close combat or touch a tank.

Going back to that guaranteed 13″ movement by Advancing, the Agile Brute special rule makes that seem like an attractive choice. Unfortunately, the Rapid Fire Kroot Gun that it is will no longer be able to shoot. It’s almost as if its rule set promotes both agility and some sort of shooting or fighting prowess, attempting to give you a hard choice when choosing which route to take. Unfortunately, this is far from the case. Its shooting/fighting is mediocre at best, so when it is hampered or completely negated by advancing, you’re left with a unit that seems largely ineffective.

I could stomach all this and still convince myself to put Krootox on the board now and then as some sort of mid-field speed bump or distraction if it weren’t for the fact that they die so easily. Toughness 5 is nice, but the fact that they have a save of 6+ means that virtually anything that does successfully wound them will probably cause damage. With just four wounds, it won’t take long before the Krootox is just dead. At around 30 points, they’re not expensive, so it won’t be a terrible loss when they do go down.

Again, it seems like the Krootox was not given much thought. It would be a much stronger choice and more thematic for it to have more attacks, have special rules that allowed for some sort of innate FnP, gain special abilities when in a unit size above X amount or near so many carnivores (referencing its herd mentality), etc. What it does have just can’t compete. CA2018 saw no change to the Krootox either in points or rules, which is pretty disappointing considering how obvious I think it is that it (and the rest of Kroot) is in a bad spot. 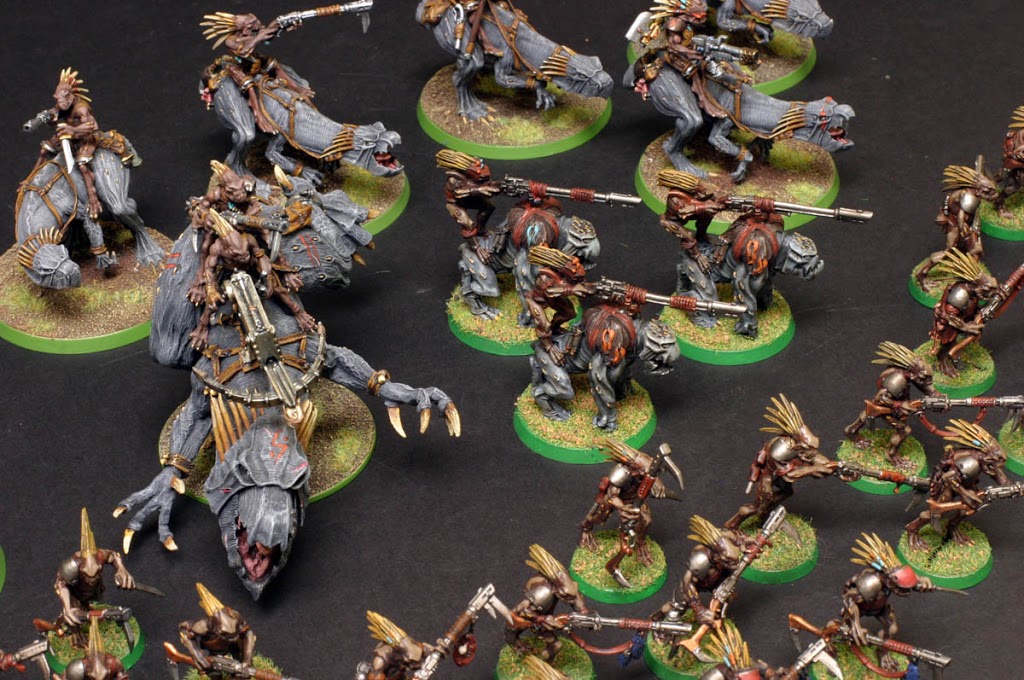 As mentioned earlier, the Krootox is easy to kill. No inherent FnP means that it will be relying on its Sv6+ to stop any and all damage. Against any type of shooting at all, this will sooner or later crumble (most likely sooner). Make sure that you’re not allowing a unit of Krootox to make their way up the board turn one to set up a turn two charge into anything important of yours. With their middling Kroot Gun plus BS4+, that’s about the most dangerous thing it can do. Make sure you take into account it’s guaranteed 13″ movement (while advancing) if the T’au player needs them to be that fast.

Overall, the Krootox doesn’t bring enough to the table to recommend. With no way to actually be defensive, it doesn’t make for an effective backline objective holder. A unit of 5 Fire Warriors would have more wounds and a better save, thus making it a better/cheaper backline objective holder. With largely ineffective or minimal shooting/close combat attacks, the Krootox won’t be putting a significant dent in your enemies frontlines, nor will it excel at being a disruption. A unit of three stealth suits would be more resilient and disruptive as a mid-field speed bump. While not expensive, per se, it cost too many points for what it does. It should either cost less, do more, or both preferably.

~What would need to change about Krootox to convince you to take them?