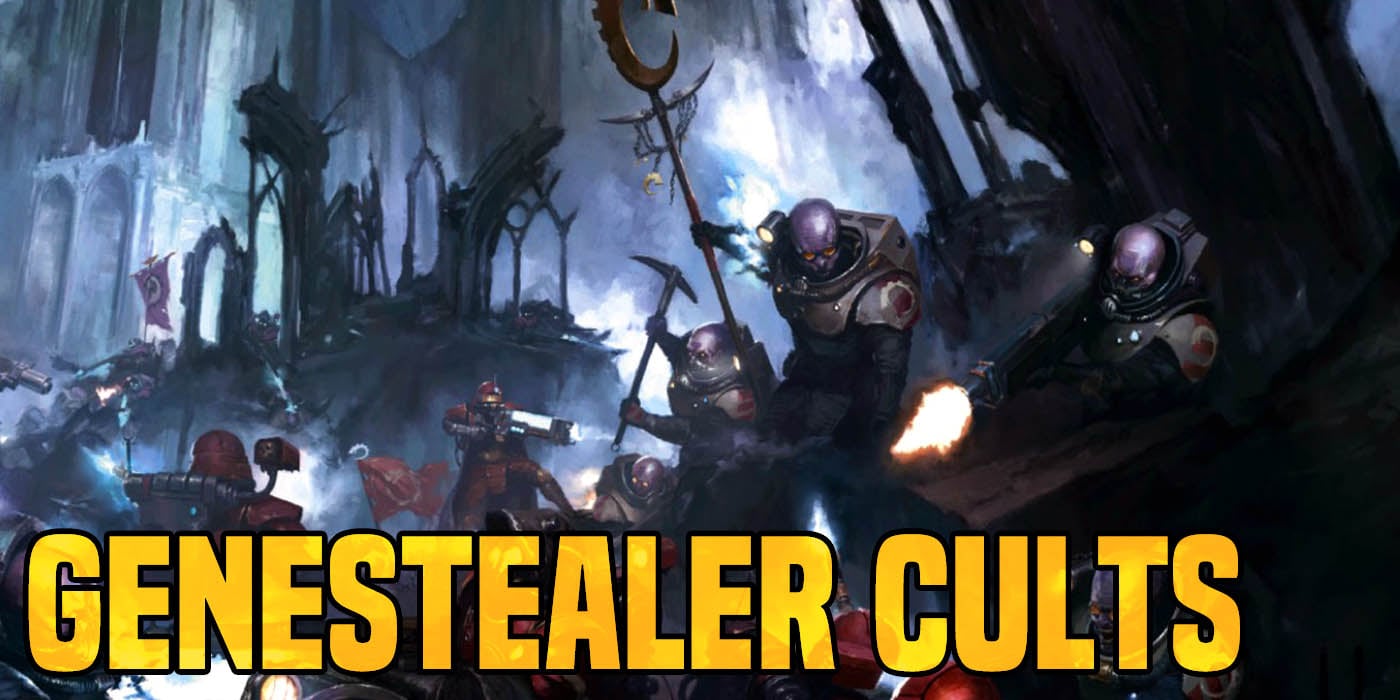 It’s time for everyone’s favorite Genestealer worshiping cult to rise up and take the spotlight in today’s faction focus for 40k Apocalypse!

The Apocalypse has come – which means for some planets, it’s starting with an insurrection thanks to the Genestealer Cults. What will this mass of revolutionaries be able to do in your games of Apocalypse? Well for starters, they are the only faction with an army-wide healing mechanic thanks to their Cult Ambush Rules:

“This enables you to throw your opponents into absolute confusion – units they thought they could attack are simply no longer there. Then, after tending to their wounds, the members of the Cult can return to the fray to sow even more discord and destruction.”

Cult Ambush not only allows you to strategically redeploy – it removes D3 damage markers from the unit! While this only impacts Light units, this is just more encouragement to field BIG squads of Light units and be hyper aggressive with them. Strike one part of the army, then *POOF* gone. Next turn attack somewhere else and oh ya, you’ve healed D3 Damage markers! 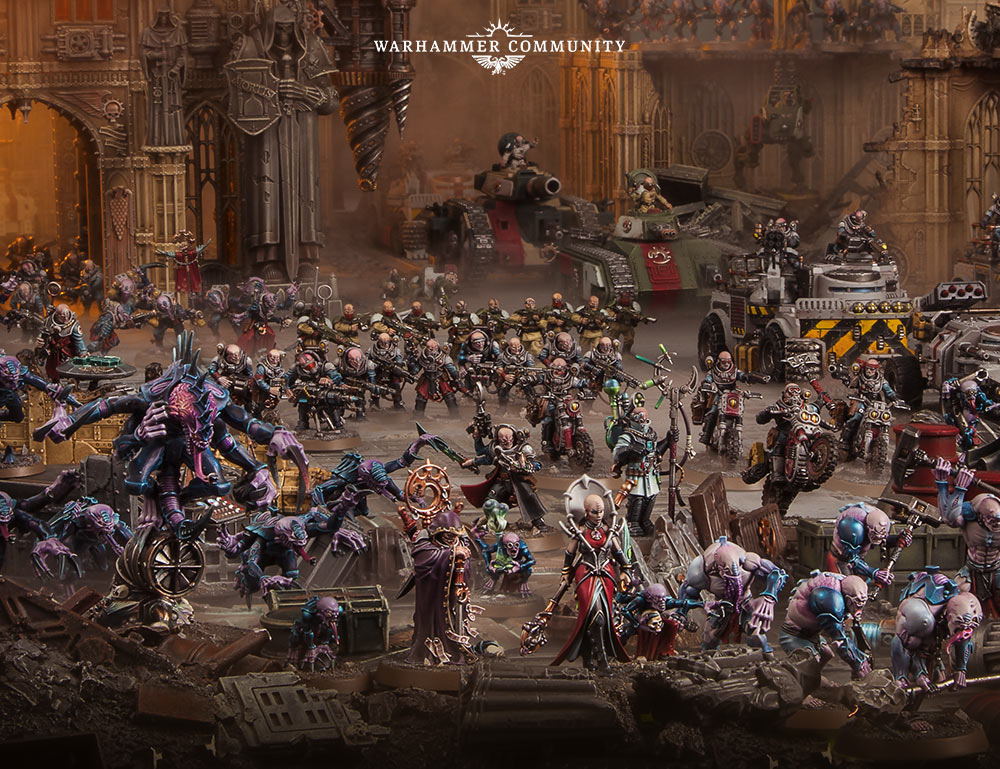 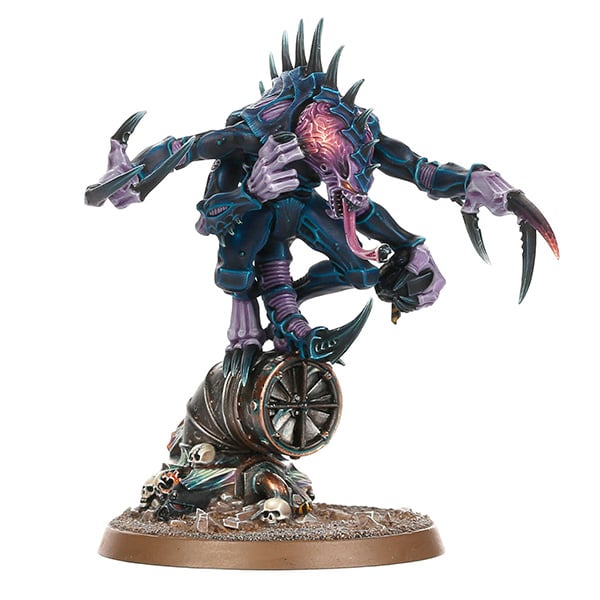 Up first is the Patriarch for the Genestealer Cults. I’ll be honest – he doesn’t look very scary in Apocalypse. With only a single wound and 7+ save, getting those Monsterous Rending Claws (while deadly) into combat just seems like quite the challenge. However, he does have two abilities that are helpful for units around him. 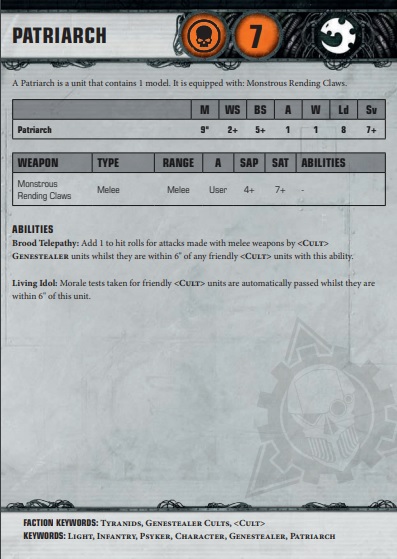 Brood Telepathy lets you add 1 to hit rolls for melee weapon attacks for all <Cult> Genestealers units within 6″. That will help those big masses of Genestealers rip apart enemy units with all the fury their four arms can muster. And Living Idol does allow friendly <Cult> units to auto pass morale while they are within 6″ as well. He’s great for keeping units around…if you can keep him around. 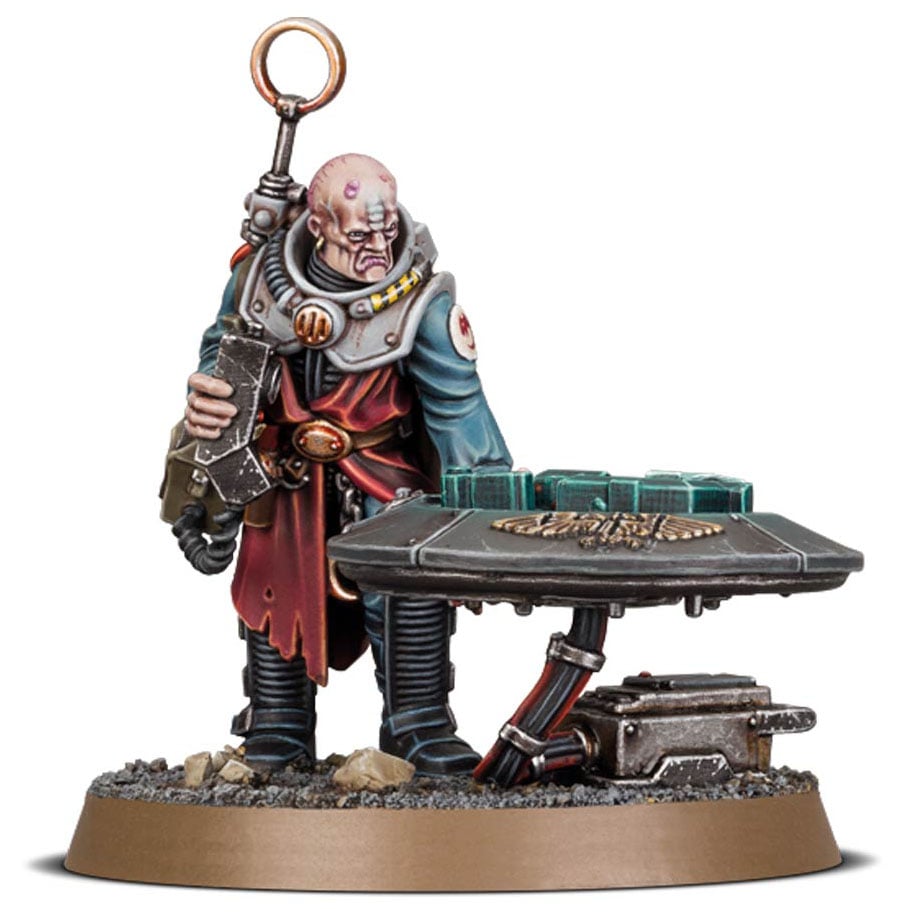 While you’re planning you attack on the enemy, don’t leave home with out at least 1 Nexos. Check out their special ability Strategic Coordinator: 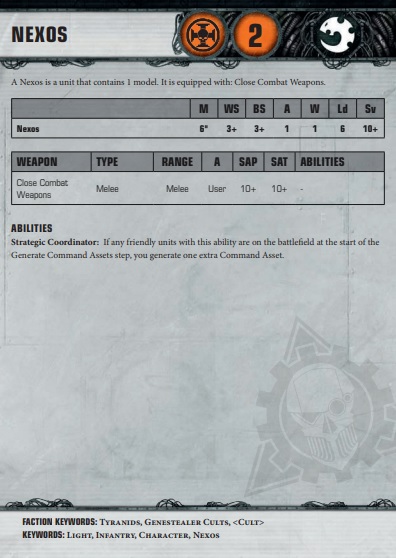 If one of these cheap units is on the tabletop, you get an extra Command Asset. It might be worth investing a few points into having a handful of these in hidden spots just to ensure you’re getting that extra Command Asset a turn. I’d pay 2 Power Rating for that option in any army as the Command Assets can really help you get out of a jam. 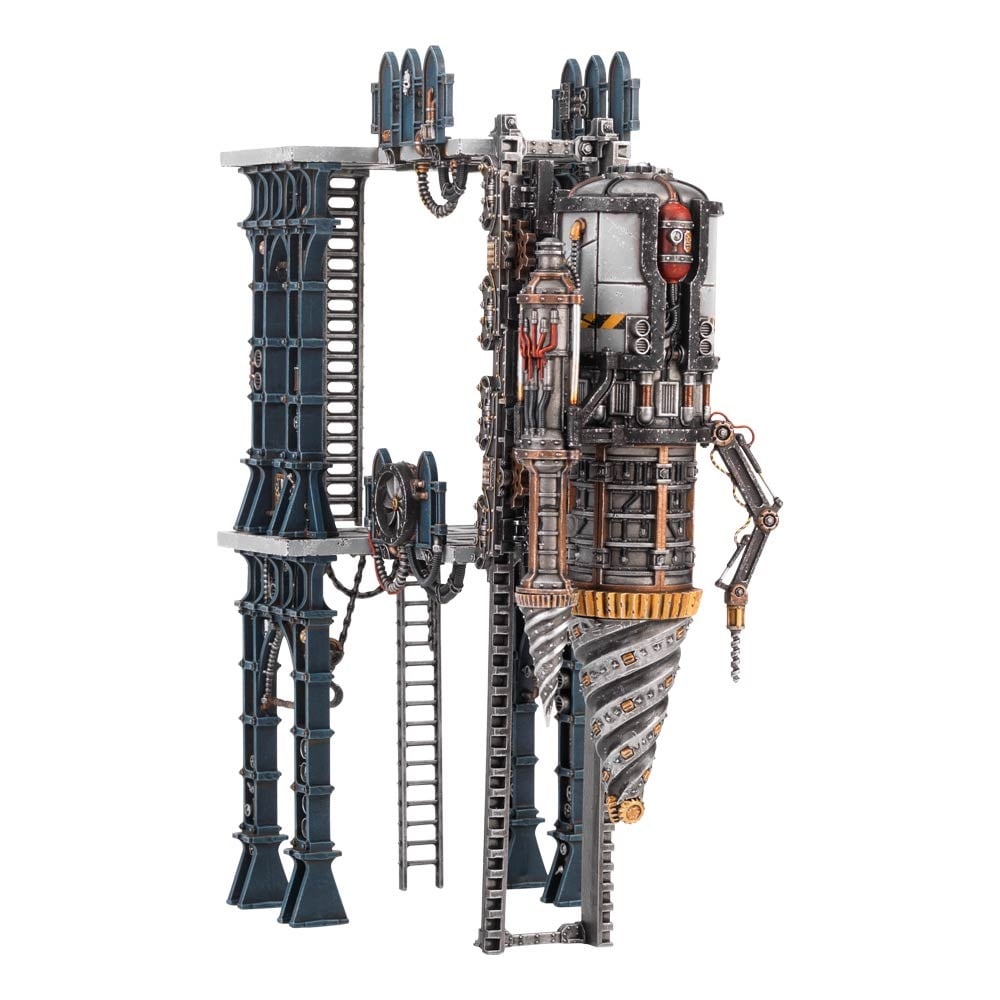 The Genestealer Cults have access to a ton of Astra Militarum units (thanks Brood Brothers). They also have access to one nasty piece of terrain in the form of the Tectonic Fragdrill: 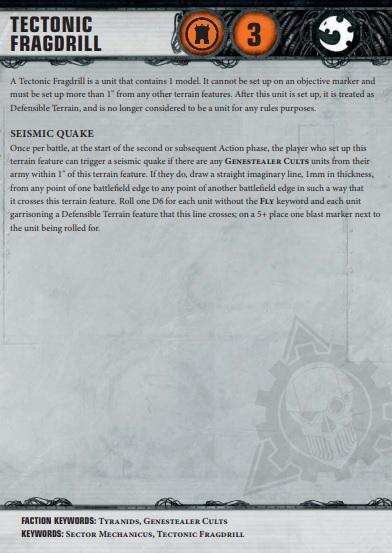 So it becomes Defensible Terrain and doesn’t count as a unit for rules purposes – which means unless you have some special rule, you can’t remove this thing. And if a GSC unit gets within 1″, they can fire it off with devastating results: 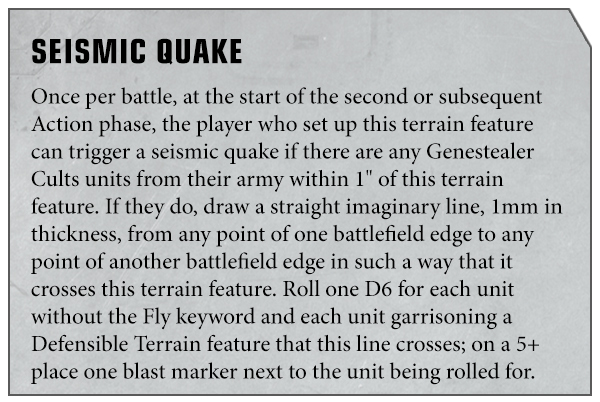 A single Blast Marker on a 5+ might not sound that great – until you realize that the line can be across the entire length of the table. This thing literally splits the table in 1/2! GSC players are going to get lots of chances to roll on depending on how big of a game you’re playing. Sure, they run the risk of hitting themselves, but that’s a risk that I’m sure will be well worth it! 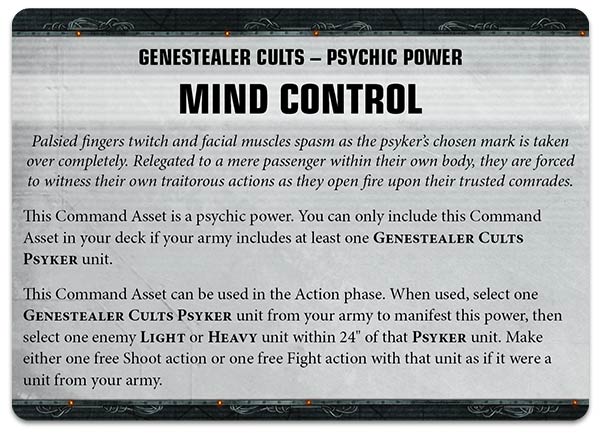 Mind Control is no joke. This is one deadly ability in 40k and it can have a big impact in Apocalypse, too. Take over an enemy unit and have it shoot (or fight) at it’s friends. I can think of quite a few units I’d want to target with this power! 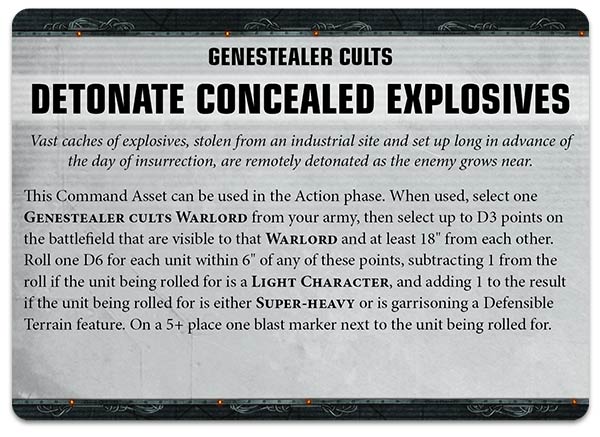 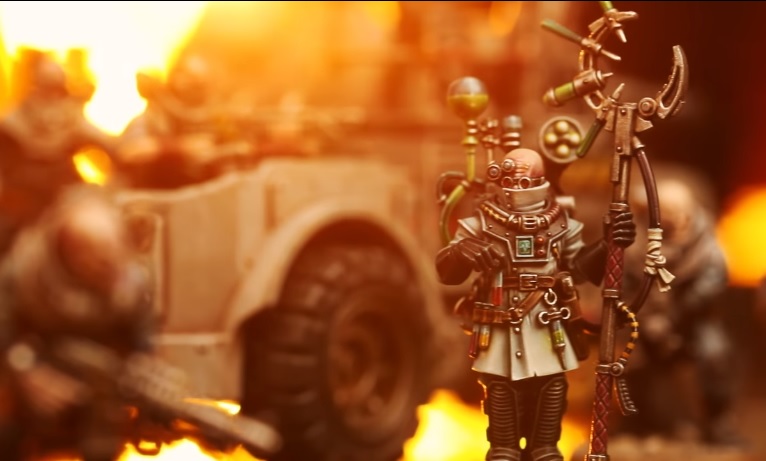 That’s it for the Genestealer Cults Faction Focus. If you want to see their datasheets, you can always download them for FREE from Games Workshop.