Competitive 40K: A League of Your Own 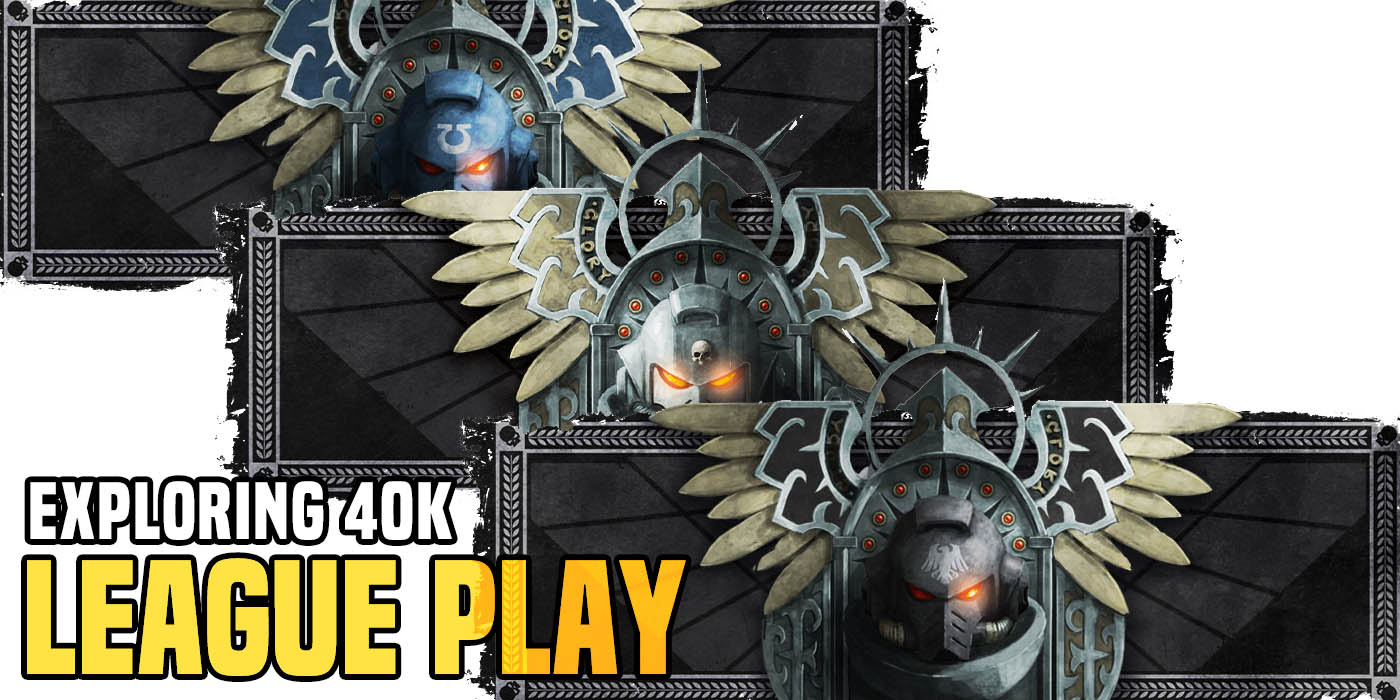 Can’t make it to a big tourney? No problem, here are a bunch of league formats you can try in your local scene!

I really enjoy going to tournaments. Whether it is to judge or to participate as a player, I enjoy playing the game and meeting new people. There are times, however, when you are unable to attend a tournament. Family, work, or finances are some of the reasons we have to adult rather than enjoy a weekend playing games and hanging out with new friends and old. Even if you are not able to make it the large two-day tournaments, or to your local RTT, there is still a way to play on a competitive level through a local league. There are a fair number of league formats you can use and I will go over a few of them so you can chose what may be best for your scene.

A Ladder League is a very simple type of league. Just like a real ladder, people are placed on rungs and must defeat the players above them, while at the same time defending their spot from the people below them. Although you usually only play against the person directly above or below you, there can be special rules so that you can play against people a few rungs up. A similar league is a Pyramid League. Instead of a ladder the shape you use is a Pyramid. This allows for more people a chance to move up and down a level. Theses types of league is nice and simple and really don’t take a lot to organize. There is no complex formula to figure out who is playing who and you can clearly see who is rising to the top. One of the big downsides is that it can get repetitive in who you play against. This is especially true as you get closer to the top. Although there are plenty of challengers for your spot, the options for you to advance get smaller as you get closer to the top.

This type of league is based off of your favorite sport, whether it’s football, basketball, hockey, etc. The players are divided up into divisions, they play the other players in their division and the winners of the divisions play each other in a playoff to determine a champion. This is an easy concept for most people to grasp as many are familiar with some type of professional/college team sport. It gives players the stability of knowing who they are going to play in the coming weeks and when the season will actually end. One of the downsides is also the strict schedule as sometimes life gets in the way and it can be difficult for people to coordinate a game. This can lead to frustration with the players and the league and will sometimes be the downfall of the league itself.

A Narrative League is basically one that tells a story while, at the same time, tries to retain its competitive edge. It can sometimes be a welcome break from just a pure competitive environment and may even allow you to try to use units or armies you haven’t used in a while. It can be very fun telling a connected story while playing your games and helps scratch that itch some players have of doing a narrative campaign. There are many different ways of running a Narrative League and is up to the organizer. Some issues that I have experienced, are similar to the ladder league in that you may end up playing against the same players, or armies. This is especially true if using a map for the league. If the organizer is able to balance the story with the schedule of games, however, this type of league can be very fun.

Escalation Leagues are mainly for those that want to build a new army or are just starting out in 40K. It is really meant to ease those players both into the game itself and into a competitive setting. As players begin to build and play with their armies, they begin to learn the rules of the game and how their units work and interact. Many times organizers will also include some type of narrative element in the game but it is not required. This type of format is also a good palette cleanser for those that may want to take a break from the more competitive side and also to help mentor those just starting out,

This type of league seems to be picking up steam. Ideally you would have about 26 players to start. they are placed in 2 “pods” of 8, based on skill or just random, and play X amount of games against people in their pod. After the season is over the bottom 2(for example) will drop a pod, while the top 2 (for example), will move up a pod. Because the pods are based on how people perform during the previous season, you don’t have top players only trying to play against the newer and less experienced players. This also allows new people to the competitive scene to get their feet wet by coming into the league at the bottom pod with other players of, hopefully, the same caliber. Some downsides, however, is that your need a good number of players to start it up, and there can be issues with players not finishing all their games. For an example you can see our local league HERE.

~That’s all for this week. I hope this was helpful and have giving you ideas about starting your own league. Let me know what you think, and your experiences in a league, in the comments!