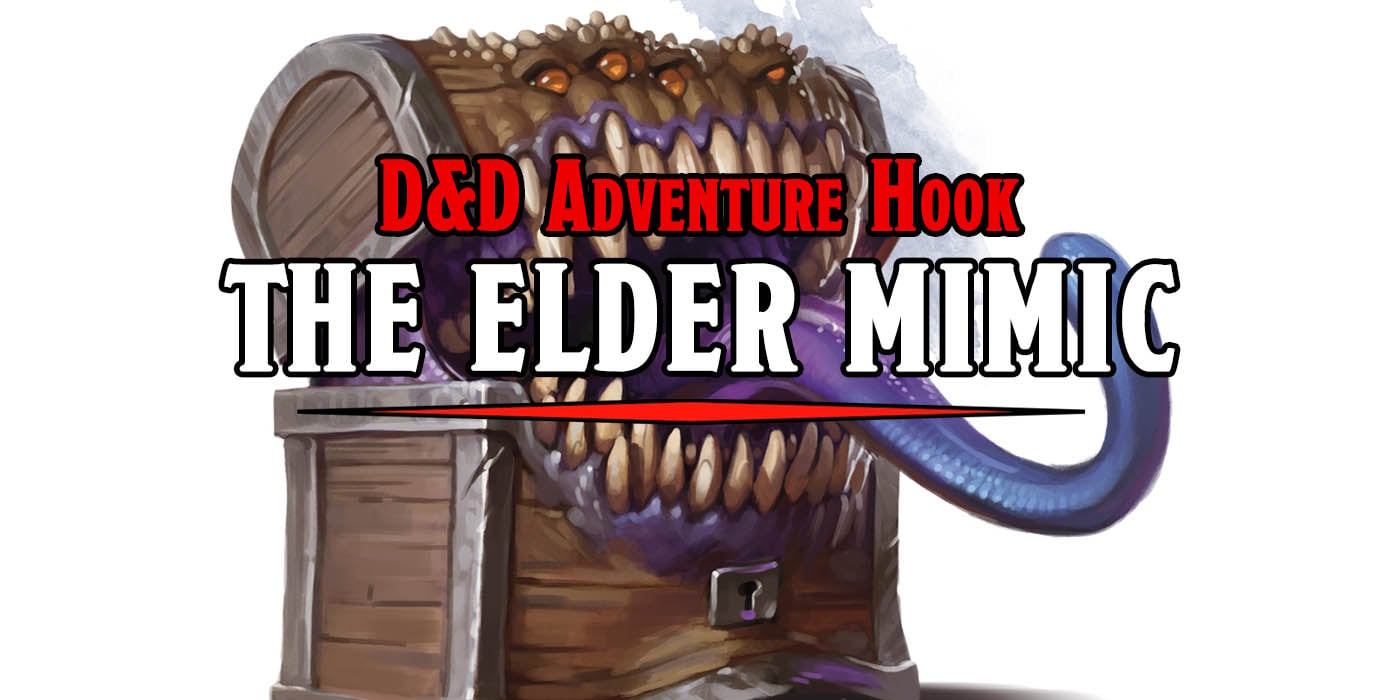 A town is plagued by mysterious disappearances that seem to strike at random. At its heart… a colony of mimics led by something ancient and monstrous.

This adventure is meant for characters of 6th-8th level.

People have been disappearing from around the docks, lately. As the PCs wander into town, they find a community on edge. Victims of all rank, status, and standing have been disappearing near the docks. There’s no pattern to the victims: beggars, dockworkers, some of the Gulls–a notorious thieves’ guild–even a noble out for a late night stroll; all have gone missing. The city watch is desperate for information, the Gulls are eager for revenge. The tension’s going to break, and soon. One of the PCs allies asks them to look into the disappearances before things get out of hand. But something waits for them in the dark, ancient and hungry…

All manner of shady dealings go down on the docks as the people try to figure out what the killer is. One disappearance in particular seems suspicious–the second-in-command of the Gulls, the former king-of-thieves in this part of the world, has not been seen in days. Tracking down the missing thief leads the players down through the docks and on a merry chase where they are ambushed by would-be assassins, hoping to take advantage of the chaos.

But ultimately they track the missing Gull to a storehouse. There they find his remains. Inside a massive cargo container are crates and barrels and bones. The remains of the people who’ve gone missing. And there are the real culprits behind the disappearances–a colony of mimics who have been preying upon the docks.

After fighting off the mimics and finally ridding the town of this murderous menace, the PCs are rewarded, receiving thanks from the town, and in particular one of the cargo companies, who points out that they’d been waiting to move their merchandise until the docks were safe again. And now their ships, laden with cargo have left–if they look close it’s still in the harbor. But as the ship sails out of sight, the PCs will catch a glimpse of something that leaves them wondering…

Read on for more details, or skip below for all the stats you’ll need.

Orast is a town that’s been hit hard of late. People have gone missing, and panic has begun to creep in at the edges of town. Not long ago, people started going missing. No one noticeable at first, a few beggars, or a dockworker, nothing worth brushing off as anything more than a run of bad luck.

When the guards went missing and everyone thought it was the thieves. Then the thieves went missing and nobody knew what was happening. Notably, two members of the Gulls haven’t been seen in their usual haunts. With their disappearance, rumors have taken on a panicked life of their own–nobody knows what is going on. So the docks have been locked down. Ships aren’t leaving, and trade is coming to a halt.

If you’re looking for hooks, here are a few ways the PCs might be roped in to the adventure:

At which point they find themselves embroiled in the mystery.

Players who make a DC 14 Persuasion check will learn about the halt to shipping and that most of the disappearances have happened at the docks. And all have happened at night. Rumor has it that it was the Gulls, at first, but then two of their “friendly faces,” Edlin Alric, and Velmar the Vest–runners of the local illicit gambling/whatever ring–failed to show up for a big tournament that would’ve lined their pockets. Players will also learn that Antonia Devoras went missing on patrol. She’s one of the earliest disappearances. There’s been a range of victims, but the one thing they have in common is hitting people in isolation.

Players who make a DC 13 Insight check will find no pattern to where the disappearances are happening. The attacks are at random. But they all are around the docks–and there are no bodies. So that means the remains are probably being disposed of or hidden.

Players who make a DC 17 Nature check will realize that the fact that no bodies have been found, and the isolated nature of the attacks seems to indicate some kind of predator. Perhaps it isn’t a killer, but a monster.

Players who make a DC 18 Insight or Persuasion check (or players who are friendly with the Gulls) will learn of another disappearance. The second-in-command of the Gulls, Arkos Treng has been missing as well–though he never ventured down to the docks. He used to run the Gulls, but lost his position as the city grew. He was once called the king of thieves around this city.

Investigating the disappearances should lead the PCs down to the docks. Tracking the disappearances, or maybe the bizarre hunting pattern of the creature–or even just wandering around, they are attacked by thieves who are looking to take advantage of the chaos. Initially the gang might even seem to be the ones behind the disappearance. They emerge from the darkness/mist with their own murderous intention. They try and take out the PCs, but will retreat once two of their number have fallen.

The aftermath of the fight leads the PCs to a locked-down storehouse (one that’s under guard). This can be either because the assassins have lead them here in an attempt to hide, or more likely, they’ll find information about the storehouse on the dead bodies after the PCs have dismantled the ambush entirely. At any rate, the PCs find themselves at a storehouse belonging to Ragnar Vedik where goods are sitting, waiting to be used. And apparently, one where the assassins wished to flee to (a note one of them has mentions that it was a favorite of Arkos’).

Inside, they find a vast store of goods. A small annex to the storehouse seems to hold crates from around the world. One is open. Inside, are the bones they’ve been looking for. Including the freshly (well relatively anyway) dead body of Arkos. If an assassin escaped, his corpse is in here as well. Bones litter the floor of this area–scattered about between a few of the large crates and myriad chests. 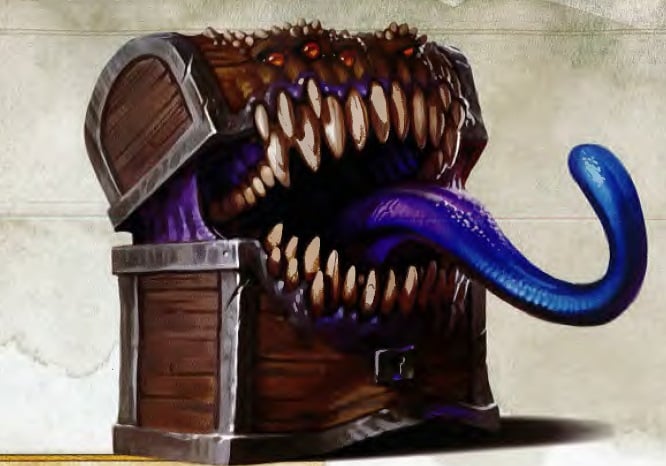 As the PCs approach, the crates animate and attack. The storehouse annex turns out to be a nest of mimics. Including two greater mimics (see below). Having been found out at last, they attempt to kill the PCs. But, assuming the PCs are victorious instead, they will clean out the mimic colony and recover valuable treasure from the remains contained within. Here are the bones, effects, and other items of the missing people. 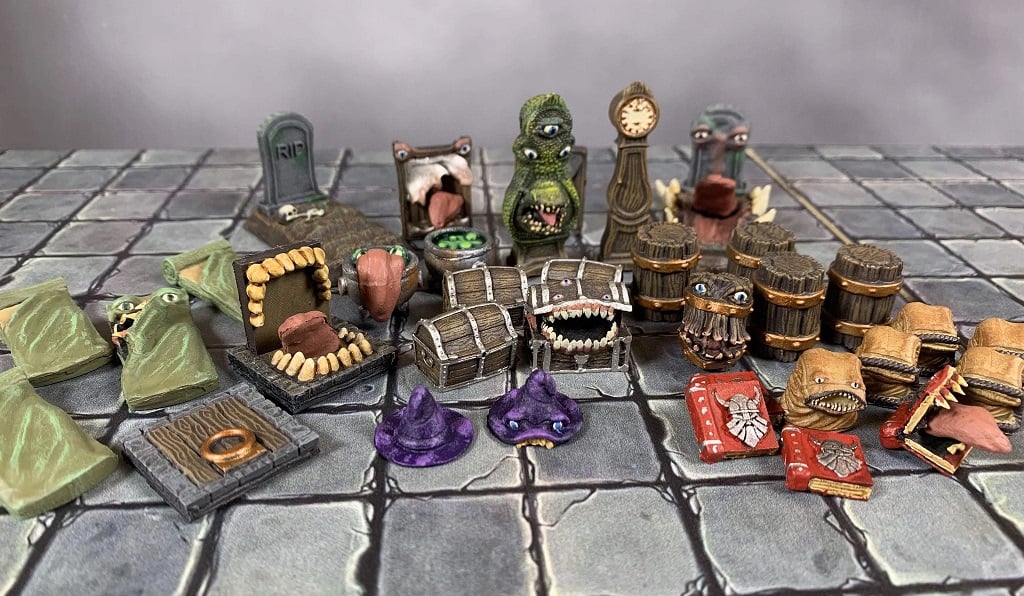 If you’re looking for minis for this fight, you might try the mimic invasion kit from Galladoria Games

The next day, they are hailed as heroes of the town. Ragnar Vedik presents them with a special reward of 2,500 gp, near his storehouse, thanking them for helping reopen the port. He admits that he was sad it turned out some of his merchandise turned out to have been replaced with mimics–but, gesturing to a ship setting out to sea, he points out that he stands to make a fortune.

As the ship disappears into the distance, safely outside of dimension door range, well past the docks–the PCs notice two things. The first: the annex to the storehouse is gone. If questioned, Ragnar points out that his storehouse is as it always was. The second thing they notice is the ship. A long pseudopod exudes from the mast. The whole thing is a massive, elder mimic. They realize the storehouse they were fighting in, could have eaten them. Slowly, the mimic/ship disappears from view.

At this point, the adventure is over. But you better believe we’ve statted up the Elder Mimic so that you can use it as a recurring foil in your campaign. We recommend using it sparingly, maybe one night the PCs stay at an inn, stabling their horses. The next day, their horses–and the stable–are gone. The Elder Mimic strikes again.

And then no sign of it for months until the next time they lower their guard. The elder mimic is ancient, rumored to be one of the first ever created, it is patient, and it will take its time with its vengeance.

Multiattack. The greater mimic makes three attacks: one with its bite and two with its pseudopods

Recommended dosage: use 1 assassin, accompanied by 1 veteran, and 2 thugs per player.