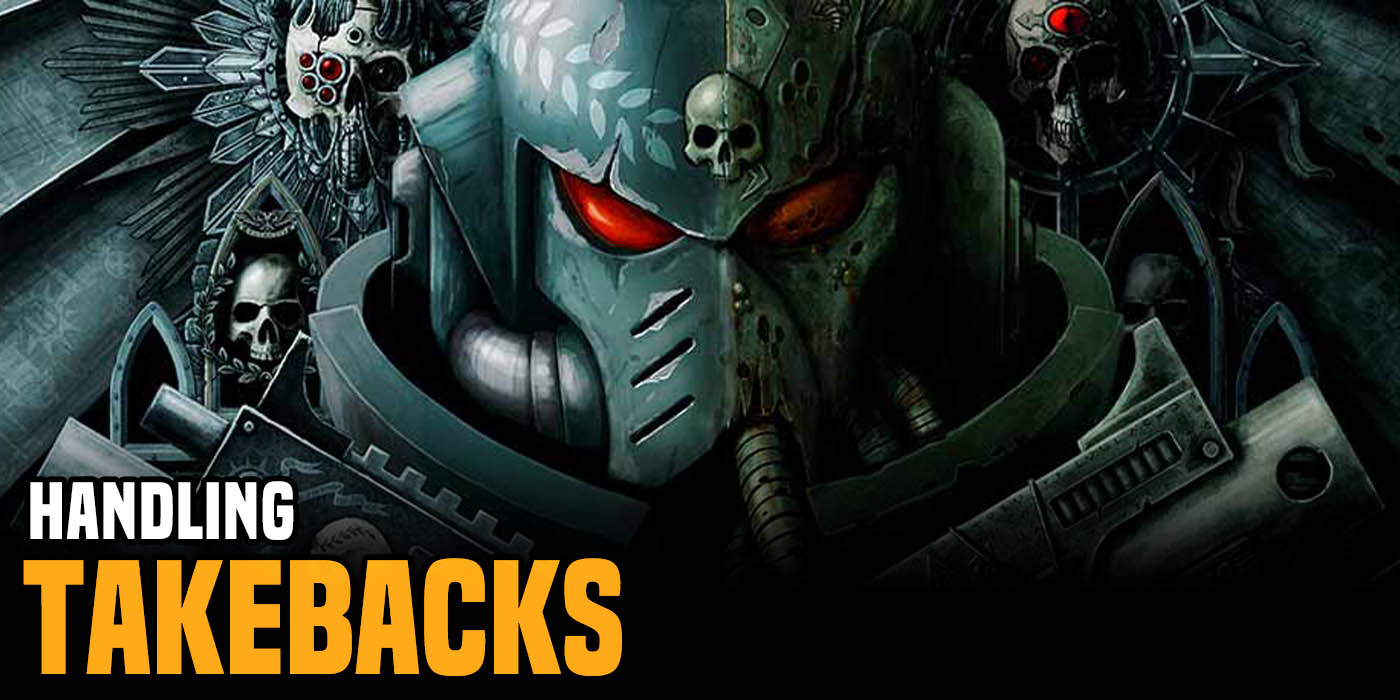 It happens to everyone. Someone forgot something and asks for a takeback. Now what?

As we have previously discussed, there are a lot of moving parts in an average game of 40K. Add in the fact that you are now playing in a tournament, competing against other players that are usually complete strangers, and that adds another layer of complexity and, a lot of times, anxiety to your games. There are times when you can forget things and remember them the moment after, or your opponent doesn’t remember things and forgets to do his action. When a player realized they forgot something there is that key moment when both players kind of freeze, look at each other, and then proceed to discuss how to handle it. Many times it is handled in a friendly manner. Other times it can be a contentious affair and a nearby friend, or judge if at a tournament, will be asked to decide the outcome.  There are a few names for this type of situation. Mulligans, which is common in the card playing world, redo, rewind, sometimes even rerack if it was that bad. The word that most competitive players use is the word “Takebacks”.

So what is a takeback? It is what you think. It is the act of allowing an opponent to change something that they had done in the past. In most cases it is when a players forgets to do something. It can be things like forgetting to move a model, forgetting to cast a psychic power, forgetting to shoot with a certain gun or at a certain target, or forgetting to bring in that unit in deepstrike, especially since it is turn 3. There are a lot of ways that players forget things and then ask if they go ahead and do that action. This brings up a quandary for the opponent, usually. Games Workshop has always sold their games as a “beer & pretzel” game. An environment where you and your chums play a rousing game of 40K and have a few adult beverages. Any issues with rules can easily be rectified with a hearty discussion and a handshake, or, even simpler, with the roll of a die. This also ties in with an article I wrote earlier about the Spirit of the Game. Games Workshop invokes this often and is sometimes used in examples of rules interpretation. They also talk about this when they discuss what to do when things like asking for takebacks happen. They ask the players to resolve it in the Spirit of the Game and move on. For a lot of us this attitude was instilled in us when we started playing, usually as casuals, and becomes something that wars with our competitive side. On the one hand you don’t want to seem like a jerk, or poor sport, by saying “no”, and on the other hand you want to win the game and move on to the next round. It’s not your fault they forgot something.

Yes or No – You Decide

The thing about takebacks is that you are not required to give someone a takeback. It is merely a courtesy you can provide if you so choose. There is nowhere in the rules where it says you HAVE to give someone a takeback. Now, a tournament may allow it, but then you will at least know ahead of time. So the next question is “Should you allow it?” The answer is different for everyone. Some people give no quarter, and ask for none. They expect for their opponent to own up to their mistake just as they themselves would own up to theirs.  Other players may give them one takeback and that’s it. Some will allow it depending on their opponent. So if their opponent seems okay with takebacks, then are are ok with them. And then there are those that don’t care and will allow as many takebacks as they want. These players usually are there to just have fun or are good enough where it doesn’t matter what their opponents do. In all these cases, it is extremely important that the players talk to each other and clearly lay out how they are going to handle takebacks. As with many things, there may be the need for some compromise. In the end, whether you allow them or not,takebacks are a part of the competitive scene, so it is important that you know how you want to handle them and to let your opponents know.

~That’s all for this week. Be sure to let us know what you think, and how you handle takebacks, in the comments section below!