D&D: Eberron Rising From The Last War – The BoLS Review 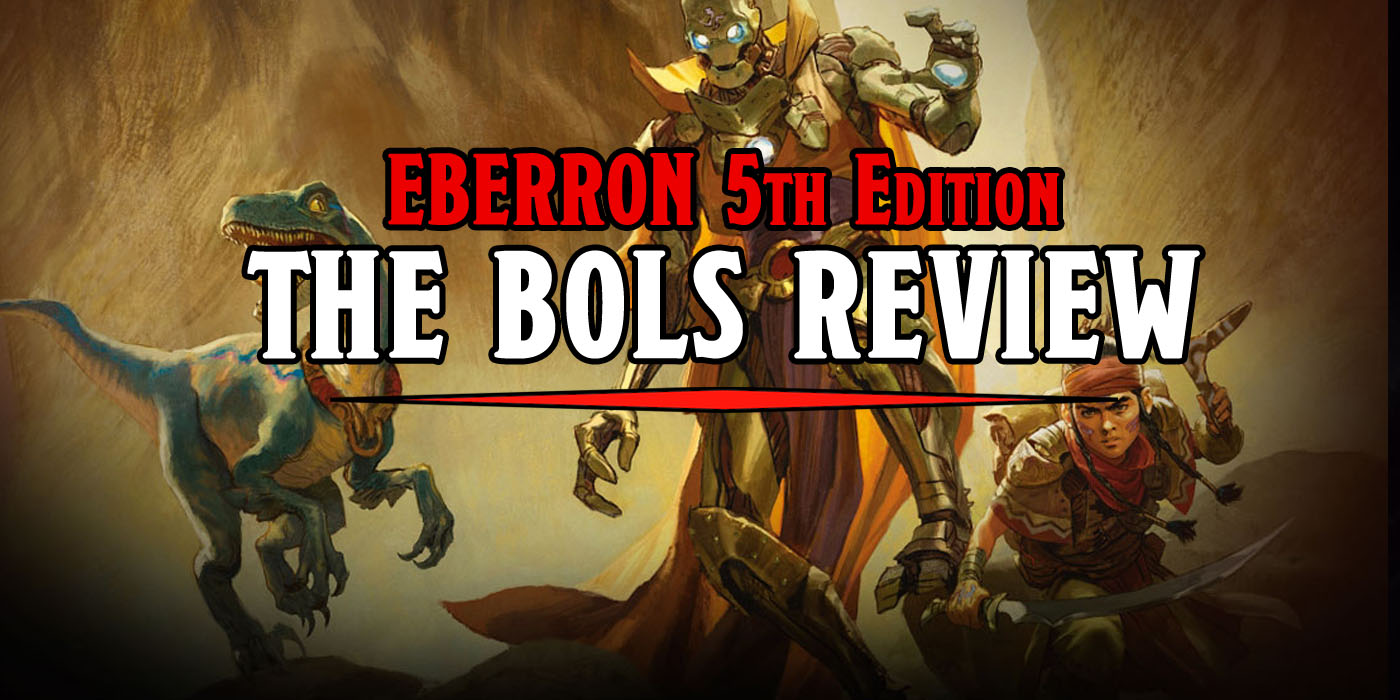 Eberron: Rising from the Last War brings magic robots, post-war highs and lows, and industrialization to your D&D game. Here’s what we think.

When it was first released in 2004, Eberron introduced industrialization and pulp action and mystery to D&D campaigns the world over. Coming in at the tail end of 3rd Edition (shortly before the advent of 3.5 a year later), Eberron managed stands out among other campaign settings. With its blend of magitech innovations, Dragonmarked Houses that might resemble corporations as much as they do noble families, and its unique Planar Cosmology–the world is made up of three dragons, the planes orbit their bodies, and that’s just the beginning–Eberron doesn’t feel quite like any other D&D world. 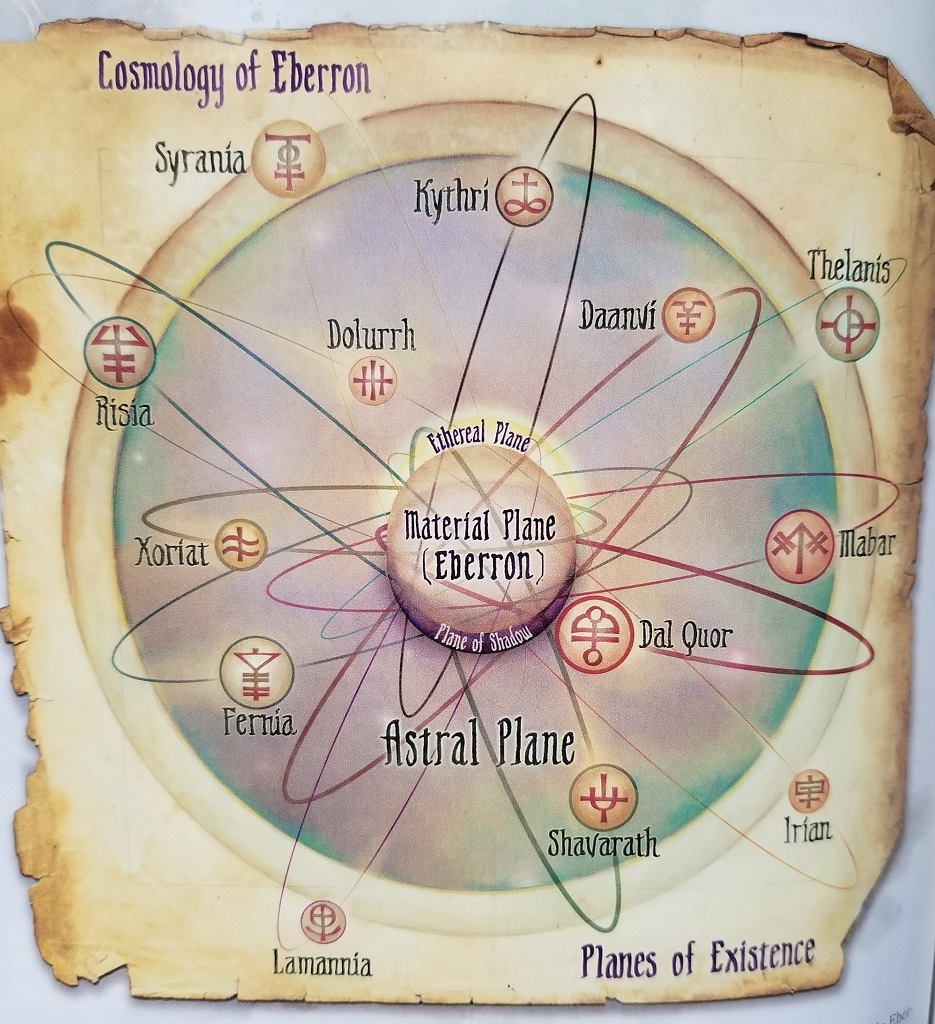 Part of it is Eberron’s modernity. It’s D&D at the turn of a century. The whole setting rests in a post-war lull where the tensions between nations have cooled but not ceased, where spies and saboteurs lurk in the shadows, where criminals and cultists vie for control of illicit resources. And in the background, a planar invasion is quietly taking place, while a band of Druids and religious zealots fight monsters from below and without. In short, Eberron is a lot like your typical D&D setting except for all the ways it exactly isn’t.

Everything that you know in D&D is still here. You’ll find halflings and orcs and dwarves and then some–Eberron introduces four new player races, including the sentient constructs known as Warforged–and yet while it’s familiar, it’s not too familiar. The typical fantasy elements are subverted in some way. Expectations are taken in different directions. There’s an ancient elven empire, yes, but they fractured into a bunch of undead-worshipping elves who isolated themselves from the world, and a more nomadic tribe of desert raiders who are pushing the bounds of their new nations. The great world-wide conflagration didn’t end with good triumphing over evil. It ended much the way wars typically do in our world: messy and with no clear winner.

Eberron is a world of catastrophe and triumph all wrapped up in innovations. As newspapers report on the events of the goings on, and the magical equivalents of railroads and airplanes carry people across the continent, society is coming closer together for better and worse. Arcane artisans known as Magewrights provide magical gaslamps and ensure that most modern inhabitants of the world enjoy marvels that would make another world envious. 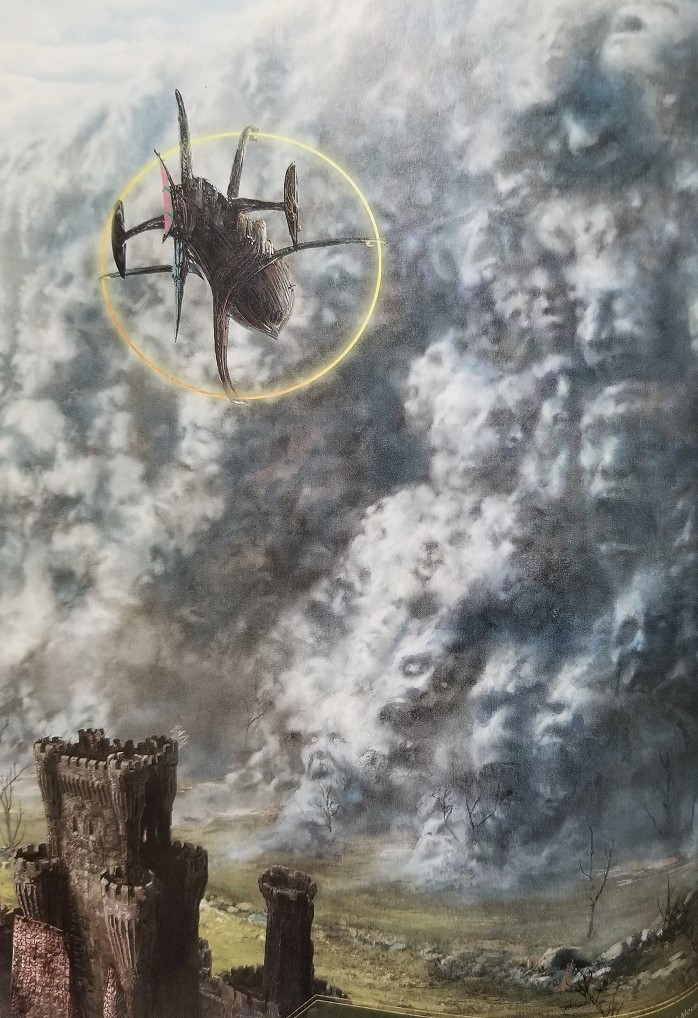 All that to say, Eberron plants its flag firmly wherever it appears. And with 5th Edition we have our best Eberron yet, and it comes down to three things: theme, character, and adventure. Eberron: Rising from the Last War delivers on the promise of Eberron’s core setting at just about every turn. It knows exactly what it is setting out to do: teach players and DMs how to play in Eberron. When you read through the book, you can’t help but feel the tone of Eberron dripping out of every page.

Whether you’re reading about the various Dragonmarked Houses, or the magical innovations that power airships; or going through player centered material like Kalashtar or Changelings or Warforged, you get a sense for how they fit into this world. As you read through the different patron backgrounds, you’re immediately given ways to insert your group into the story of Eberron. There’s a whole section on how to build and run adventures in Eberron. The game wants you to play in this amazing sandbox full of roleplaying tools and toys. And it not only tells you what to use but suggests how to use them–which is helpful, because there’s a lot to digest in Eberron. 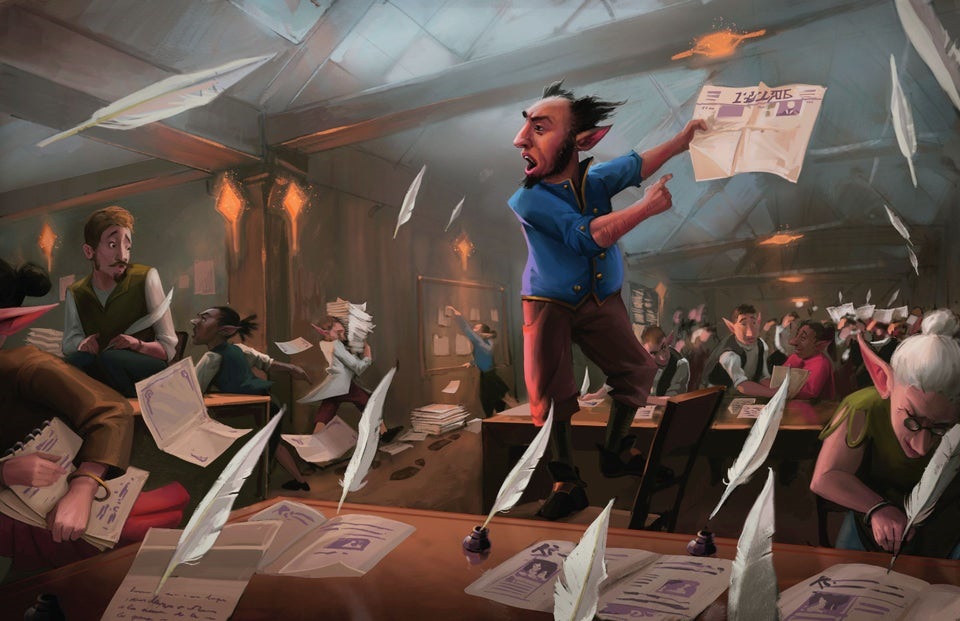 To start with, it helps to understand what Eberron is. And the book introduces you to seven key things to understanding the setting. These are the Seven Guidelines to what makes Eberron feel so distinct. Each touches briefly on an important theme or element of the world, such as in the fourth entry on the list, A Continent of Adventure:

Eberron embraces swashbuckling action and pulp adventure while adding a layer of noir intrigue. Stories don’t always end well, and there isn’t a perfect answer to every problem. The Last War turned old allies into bitter enemies and destroyed an entire nation, leaving behind terrible scars. Crime and corruption lurk in the great cities of Khorvaire. Hidden dragons shape the course of history, and sinister fiends influence the dreams of the unwary. Yet mortal greed and ambition might prove more dangerous than any dragon or fiend. This darkness affords opportunities for a group of bold adventurers to make a difference—for better or for worse.

Right away you understand what Eberron supports. From there you’ll get a very brief overview of the world, including a four page spread centering on the Last War. This was the big world war that scarred and shaped the world–the 5th Edition team have stated in the past that they want to bring the aftermath of the war to the forefront of the game in this book. And in order to do that they need to contextualize the Last War, which they do. For the most part. There are a few places where it feels like the post-war vibe drops off. Either because the lands are far from the front–but that doesn’t mean that life hasn’t been impacted by the war. For my part, I’d love to see them add some tables or something of elements that have been changed by the war in each of the nations to help convey a world in progress, still reeling from what happened.

For now let’s talk about what players get out of the book. Because this is a Campaign Setting with something for everyone. If you’re a player, you’ll want all the new player options, which include four new species to choose from: the doppelganger-blooded Changelings, who can change their form into anyone, the bestial Shifters, who call upon their animalistic instincts and shift into a hybrid form, the Kalashtar, who represent the last hope for the plane of dreams–refugees and rebels from a conquered world, and the Warforged, who are magical robots built for a war that ended decades ago and are now left to figure out where they fit in the wake of everything else.

Each of these was introduced in Eberron back in the day, and has been updated from their original appearance in Wayfinder’s Guide to Eberron. The Warforged in particular have seen some heavy changes. The Warforged suboptions like Scout or Juggernaut or Envoy have all disappeared. Instead Warforged get a permanent +1 to armor class, as well as a +2 Constitution and +1 to a stat of their choice. They also are constructs, and as such, are immune to sleep, disease, and do not need to eat, drink, or breathe.

Players can also choose form the Dragonmarked Houses. Each of these is a sort of supplemental subrace, replacing High Elf or Wood Elf, for instance, with the Dragonmark features. It’s quite an innovative way to represent the Dragonmark. Each of the Marks has its own associated house that is a powerful guild in its own right and is responsible for overseeing some aspect of Eberron society like transportation or bodyguarding or scribing. Or you could pick the new Orc, which no longer has an Intelligence penalty, and belongs to an ancient and powerful empire. 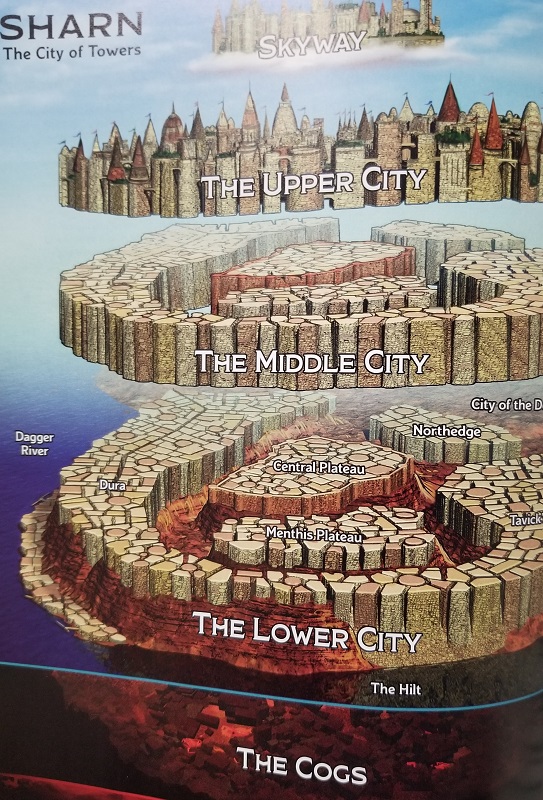 Of course many of you will want to try the new 13th base class, the Artificer. Which features here in a heavily revised version from the recent Unearthed Arcana features. A few notable changes include the removal of the Archivist subclass, the switch of the Alchemist subclass’s core feature from Homunculus (which is now a special benefit any Artificer can pick) to an experimental infusion that can bestow magical effects on your party instead. There have also been a few changes to the way their infusion works–but essentially you can think of an Artificer as somewhere between performing like a cleric and a warlock with the amount of customization options you can do.

It’s certainly not as powerful as earlier versions of this, but I don’t think the Artificer is particularly underpowered. Nor is it as broken as some folks might fear–while the Artificer can be potent, it isn’t necessarily unbalanced. Like most of these things, maintaining the balance requires a deft hand behind the DM Screen. Speaking of which, let’s talk about how much Eberron has to offer prospective DMs.

This book is a DM’s Masterclass in adventure building. From the Group Patron feature, which is one way you can build the party that seems to encourage roleplay and narrative interconnectivity as players create their group as members of a newspaper, or a crime syndicate, or something. You’ll find guidelines for building a group and giving them a patron that can dole out assignments and might on occasion bring them into conflict with rival groups.

But then you’ll find a ton of detail on actually running the game in Eberron. And here is where I feel the book is at its best. Eberron presents such a distinctive style, and opens up the potential for a very particular kind of gameplay, that it can be difficult to figure out how to do it. Not so with this campaign setting. Flip to Chapter Four, which is all about building an adventure, and you’ll find rules for exploring different iconic Eberron environments (including a map that is a fallen warforged colossus) and tips for making sure that your campaign is playing to the themes you want.

You’ll find suggestions on how to improve your villains, or how to run specific kinds of villains like the Mysterious Villain or a villain that the players have a more personal connection to. But most importantly you’ll find some suggestions for keeping your villains alive–and that’s the crux of what makes this book pop. It knows what it is. It knows what you do and how your players play. And then it says “here’s how to change that.” Want to focus more on running swashbuckling, cinematic action including rooftop chases and having tightly paced adventures–Eberron: Rising from the Last War has you covered. Want to let interwoven plots and schemes snare players and draw them into a web of intrigue for no one to escape from? Just check out the Intrigue section in Chapter 4 for some pointers.

And it’s worth pointing out, not all of the things included in this section are villains. You will still find them, villains are plentiful in Eberron, but you’ll find foils and rivals and other ways to have an antagonist that isn’t immediately relegated to kill on sight or the like. It helps you put together adventures that are fun to play through and fun to watch. But we won’t linger on that. Instead check out some of the maps: 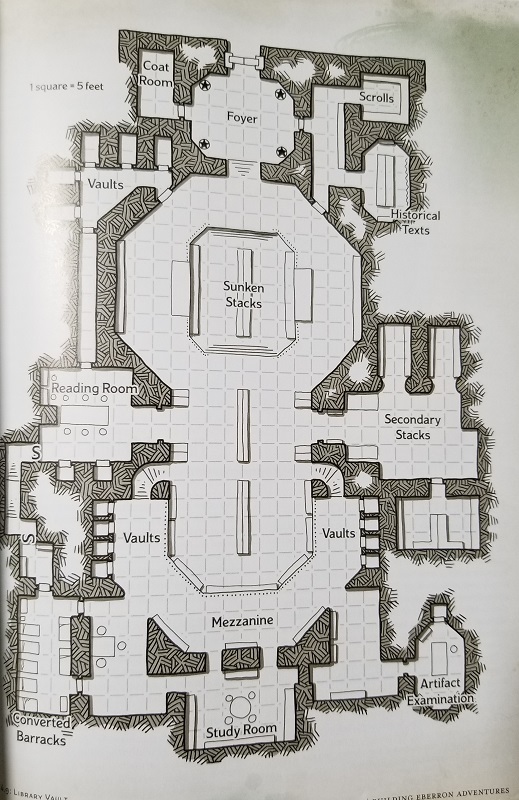 Eberron has everything you need to start running the game right away. You’ll find a ton of new events and tables to help flesh out your world. And you’ll find a lot of little flourishes and embellishments–just look at that magical, illusory Blade Runner style billboard up there–that help round out the feeling of the game.

Eberron: Rising from the Last War is everything you could hope for in an RPG setting book. From the map full of interesting places, to the new options that help players create characters in the game, to the incredible advice on how to run this particular world. If you want to expand your repertoire, Eberron is great. Even if you’re not running a game in Eberron, the rules for adventure building are still golden. The magic items can translate pretty handily to any campaign. There’s a lot to love about this book, and we heartily recommend it.