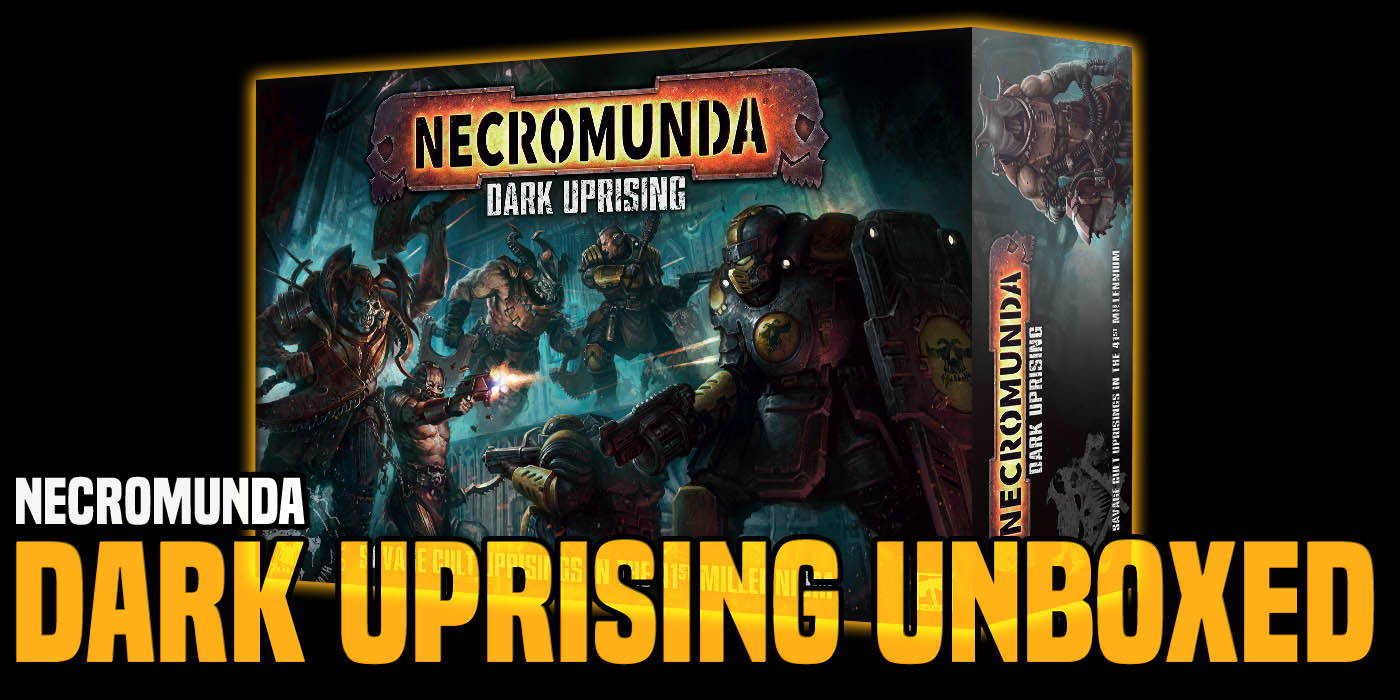 Necromunda Dark Uprising is up for Pre-Order this weekend and we’re taking a closer look at the contents inside the box!

I new going into this boxed set that the Terrain inside was going to be bonkers – but now having seen the sprues up close I can confirm that this set is indeed crazy:

Zone Mortalis – Back In Plastic

This box is 6″ deep and is packed full of plastic. The majority of that plastic is indeed terrain. 17 sprues to be exact, 15 of which are the new Zone Mortalis set. It’s a LOT. If you’re looking to splurge on some really fancy terrain this box is for you. I’d also recommend picking up a set of the Zone Mortalis Tiles to match. But that’s another unboxing. 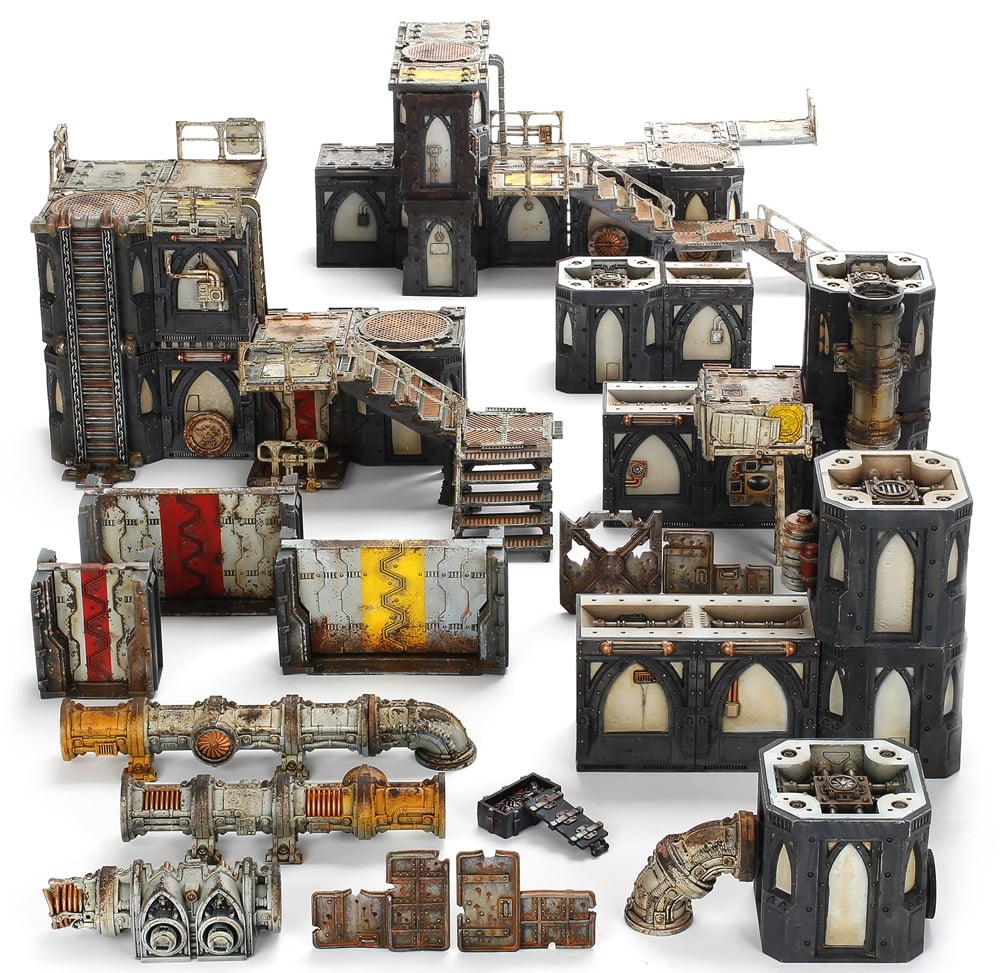 While it’s tempting to go on and on about the crazy amount of terrain in here, we already did that so I hope you would get the point by now. So let’s talk about some of the other goodies in the box!

The Enforcers/Subjugators are one of the gangs inside the box. You actually get 2 sprues for the Subjugators and 1 sprue for the Enforcers. This kind of explains how you can end up with 11 models – I wasn’t quite sure how that spread worked out as GW typically packs 2 duplicate sprues for a gang. But with 3 sprues that model count makes more sense. 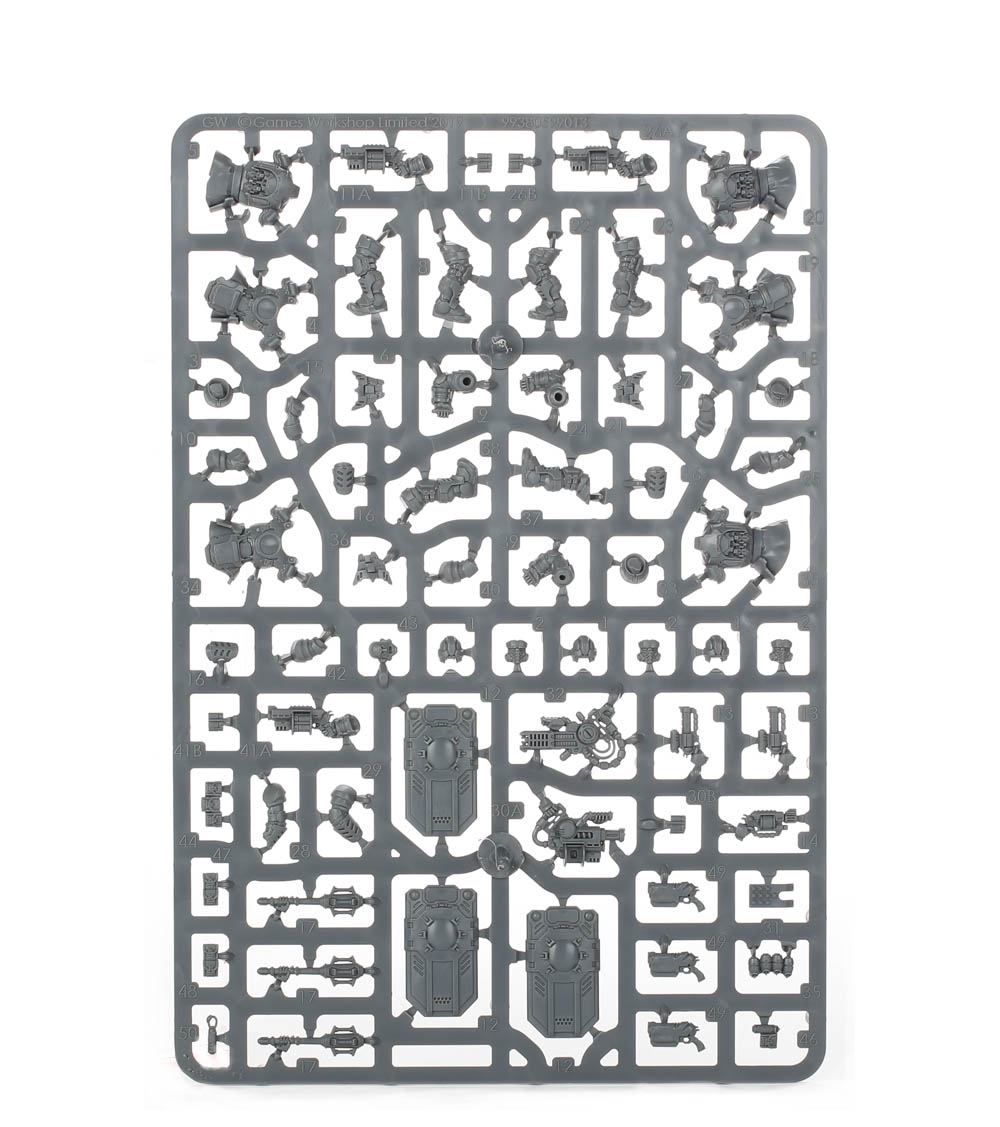 The Subjugators are the new part of the gang. These heavily armored enforcers carry shields, stun batons, and/or Grenade Launchers. As you can see above it’s a very densely packed sprue. You’ll have all the options you need to outfit your subjugators however you want them to be.

The Corpse Grinder Cult is another really densely packed sprue. These guys are creepy looking and certainly give off that Grimdark vibe. If there was going to be a horror movie set in the Grimdark universe of 40k, I think these guys should totally be the antagonist. They aren’t necessarily chaos-evil either. Perhaps that’s one reason I personally find them so disturbing – they are just a little too into what they do. Like Leatherface from the Texas Chainsaw Massacre. 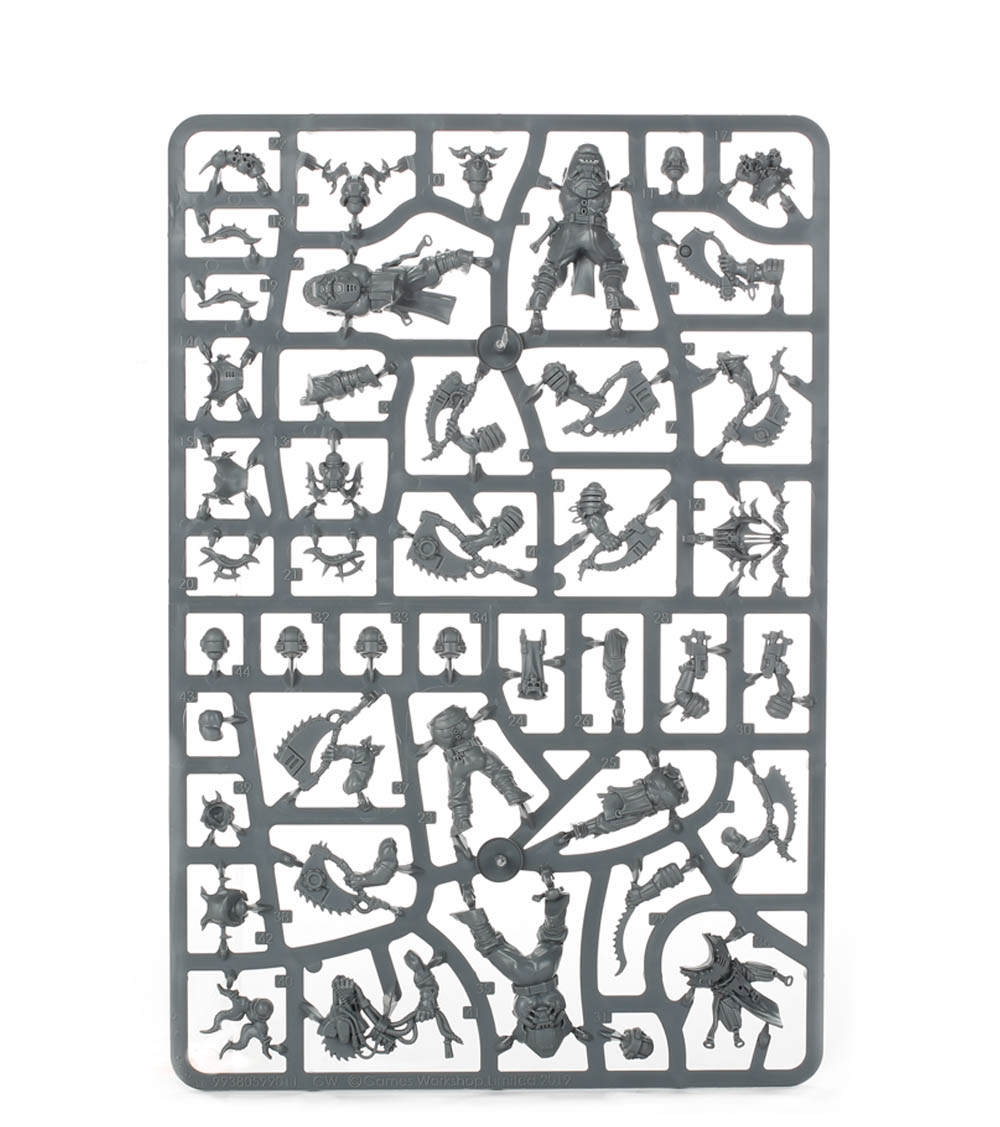 Creep-factor aside, the models are super densely packed with details. It’s really impressive to see all the little things that are on these models. Sometimes those details can get lost in the mix because there is almost too much going on. Between all the saw blades, random straps, butchers aprons, and terrifying headgear, the Corpse Grinders are really unique. 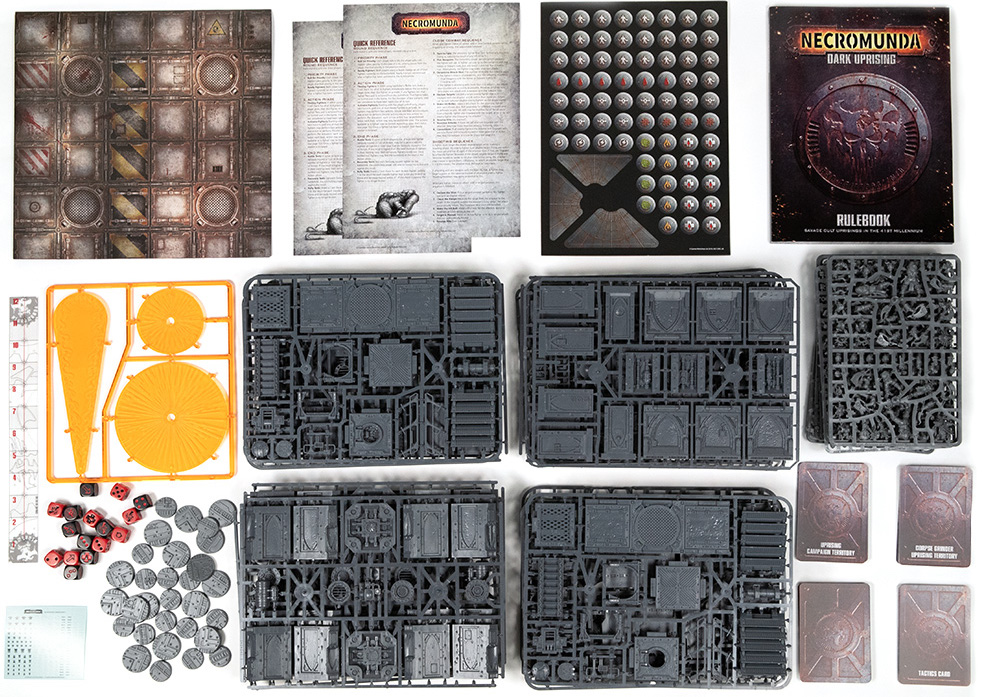 Aside from the Sprues, you also get, well, everything else! Tokens, templates, a rulebook, cards, quick reference sheets, and even a playmat. I will say that the playmat is strange. The texture on it made me think it was some type of plastic or vinyl. It’s not. More specifically, the texture might be, but it’s still paper underneath. It will tear if you attempt to tear it. That’s one of the reasons I recommend the Zone Mortalis Tiles. 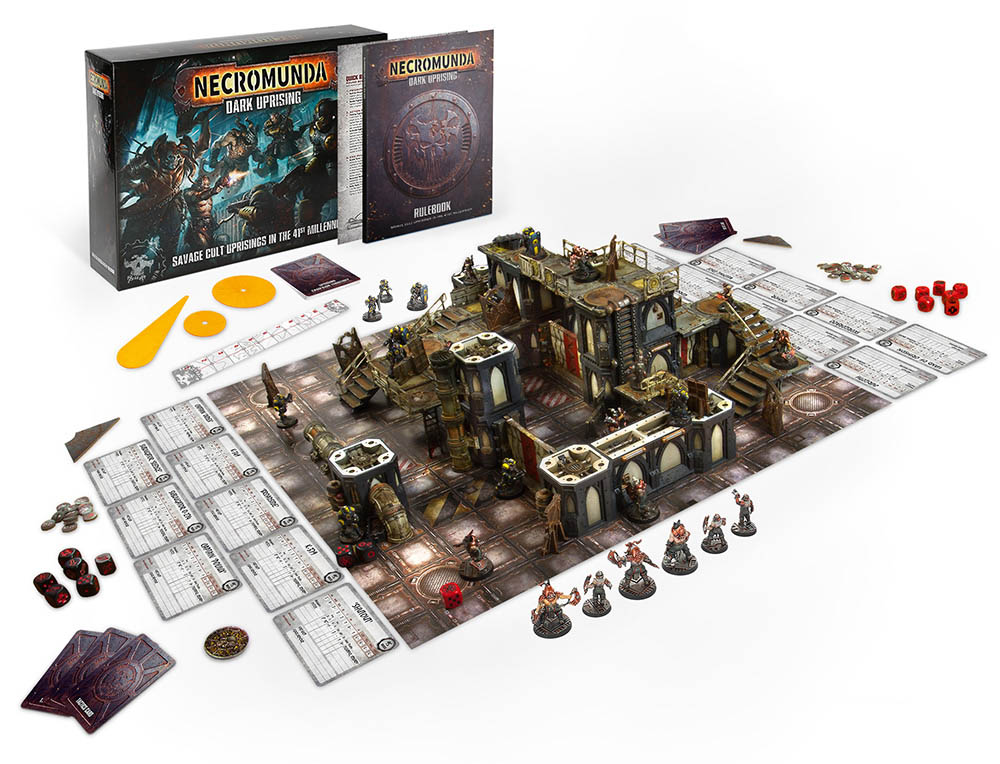 Much like the gang sprues, this is one dense box of stuff. While the price point is going to be off-putting for some, I’m also wondering what the MSRP of the terrain kits alone would be. While this boxed set might not be for everyone, I think Necromunda fans are going to really get a kick out of this terrain and it will probably be a deal in the end. We’ll have to wait and see if GW does end up releasing the Zone Mortalis Plastic Kits as their own, separate releases.

Necromunda Dark Uprising is a great starting kit for anyone who is interested in Necromunda and that terrain is some of the best around for playing games with. If you’re into Necromunda, Kill Team, or even standard 40k games you’re certainly going to get some mileage out of the Zone Mortalis Terrain inside this box.

Author: Adam Harrison
Writer, Editor, Texas Native, and Austinite for 15+ years, Adam covers all things Tabletop Gaming. Which includes Warhammer 40,000, Age of Sigmar, D&D, Board Games and everything else that involves dice, boards, cards and a table. A hobbyist, player, and collector of miniatures and games, Adam's current obsession are his Death Armies for Age of Sigmar, his Blood Angels and Tyranids for 40k, and his ever growing Arkham Horror: The Card Game Collection.
Advertisement
Games Workshop Miniatures Necromunda Terrain Warhammer 40k
Advertisement