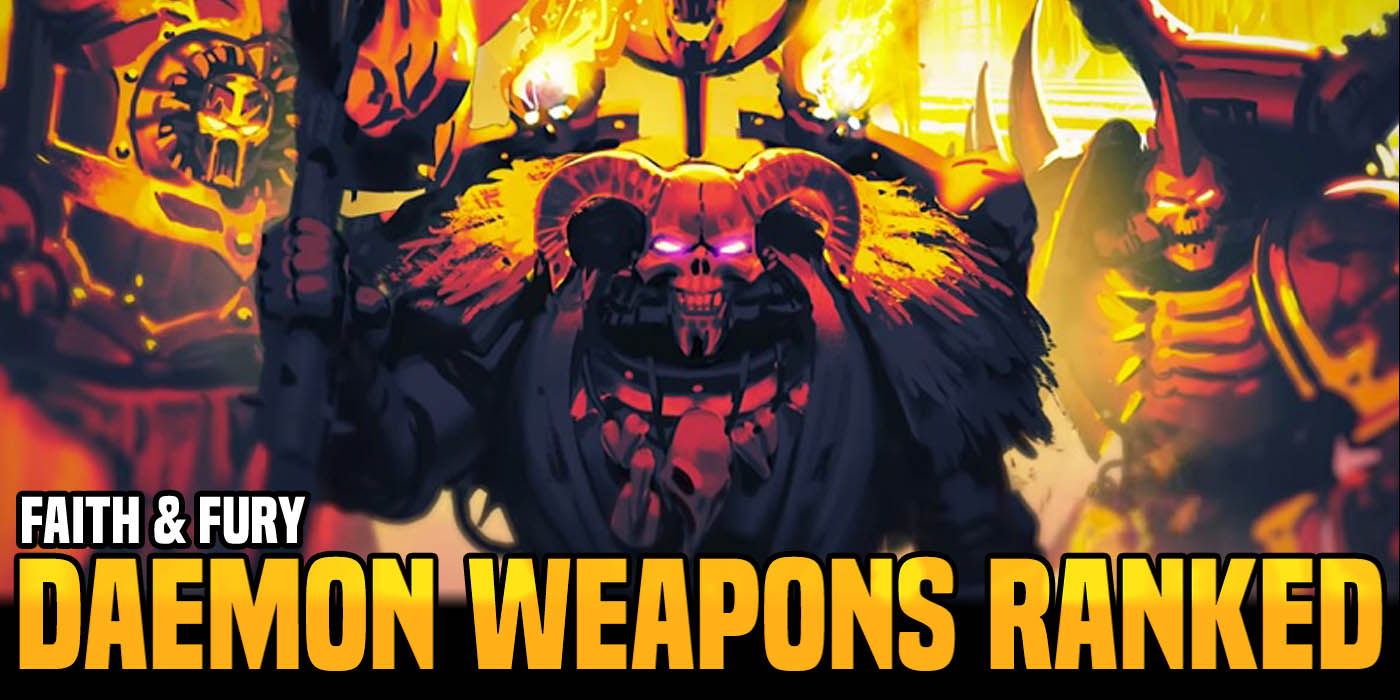 Hot Stuff or Hot Garbage? Let’s take a look at the new Chaos Daemon Weapons and see how they stack-up!

Chaos Space Marines got some new toys in Faith & Fury. Lots of new relics, warlord traits, stratagems, tactical objectives and even name generators! I know most folks who follow the meta really only care about 3 of those things. But there is one batch of things that might get overlooked with all the cool, new legion specific stuff to look at: Daemon Weapons!

These have been re-introduced for the Chaos Space Marines and some of them are surely going to show-up on the tabletop. While others…not so much. There are 5 of them total – one for each chaos god and a generic, undivided option. Today, we’re going to rank all of them them from zero to hero. Let’s dive in! 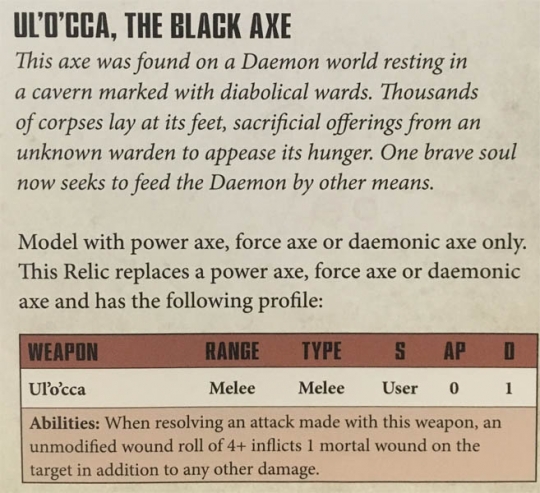 Oh man. This one is bad on many levels. For starters, you’re replacing a power axe, force axe or daemonic axe. What’s the AP on those? I bet it’s better than ZERO. What about the strength boost? Also better than ZERO? Hmm. Alright, so what’s the “benefit” here? Unmodifed to-wound rolls of 4+ cause 1 mortal wound in addition to other damage? That sounds good, until you’re other damage is basically ZERO cause the target is getting it’s save. There are MUCH better options to spend your valuable relic spots on. 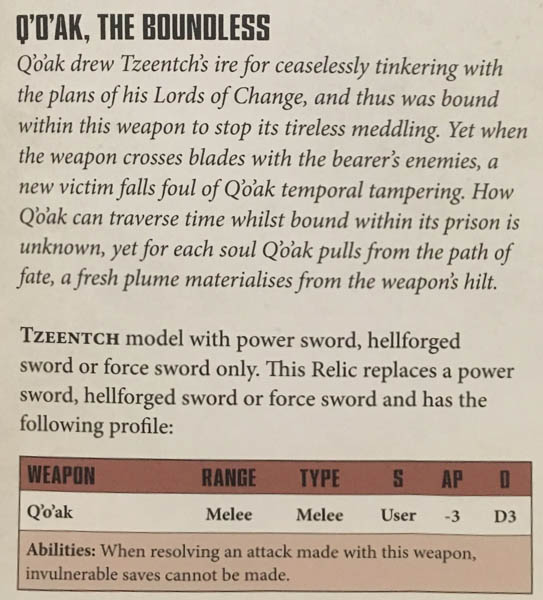 This one isn’t *that* bad. And if you’re running Tzeentch, you might want to consider this. It’s AP -3 and does D3 damage, which ain’t too shabby! On the down side you don’t get any strength boost. Bummer. However, if you do manage to hit and wound, the target cannot use Invulnerable saves! That could be randomly good. We’d rank this one even higher if the damage was a flat 2 or 3, but it’s not. 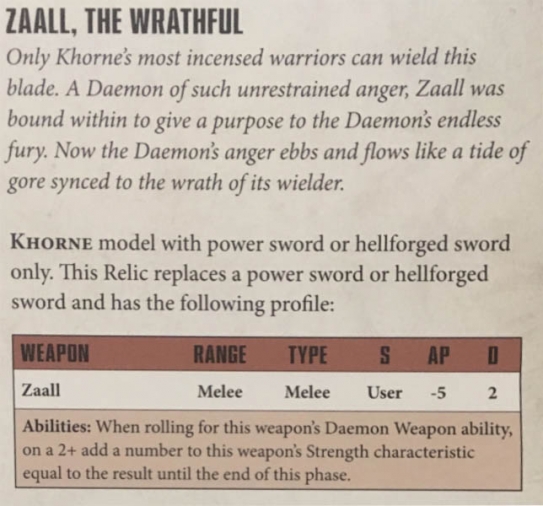 The Khornate Daemon Weapon is starting to get into “mean” territory. It actually interacts with the Daemon Weapon roll, too – which we liked. Having a Chaos Lord, Champ, or Daemon Prince with a crazy +6 strength attack seems nice. It’s also a crazy high AP -5, so it’s basically going to be invulnerables or bust. It’s also a flat 2 damage which we liked. We’d have liked it even more if the damage was 3…but it’s a solid option none-the-less, especially if you want to go vehicle hunting. 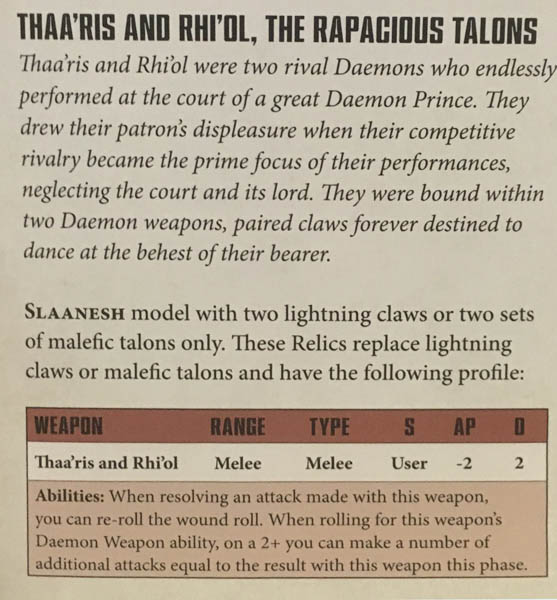 These bad-boys have some crazy damage potential thanks to the way they interact with the Daemon Weapon Rule. Getting an extra +2-6 attacks could be down right scary! 50% of the time, they are going to be better than your Daemon Prince’s Malefic Talons. Sure, 16% of the time, you’re going to hit yourself…but that’s the risk your taking! These are just flat out better than standard lightning claws for your Chaos Lords as well. More attacks is more win! 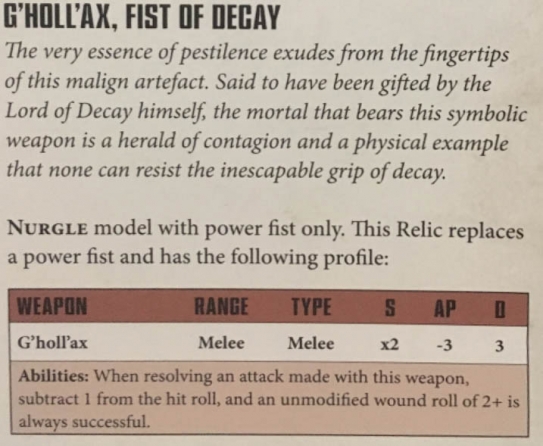 Look, this one is very simple. It’s a Powerfist that wounds on a +2. That’s just…GREAT! Sure, it’s still -1 to hit, but it’s also a flat 3 damage. I’m sure chaos players will find a way to make this nurgle daemon weapon take out a knight in a round!

Well, that’s our rankings – which weapon is your favorite? Let us know in the comments!