The Lord of the Rings has a new batch of Miniatures available. Dunland’s Heroes, Ringbearers, and legendary hobbits are up for pre-order! 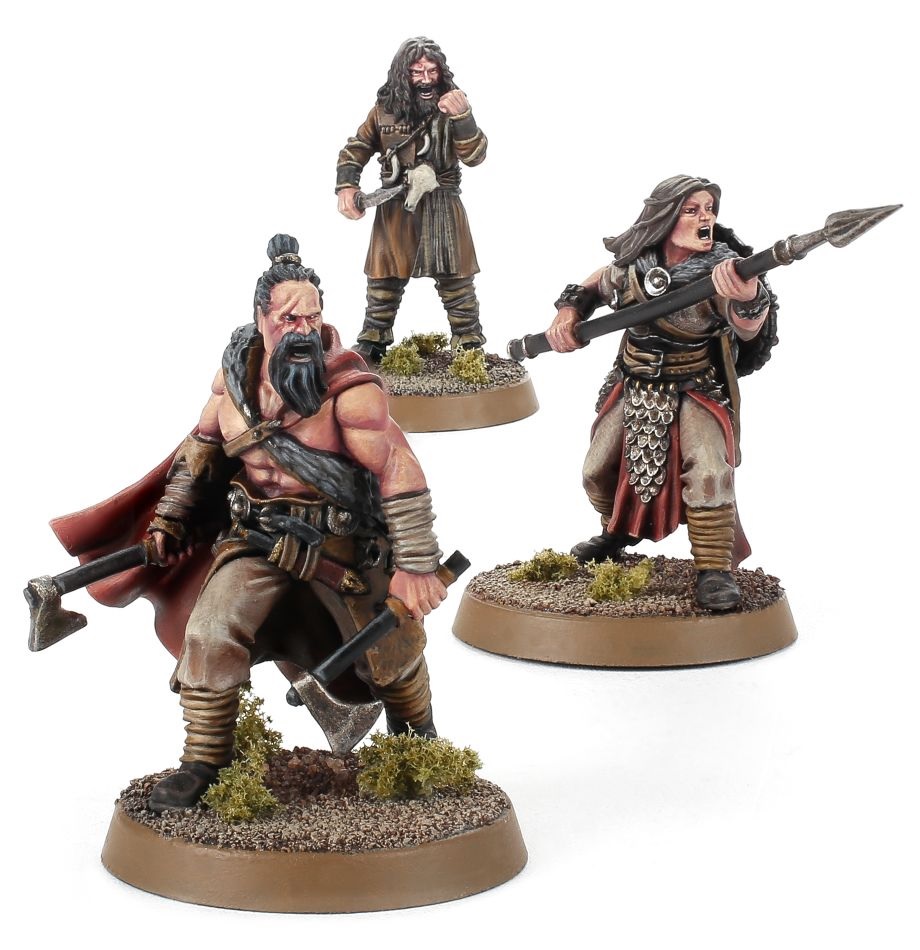 Gorûlf is a chieftain who serves under the rule of the war chief of Dunland. Since he has no royal blood within his veins, Gorûlf has had many challengers to his rule over the settlement he commands – each one Gorûlf has faced has met a bloody and unpleasant end for their insolence, and never once has he suffered more than a mere scratch as he defends his lands. It is because of this that Gorûlf has earned the name Ironskin and the favour of Thrydan himself.

Formally a wife to a Dunlending chief, Frída Tallspear has since risen to command her own tribe. During a skirmish with Rohirrim over land, the chief was slain and the battle seemed lost, yet here Frída showed her true nature. Overcome with rage, and grabbing a spear from the dirt, Frída stood defiant against the oncoming cavalry. As the Rohan Captain galloped forth, Frída thrust her spear into his mount, bringing down both horse and man in one fell swoop. Such an act of fearlessness and brutality saw her claim command, earning her the name she now bears.

Having been driven from the lands that they believe to be their own by the Rohirrim, it didn’t take much for Saruman to bend the Dunlendings to his will, promising them vengeance upon the Forgoil they harboured a deep hatred for. A Wild Man Chieftain swore the allegiance of his people to Saruman in blood, becoming known by the tribes of Wild Men as the Oathmaker. Those Wild Men that followed the Oathmaker into battle did so with unbridled fury and a fearless rage.

The set contains three resin miniatures, each supplied with a Citadel 25mm Round Base. Their rules can be found in War in Rohan. 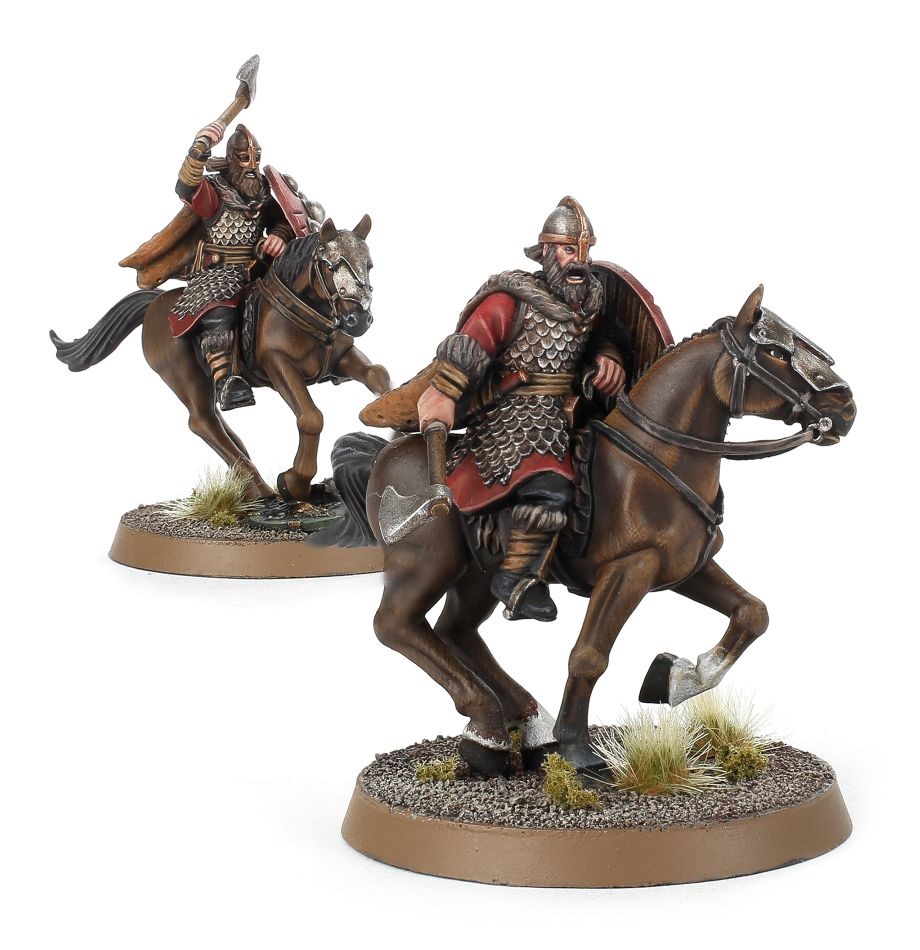 Though they may not possess the riding skill of the hated Rohirrim, the horsemen of Dunland can still form a mighty charge against their enemies. What the Dunlending horsemen may lack in skill from horseback, they more than make up for in pure brute strength. The force of the Dunlending charge can splinter even the most well-formed shield walls as they use momentum from their horses to propel their axes blades through both wood and metal.

Armed with an axe and shield, Dunlending Horsemen are the bold and hard-hitting cavalry of Thrydan Wolfsbane. If you seek to reclaim your ancestral lands from the usurpers of Rohan, look no further than these hard-hitting riders.

The set contains two resin miniatures, each supplied with a Citadel 40mm Round Base. Their rules can be found in War in Rohan. 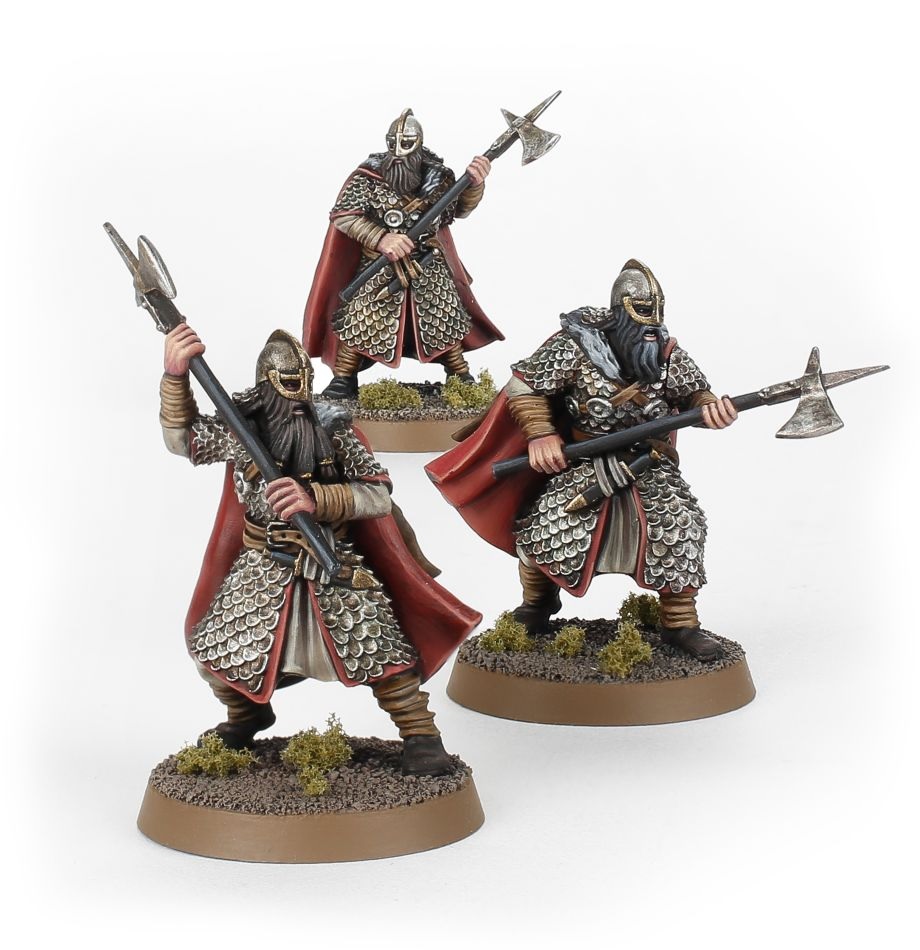 Elite warriors who are handpicked by the war chief of Dunland to protect himself and his favoured chieftains, the Huscarls are among the greatest warriors of the Dunlending people. Each Huscarl dons scaled armour and wears the pelts of their most impressive kills, designed to show the strength upon the battlefield. Armed with great war axes, the Huscarls’ aim on the battlefield is to protect the chieftains from the Forgoil or any others who threaten them.

As the strongest and most capable warriors of Dunland, Huscarls are at their best when accompanying their Heroes into the fray. They make for a solid core of your most reliable Dunlending infantry.

The set contains three resin miniatures, each supplied with a Citadel 25mm Round Base. Their rules can be found in War in Rohan. 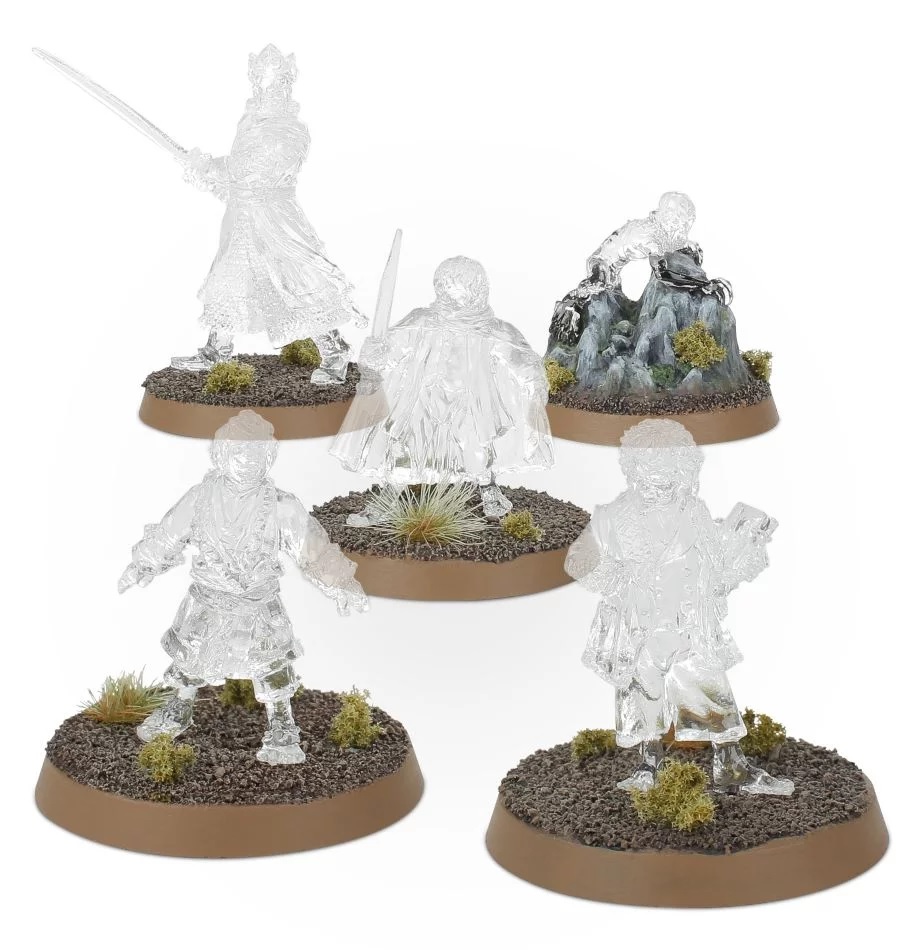 After Isildur severed Sauron’s finger to wrest the One Ring from the Dark Lord’s grasp, there have been four denizens of Middle-earth who wore the One Ring in battle – Isildur himself, Gollum, Bilbo Baggins and Frodo Baggins. Of course, to don the One Ring is to vanish from the sight of mortals, and this set of clear resin miniatures enables you to represent this quirk in the game! To that end, each miniature is an exact replica of their normal model, meaning all you need to do to represent the Hero putting on the One Ring is to swap them over on the battlefield.

This set includes the following miniatures, cast in clear resin and each supplied with a Citadel 25mm Round Base:

Their rules can be found in Armies of The Lord of The Rings™.

These models are only available for a limited time – so get them before they vanish! 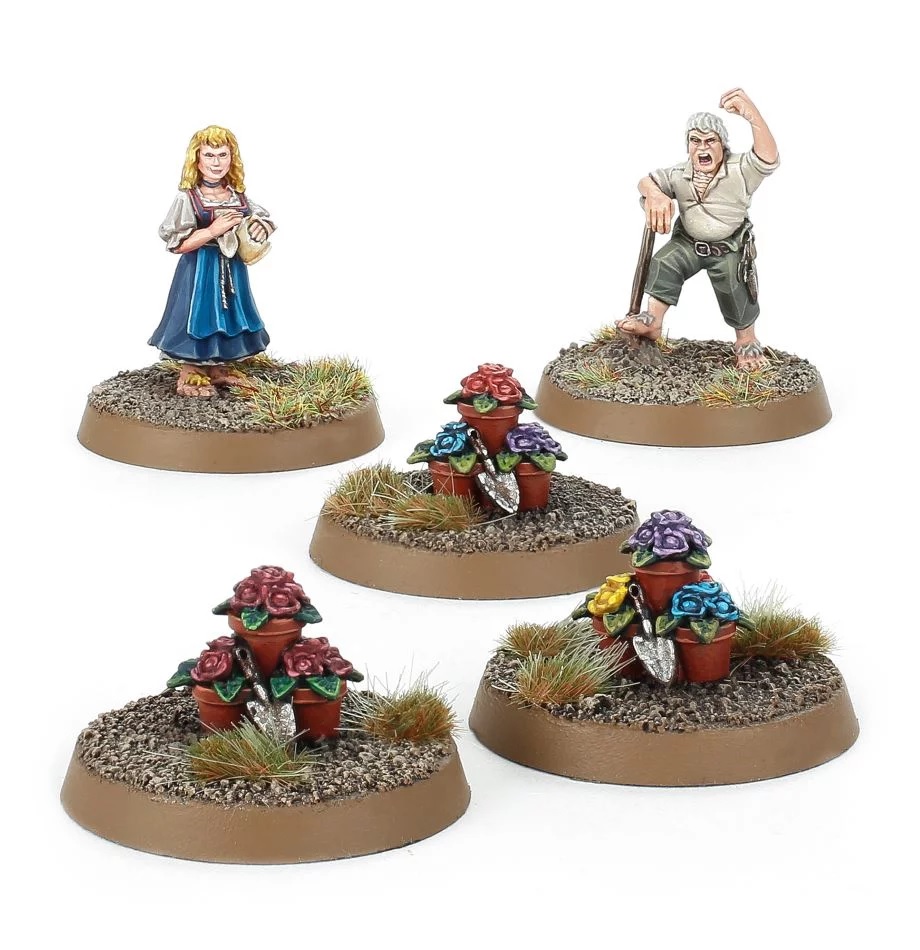 Before the Ruffians invaded the borders of the Shire, Rosie Cotton had been the barmaid at the Green Dragon pub in the heart of Hobbiton, and it was here that she caught the eye of the young Samwise Gamgee. Following Sam’s return to the Shire as a hero, Rosie was delighted to hear of his safe return. Even with all manner of Evil things going on, Sam was concerned for Rosie’s safety and would fight to make sure she was not harmed.

The father of Samwise, Hamfast Gamgee is a well-respected Hobbit who has lived in Hobbiton for many years, and his wise and knowledgeable persona has earned him the nickname of Gaffer. Much like his son, Hamfast is a keen gardener and has spent countless hours tending to the flowers and trees that grow around his home. When the Ruffians came to the Shire and uprooted the Gaffer’s garden in Bagshot Row, Hamfast rallied together those Hobbits who shared his passion for things that grow to take the fight to Sharkey’s Rogues.

This highly detailed multipart resin kit builds one Rosie Cotton and one Hamfast Gamgee, each supplied with a Citadel 25mm Round Base. Rules for using these models in games can be found in the Scouring of the Shire supplement.