Warhammer 40K: What Happened to Morale? 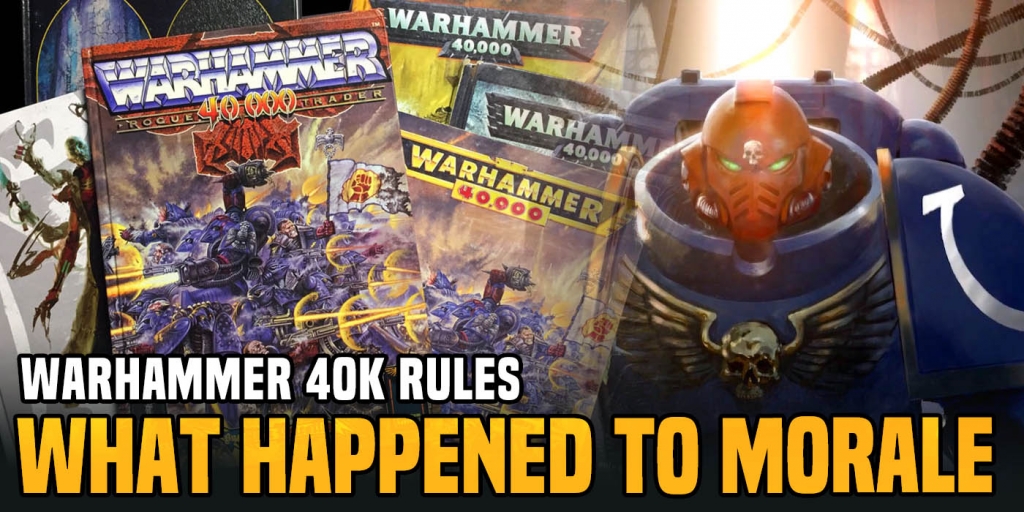 Morale and Leadership has had a ever shrinking role in Warhammer 40,000. What’s going on?

Morale has waxed and waned over the 30 year history of 40K. It started off simply in Rogue Trader, reached is apogee in 4th edition and has been in decline ever since. Let’s start with a quick look at Morale over all 8 editions of the game then stop to ask what’s going on. 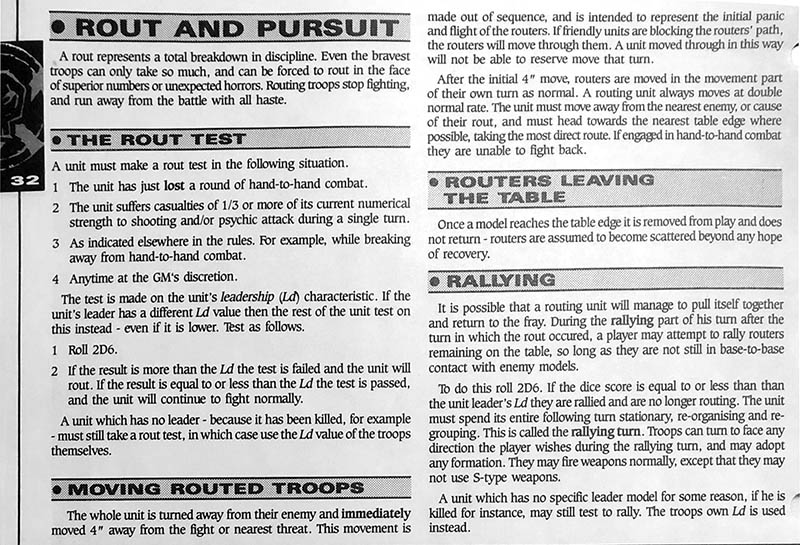 These very early rules were titled Rout & Pursuit. They covered only the barest of rules for routing after failing your Leadership checks and how to Rally your units. 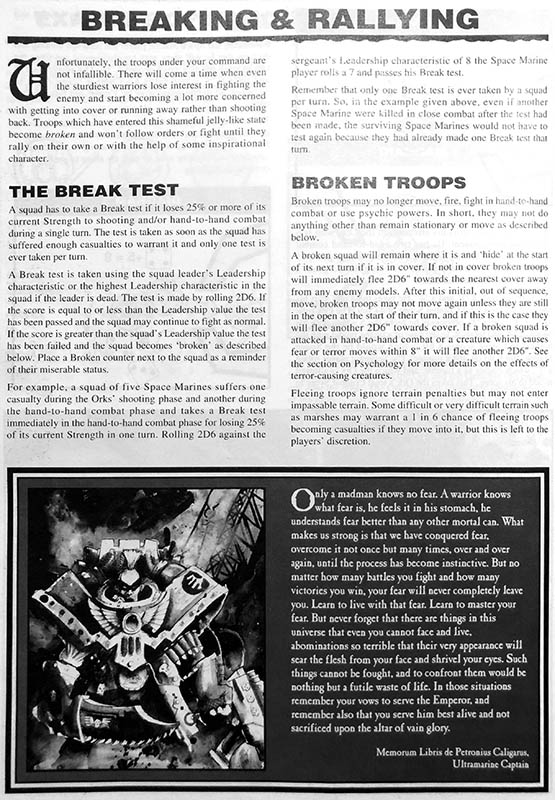 Now named Breaking and Rallying, the rules got an overhaul into something familiar. The rules covered Break Tests, Broken Troops, Rallying and for flavor, Insane Bravery & Craven Cowardice mechanics. 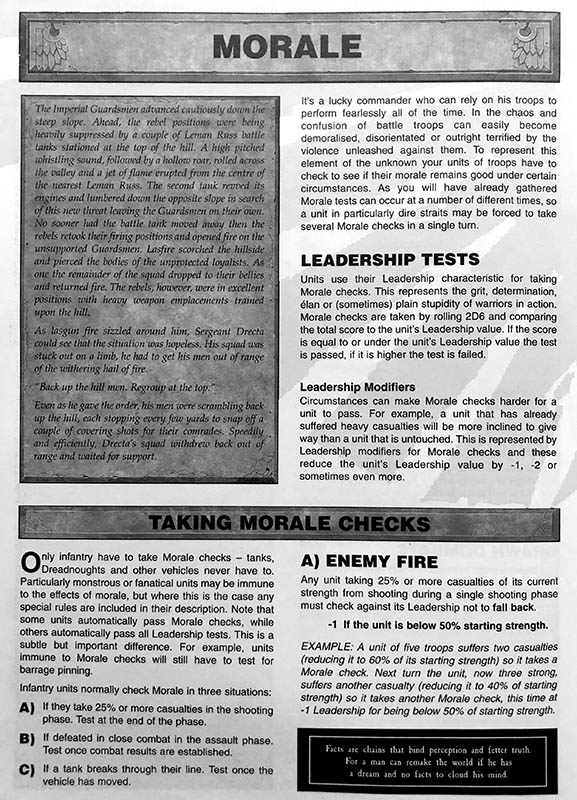 The Morale phase arrived! It heralded the modern age of Morale that would last for many editions. It included: Morale Checks, Falling Back, Tank Shock, Regrouping, and for flavor, the Crossfire and Last Chance rules. 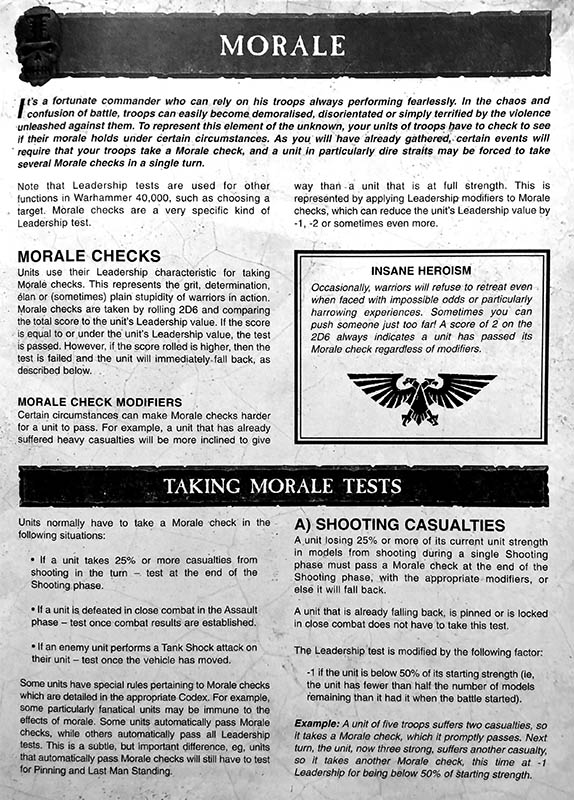 The Morale phase expanded to it’s most complex. It included: Morale Checks, Falling Back, Tank Shock, Regrouping, and for flavor, the Insane Heroism and Last Man Standing rules. 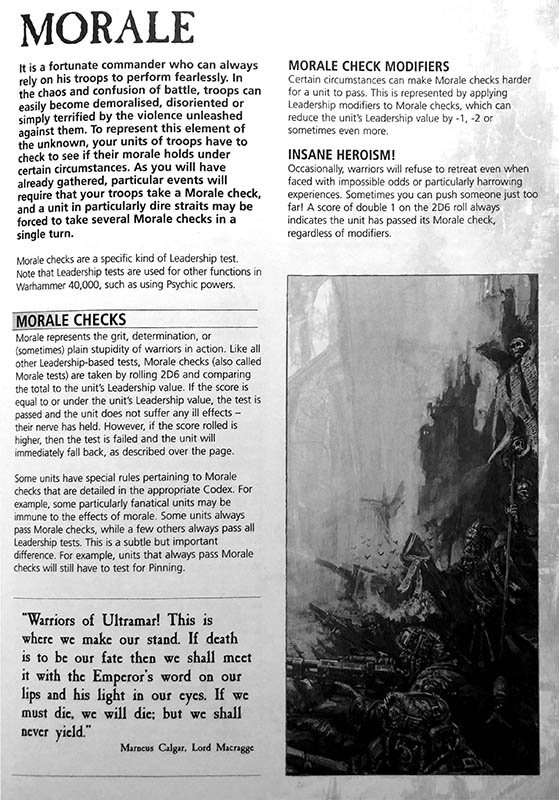 The slimming began, and some “fiddly rules” were removed. The phase included Morale Checks, Falling Back, Tank Shock, Regrouping, and for flavor, the Insane Heroism rule. 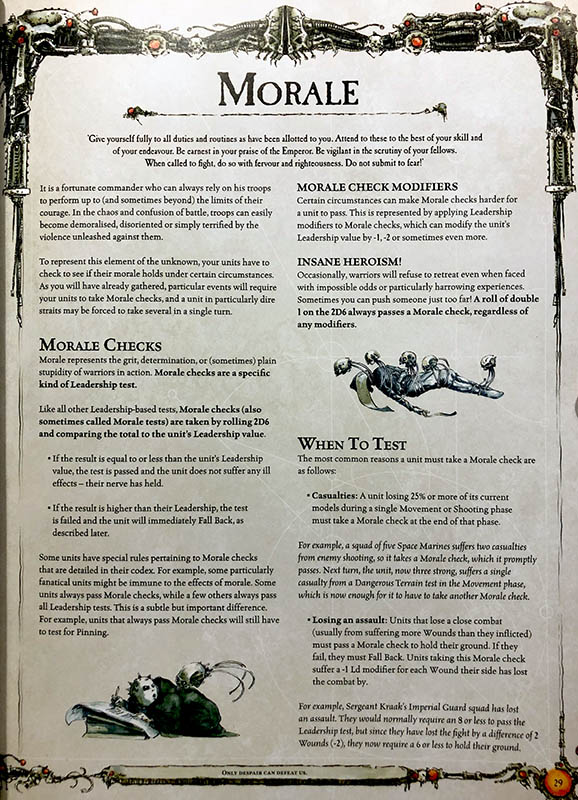 The Morale phase stabilized, and included Morale Checks, Falling Back, Tank Shock, Regrouping, and for flavor, the Insane Heroism rule as in 5th. 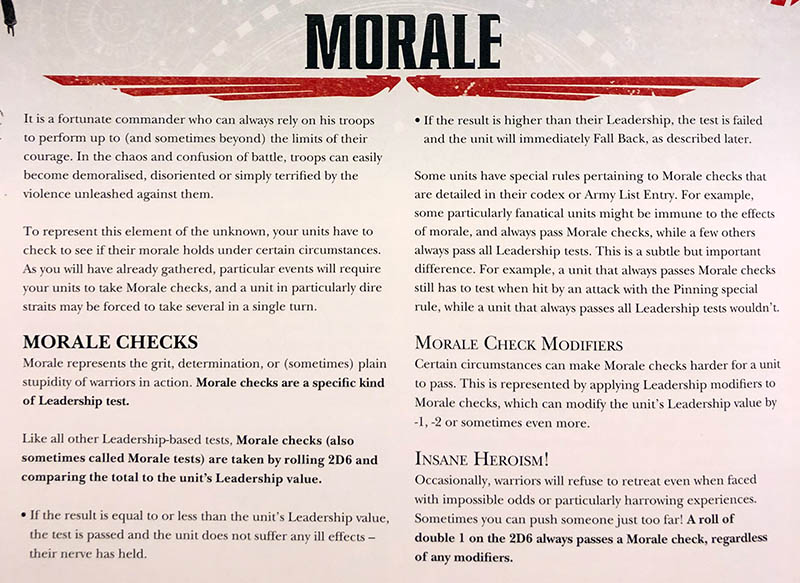 The Morale phase was relatively unchanged stabilized, and included Morale Checks, Falling Back, Tank Shock, Regrouping, and for flavor, the Insane Heroism rule as in 5th-6th. 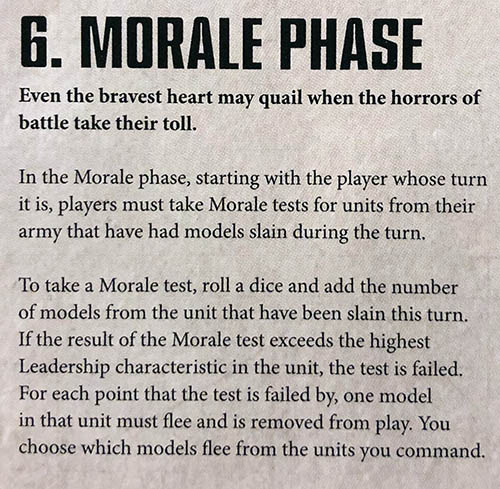 The Great Reboot. The entire game’s core rules got reduced to 8 pages and Morale became a single paragraph (seen above).  It is now a system based on the old Daemonic Instability rules from Warhammer Fantasy. Units simply lose models and all other falling back and regrouping mechanics are gone. Morale rules have never been so small in the history of the game.

It would appear that the big picture trend is twofold.

Less Complexity – The rules themselves are getting ever smaller. In edition after edition we see the “fiddly bits” like Last Man Standing, or Insane Bravery being dropped. Then the transition from 7th to 8th saw the huge drop-off of almost every rule – reducing Morale to the old Daemonic Instability rules from Warhammer Fantasy.

Eliminating Loss of Control – I think this is actually the bigger trend and we see it in both 40K and Age of Sigmar. The latest Morale rules completely eliminate the ability of your models to be “out of control”. by that I mean states such as falling back, broken, or whatever. Failing Morale can indeed kill models, or even whole units if you are extremely unlucky, but your models who failed Morale are never moving under a set of game rules not of your liking – the type of fleeing movement that has been a staple of wargaming for decades.

It is system that makes the game more regular and predictable. Sure you may end up with less models than you expected, but you no longer see those wildly unexpected situations where multiple units flee unexpectedly, and end up in unseen positions, gumming up sections of tabletop while both players struggle to react. Something that has very real world origins and is how many, many real world battles have ended.

It may be that GW did a lot of research and found out that players hated out of control movement, and found it not-fun. But for whatever reason, it is gone from both of their games after over 30 years of being in there. My question is do you think they made the right decision?

~So what do you think about Morale. Should it be eliminated altogether from the game, or have its complexity start to return?

Warhammer 40K: Wrath And Glory Sets The Stage For The Gilead System