Critical Role and D&D are teaming up officially for the newest book on the roster. Confirming the details that leaked out yesterday, WotC has made their official announcement about their newest title: Explorer’s Guide to Wildemount. This is a pretty big move by WotC, embracing the setting of one of the biggest actual-play streams out there right now. This book is tied pretty heavily to their 2nd Campaign, but is poised to deliver enough new information to appeal to folks looking to explore any new setting, including new spells, new subclasses, and a new way of building backgrounds.

Matt Mercer, who helmed the book’s development, left a heartfelt post on Reddit, addressing people’s concern that Wildemount was published in place of, say, a Dark Sun setting book, or a book that featured the new Unearthed Arcana options we’ve seen:

I’ve spent the better part of 1.5 years working on this project, along with some incredible contributors, to make this something we could all be extremely proud of. I set out to create this book not as a tome specifically for fans of Critical Role, but as a love letter to the D&D community as a whole. Those who follow our adventures will find many familiar and enjoyable elements that tie into what they’ve experienced within our campaign. However, I want this book to not only be a vibrant, unique setting for non-critter players and Dungeon Masters young and old, experienced or new, but also a resource of inspiration for DMs to pull from regardless of what setting they are running their game in. I’ve done my very best to make it a dynamic, breathing world full of deep lore, detailed factions and societies, a sprawling gazetteer, heaps of plot hooks, and numerous mechanical options/items/monsters to perhaps introduce into your own sessions, or draw inspiration from to cobble together your own variations. I wanted this to be a book for any D&D player, regardless of their knowledge of (or appreciation of, for that matter) Critical Role. I made this for ALL of you.

I am also well-aware of how much negativity can permeate these spaces regarding myself and the games we play, and that’s ok! One could never expect our form of storytelling and gaming to be everyone’s cup of tea, and it could very well be that this just isn’t the book for you. I don’t begrudge you that, and I only hope one day we get a chance to roll some dice at a convention and swap stories about our love of the game. I know for folks, this isn’t necessarily what they were hoping for the announcement to be, and for that I’m sorry.

As a person excited and clamoring for new settings to be brought into the D&D multiverse, I also understand the frustrations from some that this isn’t one of the “classics”. Believe you me, I’m one of the those who is ever-shouting “I want my Planescape/Dark Sun”, and said so loudly… multiple times while in the WotC offices. Know that my setting doesn’t eliminate, delay, or consume any such plans they may have for any future-such projects! I’m not stepping on such wonderful legacy properties, these same ones that inspired me growing up. This is just the new-kid stepping into that area and hoping one of the older kids will sit and have lunch with them. 😉 If Wizards has any plans to release any of their much-demanded settings, they’ll come whether or not Wildemount showed up.

I also wanted to comment on the occasionally-invoked negative opinions on my homebrew designs I’ve seen here… and they aren’t wrong! I don’t have the lengthy design history and experience that many of you within this community do have. Outside of small, home-game stuff I messed with through the 2000’s, my journey on the path of public homebrew began as a reaction to online community demand and throwing out my inexperienced ideas in a very public space. Much of my early homebrew was myself learning as I went (as all of us begin), only with a large portion of the internet screaming at me for my mistakes and lack of knowledge. Even my Tal’Dorei Guide homebrew was rushed due to demands being made of me, and I continue to learn so many lessons since. The occasional unwarranted intensity aside, there is much appreciated constructive criticism I’ve received over the years (from reddit included) that has helped me grow and improve. Anyway, what I mention all this for is to express my thanks for all the wonderful feedback, the chances to learn from all of you as time has gone on, and the many elements of this book reflect that improvement as I took those lessons and collaborated with the official WotC team to make this as good as it could be.

It’s worth pointing out that we’ll likely see a big subclass-heavy guide later this year, as the last round of subclass testing that led to Xanathar’s Guide took about 6 months to turn around, so look for something big come November on that regard. In the meantime, folks interested in a new setting book can find a lot to love about Wildemount. What exactly? Let’s find out.

via Wizards of the Coast and Critical Role

First let’s take a look at that gorgeous cover. 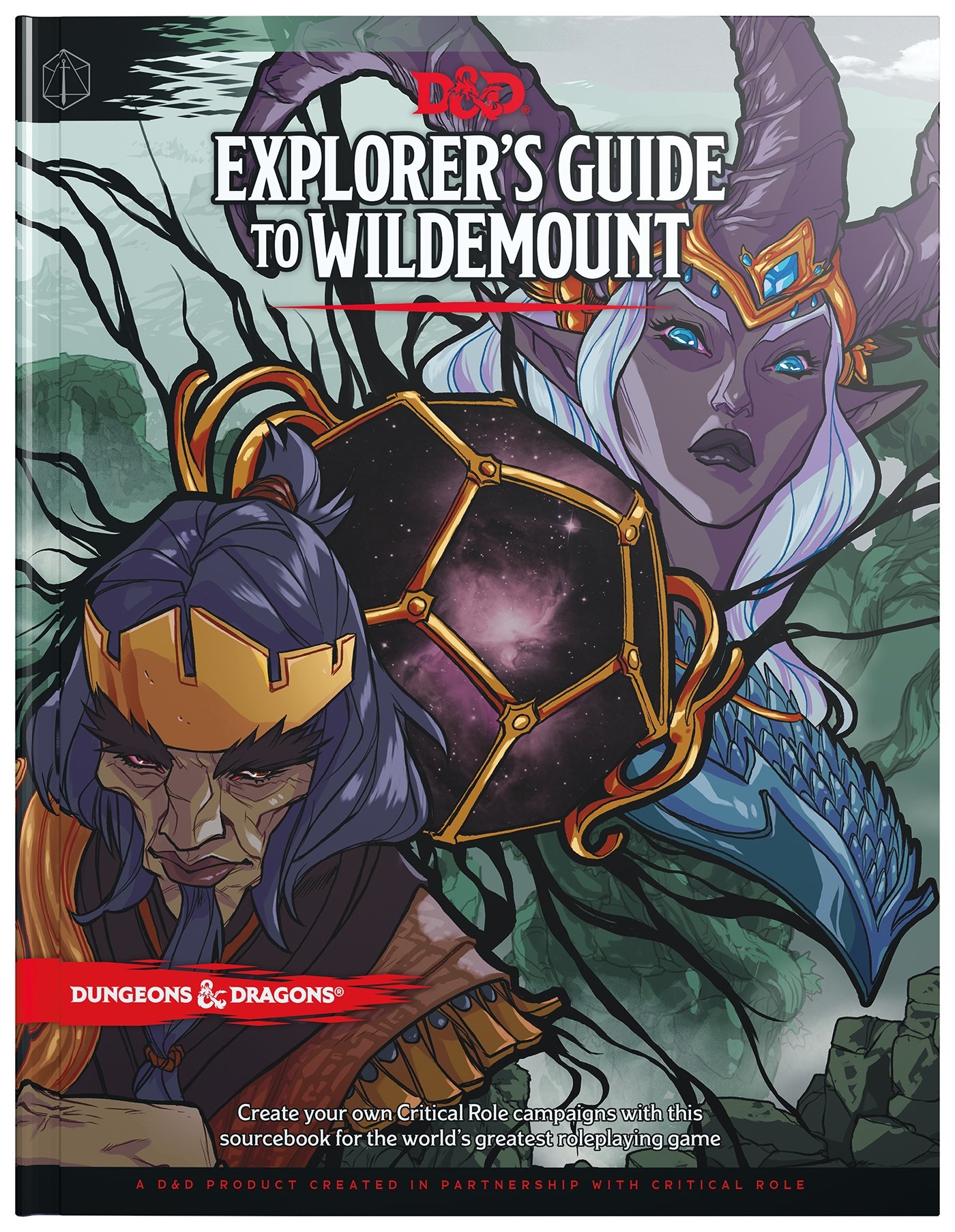 That art style looks a bit different from D&D’s typical art–you can see the massive d12 of destiny that has been an important part of Campaign 2’s story arc, as well as the drow empress of the Kryn Dynasty on the cover. The art style is slightly different because this book features fork by people from both the D&D and Critical Role communities:

Largely written and helmed by Matthew Mercer, the Dungeon Master of Critical Role and creator of the world of Exandria, this 304-page book features work by talented designers, writers, and artists from the D&D and Critical Role communities.

Explorer’s Guide to Wildemount is an expansive, vivid campaign setting anyone can enjoy regardless of their familiarity with Critical Role, and an open invitation to make the mysteries and dangers of Wildemount your own. 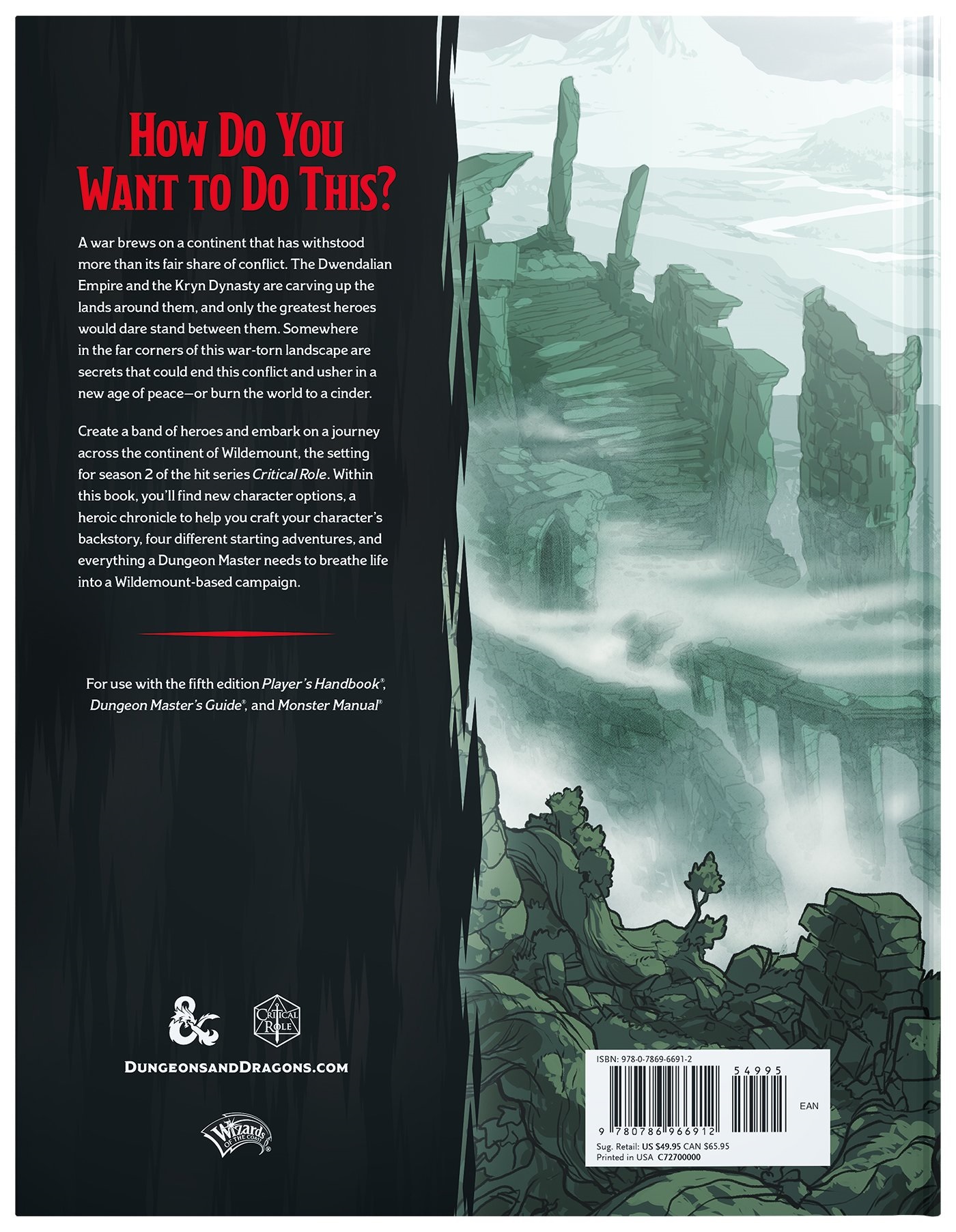 What specific options will people find? Well the usual things you’d expect from a campaign guide.

We’re very interested to see what the new subclasses, spells, and magic items are. It looks like folks wanting to see a return of the ‘legacy weapons’ from 3.5 might get their wish with a system in place to grow your weapon along with your character.

Create your own Critical Role campaigns with this sourcebook for the world’s greatest roleplaying game!

Explorer’s Guide to Wildemount provides everything you need to play Dungeons & Dragons on the continent of Wildemount (set within the world of Exandria)—a land of war, betrayal, and swashbuckling adventure.

Comprised of four regions, Wildemount provides endless potential for adventure in a land of brewing conflict and incredible magic. Rising tensions boil over into all-out war between the politically dubious Dwendalian Empire and the light-worshiping wastefolk of Xhorhas, supplying a vibrant backdrop for any D&D campaign to explore.

The book is up for pre-order now, and releases March 17th.

D&D: Here's A Look At All 20 Special Cards In Laeral Silverhand's Explorer's Kit