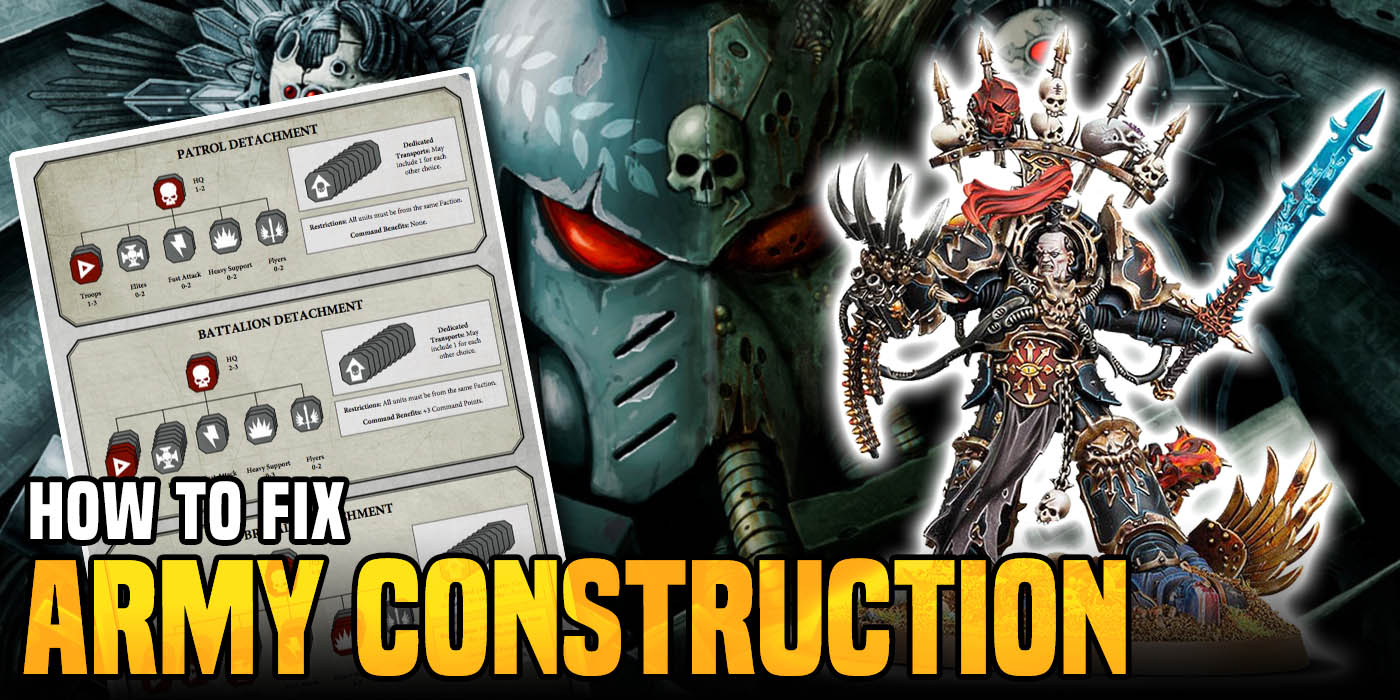 Army construction has evolved into a convoluted mini-game, and it’s time to clean it up.

I remember a time when you opened up a codex, picked a bunch of cool units, added up the costs and played a game.  That was 30 years ago, but hey you have to start somewhere.

As the editions passed by we slowly got more more detailed force org charts to promote “balanced” or “realistic” armies. Then several editions later, we got allies which threw a monkey wrench into everything.

Here at 8th Edition we have 4 pages of  Detachment charts that are frankly being stretched too thin, trying to accomplish too much with a single mechanic. They have to:

I think we can all agree that the system could be improved. We see all kinds of odd army construction behaviors as a side effect of the current system. We have the entire concept of “tax units”, which are undesirable units that players take just to get some larger reward. You have CP min/maxing where entire detachments are taken simply for the CPs handed out like candy. The list goes on.

So today I want to talk about several concepts to modify or alter the Detachment constructs to give us better results.

The Auxiliary concept is a new category to represent units that are tangential to an army, and commonly fielded with them, but not actually a fully integrated or fully trained part of the army. So for example think of unit such as:

How Would It Work

This could be a new unit category that allows the units to be “stuck on” to an existing army or Detachment with restrictions. For example Auxiliaries might not be permitted to exceed the number of TROOPS units in an army or Detachment. GW could use this to create a bucket of the units that currently get spammed because GW has no other good spot to put them, leading to entire armies being based around these units of dubious effectiveness. These types of units are commonly used as vectors for army construction shenanigans. It also gives a home to cool a la carte units that fit the fluff but dont really have a legitimate faction to call their home. Think of that Zoat for example. Auxiliary would be combined with the faction keyword system for further filtering.

This is a concept that several other games use. Certain ultra rare, potent or exotic units may use up more than a single force org slot.

How Would It Work

Some rare or powerful units really straddle multiple roles, or are of such potency that a single slot does not do them justice. For example think of these examples and how they would change up how some armies are constructed:

We could go on and on, but those two open up a lot of possibilities for you to think about. I think a lot of these concepts would pair with a larger amount of Detachment types with more granular CP rewards to make more varied armies possible, and encourage players to take more units they want to take, while better mirroring the grimdark’s background.

~What do you think of the concepts and which do you think have the most merit for future editions of the game?