In case you haven’t heard, Privateer Press recently launched a kickstarter for their new sci-fi miniatures game, Warcaster: Neo-Mechanika. Getting funding within the first 30 minutes, it’s now in the unlock as many stretch goals as possible phase.

Years ago when I was building my first Warmachine army I thought about how cool it would be to make my own warjacks. Choosing my weapons based around a specific strategy and customizing them for a certain Warcaster. Neo-Mechanika is now letting my live out that dream with one of the coolest features of the game – customizable warjacks. 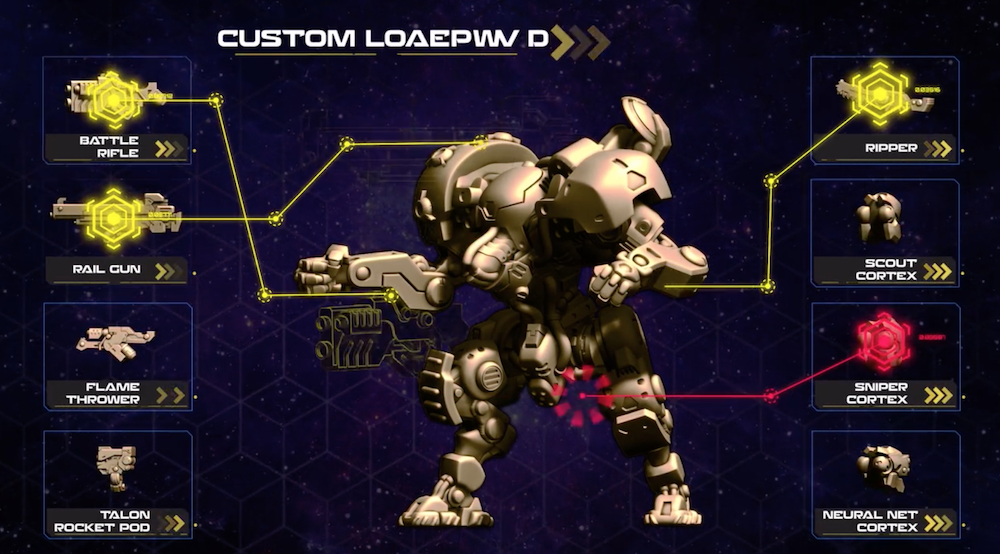 From the cortex to the shoulder-mounted cannon, you get to make the warjack that you want. I’ve got my hands on a Dusk Wolf light warjack and I’m super excited to make it my own.

The Dusk Wolf is full metal and sits on a 50mm base. Warmachine players will recognize this base size as being for a Heavy Warjack, but Neo-Mechanika is bumping up the scale and uses the 50mm for its lights! 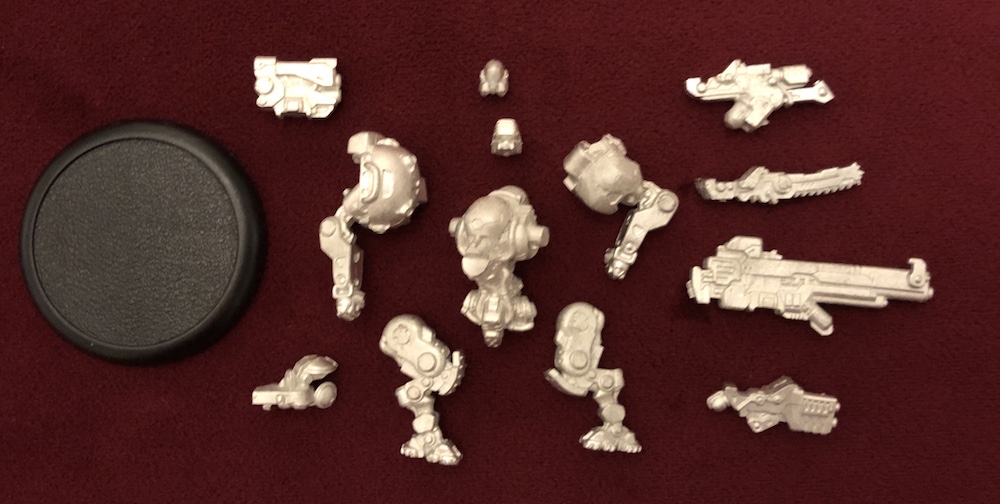 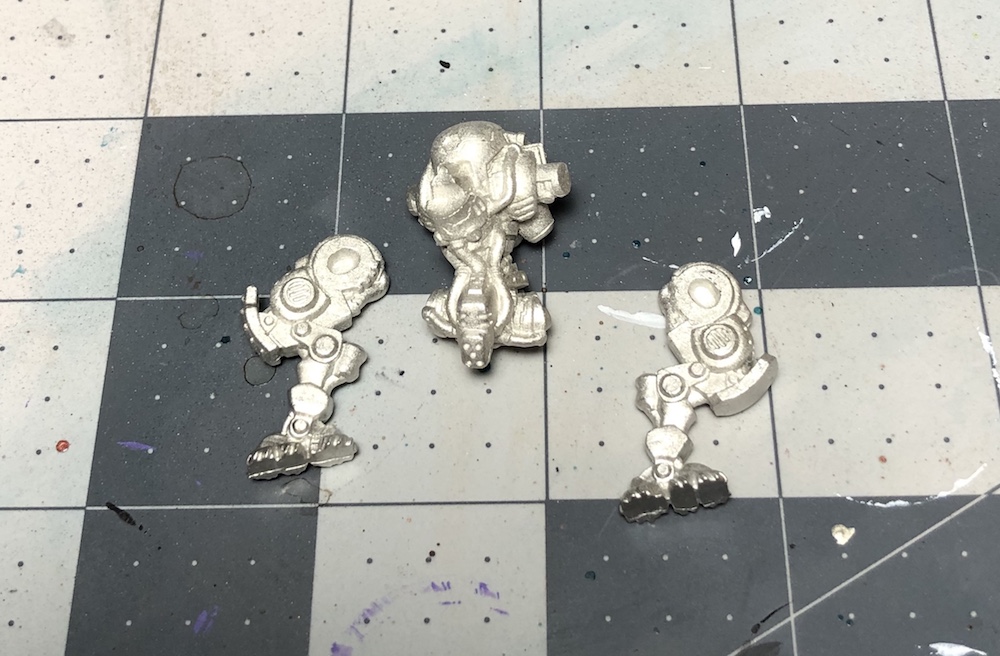 Then we’ll add the arms. Learn from my mistake: I should have added the Comm array before the arms, it fits near the back of the head, directly behind the left shoulder. I caught my mistake after taking the below picture. 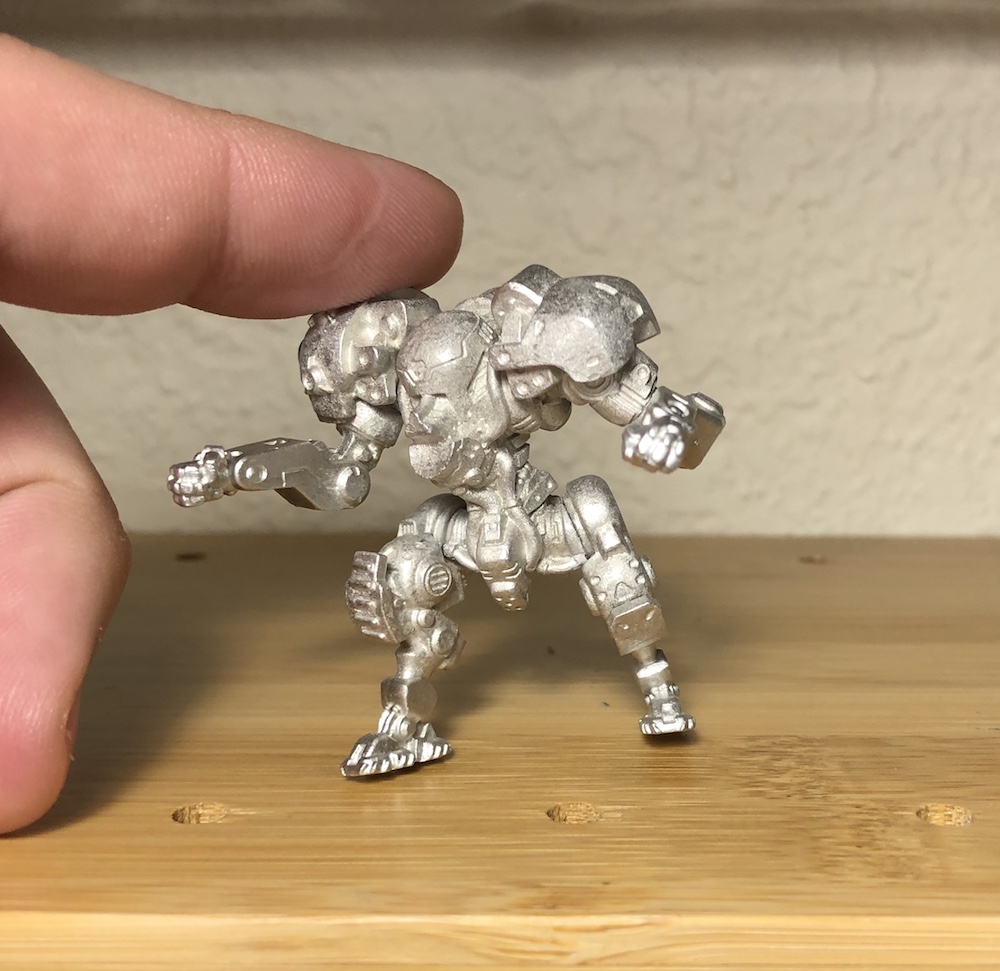 I added the head I thought looked coolest and it was time for weapons!

My weapon choices were purely made for aesthetic reasons. So when given the choice between the big gun or little gun…well there was really no choice at all. The shoulder-mounted guns are a great look, Predator would approve. 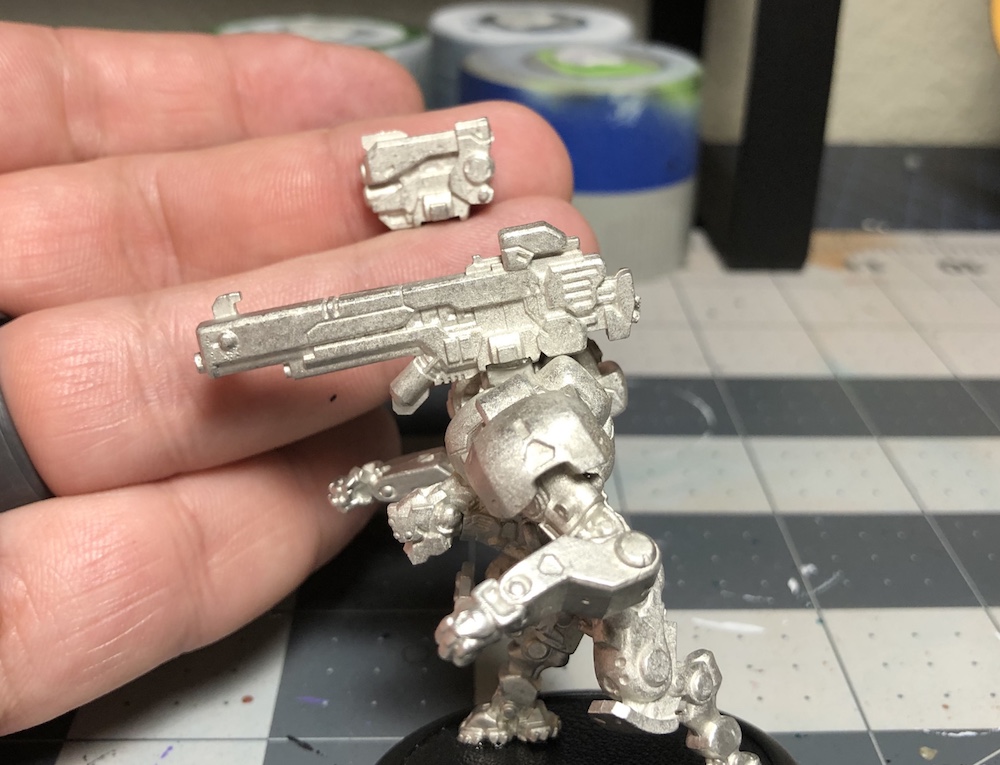 The arm weapons mount under the arms at the angled section. The weapons can easily go under both arms, and there is nothing stopping you from adding the same weapon to both arms. The Dusk Wolf has choices between a Ripper(chainsaw), Flame Thrower or Battle Rifle. I decided to go with the Ripper and Battle Rifle. 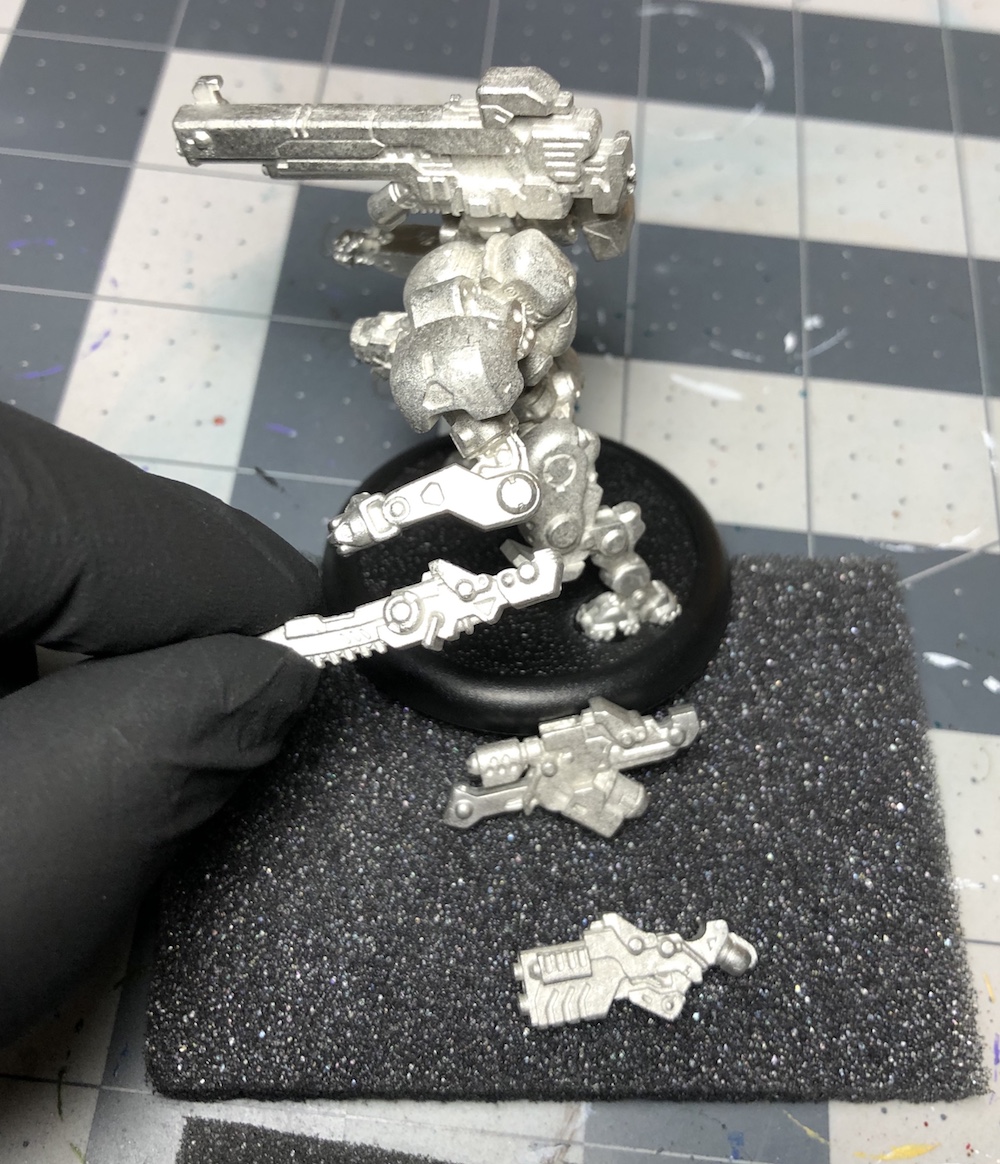 Here are some shots of the finished Dusk Wolf. 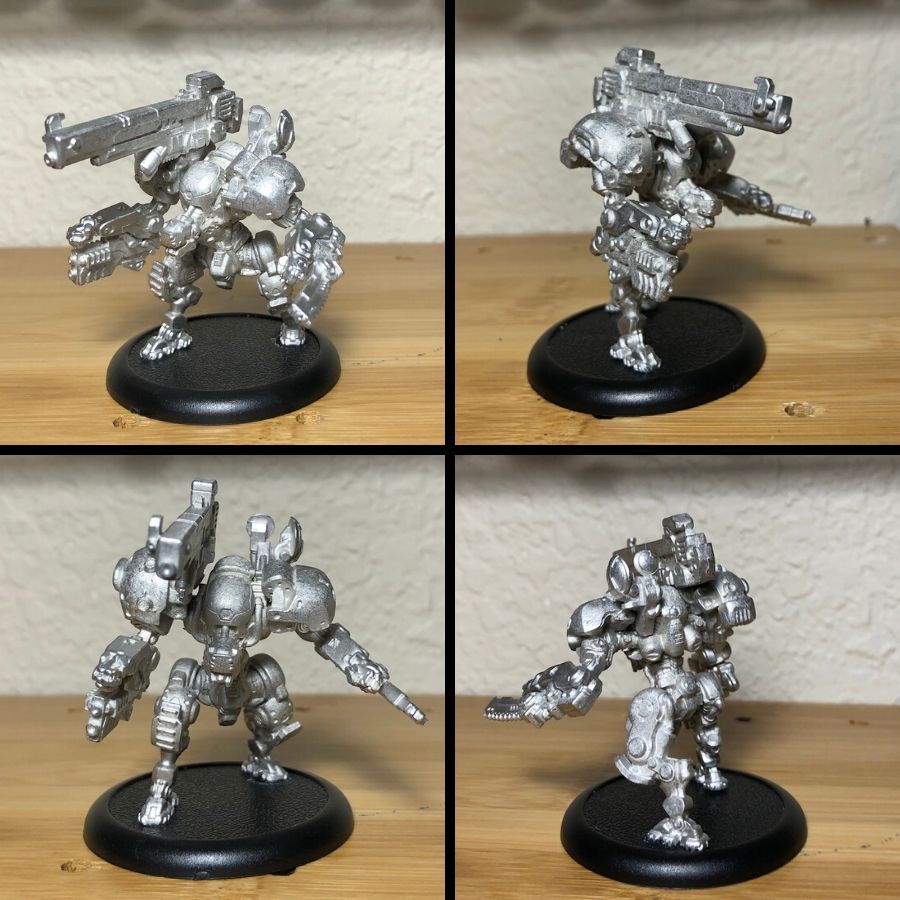 A quick zenith prime and this warjack is ready for some paint! 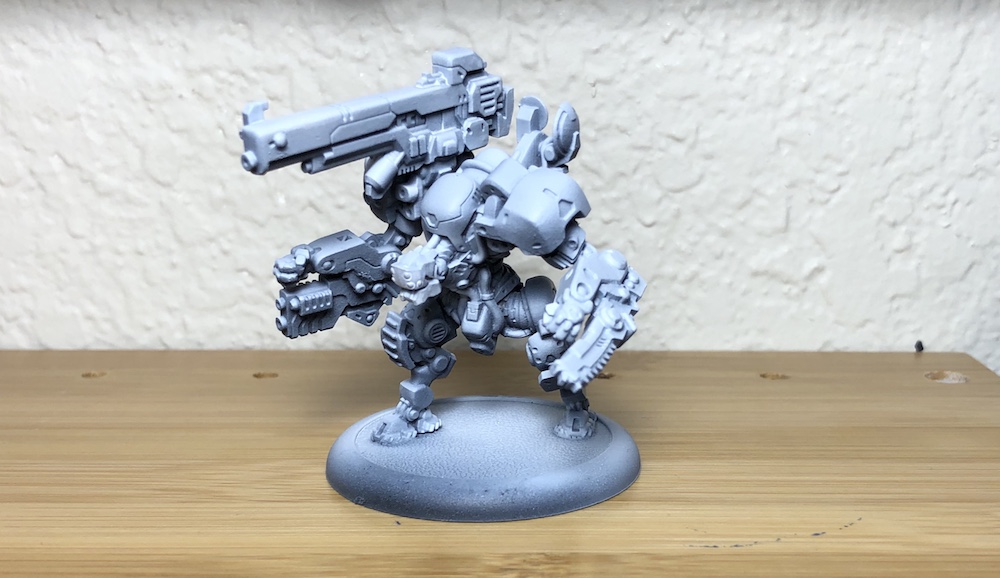 This model looks fantastic and I’m looking forward to figuring out a paint scheme for it. With the lights being 50mm I’m excited to see the imposing stature of the heavy warjacks on the table!

The Kickstarter only has a less than a day remaining! You can find a ton more images and videos about Warcaster there or at the Warcaster Neo:Mechanika website.

Click here to become a backer before it’s too late!