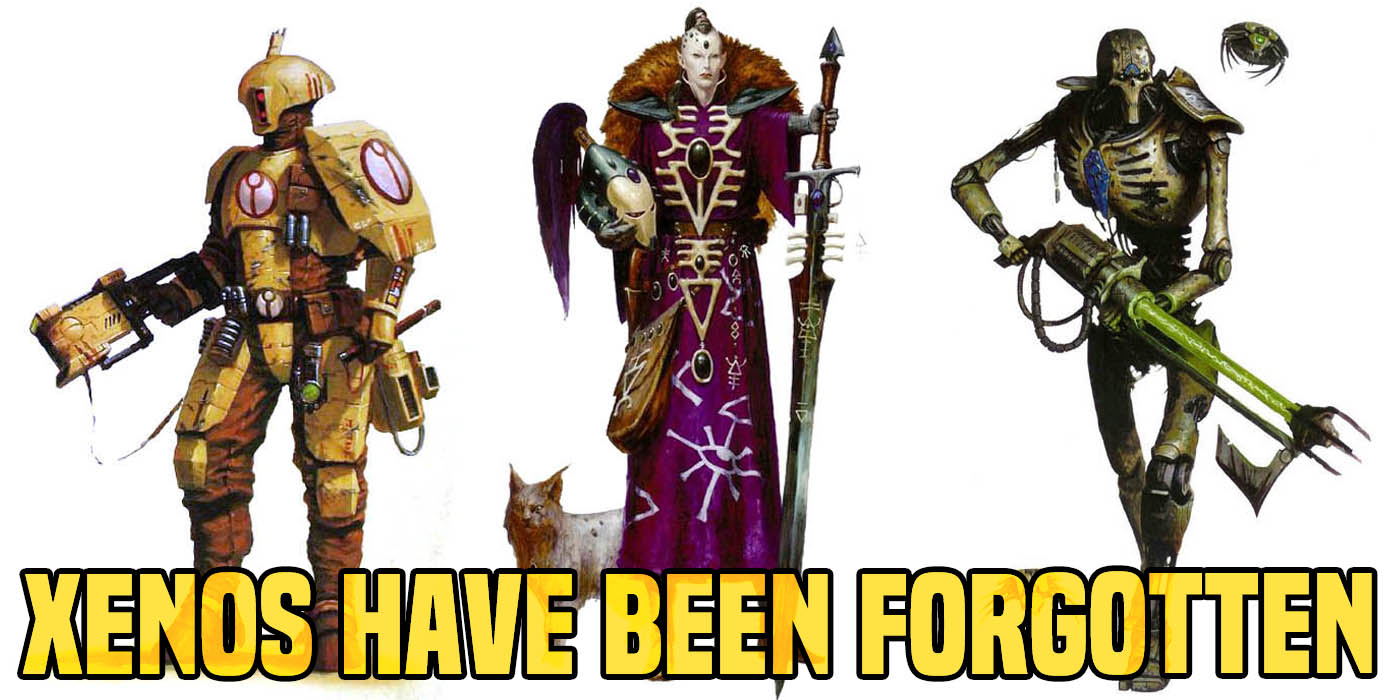 Let’s talk about what’s been happening with the Xenos factions in 40K – and maybe for good reason.

Warhammer 40,000 is a massive setting. At the heart of it is the embattled Imperium of Man, attacked on all sides. While the Imperium may be central to the lore, it’s not the only power in the galaxy. Aside from it there are the Powers of Chaos, Warp-spawned entities bent on the destruction of the physical realm, and a whole host of Xenos races. Each of these groups has a rich background, and had their own stories, dramas and epics. Yet over the last year in particular the various Xenos races have been forgotten in favor of a straight Imperium vs Chaos conflict. Let’s take a look at what happened.

Right off the bat let’s take a look at what books have come out recently. With in the last year there have been no new Xenos Codices released, the last one was Genestealer Cults in February of 2019. During that period there have been two Chaos books (CSM 2.0 and Chaos Knights), two Imperium books (Space Marines 2.0 and Sisters of Battle) and 6 Space Marine supplement books for a total of 10 Codexes, almost one a month. That’s a bit of a disparity there.

In addition to the 10 Codexes/Supplements there have been 7 additional campaign books released. Vigilus Ablaze focused on the Chaos vs Imperium conflict and contained only rules for Chaos factions. Out of the 6 Psychic Awakening books, two, Ritual of the Damned and Faith and Fury focused on the Chaos vs Imperial conflict, three of them, Blood of Baal, Saga of the Beast and The Greater Good contained Xenos fighting Imperial forces, while one, Phoenix Rising focusing on Chaos vs Xenos. None of these books were exclusively Xenos based (though Phoenix Rising did contain only Xenos rules) and only in the Great Good and Phoenix Rising could the Xenos even be consider the stars of the show, in the others they are merely the enemy that needs to be stopped (Blood of Baal likely being the worst offender since it jams rules for many Hive Fleets into a book focused on one Leviathan). This gives us a total of 17 books this year, of which only 4 contained any Xenos and only really focused on Xenos factions, with no exclusively Xenos books.

The Story (Or Lack Thereof)

8th Edition fully switched the focus of the game to the Imperial vs Chaos fight. This is clear from just looking at the new primary graphic for the game’s launch, a half Primaris and half Chaos. While this had certainly been a trend for a while, the opening of the Great Rift and the massive Chaos push made the focus of the story clear. This is a setting in which a divided Imperium must rally against it’s oldest foe. As the story has focused more and more on that conflict the other races have been pushed to the side. Two years ago I wrote about how the majority of the Xenos factions, Orks, Necrons, T’au and Nids, didn’t have a focus or a real story (creatively not one connected to the main story). That remains true to this day, with nothing in the past two years really changing that. These races in generally are just…out there, hazards to be dealt with rather than real threats. In TV parlance, they are monsters of the week, not the season big bad. Even internally they don’t have much of a real narrative going on currently, with the exception of the T’au who at least have a bit happening.

The one thing that has changed in two years is that even the Aeldari have been pushed aside. Coming into 8th from 7th’s Rise of the Primarch, the Aeldari actually had a real plotline going with the rise of the Ynnari and the possible reunification of their shattered race. This even managed to tie into the main plot as there were, possibly sinister, connections between Yvraine and Guilliman and Cawl. So far however none of this has gone anywhere, the Ynnari plotline has mostly fizzled and Yvraine has kind of  been pushed out of the main story (the Dark Imperium novels for instance, which tell the main story of Guilliman make only passing reference to Yvraine).  Even Blood of the Phoenix, which was supposed to tie them in to the Psychic Awakening story was unconnected from an overarching plot and took place in the past, so didn’t actually move the story forward at all. Storywise the Xenos haven’t had an impact or done anything of importance in years.

Now there may be good reasons for abandoning the Xenos plots. I think one major reason we’ve seen this is due to the Horus Heresy novels. Back in 2006 when the first books where published I don’t think anyone knew, or guessed, how big a hit they would be and just how big and long the series would be (56 books and counting). The Heresy Era soon became by far the most popular 40K (30K) story and spawned a whole game of its own. The books are widely popular, and despite being fragmented do tell a single, massive, narrative. One focused on the Chaos vs Imperium fight, where the occasional Xenos are sideshows and monsters of the week. Thus when looking at what players and fans like, it shouldn’t be any surprise than GW would start to move 40K’s setting to be more like that of the Horus Heresy, focused on Chaos vs the Imperium. After all they would want to replicate the success of the Heresy and give people what they seemed to want.

Nor is a more focused story on it’s own a bad thing. You can generally tell a deeper, more understandable story by focusing on a core part of it, and they’ve chosen, literally, to focus on the most human part of the story. Given that it’s natural that the Xenos would fade into the background. For Xenos players, and arguably from a gameplay perspective, this is bad, but narratively it makes sense. The last few years have seen the 40K setting and story focused and rebranded into a human story, one that focuses almost solely on Imperial/Chaos conflict (of the 10,000 year old Imperial Civil War), with other factions become minor side characters to the central drama. How you feel about this will vary, but there seems to be little doubt that the Xenos are being left behind.

Let us know how you feel about what’s happened to the Xenos, down in the comments!