In response to the infernal threat facing the world, old enemies have banded together in the new theme force Flames in The Darkness. Two new solos have recently been released to further aid this theme in fighting against the evils of the infernals.

Today we’re going to examine two new solos: the Thamarite Advocate and Glyn Cormier, Illuminated One. While both solos are mercenaries (and Glyn is even partisan: Cygnar), they both look most at home in the Flames in The Darkness theme. In fact, neither one can be taken in a pure mercenaries force if you are using any of their non-Flames theme lists. 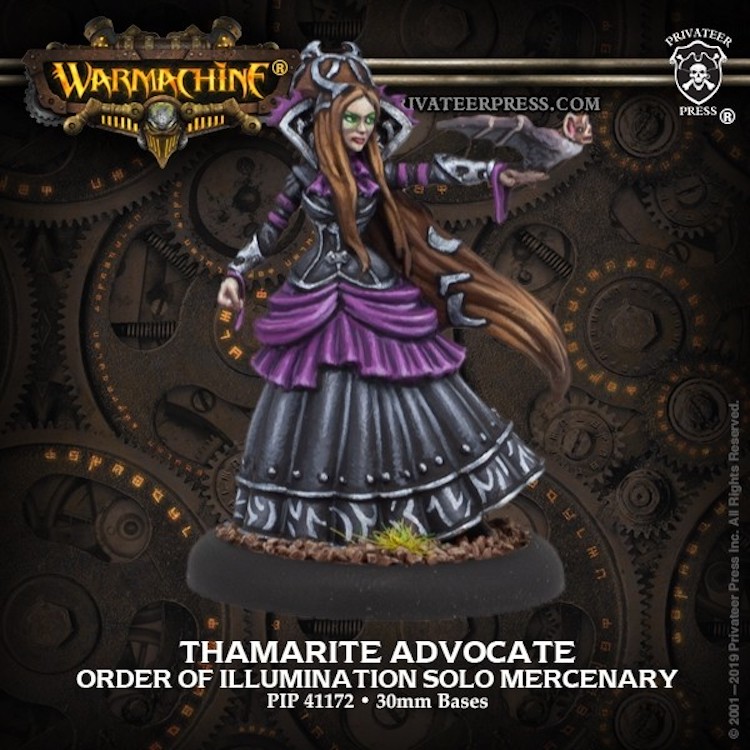 The Advocate is a fairly cheap spell-casting solo with three fairly useful spells. She comes with no weapons of any kind and low armor, so she should not be on the front line. She has two spells we’ve seen before plus a new one that is unique to her (for now).

Her older spells are Fell Curse and Hexbolt. Hexbolt gives her a decently high POW magic attack that can also shut down special actions and power attacks. This is situational but can be really good in certain situations (especially against another spellcaster who won’t be able to use magic ability while under the Hexbolt effect). Fell curse is always nice when you need to remove a Tough target, but she will have to be very close for an arm 12 model.

Her new spell, Barring The Gates is very thematic for fighting against the Infernals. It has 2 effects. First, it acts like the Arcane Suppression animus, increasing the cost of spells cast in her command range by 1. second, it makes any infernal masters that find themselves within 8″ have to spend one additional essence point to summon a Horror. The range on this ability is very short, but if it works you can really put some pressure on your enemy’s resources.

It is important to note that this ability only increases the cost for models that spend focus/fury/essence, it will not have any effect on models using magic abilities or spell slave. It can also affect animi which could also be a really big deal, as warbeasts are going to be easier to get in range of power than most casters.

The other two abilities of note on her card are reposition 3, allowing her to apply her spell effects from further away, and sucker! Sucker lets her stay safer than her low stats would imply, and also makes her quite nice for holding a close flag in a steamroller scenario.

Flames in The Darkness is obviously a good place for her, mostly because you can take 2 advocates for free using one of your requisition points. In other factions, she will be useful for a cheap spell attack and her area spells, but she is competing against a pretty stacked field of merc solos for what is usually a single solo slot. There are a lot of lists that would like a cheap solo with a pow 13 shot, but it would be hard to choose her over someone like Harlow. 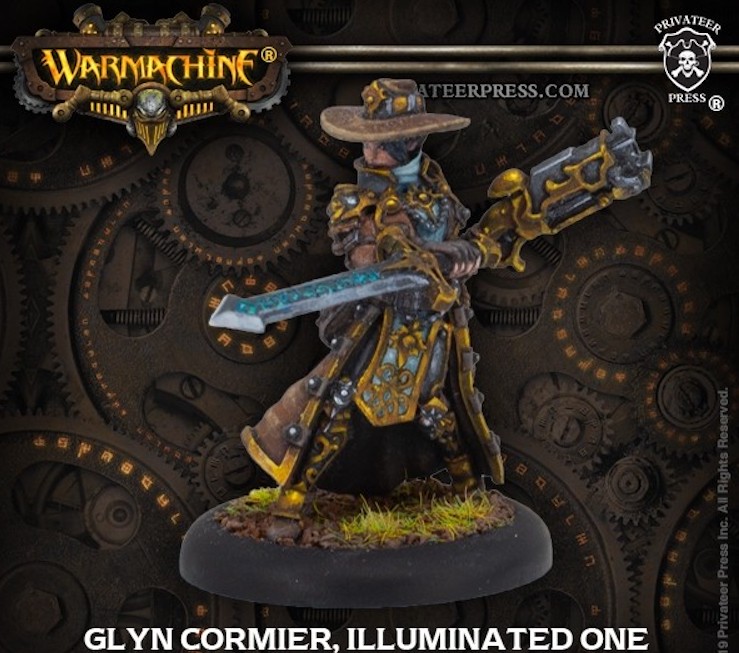 Glyn is a Morrowan solo and the leader of the Order of Illumination Vigilants. She has a nice package of special ability icons making her a good combat solo. she has everything you could want in a hit and run piece: AD, pathfinder, stealth, tough, dodge, reposition and true sight. She also has two magical weapons and a weapon master sword.

The really interesting thing that sets her apart from other skirmishing solos, however, is her unique weapon. Banisher has a special rule named (appropriately) Banish. An enemy model damaged by the weapon can be placed completely within 1″ of its location. Place effects are very strong in this game, but the trick here is that Glyn has to actually damage something for it to trigger. If you can pull that off with her un-boostable gun, she can have quite a presence on the table.

A 1″ place might not sound like much, but it has many potential uses. Move something out of a charge lane, turn something around for back strike bonuses, move a model that was placed just a hair out of your charge range close enough to be attacked by your heavy hitters. The list goes on. Unfortunately at POW 12, this gun will likely not be damaging heavies (at least not reliably). It also specifies it cannot be used on warcaster/warlock/Infernal master targets. This limits your options but is still quite an interesting ability on a solo.

Like the Advocate, Glyn is a little bit limited on where she can be taken. She does not appear in any merc themes other than Flames in The Darkness and works for a limited set of factions. She is partisan Cygnar, but still takes the merc slot in any list outside of Heavy Metal. At 5 points she has an awful lot of competition from very strong merc choices (thanks Riot Quest).

In a Flames list, she is best paired with a unit of Order of Illumination Vigilants, as she offers them her True Sight ability. This is really good as leadership ability. It doesn’t always come into play, but if you fight against a cloud wall or stealth-heavy list it can make all the difference.  We’ll take a look more in-depth into this unit in an upcoming article, and will talk more about what out-of-Flames lists might like them.

Glyn really wants some help from the rest of the list in lowering enemy armor or making her own attacks hit harder to make it more likely that she can damage her targets. A 2 point armor swing could mean that hitting heavies becomes an option. 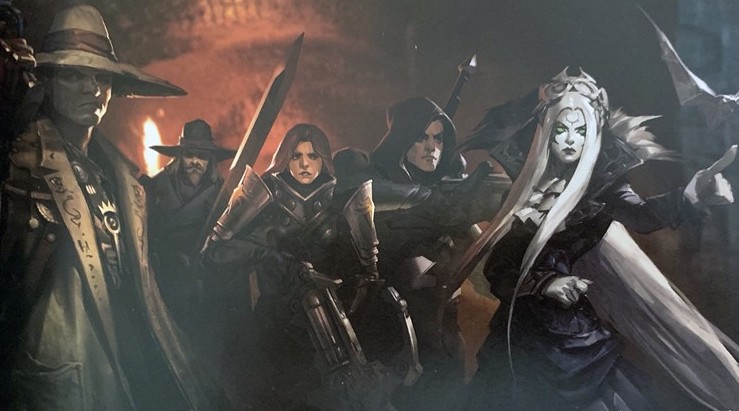 Overall I like both of these new solos. They are not big heavy hitters, but both offer some really interesting control options to be used alongside the archons and other powerful options in a Flames list.

What do you think of these two solos? Are they making it into your flames list, or are you needing those points for more Archons? Are their control elements strong enough to be used with their low effective ranges?