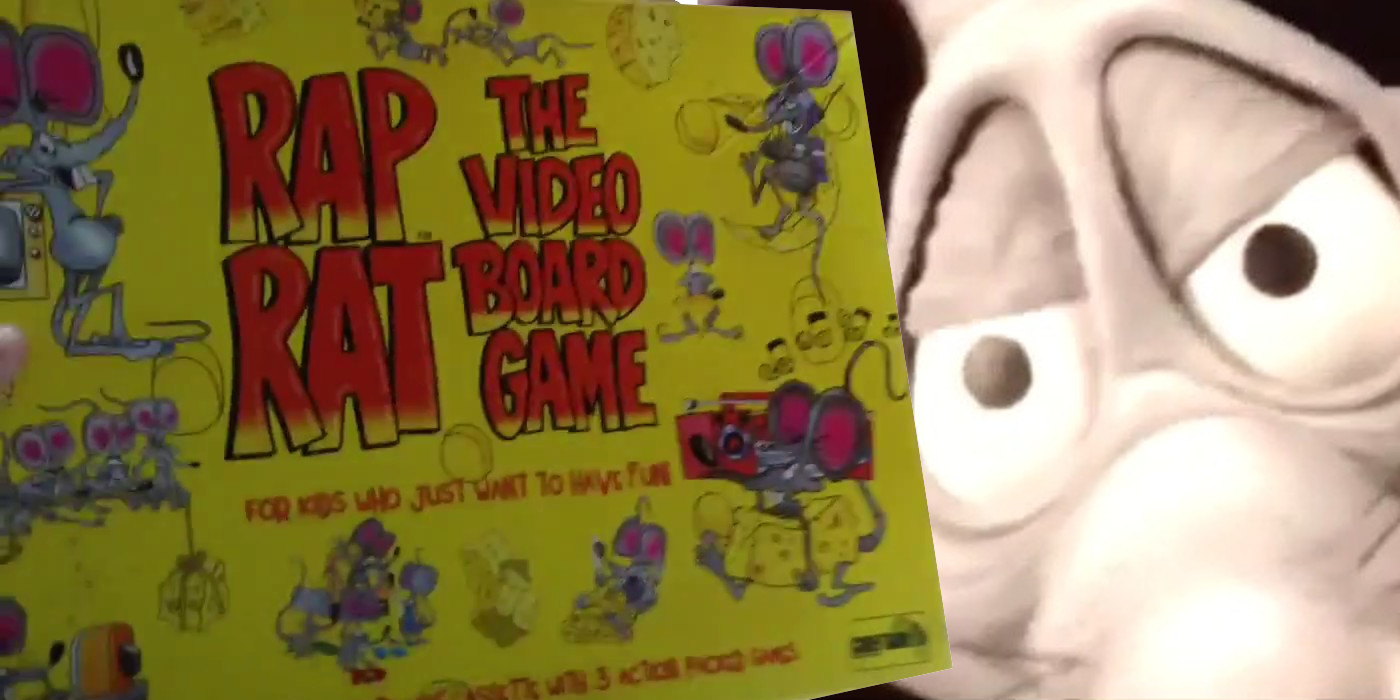 Rap Rat belongs to a very select group of board games (alongside Ouija Boards) to have been the subject of horror stories. Yes, really.

Not too long ago, we discussed Atmosfear. It’s a VHS board game, which was a “thing” in the late 80s and early 90s. The basic idea was that you’d have the video running while you play the game and the video would act as a “game master” of sorts, adding random events and some pretense of interactibility. 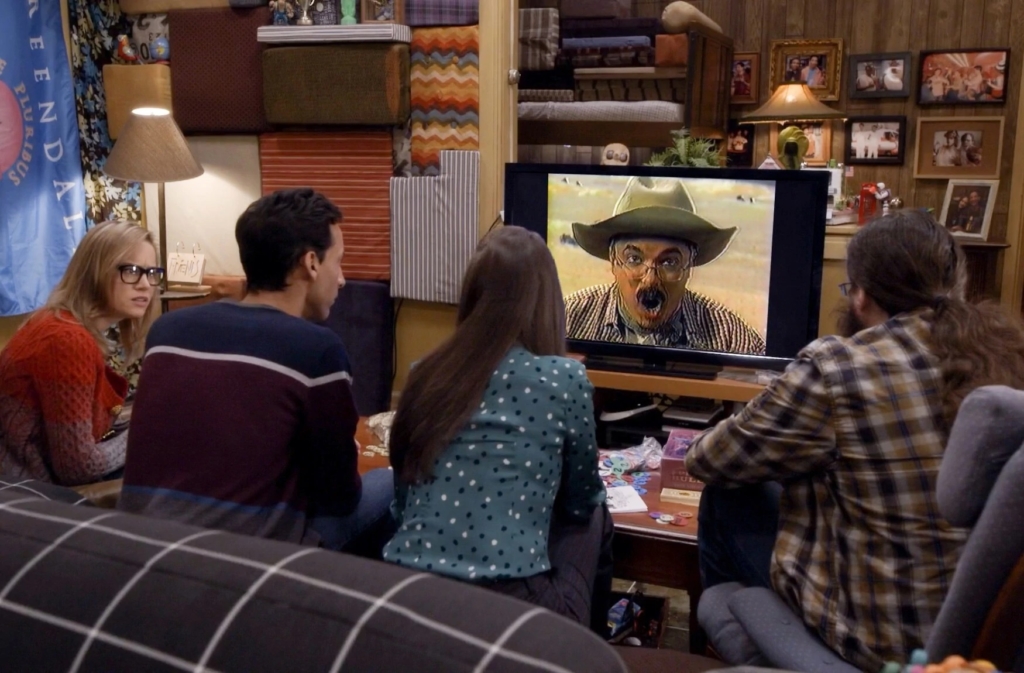 Remember that time Captain Marvel was on Community?

Looking back, Atmosfear is pretty cringey, but cringe is tolerable.

There Are Some Things Which Are Worse

For these horrors, once seen, will drive any sound mind to the brink of oblivion. A mind driven to the point from whence there is no return and the only certainty is a doomed insanity.

This horror has a name, but I dare not speak it nor will I write it down. For surely this thing would know I have spoken its name aloud. There are powers in this world we can not understand and this creature, this beast, has a strength we can not fathom. No! I must tell what I have seen. Even though this act will surely drive me mad, I could not live with myself knowing I had witnessed this great evil and done nothing to warn the rest of humanity. If this be my last entry, let my sacrifice not be in vain.

I must tell the world of Rap Rat.

Congratulations if you’ve made it this far. Not many do.

This absolutely cursed monstrosity with scissors stabbed into its head is Rap Rat. 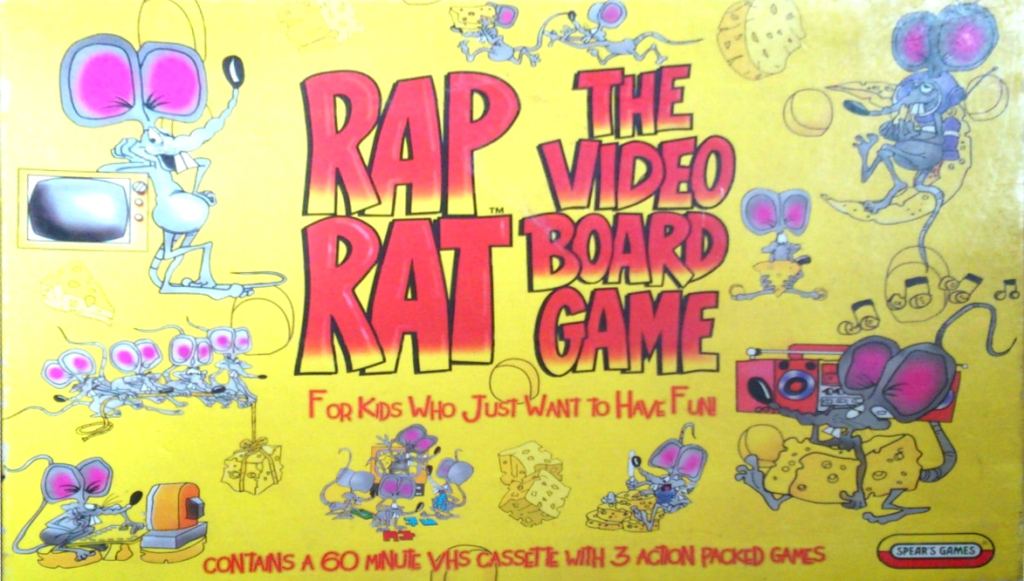 Released in 1992, this a competitive roll-to-move crime against humanity with set collecting meaninglessness. The object of each player is to survive the psychic onslaught for long enough for the game to end with all players losing equally. There are no winners in Rap Rat: The Video Board Game. Only husks left behind. 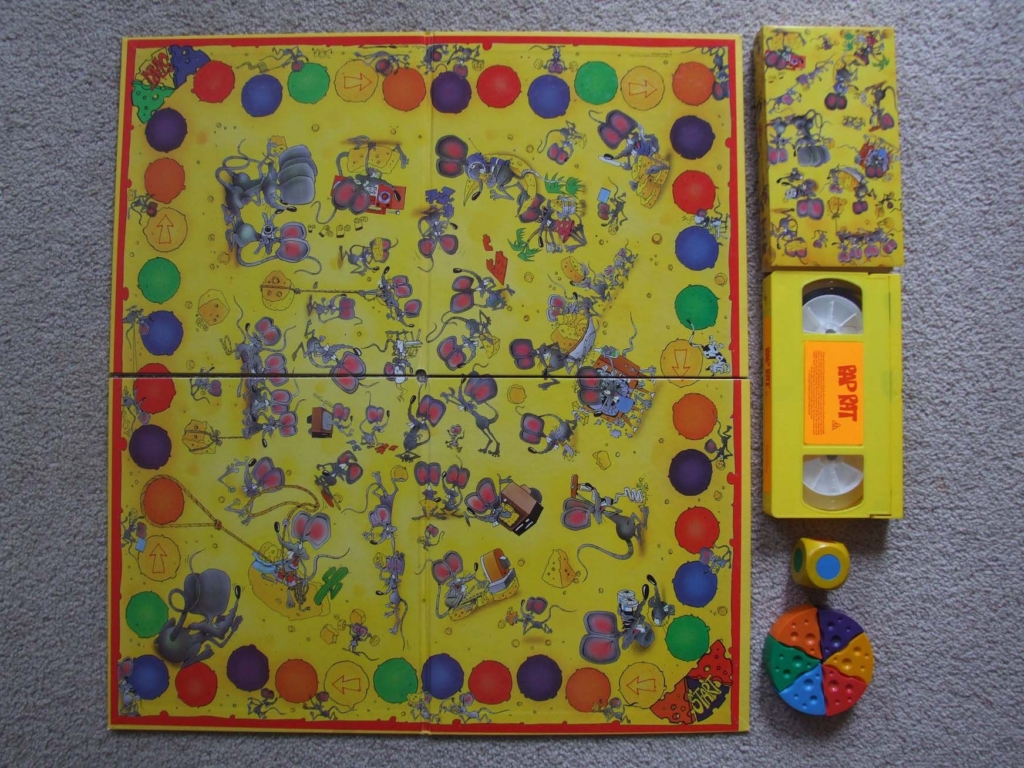 Each player spends their miserable time at the turbulent whims of the game. Spending what few precious moments the have left in this world, rolling the die and hoping to land on their own color. If they do, they gain a puzzle piece of their color. 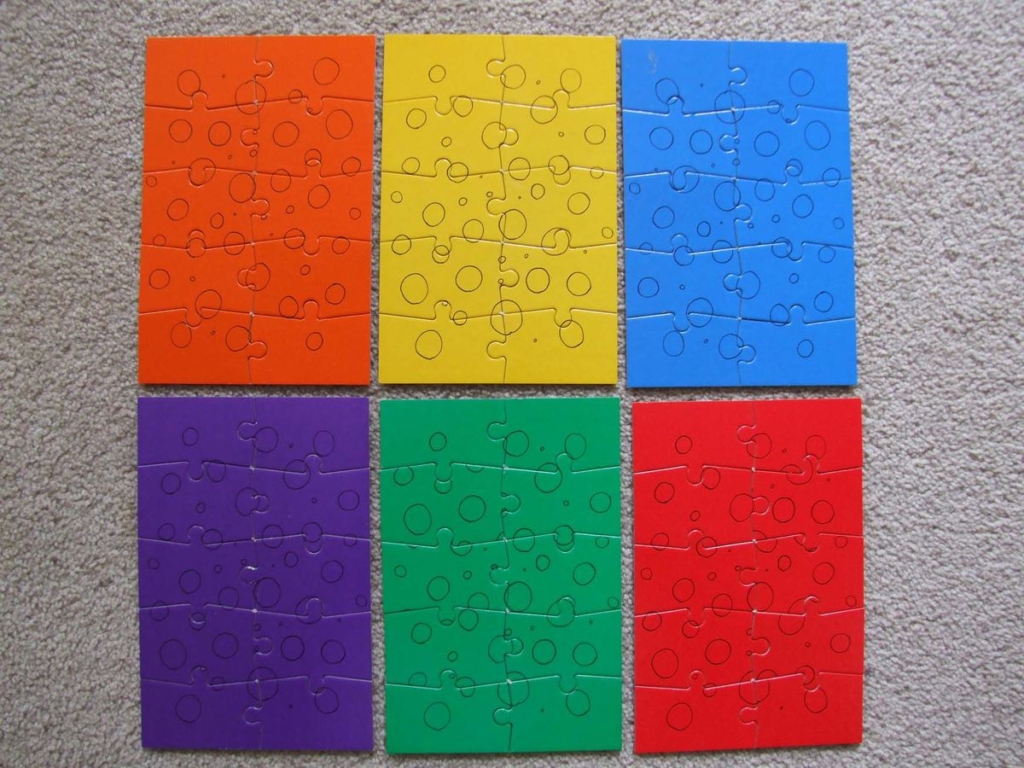 The first victim to complete this Sisyphean puzzle is deemed the winner. If that were ever to occur. But no, Rap Rat is an unjust god. 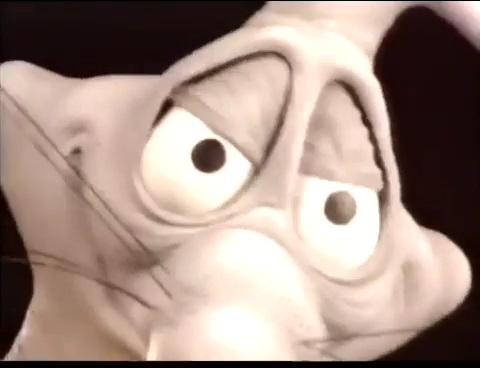 Every few minutes, on a whim, Rap Rat will take away puzzle pieces from the players. If only to sate his gluttonous cravings for human anguish. But even that isn’t enough. As time goes on, Rap Rat will consume the very world in which he lives.

Additionally, Rap Rat will demand the players dance for his entertainment. Occasionally, calling for specific players to jump up and down and shout “Cheese!” and other humiliating ordeals. These tasks serve no purpose other than for Rap Rat to show that he can. 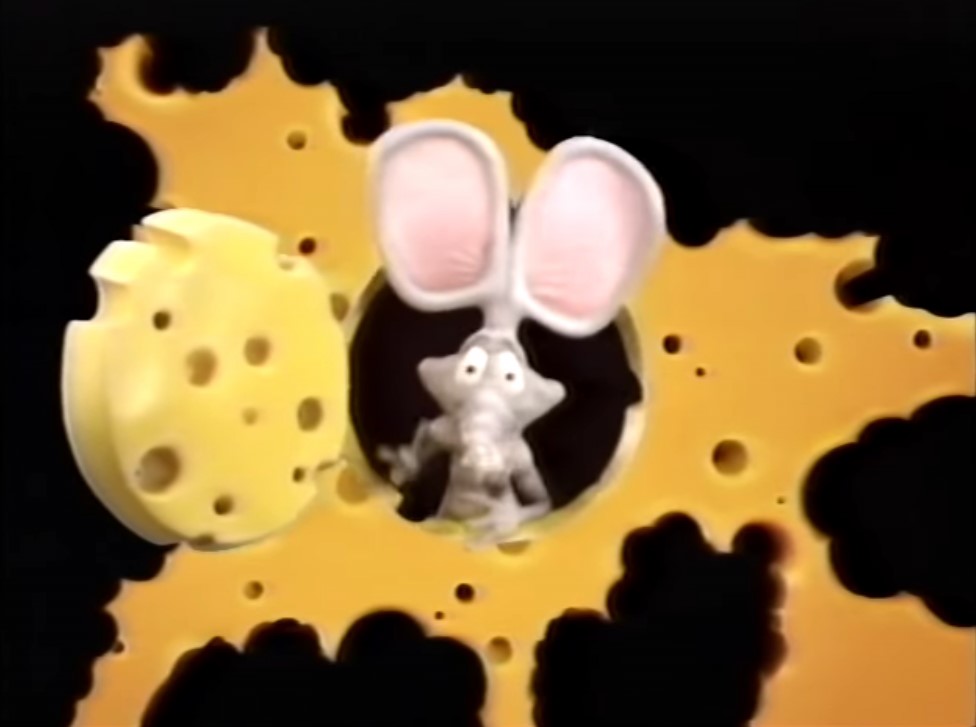 You need proof Rap Rat is a being of untold power? Where are his legs in this shot?

If Rap Rat is able to go all Galactus on his cheesy confines before any player is able to complete their puzzle, all players lose but their torment is not over. Rap Rat demands the players rewind the tape and play again until they are able to beat his wretched game.

How impossible is this game?

How long do these hopeless souls have to complete their puzzle? Well, the video posted above is 40 minutes long. But we know Rap Rat is a conniving beast. The video has 3 games, the first game being the “easiest” at just about 12 minutes! To collect all ten of your puzzle pieces, you must land on your color ten times. On the board there are 6 spaces of each color, spaced equally apart. So, at best, if you rolled 6 ten times in a row, you’d win as fast as possible.

EVEN DOING THAT (odds: 1/60,466,176) you still couldn’t take more than 1 minute and 12 seconds per round to have enough time to roll the required ten times in the 12 minutes allotted. In a 4 player game, that’s no more than 18 seconds per player!

On top of that, Rap Rat occasionally steals your puzzle pieces! And all of this is assuming you’re rolling the best you possibly could.

ON TOP OF THAT, you have to complete the random jumping tasks giving to you.

This is without a shadow of a doubt, the worst game I’ve ever reviewed here on BoLS. This game is straight from the drug-fueled nightmares of some demonic entity.

The fear of Rap Rat has not gone unnoticed around the Internet. Like with any good terrorific product, Rap Rat has some horror stories written about it. 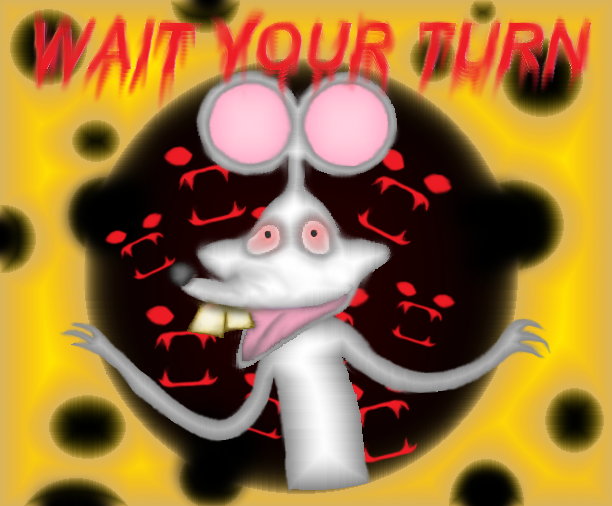 As well as some good ol’ fan art.

Truely, Rap Rat should stand alongside Slenderman and Momo as the monsters of the modern age.

Congratulations for reading this this far.

I’ll be awarding medals to anyone who watches the whole video.
I’m sorry you had to endure this.