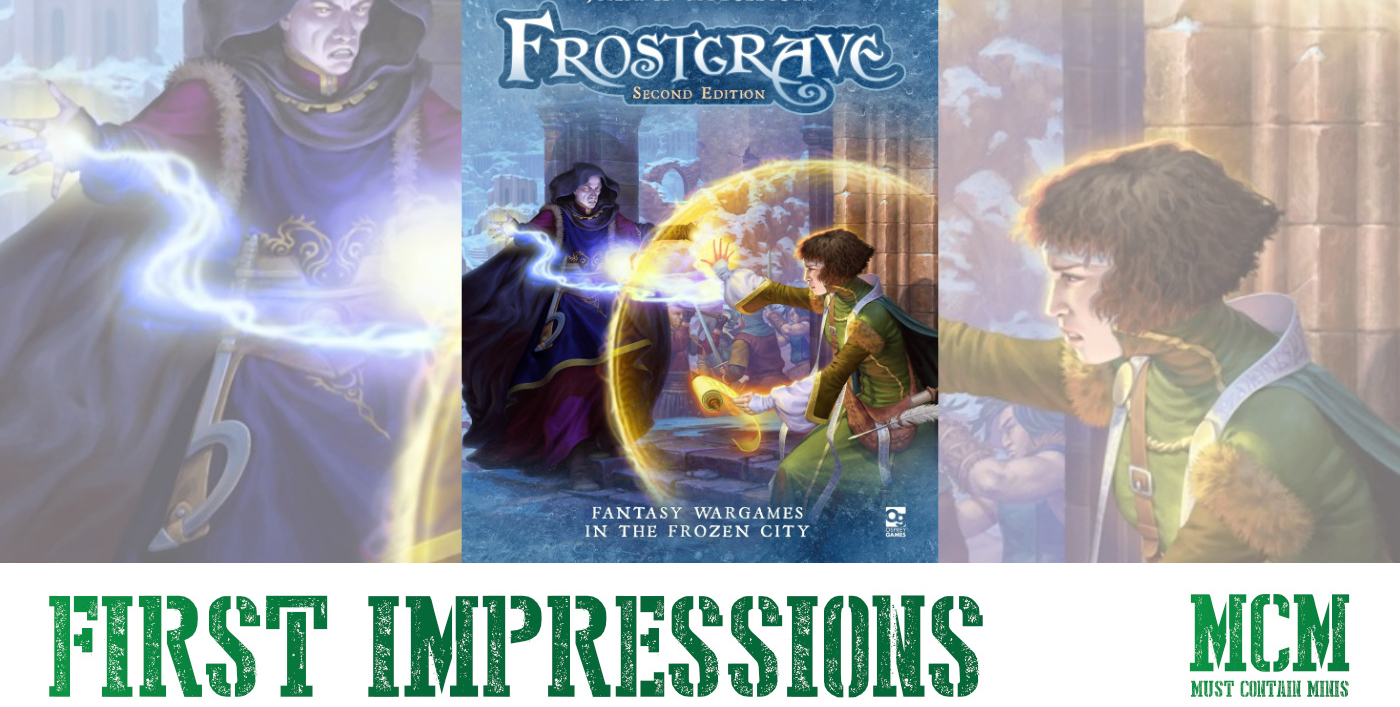 I just received Frostgrave the Second Edition Rule book and man am I excited! I immediately flipped through the rules to see what has changed since First Edition and to get a feel for the new rules.

For those who don’t know, Frostgrave is a miniatures game where warbands (generally 10 miniatures in size) battle it out to collect treasure and take it off the board. The game is scaled for 28mm miniatures and you are encouraged to use any miniatures that you have in your collection. You can use their official lines of figures for Frostgrave if you prefer. 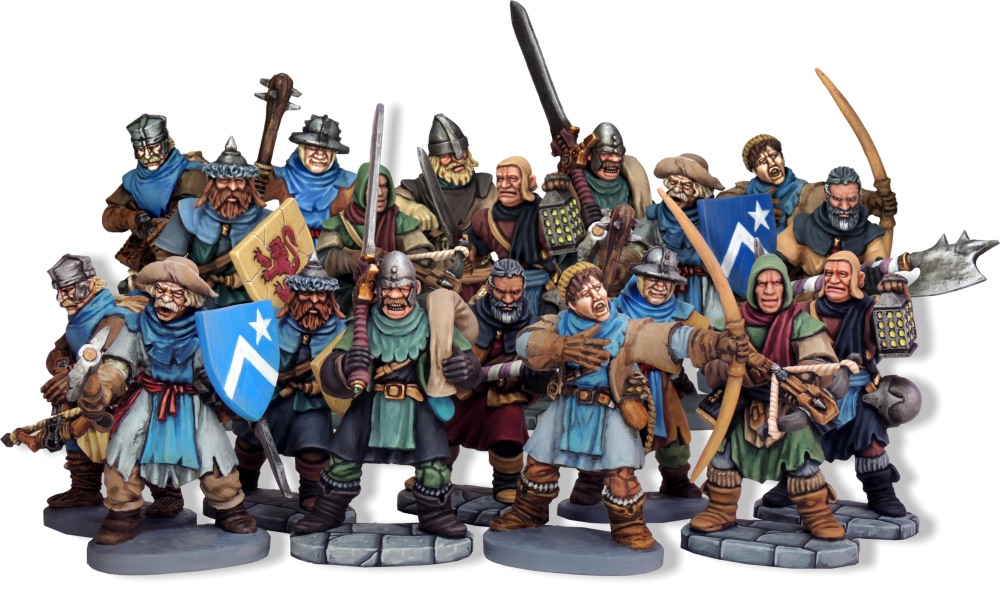 A standard Frostgrave table is 3′ by 3′. For larger (multiplayer) games, you might consider playing on a 4′ by 4′ table. That said, the game can be played on a table as small as 2′ by 2′ table if you want. You are encouraged to use lots of terrain and the general rule of thumb is that it should be hard for your models to see more than a foot on the table – due to line of sight blocking terrain.

The game runs on a D20 system and is a ton of fun. As with all Osprey Games books, the quality of this rule book is top-notch. The layout is great, the artwork is amazing and the rules are even better organized than before.

While I have not read through the complete book yet, I noticed a number of changes between the first and second editions. Below are a few of those changes.

The first change that I noticed was in Warband creation. The amount that you start with goes down to 400 Gold Crowns from 500 GC. The soldiers are also sorted out into two separate categories – Standard Soldiers and Specialty Soldiers. You can hire only four of the Specialty Soldiers.

The price for most soldiers also went up. Roughly 25 GC each for most soldier types. The Apothecaries went down in price and Thugs and Thieves are now free. This change makes it so that you are not completely decimated if you lose warband members and don’t have enough money to rehire them.

There are 10 new scenarios in the Second Edition of Frostgrave versus the First. That gives you a total of 20 scenarios to battle your way through.

The changes made to spells will make massive changes to how the game plays.

In First Edition, there were a few spells that I considered an “Auto-Select” (like Leap and Fog) and spells I wouldn’t touch. I look at the spells in Second Edition and they all seem better thought out for game balance.

Some spells got “nerfed” (Elemental Bolt now has a range limit and is +7 shooting instead of +8 shooting). Other spells now seem more useful. Overall, all of the spells seem like they might be an interesting choice now. 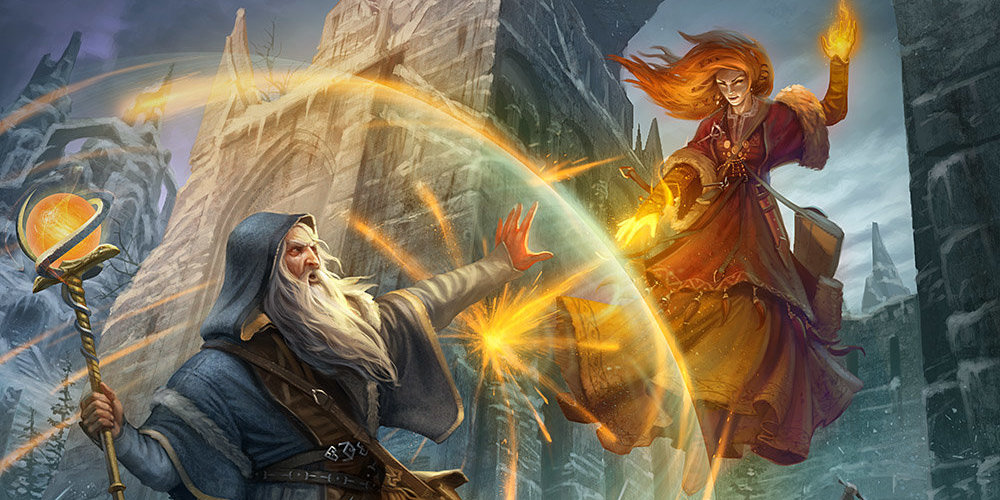 Thank you for joining me for this First Impressions Article. It ended up being a lot longer than I intended, but there is a lot of good stuff in Frostgrave Second Edition.

The core engine to the game remains the same, but there are a lot of little tweaks and changes that will make the game better. Now, I did not state it earlier, but Osprey Games designed the Second Edition book so that you can use all of the first edition supplements except one. The supplement called The Grimoire you can’t reuse in Second Edition. Personally, I think it is very good of Osprey Games and Joseph McCullough to make all of the books from First Edition usable in Frostgrave Second Edition.

If you want to read more, be sure to take a look at the longer original article or at my section on Frostgrave over on Must Contain Minis.

Disclaimer: Osprey Games sent Must Contain Minis the Frostgrave Second Edition Rule book for review purposes. While we accept review products, we are in no other way compensated for the posts on Must Contain Minis and reserve the right to give positive and negative reviews. This article is meant to help give you a better idea of the product to help you determine if you want to buy it.

This story is a shortened version of an article that first appeared on Must Contain Minis. Over there, you can find the original extended story as well as plenty of articles about all sorts of miniatures games. You will find posts about tons of indie games, historical games, and games from small publishers. You can also follow me on Social Media. I am very active on Facebook and share posts of a wide variety. I upload my best pictures to Instagram and am fairly active on Twitter.

Author: Jacob Stauttener
Jacob Stauttener is the man behind Must Contain MInis. He's been covering the tabletop and wargaming industry since 2016, with an emphasis on historicals, and the up and coming side of the industry.
Advertisement
Osprey Games Review
Advertisement