Enter the Underhive this week and kickoff with Blood Bowl’s latest team. 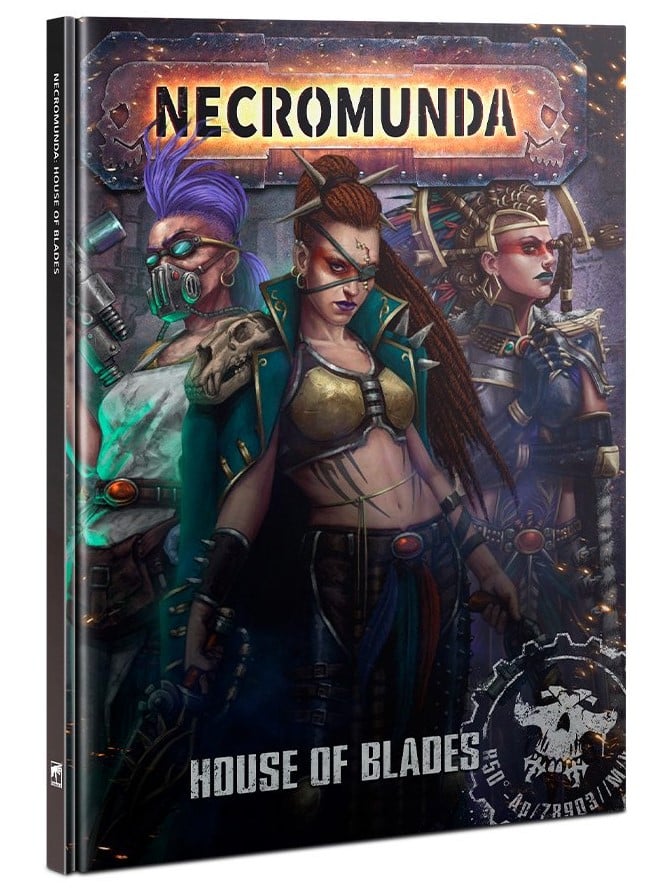 Death Maidens and Wyld Runners represent the two ends of the Escher lifecycle. All Escher adolescents grow up in the Wyld, learning everything they need to know about hive life free from the oppressive societies imposed by most other Clan Houses. As they come of age, they either join the clan or become Wyld Runners, reckless and bold explorers and beast wranglers. Death Maidens are fallen warriors of the Escher, raised from their graves in order to seek revenge for the House of Blades.

Expand your Escher gang with these six fighters and their cute but deadly pets. Wyld Runners may be armed with low-tech weaponry, in the form of whips and bows, but are no less lethal for it. Death Maidens come armed with a needle pistol and venom claw, allowing them to kill their enemies with the finest poisons from the House of Blades.

This kit is a treat for customisers and converters. Each Phelynx can be kitted out with a choice of interchangeable heads, while the Death Maidens and Wyld Runners feature the same arm and head fittings as the Escher Gang kit, allowing you to mix and match them for greater variety!

It is supplied with 10 Necromunda 25mm round bases. 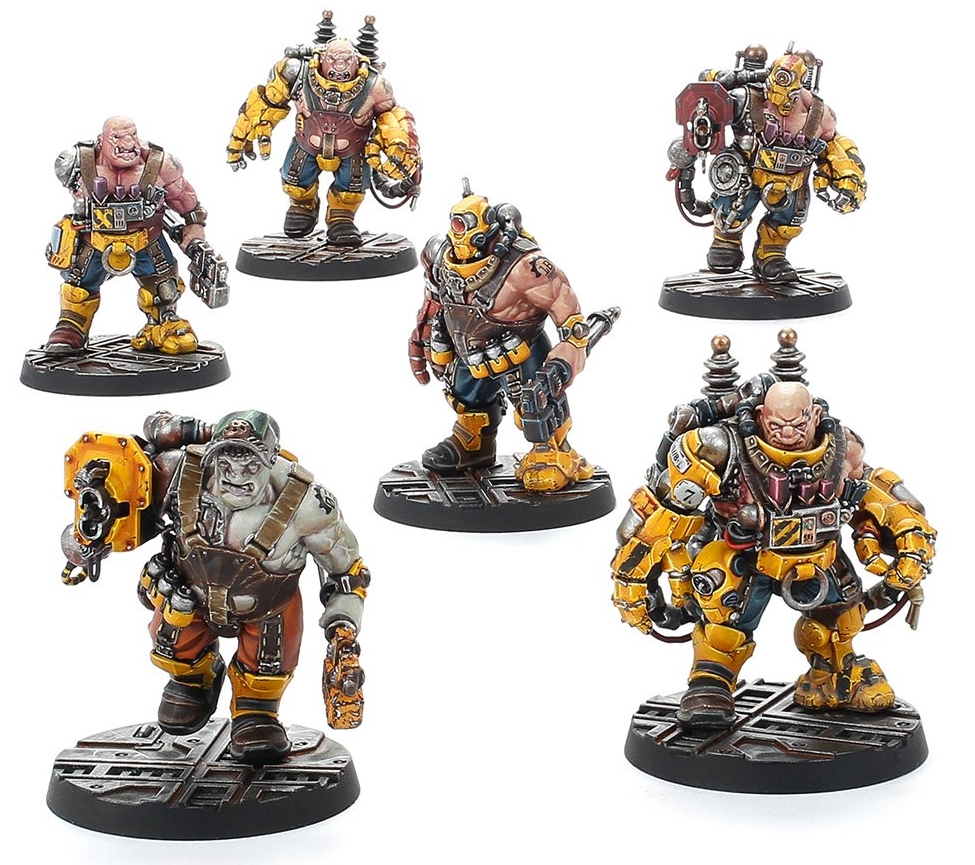 Ogryns are one of the most commonly seen strains of abhuman throughout the Imperium. What they lack in intelligence they more than make up for in terms of strength. As such they are in great demand in the underhive, where they fulfill a variety of roles. It’s not unheard of for these Ogryns to escape captivity and band together in gangs where they have a better chance of maintaining their hard-won freedom.

In the darkness of the underhive, might makes right, and there are none more mighty than the Slave Ogryns. They come with a variety of weapons with which they aim to keep their freedom. If you’re looking for a completely different way to play Necromunda with a low-model-count gang who love to get up close and personal then the Slave Ogryns are for you.

This 171-part plastic kits makes six Slave Ogryns. It comes with multiple head options, including a Lobo-slave variant, and also features different bodies, optional backpacks, augmetic fists, storm-welders, spud-jackers and the option to make Ogryns with only one arm – though they’re far from ‘armless! The kit is supplied with six Necromunda 40mm round bases. 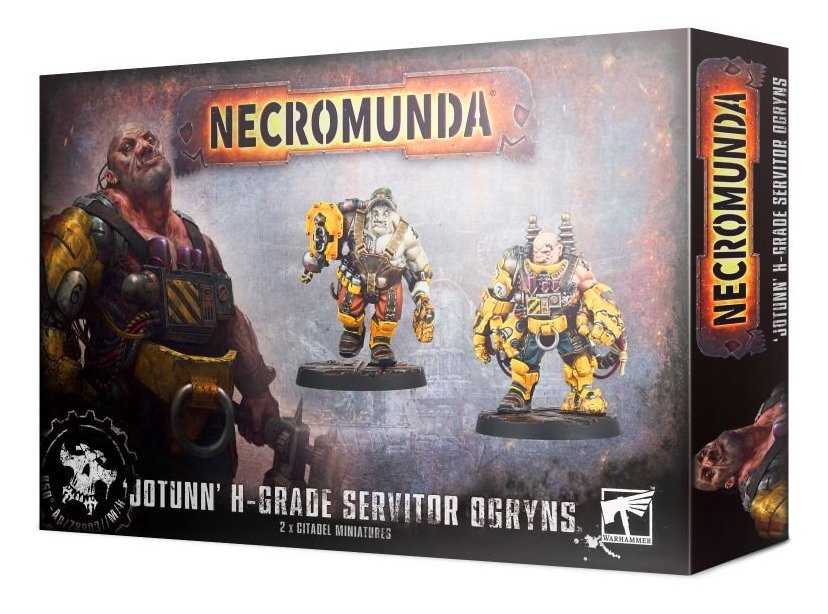 Add some extra strength to your gang with these two Ogryns – either add them to your Slave Ogryn gang or hire them as Brutes for any other gang. However you field them, these Ogryns provide the brute strength necessary to dominate the underhive.

This 57-part plastic kits makes two Jotunn H-Grade Servitor Ogryns. It comes with multiple head options, including a Lobo-slave variant and also features different bodies, optional backpacks, augmetic fists, storm-welders, spud-jackers and the option to make Ogryns with only one arm – though they’re far from ‘armless! The kit is supplied with two Necromunda 40mm round bases. 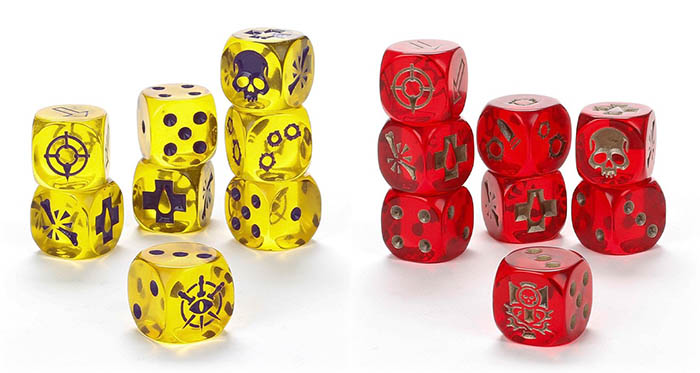 Declare your membership of the House of Blades with these Escher-themed dice. Honour your Matriarch and claim the underhive in the name of House Escher in style.

Forged in the very furnaces of House Goliath, these dice are sure to bring luck to any gang hailing from the House of Chains. Whether your Vatborn, Natborn or Unborn, you’ll want a set of these dice to show your allegiance to the Over-tyrant.

Expand your games of Necromunda with these 26 cards, representing the myriad tricks and schemes that can be used to gain an advantage in the underhive. As well as 18 gang-specific Tactics cards that perfectly encapsulate the way that House Escher fight, there are also 8 blank Fighter cards for you to keep track of your gang.

This box contains 26 100mm x 75mm cards for use in games of Necromunda:

Expand your games of Necromunda with these 26 cards, representing the myriad tricks and schemes that can be used to gain an advantage in the underhive. As well as 18 gang-specific Tactics cards that perfectly encapsulate the way that Slave Ogryn gangs fight, there are also 8 blank Fighter cards for you to keep track of your gang.

This box contains 26 100mm x 75mm cards for used in games of Necromunda:

This set of cards allows you to easily and quickly determine a mission for a game of Necromunda. Deployment cards show you how to set up, while Objective cards detail you what you’re fighting for. Peril cards represent the randomness of the underhive and Loot cards show your spoils of battle. The random nature of the cards should mean that no two games are ever the same, and they are ideal for both campaign and one-off play.

This box contains 50 100mm x 75mm cards for use in games of Necromunda:

Expand your games of Necromunda with a range of new Tactics cards that are based around the terrain of the underhive. With 12 gang-specific cards and 12 that can be used by any gang, you’ll be able to take advantage of your surroundings and emerge victorious.

This box contains 26 100mm x 75mm cards for use in games of Necromunda: 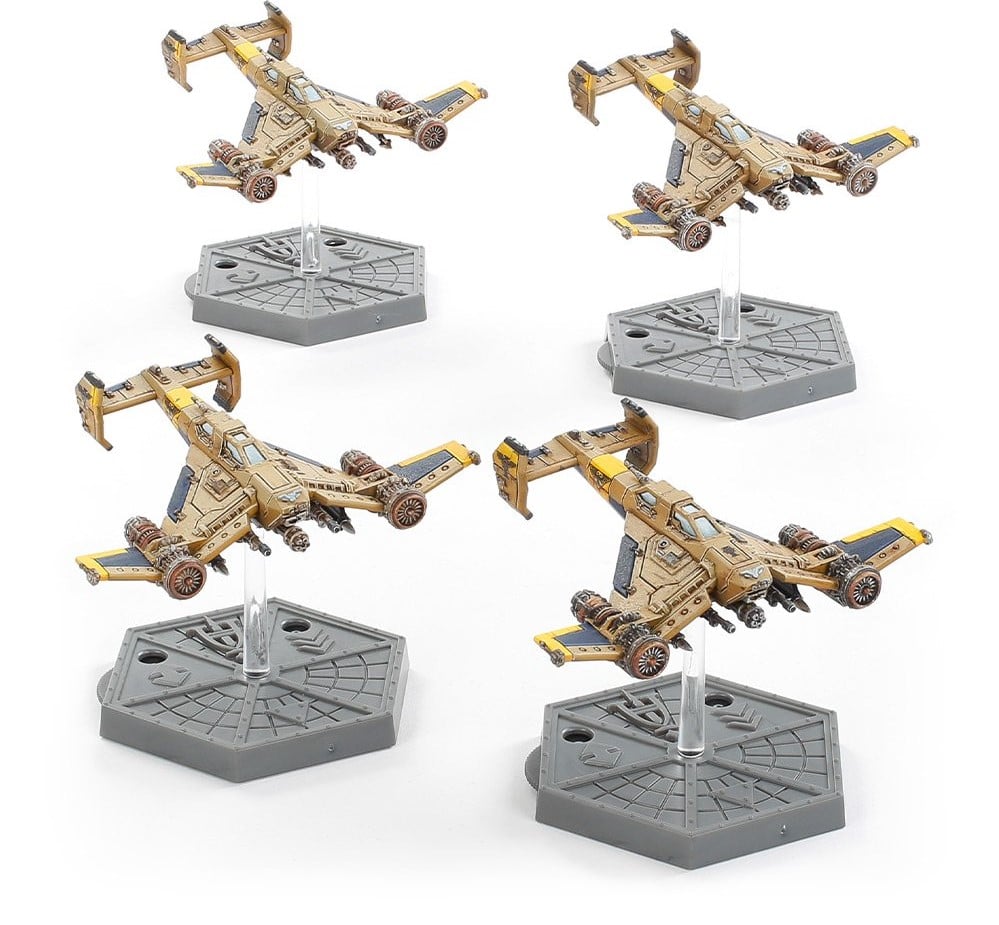 Named for the Avenger bolt cannons they bear, these fighters are often employed on strafing runs, raking armoured columns and bunkers on their weak side, rear, and top armour with mass-reactive bolt shells. With the ability to add missiles, bombs, lascannons, and autocannons, they can be geared up for a variety of mission objectives. When combined with the other fighters in the Imperial Navy, the Avenger Strike Fighter can bring tremendous amounts of firepower to both ground and air assaults.

Imperial Navy players are spoiled for choice when it comes to small, vicious dogfighters. Add Avenger Strike Fighters to the mix for some massive firepower, protected by a tail gunner – rare on such a small craft. Their mix of weapons allows you to make them a dedicated ground-attack craft, or a slugger to tail and take out slow-moving bombers. If you want to mix up the look of your squadron, these utilitarian craft look like nothing else in your forces, with their down-swept wings, exposed engines and wide tails.

– 4 plastic Imperial Navy Avenger Strike Fighter miniatures
– 8 autocannons, 8 lascannons, 8 Hellstrike missiles, 8 Skystrike missiles
– 4 Aeronautica Imperialis bases (each of which designates the model’s front, rear and side arcs, speed, and altitude dials, as well as a clear stand to connect the aircraft to the base)
– 1 Avenger Squadron transfer sheet. 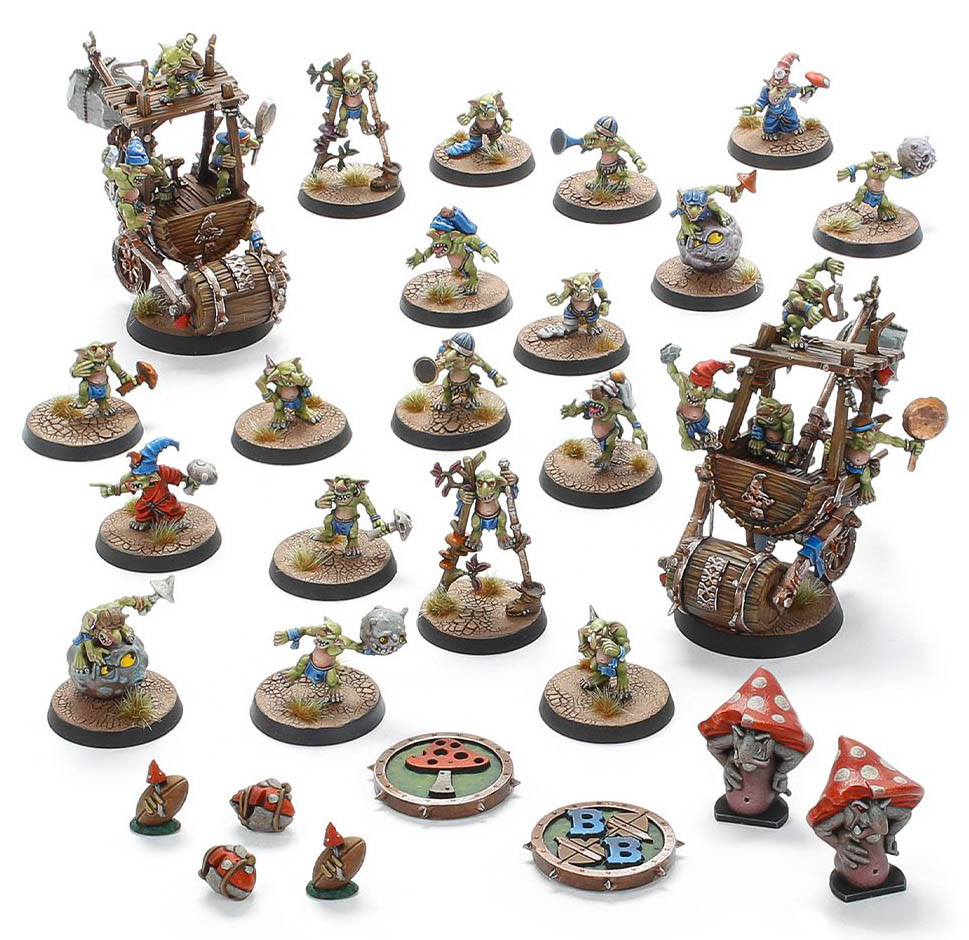 Snotlings have long admired the game of Blood Bowl from the sidelines, but rarely have they taken to the pitch for… obvious reasons. Well all that’s about to change, as the “Mighty” Crud Creek Nosepickers have blasted down the barriers to bravely (or foolishly) pave the way for their diminutive kin. They’re ready to flood the gridiron with a squirming, stinking wave of pint-sized players, along with all the zany contraptions and silly tricks they could dream up in their mushroom-addled brains.

While Snotlings may make Halfling teams look downright athletic, and Goblins seem burly in comparison, what these little blighters have in spades is, well, lots more of themselves! They’re so small and energetic, the refs can never keep count of how many are on the field at once! Their numerical advantage, combined with a willingness to bend and break the rules, makes them very unpredictable indeed. In short, Snotlings are all about the sort of wild shenanigans that make Blood Bowl an absolute pleasure to play. Not only are they fun, but they have some devious tricks that can actually win a game from time to time, quite literally keeping your opponent on their toes. 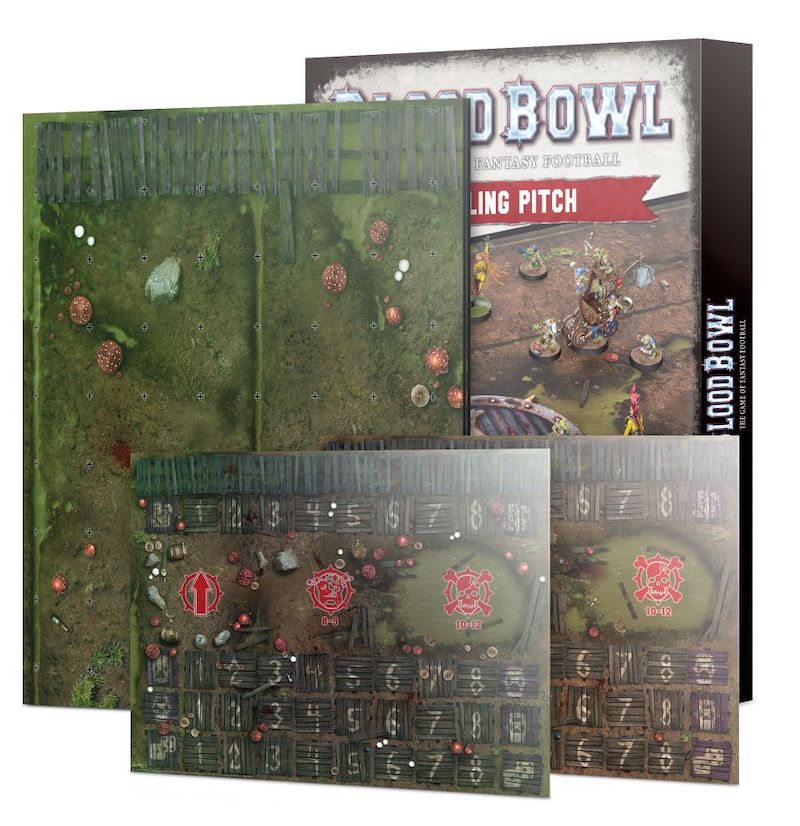 Snotlings win very few games, which means they have very little money to upgrade their Blood Bowl stadia, if they can even be called that with a straight face. More often than not, they’ll play their games in the fungal bogs where they grow their hallucinogenic mushrooms – the floating spores make for a rather vivid experience for visiting teams.

This double-sided board depicts a fungal bog in two states: a slippery, swampy bog, and a field in full fungal bloom, filled with spores. The end zones are marked by a decrepit boardwalk, and the dugouts are hardly a safe place to rest and recover.

The package includes two double-sided dugouts to match the two styles of pitch. Each dugout features the usual Score tracker, Reserves, Knocked-out and Serious Injury boxes, and a re-roll tracker. You’ll also find rules to represent the particular features of both sides of the pitch. 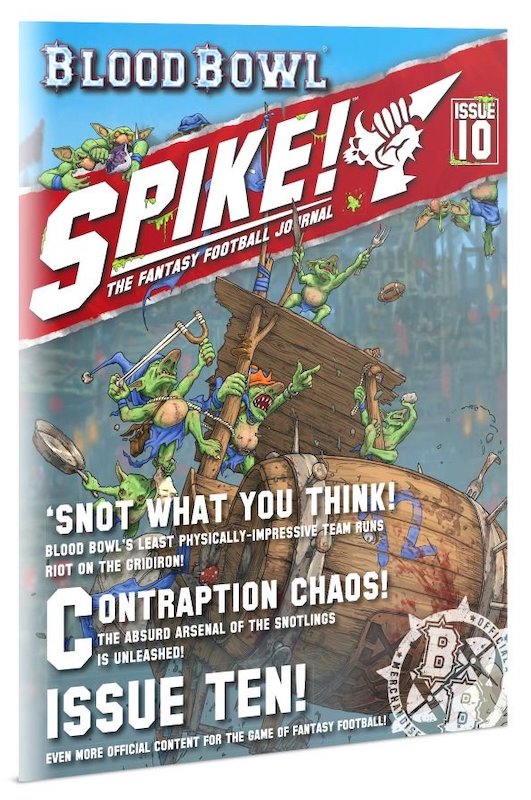 All 36 hilarious pages of this issue of Spike! Journal are packed to bursting with all the rules and advice a budding Snotling coach will need to play the ultimate underdogs in your games of Blood Bowl.

– It’s Not Easy Being Green: the history of Snotlings in the game, as well as a breakdown of the major positionals – Snotlings, Fungus Flingas, Fun-Hoppas, Stilty Runnas, Pump Wagons, and Trolls

– Profiles of famous Snotling teams, including the Crud Creek Nosepickers, plus rules, stats, and profiles for Star Players

– Star Player Spotlight: Ripper Bolgrot – this shockingly intelligent Troll mounted a successful legal battle to get Ugroth Bolgrot banned from Blood Bowl! His accomplishments on the pitch are equally impressive…

– Dirt from the Dugout: Mindy Piewhistle digs into the current trend of hiring Snotlings at Blood Bowl stadiums, and the somewhat less-than-desirable outcomes of the practice

– Star Player Spotlight: Fungus the Loon – This Goblin fanatic was raised by Snotlings, and he cares not for whom he swings his ball and chain, so long as he gets to smash things!

– Chat with the Rat: Hackspit Quillchewer interviews Zibbit, an enterprising Snotling who has dedicated his career to improving the design of the Pump Wagon

– Small, but Significant: Extensive and much-needed advice for playing, and winning, with Snotlings

– Star Player Spotlight: Nobbla Blackwart – Goblins and Snotlings both have a penchant for levelling the odds through a bit of, well, cheating! This Chainsaw-wielding loony adds some much-needed ultra violence to a Snotling team.

– A new episode of the Mighty Blow! comic 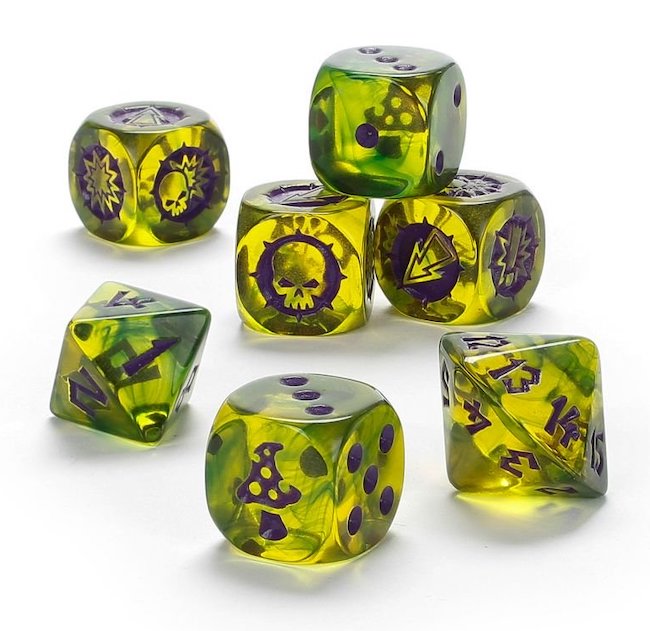 Snotlings have a… unique aesthetic. These translucent yellow-green dice look just like the substance that gave rise to the Crud Creek Nosepickers’ name! If you’re going to play Snotlings, you may as well go all in on the theme with this set of matching dice.