This Month On DM’s Guild and DriveThru RPG 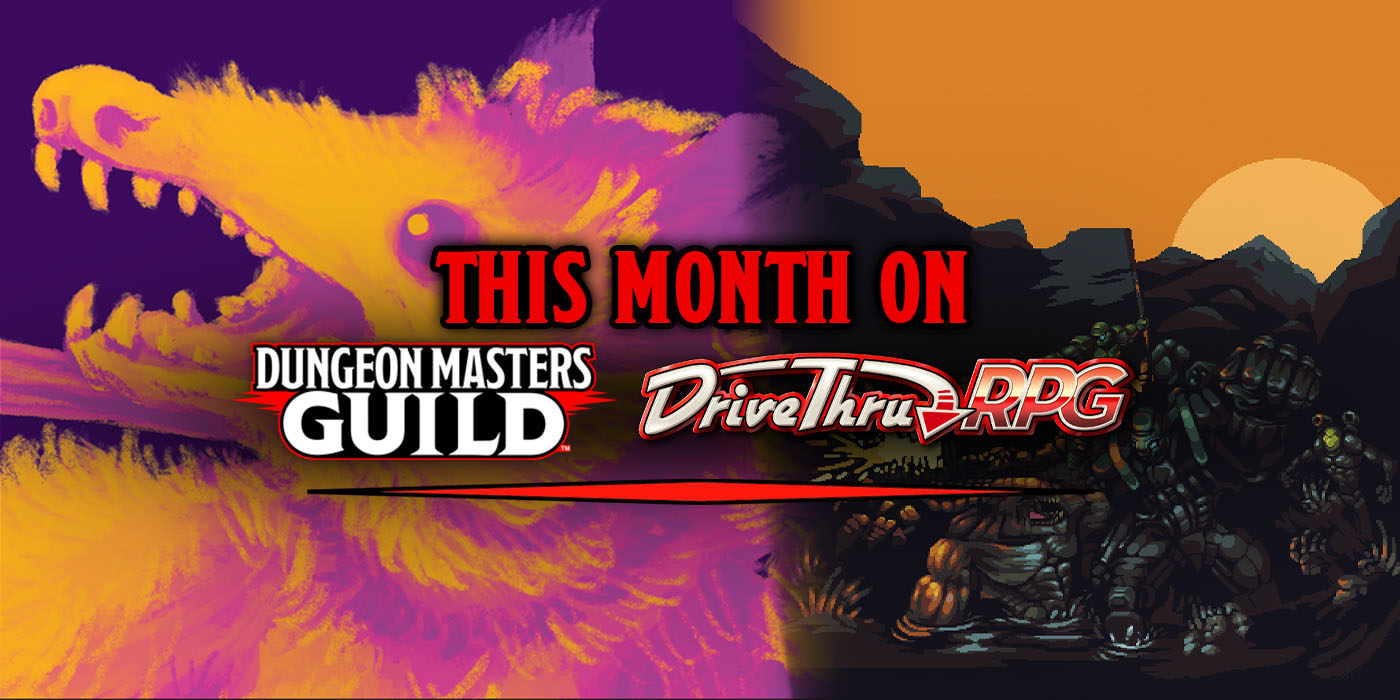 Enter a Ghibli world, search for your missing friend via text message, and play as one poorly behaved goose this month on DriveThru RPG and DM’s Guild. 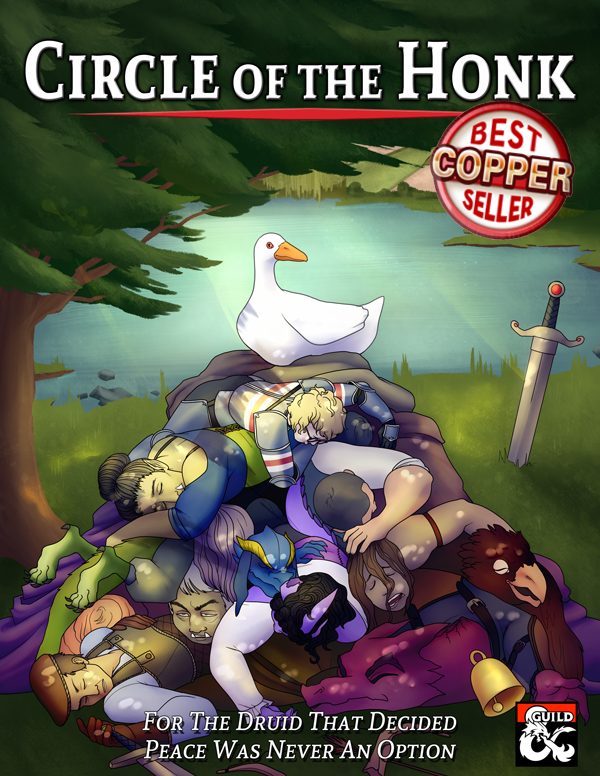 It’s a druid subclass. Where you can Wild Shape into a troublesome goose! Become the ghostly Poltergoose or the Golden Dragoose, but the DM may come armed with the Gooseflayer or Begander to give you a run for your money… or bread, or whatever you have. This homebrew subclass looks like a ton of fun and is just serious enough to work in a game built on story as well as a game built on forming goofs around the table with your friends. 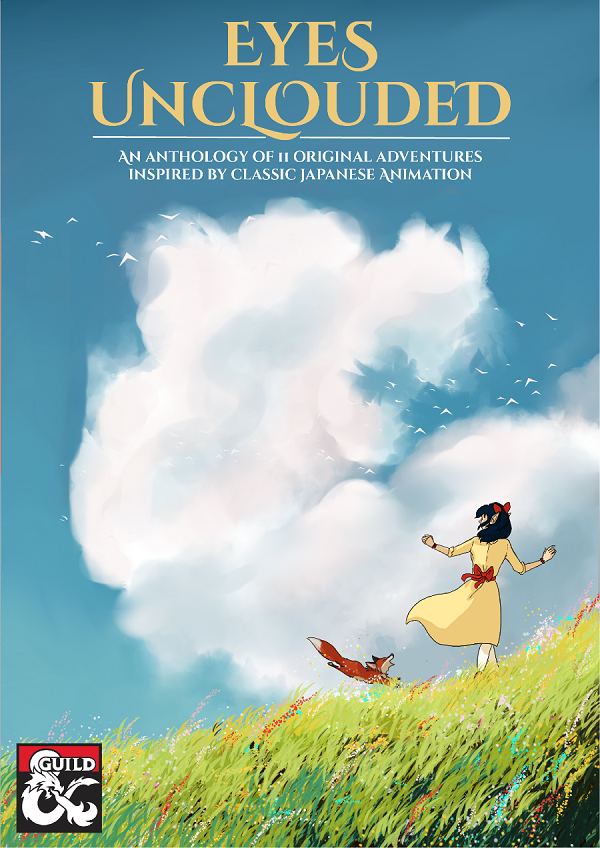 “Eyes Unclouded is an anthology of adventures for Dungeons & Dragons 5th Edition, inspired by classic Japanese animation. Entreat with the Cat King of the Feywild, learn the truth behind a curse affecting an ancient forest, race by airship to find a lost sky fortress and more!

Eyes Unclouded is a full-colour 180 page digital PDF that includes 11 original adventures for players of level 1 – 14. In addition, we’ve included 8 recipes inspired by the adventures that can be made at home. A screen reader friendly PDF is also included.”

Bring a little Ghibli into your games with Eyes Unclouded. With eleven adventures created for a wide variety of skill levels and nearly 200 pages of full color content, this is a book that will keep your players entertained for weeks and weeks to come while still feeling as magical and soothing as every Ghibli world always is. This is a fan product and in no way associated with the anime studio, but sometimes the best additions to the fandom come from the people who love it the most.

Caught At The Cross Keys 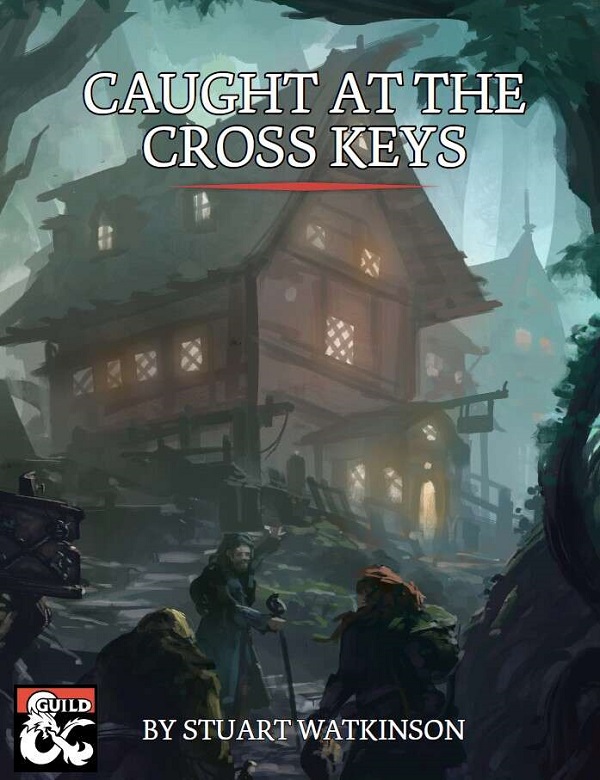 Emerson Frostfield has been Kidnapped!

The young, wealthy, and extremely obnoxious noble has been talking very loudly about the money his family has. The party will have to head to the Cross Keys Inn on the High Road south of Neverwinter and bring him back unharmed.

However, The Cross Keys attracts many folks all with their own agendas… Crazed drunken goliaths, street gangs, thugs, and adventurers from all over Faerun are all thrown in to make for one wild night at the Inn!

This adventure gives players the option to be the heroes and save the day or play another group of bandits looking to capitalize on the work of others!

Whether you’re in the sort of group that likes to save the day and do the right thing, or a roaming band of jerks, this game has a path for you to follow. Do your players want to save the obnoxious loud noble? Would they prefer to liberate him of his wealth themselves? Or instead will they sit back and let the other shady figures do the hard work and ride those coattails to wealth? This module comes with magic items, NPCs, and all of the maps you’ll need to play through this night of questionable morals.

Valentine: This Is Not A Love Story 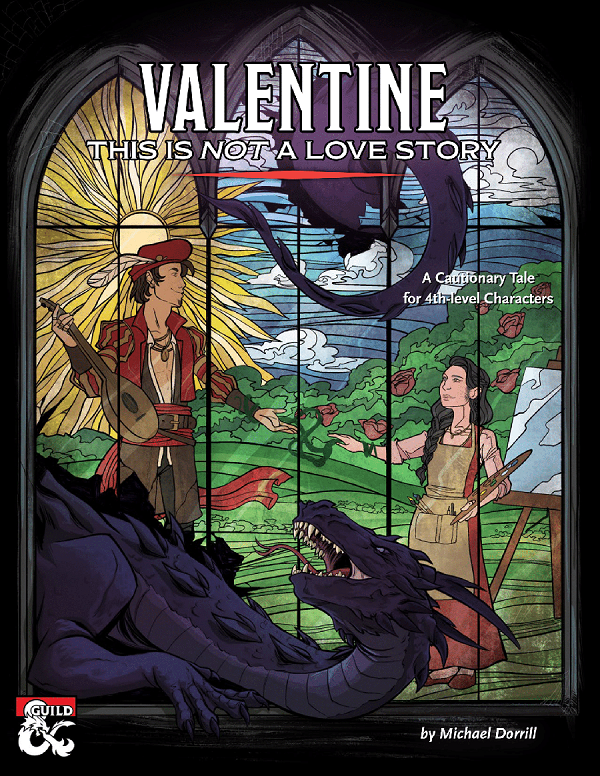 “In the city of Waterdeep, a bronze dragon named Brytyss has fallen in love with Valentin Miller, a young Dwarven woman. Anxious about his lover’s mortality, Brytyss sought the wisdom of the silver dragon Mirvi. Mirvi taught Brytyss an ancient draconic ritual to transform Valentin, prolonging her life so that the lovers may spend all of it together. But the ritual is not all that it seems. Those who undergo it find themselves changed in ways they did not anticipate, bound to magic they did not understand, and destined for heartbreak. There is a cost to eternal life that may not be worth the reward.

In this cautionary tale for 4th-level characters

Content Warning: Valentine: This is Not a Love Story critically examines, and allows players to confront, unhealthy and abusive relationships. Take care to make sure that your players will be comfortable with this content before playing Valentine.”

Tabletop games have always been an interesting and sometimes helpful way to unpack, approach, and explore, some difficult subjects, and Valentine aims create a safe (but fun) space to do just that. Unhealthy relationships are a part of life that we don’t often discuss, but at the table with friends, using dragons and dwarves instead of real people and involving high speed cart chases, this discussion can turn into an adventure that we are able to laugh through. And if you don’t personally have any baggage attached to any aspect of this game, it honestly looks like a really enjoyable story with an exciting and perhaps hilarious scenes.

See You In Hell 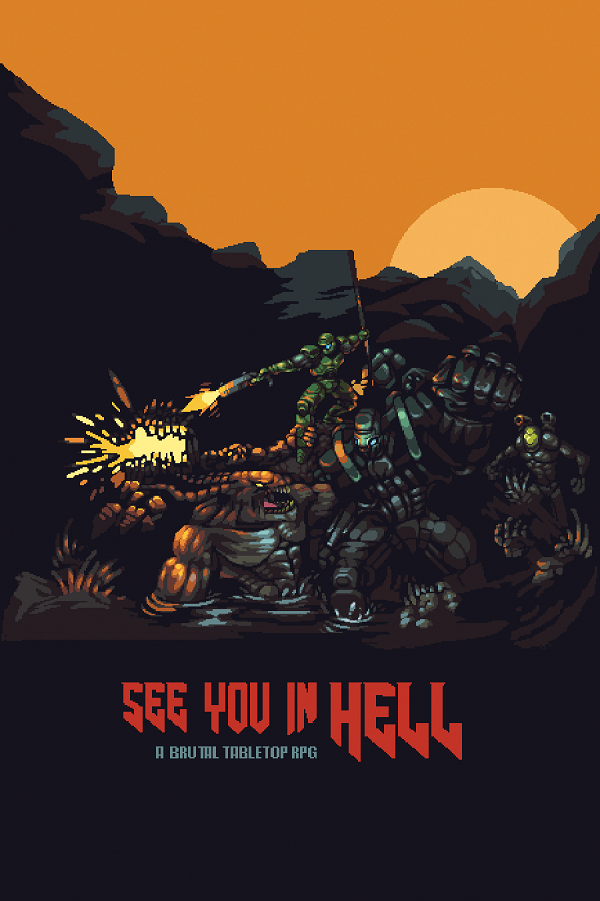 “A brutal tabletop RPG about tough heroes, who stop an infernal invasion.

Using these rules, you and your friends can tell an adventurous story about the near future full of explosions and shooting, which lasts for about two or three hours without any preparation. It will resemble brutal first-person shooter video games. The game ends with an epic boss fight. The heroes either bring the villain down or go straight into the cauldrons of the Dimension-66 yourselves.”

Everything from the game design and flow to the art is meant to look like a pixel video game from the 90s, and if your interests collide at side scrolling adventure games culminating in an epic boss battle and tabletop RPGs, this game may be the perfect way to spend an afternoon with some friends. See you In Hell is a low to no preparation required game meant to last only a few hours but feel like that first person shooter that you poured more than a full 24 hour day into. 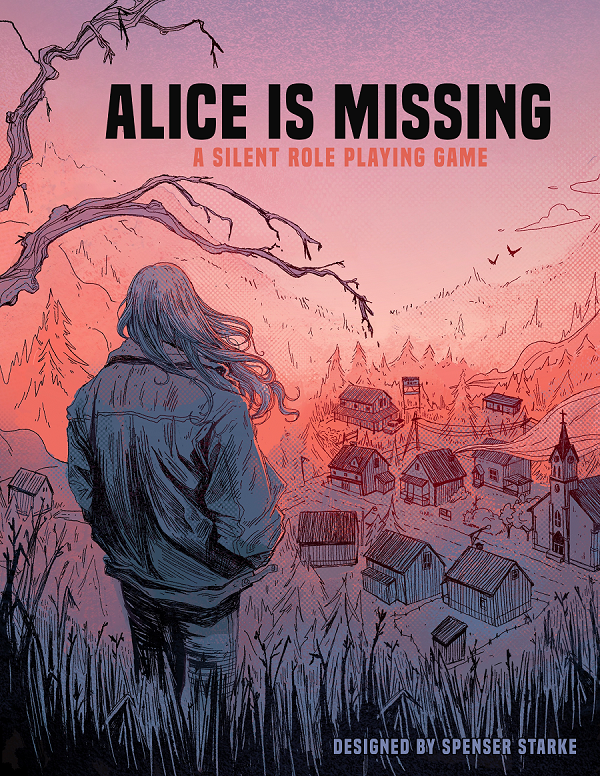 “From the creative mind behind Icarus: A Storytelling Game About How Great Civilizations Fall, comes Spenser Starke’s next project Alice is Missing, a silent role-playing game about the disappearance of Alice Briarwood, a high school junior in the small town of Silent Falls.

The game is played live and without verbal communication. Players inhabit their character for the entirety of the 90-minute play session, and instead of speaking, send text messages back and forth to the other characters in a group chat, as well as individually, as though they aren’t in the same place together.

Haunting beautiful, deeply personal, and highly innovative Alice is Missing puts a strong focus on the emotional engagement between players, immersing them in a tense, dramatic mystery that unfolds organically through the text messages they send to one another. Right at home with games like Life Is Strange, Gone Home, Oxenfree, and Firewatch, it’s designed to feel as much like an event-style experience as it does a role-playing game.”

This game is no stranger to BoLS, but was added to the DriveThruRPG catalog recently for your convenience. Alice is Missing is a revolutionary and truly unique game about finding your lost friend and doing so quietly. Players communicate exclusively via text message, making this a perfect game for maintaining those 6+ feet of distance. Putting a strong focus on emotional engagement between players and creative communication solutions, Alice is Missing let’s you unravel a tense mystery in a way that is almost immersive. 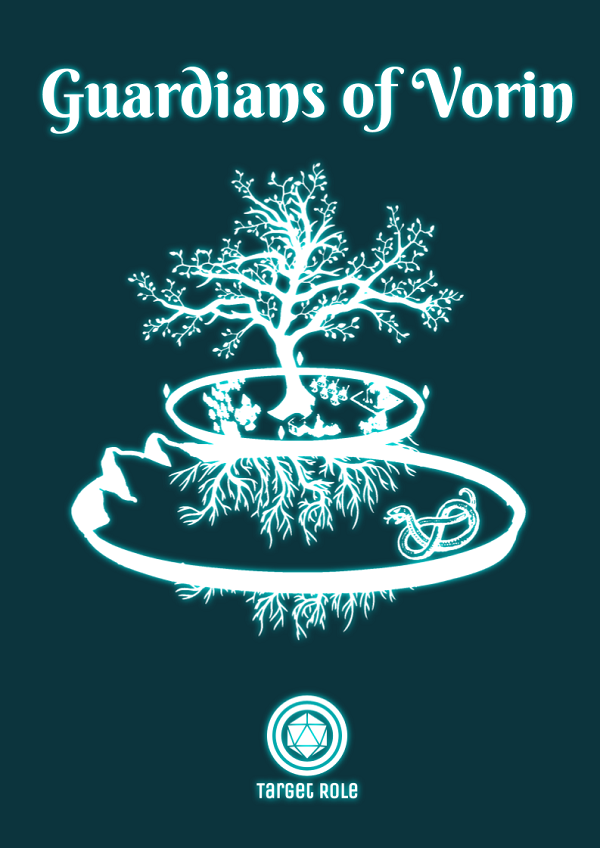 “Vorin is a one page scenario, which means it’s a world built to be used for Role-Playing Games (RPG) written in one single page. To play you’ll need to choose a high-fantasy RPG system, one player to be the Game Master (GM) and 2 to 5 players to play the roles of the characters, known as the Playable Characters (PC).

The tree’s magical fruits are enough to empower a single being beyond the limits of existence itself and for this reason they are guarded very strictly but maybe this power is close to be endangered.”

This is a short concept that can be added to any fantasy game, letting you add a magic life tree to any world or location. This flexible addition to your lore and worldbuilding maxes out at one page and $0.50, making it one of the most reasonable and low commitment piece of homebrew you could ever add to your game. This kind of life tree has been seen throughout mythologies, but how to form it into something that will work in a fantasy RPG setting? Now you have that answer. 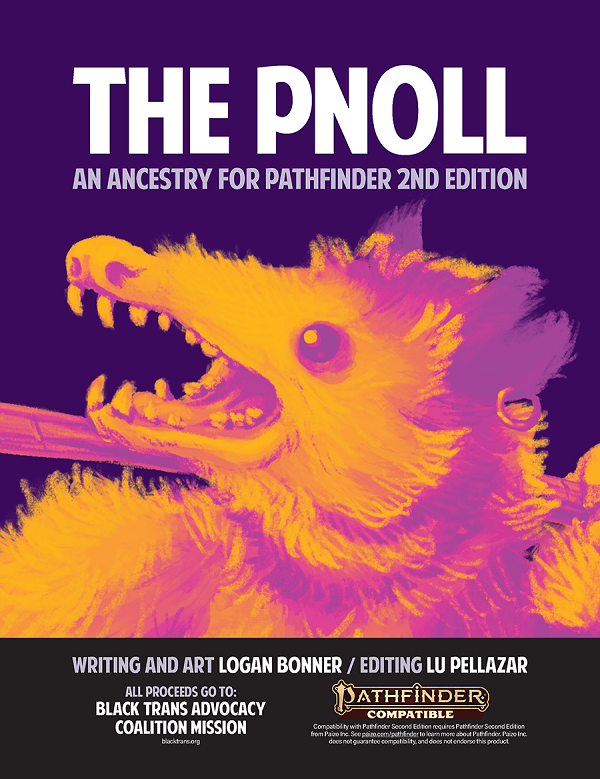 “Eat trash with pride as you play a gross-but-lovable pnoll! This product is a fully illustrated, playable ancestry for Pathfinder 2nd Edition, complete with heritages like the trashtooth pnoll and ancestry feats like Garbage Fire and Play Dead.

All proceeds for this product go to Black Trans Advocacy Coalition Mission. Thank you for contributing to this great cause!”

I just really like possums, so any way to incorporate them into my tabletop RPG experience is going to be a slam dunk in my book. Are weird gross marsupials also your jam? Do you want more creative character options as you adventure and explore? Do you want to contribute to a great cause? You can do all of that with the Pnoll.

Have you gotten any new RPG books or supplements this month? Are any of my picks making your shopping list? Let us know in the comments!