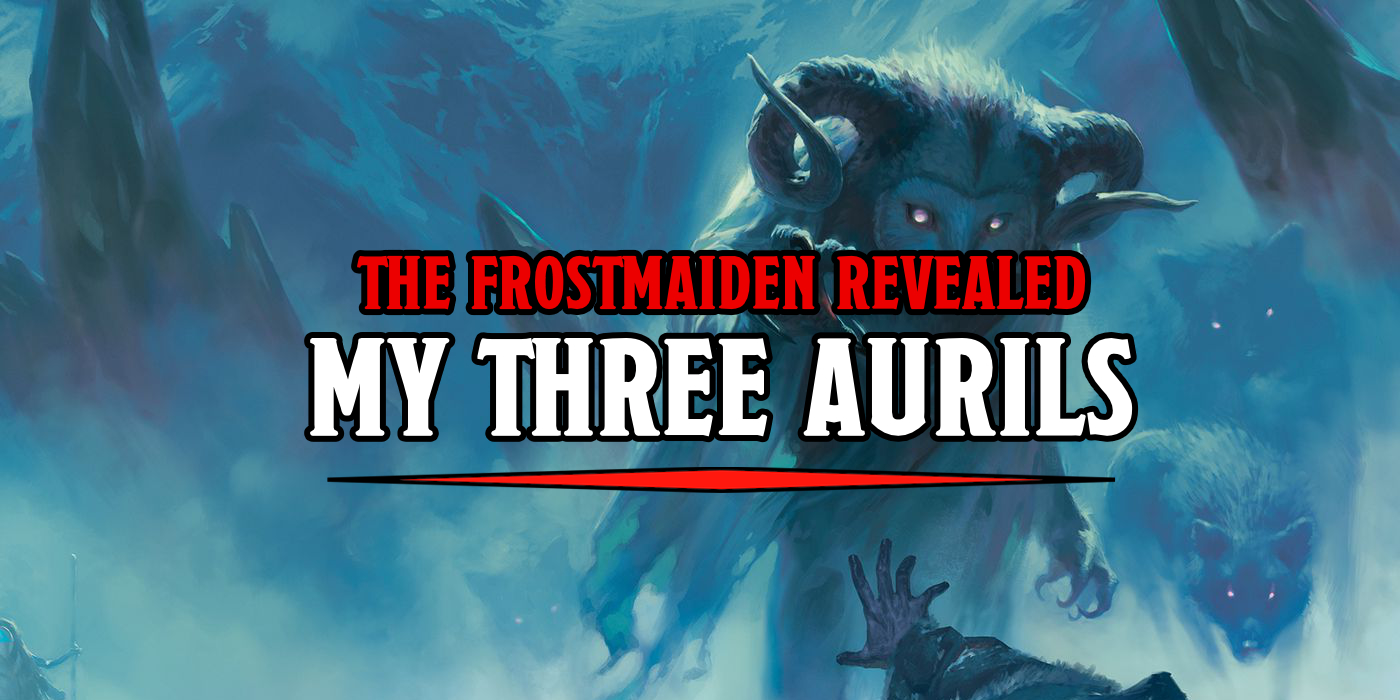 How is a goddess only CR 9? Come and take a look at Auril, the Frostmaiden, as she appears in the upcoming D&D Adventure.

In Icewind Dale: Rime of the Frostmaiden, players will end up facing down the titular goddess at least once–how that encounter goes down depends on many factors, but the long and the short of it is, in this adventure, depending on your choices, you might end up fighting a god. Admittedly a lesser god, but a god none the less. And in Frostmaiden’s recent spoiler reveals, we got a look at what Auril does, courtesy of the Gaming Gang.

One of the best things about this encounter is that WotC loosely outlines how deities work in the game. And true to 5th Edition, the gods play by the rules right up until they don’t. When you encounter Auril, who only clocks in at CR 9, you’re facing her in a weakened state. But even that weakened state is pretty powerful, here’s a look at some of her stats: 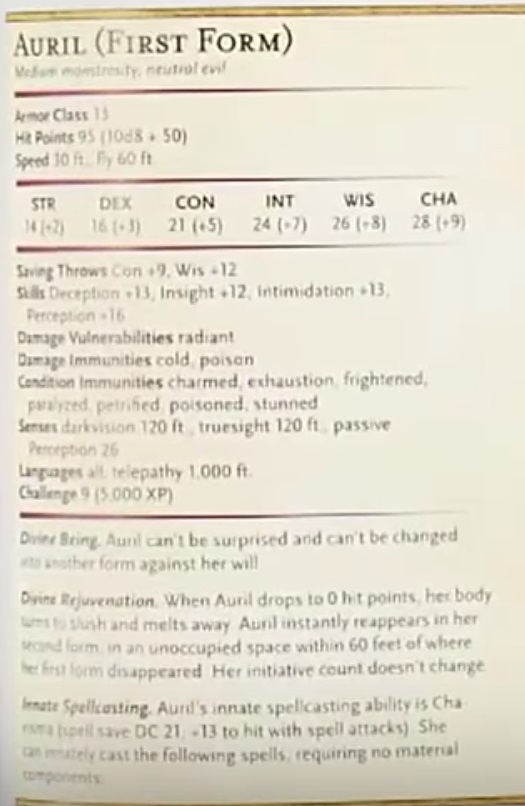 While we’re not showing the whole stat block, one thing to note is that, as a Divine Being, Auril can never be surprised to transformed against her will. It’s good to be a god. We also see that Auril makes good use of the Mythic Monster rules introduced in Theros, with not one but three different forms that she assumes when dropped to 0 hit points. After you defeat her monstrous form pictured above, she transforms into the Brittle Maiden:

And gains more hit points, along with some new abilities.

If you manage to defeat both forms, which takes a total of 231 damage, you get to face her final form, the Winter’s Womb, which has powerful magical ranged attacks and another full round of 136 hit points. 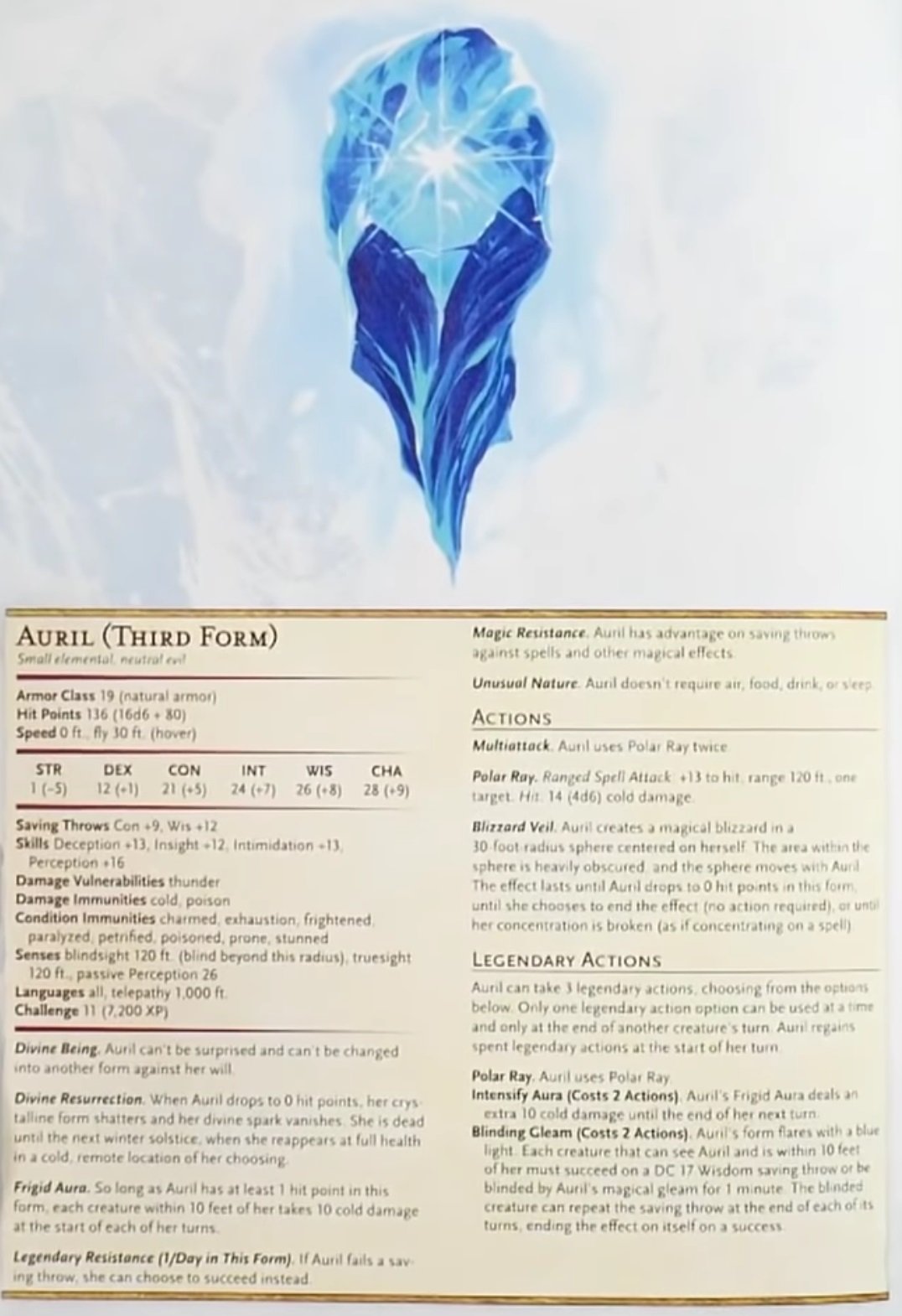 Another thing worth noting is that gods can’t be killed permanently in the Forgotten Realms, at least not through the traditional means. 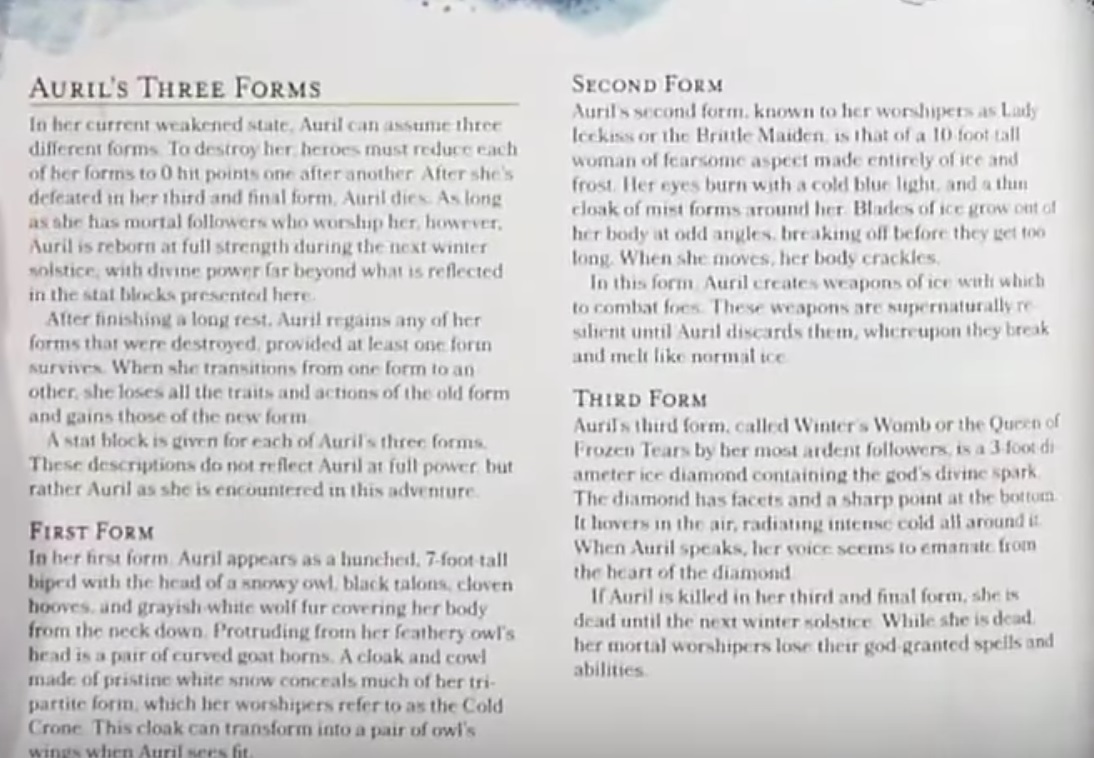 Slay Auril and you’ve only banished her physical presence from Faerun for a time. Auril is a tough fight, though. And given that you face her when you’re 7th level, you could be in for an everyone dies situation, but I love the way that this plays out. Auril is here, and again, not at full power, she’s been weakened for narrative reasons, but she pops back at full strength next Winter solstice.

So that’s what fighting a god looks like if you’re not level 20. What do you think?