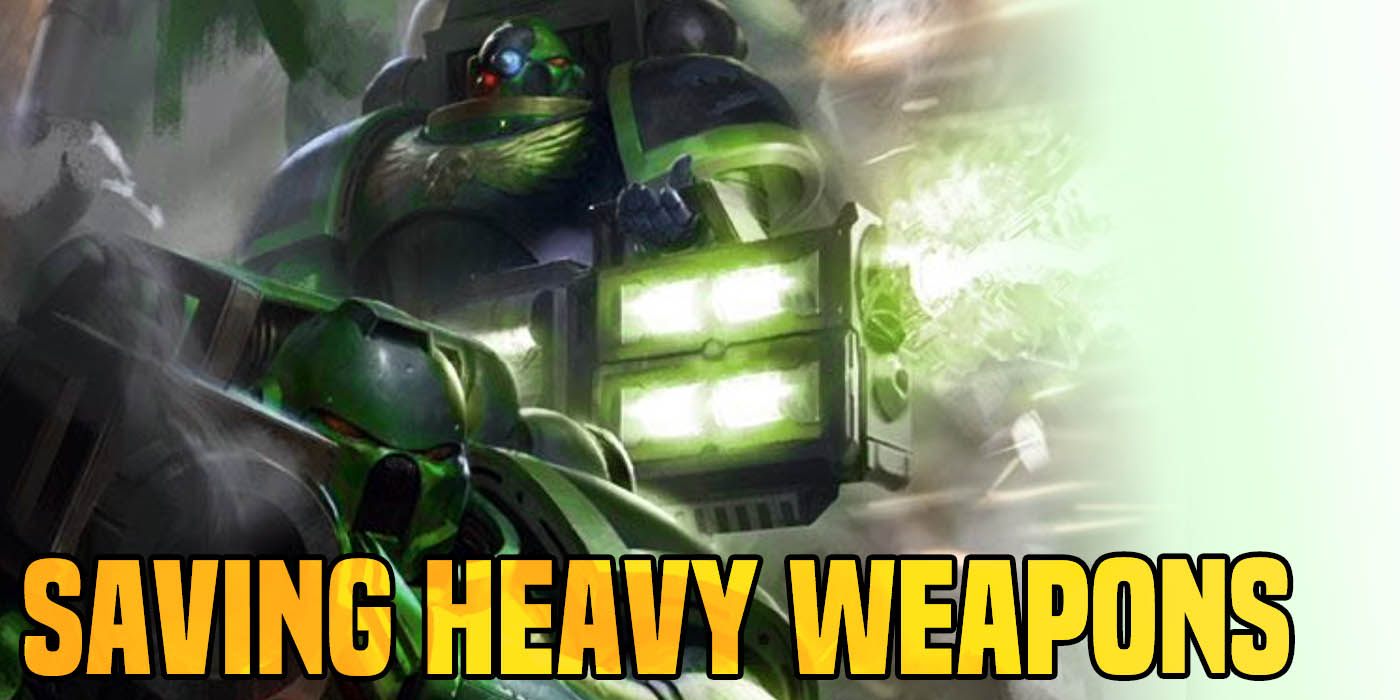 Goatboy here, thinking about what other weapons need a “multi-melta” style upgrade to matter in 9th Edition.

I waxed a bit on how upping the Heavy Bolter to damage 2 was a very interesting bit of design that seems to fix the weapon where the thoughts in the past – increasing shots, changing type, etc – would have not fixed the weapon.  This has me thinking about other weapons that most likely need this type of design to happen and how we can change these things to help validate some of the old standbys of the edition.

The first gun I think needs a serious overhaul is the Lascannon.  Here is a weapon that is a poster child of the old ways of 40k.  The super laser death gun that would burn through armor, reduce a tank to scrape, and just be an awesome force of destruction.  Now it is left costing too much, not doing enough damage, and sadly not even killing the things it was designed to do.  This fits for all these death laser type of guns that we have out there – the Eldar and Dark Eldar laser beams of death that just don’t do a whole lot now.  This leads me to wondering if we just change its damage profile could we fix that gun?

D6+3? The first thought would be to set up a minimum damage we could have for the gun.  This could range from a flat +3 to a d6 giving us a range of 4 to 9 damage.  More than enough to melt some of the smaller tanks in the game and still be feared when hitting something like a Custodes or a Daemon Prince in their no no place.  The gun is so expensive that we have to really look at pushing it above the 6 damage range in order to help keep it useful when you start to look at the Melta Weapons and how they are changing.  Would this min 4 damage be too much?

3D3? In some ways maybe – I still think we need to find some way for the 4 wound things we have out there to take a Lascannon shot to the face and still survive.  It makes me think moving to something like a 3d3 set of damage means we lower the min amount of damage by 1 but still keep the upper range of 8 damage.  It also means we have more ability to keep the threat of chance locked in so players are not always guaranteed X damage.  It also brings in a new set of damage rolls that could be fun and interesting to the table top for other – bigger laser like guns.

The other thought I had on this – beyond just minimum damage is to look at some of the other characters from other armies that could add to this type of weapon.  I think the Death Guard have a few weapons that the damage doesn’t just “go away” when 1 model is pulled.  You could think of it as the Laser cannon burning thru one guy and still going thru to the next.  It is one of the things I like about AoS in that damage just doesn’t magically go away when a model is pulled.  If we had death laser beams that when rolling high for their flat d6 do more than just kill a single guy it becomes a lot more interesting to bring those weapons to the table top.

What other weapons could we change the Damage characteristic and maybe fix them?  I think the Autocannon and Autocannon type weapons are in a bad place.  They cost more than a Heavy bolter – and now they wound the same as them and do the same sort of damage with the Heavy bolter having a chance to do more.  Also as the Heavy Bolter has a Bolter style profile – some of upcoming Strats and army rules will most likely work better for them.  So this begs the question – what do we do with the Autocannon?   Do we leave it with a flat 2 or move it to 3 damage?  Do we add more shots in there and increase the cost a bit?  I get the feeling we move the damage up to 3 as it will still statically kill one new marine per hit just like the Heavy bolter – but now it can do more damage to a vehicle like its profile seems to be set up as.  It also means that a set of Autocannons are actually a threat to a flyer.

What other weapons do you feel could use an update?  I know a lot of Chaos stuff could use a tweak (what is the point of a Reaper Autocannon?) but there is a ton of other weapons that can easily get tweaked – especially with the upcoming push to more 2 wound models on the table top.  Of course if all these weapons get more damage output could it mean the 2 wound update actually be worse for the army than before due to the point increase that comes with being “tougher”?  Time will tell as we get these updates in within the next 2 months.

I think I would really just like Heavy Weapons to get updated in general.  These guns are supposed to be listed as a certain death if your unit gets hit by it but now they just don’t feel nearly as worth it.  The better option most of the time is just to have more shots to cause more chances for wounding, damage potential, and opponents failure of their save.  I remember when we first got 8th edition and Plasma was king – until all the extra rules came in and overwhelming your opponent with the power of Math wins you the game.

Heck this isn’t even looking at how we should update some of the Close Combat weapons we have out there.  I think moving away from a random set of damage would be a better thing for all options.  We see some of that with Flat 2 for Powerfists and flat 4 for the upcoming rain of hammers reaching our shores.  I think a bigger shift in power weapons with things like Power Mauls causing more damage but less negative to your ap – or even how a Power Axe should be a devastating weapon to face.  Overall I thought most of the close combat stuff felt right with the update to Chainswords finally getting things in the right direction for the “weapon” of 40k.

I hope everyone has a great Labor Day off as I deal with my kids.  I already knocked out some toilet repair and I am looking forward to mowing the lawn whenever it dries out enough.  Oh and finishing a lot of piled up illustration.