Geekery: Enjoy These Off the Beaten Path Scares for Halloween 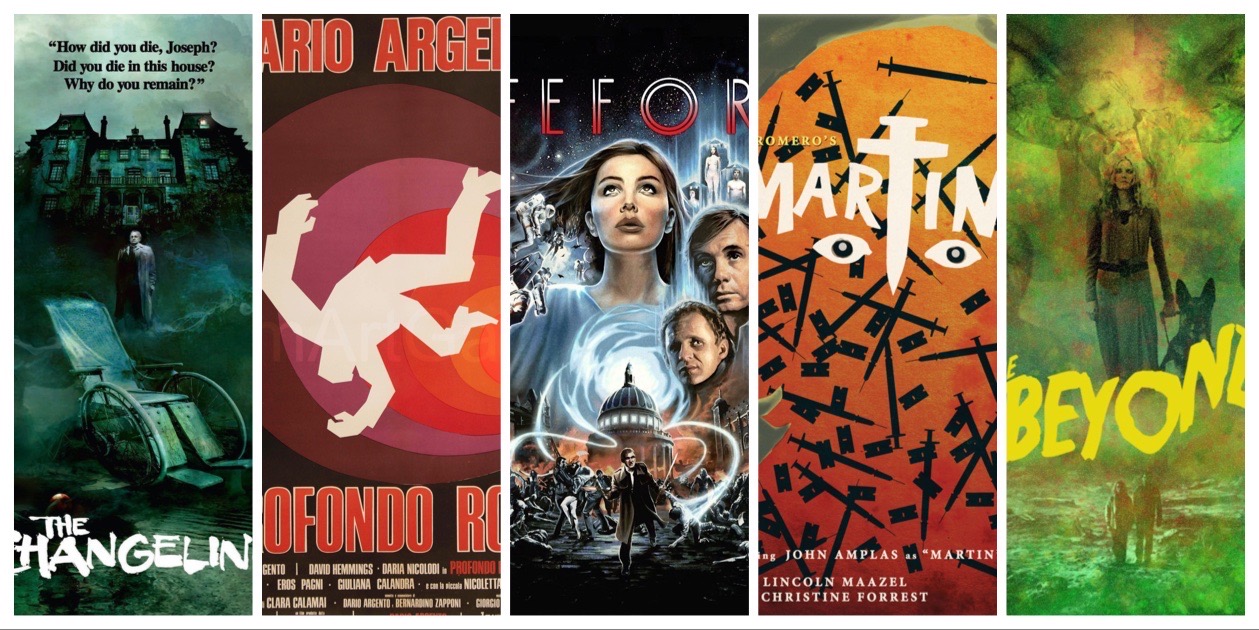 This Halloween weekend make some popcorn, settle in on your couch, and stream some new spine tingling movies.

My favorite era of horror is back when blood looked like tempera paint and special effects pushed the possibilities of makeup and animatronics rather than digital technology. It’s a time that saw Hammer’s decline and the start of some of the largest franchises – Halloween, Friday the 13th, Alien, Nightmare on Elm Street. These are not those movies.

This list has cutting edge effects, great performances, stories that pushed boundaries, and some scenes that will definitely raise the hair on your arms – maybe not all of those things at once, mind you. Even though they’re not really well known, they influenced the decades of movies that came after them.

Deep Red – Dario Argento (1975)
A psychic medium is brutally murdered, and musician Marcus Daly feels a need to solve the case, since he was the one who discovered the body. Working with him is reporter Gianna Brezzi, who hopes for a big scoop by solving the case. When one of Marcus’s own friends ends up murdered at the hands of the same killer, the resourceful pair realize they must work fast to uncover the murderer’s identity or they might serve as the maniac’s next victims.

Lifeforce – Tobe Hooper (1985)
When a space mission involving American and British astronauts encounters an alien craft, the humanoids within are brought aboard the shuttle. Back on Earth, one of the extraterrestrials, who appears to be a gorgeous woman, proceeds to suck the life force out of various Londoners, turning the town into a city of roaming half-dead people. When Tom Carlsen, a surviving astronaut, realizes what is happening, he sets out to stop the ruthless alien presence.

Posession – Andrzej Zulawski (1981)
After Anna reveals to her husband, Mark (Sam Niell), that she is having an affair, she leaves him and their son. Mark is devastated and seeks out Heinrich, the man who cuckolded him, only to receive a beating. After a series of violent confrontations between Mark and Anna, Mark hires a private investigator to follow her. Anna descends into madness, and it’s soon clear that she is hiding a much bigger secret — one that is both inexplicable and shocking.

The Blood on Satan’s Claw – Piers Haggard (1971)
When a mysterious corpse is accidentally dug up by a boy in a small town, a group of local teens starts acting very strangely. The adolescents, led by a girl named Angel, are convinced the corpse was once possessed. Hoping to get in touch with the devil through the body, the teens act out a series of demonic rituals that causes a stir among the townspeople. When word of the satanic activity spreads, certain parents start trying to lock up the kids behind the spooky stunts.

The Changling – Peter Medak (1980)
Composer John Russell is vacationing with his family when a car accident kills his wife and daughter. Distraught with grief, Russell leaves his home in New York City for a giant, secluded house near Seattle. Soon Russell starts to feel the presence of a ghost, a boy who drowned in the bathtub there. Russell seeks the assistance of Claire Norman, who led him to the house initially, in uncovering the secrets of the boy’s death.

Santa Sangre – Alejandro Jodorowsky (1989)
In Mexico, the traumatized son of a knife-thrower and a trapeze artist escapes from a mental hospital to rejoin his armless mother – the leader of a strange religious cult – and is forced to enact brutal murders in her name as he becomes “her arms.”

Martin – George A. Romero (1977)
Young Martin is entirely convinced that he is an 84-year-old blood-sucking vampire. Without fangs or mystical powers, Martin injects women with sedatives and drinks their blood through wounds inflicted with razor blades. After moving to Braddock, Penn., to live with his superstitious uncle, who also believes Martin is a vampire, Martin tries to prey exclusively on criminals and thugs but stumbles when he falls for a housewife.

The Devil Rides Out – Terence Fisher (1968)
When the Duc de Richleau and Rex Van Ryn arrive at a fashionable party thrown by de Richleau’s protégé, Simon Aron, they soon realize that the party is in fact a gathering of a Satanic cult, led by the high priest Mocata, that plans to initiate the beautiful Tanith that night. It’s up to de Richleau and Van Ryn to defeat the devil-worshiping Mocata and save innocent young Tanith and the others from a terrible fate.

Tetsuo: The Iron Man – Shin’ya Tsukamoto (1989)
A “metal fetishist,” driven mad by the maggots wriggling in the wound he’s made to embed metal into his flesh, runs out into the night and is accidentally run down by a Japanese businessman and his girlfriend. The pair dispose of the corpse in hopes of quietly moving on with their lives. However, the businessman soon finds that he is now plagued by a vicious curse that transforms his flesh into iron.

The Beyond – Lucio Fulci (1981)
A young woman inherits an old hotel in Louisiana where, following a series of supernatural “accidents,” she learns that the building was built over one of the entrances to Hell.