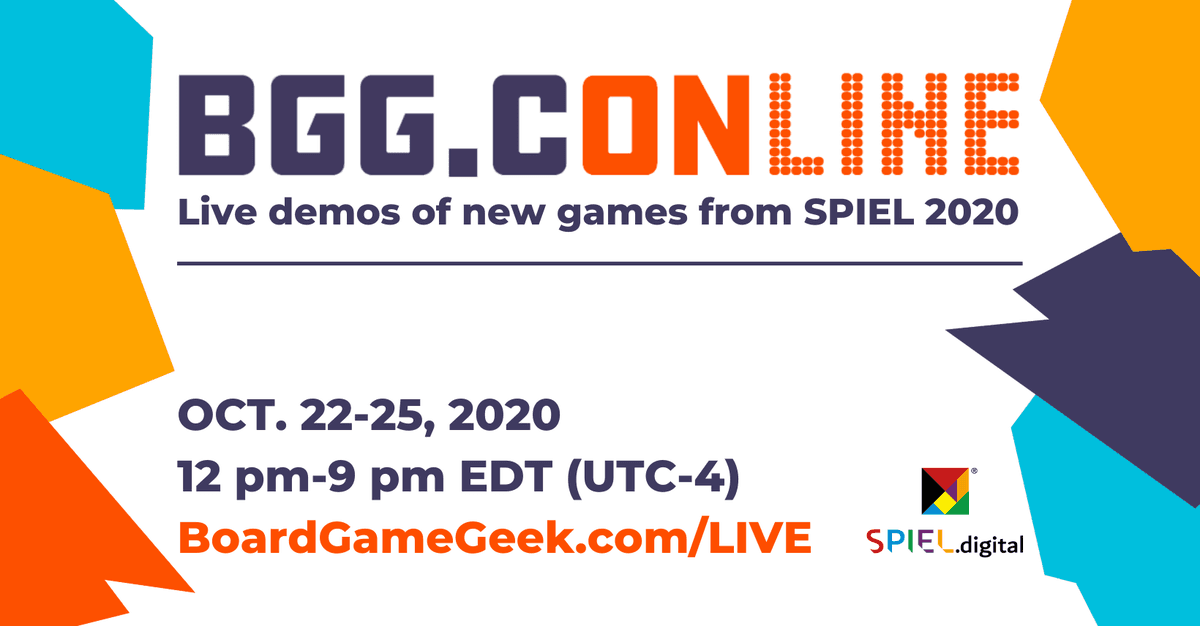 While in-person conventions are on hold, Board Game Geek game us some great coverage of tabletop games you can expect to see very soon.

Typically around this year, tabletop gamers the world over gather in Essen, Germany for a trade fair of sorts for all kinds of tabletop games. While there were plenty of online options, for this year’s SPIEL.digital convention, I spent the weekend poking my head into the Board Game Geek coverage, since I follow them on Twitch anyway. Now there are hours and hours of live-stream footage to watch and I won’t pretend to have watched all of it. I’m very busy watching through all of She-Ra: Princesses of Power on Netflix. 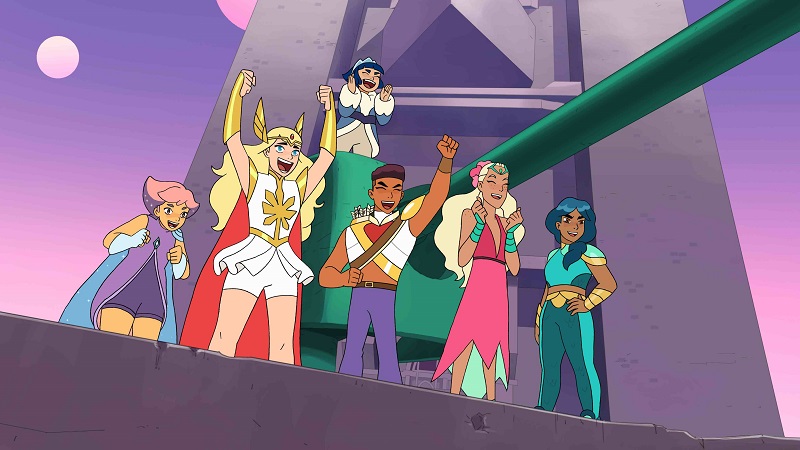 I was skeptical, but it’s, for real, very good.

However, I did pull myself away from the wonderful character arc that Catra is currently going through to find just a few standout games that were covered. If you are so inclined to flip through the list yourself, you can find their schedule here. 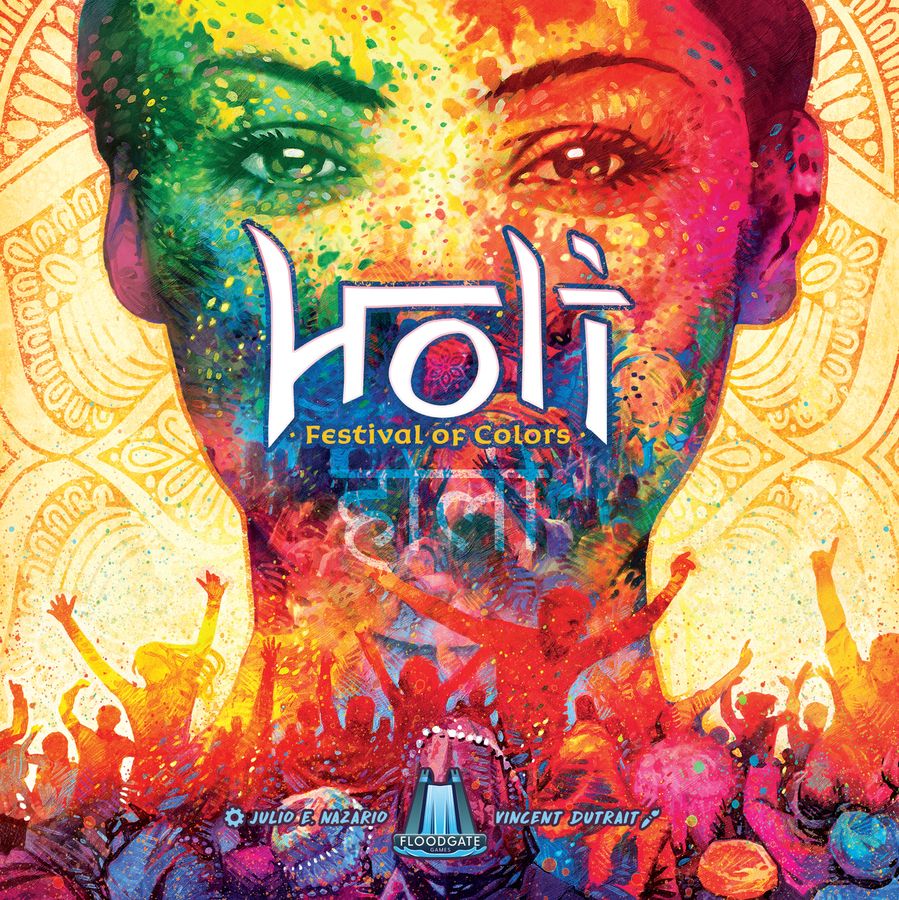 I don’t count myself as incredibly worldly, or anything, but I do find the holidays and celebrations of other countries and cultures really interesting and the Hindu festival of Holi is very high on the list of “Super Cool Holidays and Festivals”, right up there with Purim and the Boryeong Mud Festival. 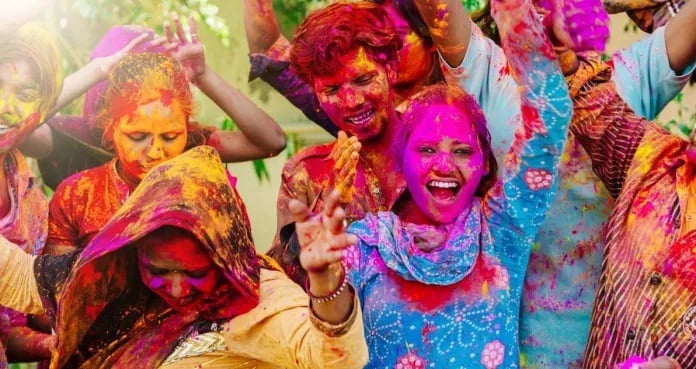 Holi: Festival of Colors is a competitive area control game with some hand management mechanics and played on a 3D board. The goal of each player is to earn the most points. Points are earned primarily through spreading your colored powder around the board as well as on to players. 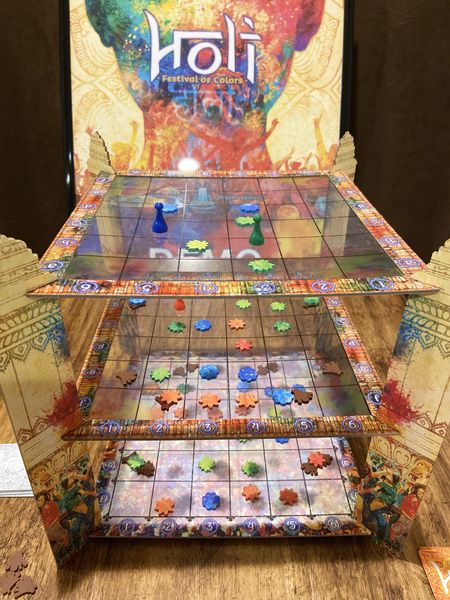 Each player spends their turn, moving around the board, throwing their powder on the board by playing a card in their hand, which will show a specific pattern of where the tokens will be placed on the board. Hitting another player with powder directly will allow you to place 2 of your tokens into their supply. If a player ever moves onto another player’s token, they collect 1 of that player’s tokens. You want your tokens in the supply of the other players since that is how you score points.

Holi is a really interesting spin on an area-control game. It’s not about war or battles, quite the opposite. Holi is a festival of color, rejoicing, and love. I love to see games that take a staple mechanic and look at it through a new lens. Also, it’s always great to see games made with a brand new theme. I’m tired of the same medieval fantasy theme. 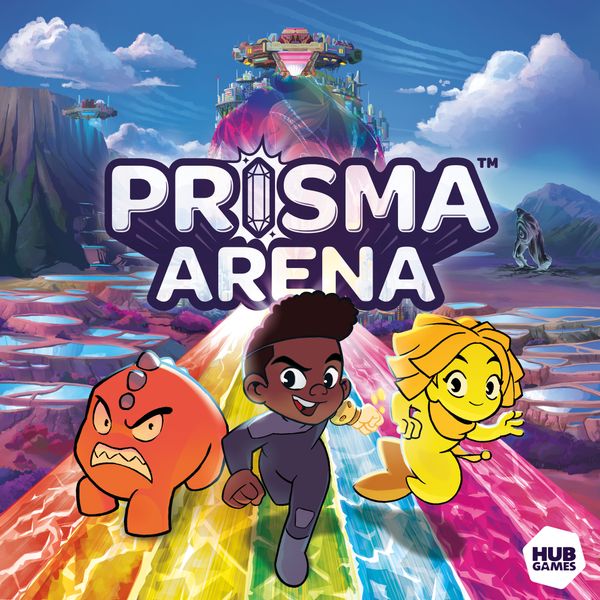 Prisma Arena may look like a kids game… because it very much is. But that doesn’t mean it should be discounted by older gamers. It has a lot of really solid core mechanics which make it a fun and interesting play, no matter your age. 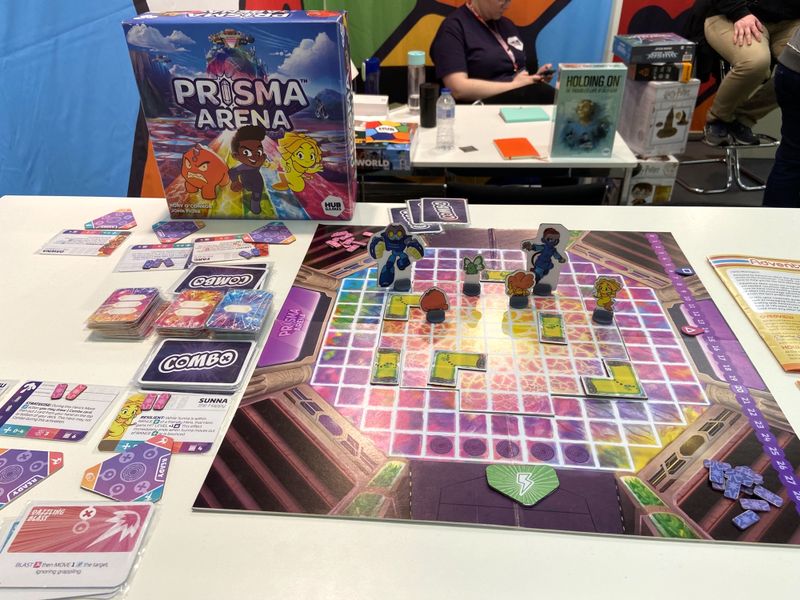 Prisma Arena is a competitive arena combat game with legacy-style player growth. Players each have stats and abilities unique to their character, as well as combo cards they can employ. Plus, each player is accompanied by a Mo’kon, which is a creature that embodies a specific emotion. This offers a ton of customization in how your character is built to start, but also how they grow as you play them more and more. Each character will gain experience and level up the more they are played, using a character sheet card to track their abilities throughout.

On top of the solid core gameplay, Prisma Arena allows players to create and customize their own characters. By using a standee and a large variety of stickers, players can create a character that is wholly their own.

The publisher had this to say about their character designs:

We believe that everyone should be able to see themselves in the games they play, and in creating our customisable characters we’re promoting inclusivity and gender-neutral standards.

There’s no link between a character’s appearance and their options for skills or abilities. This is a great step forward as we move away from those types of ideas. 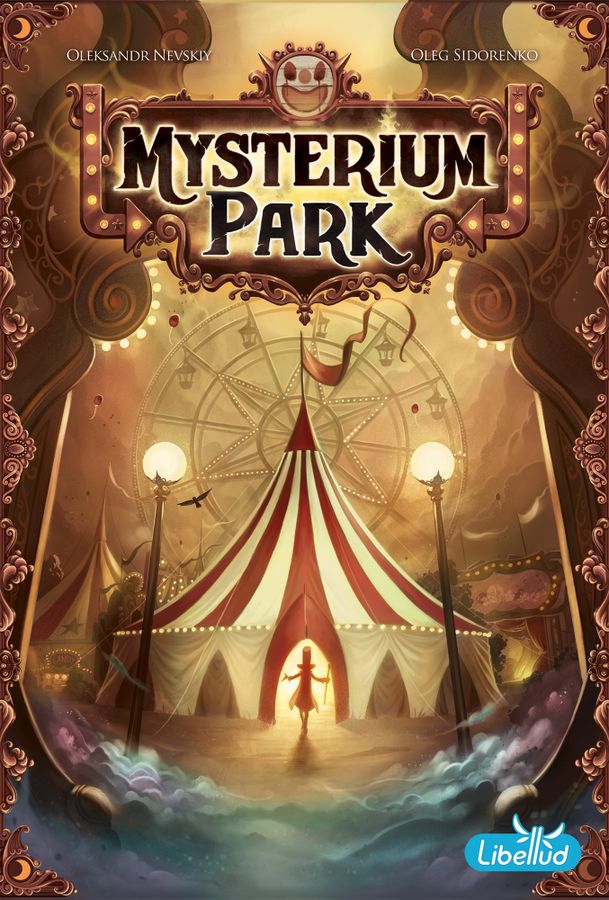 I’m a big fan of Mysterium. It’s like Pictionary but way better, which isn’t saying much. Sorry, I’m just bitter because I’m a terrible artist. But Mysterium takes that same idea and adds murder, which is always exciting. Mysterium Park is a sequel of sorts, taking the same core gameplay, but streamlining it down and making it a lot faster and easier. 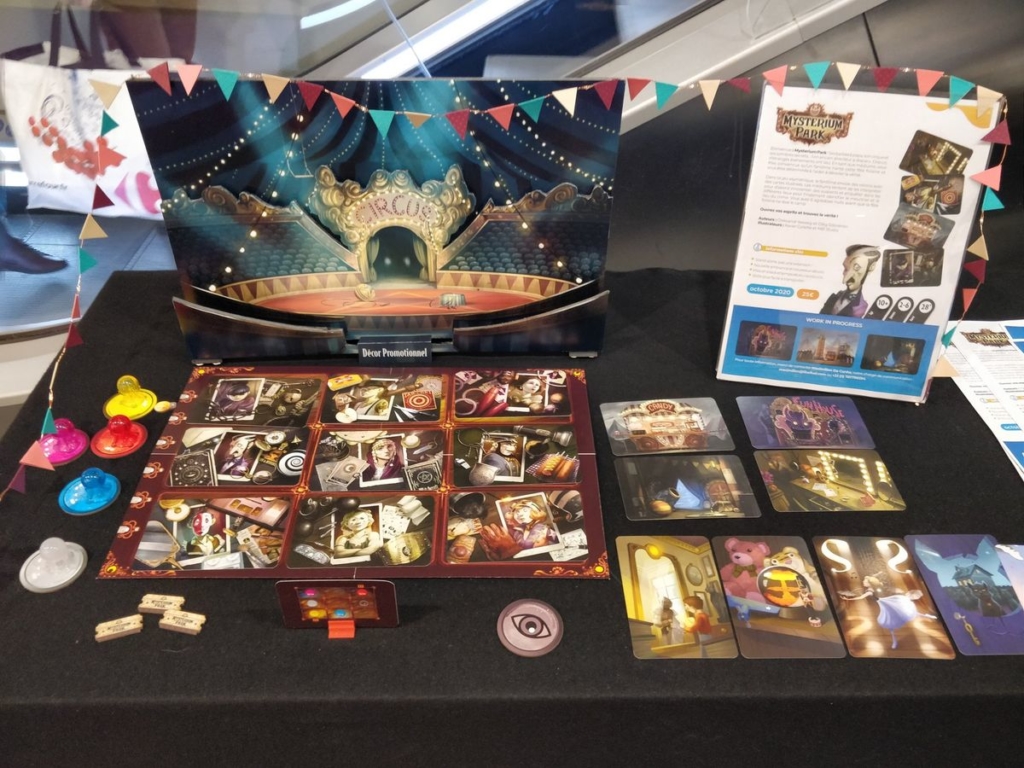 Mysterium Park follows the same idea as Mysterium. Players work together to interpret visions from a ghost of a murdered individual. The vision cards are very… weird. 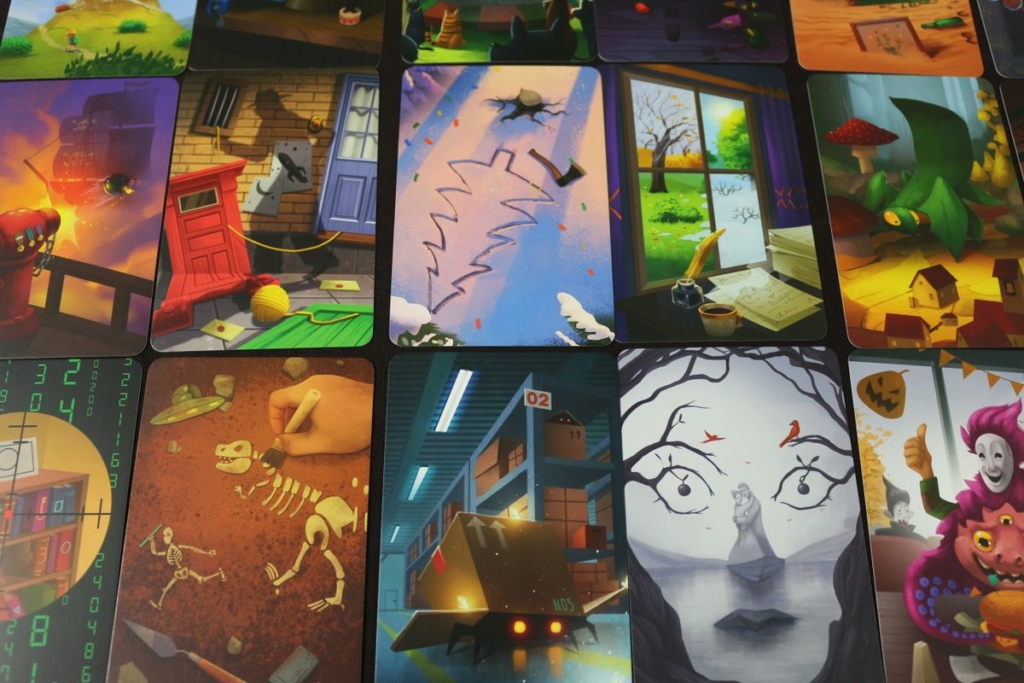 These visions lead each player towards one of the innocent 9 suspects. The suspects are arranged in a 3×3 grid, with the ghost having a small card showing which of the suspects they will be trying to point each player toward. As the players figure out the ghost’s visions they will move onto finding out the location of the murder. However, unlike in Mysterium, in Mysterium Park, each vision points towards an innocent person or uninvolved location. This leaves the last phase of the game always with 3 suspect/location combinations, no matter how many players. If the players can correctly identify the murderer, they all win!

Mysterium Park feels like what Mysterium should have been. It’s so much more streamlined and with a number of quality of life improvements which make for a better gaming experience overall. If you’ve played Mysterium but don’t yet own it, I highly recommend picking up Mysterium Park instead. Plus, I’ll take a creepy circus over a spooky mansion anyway.

This was only a very small selection of games I got to catch a glimpse of during the whole SPIEL.digital coverage. I was delighted to see a lot of new themes and mechanics in games and a much wider array of representation.

Overall, I had a good time and I’m sure I’ll find my way through the whole live-stream over the next couple of weeks. It’ll take a while, but it’ll be worth it! I’m hoping to make a list soon of all the games which really stood out to me, but long lists mean fewer details, and I like being detailed!