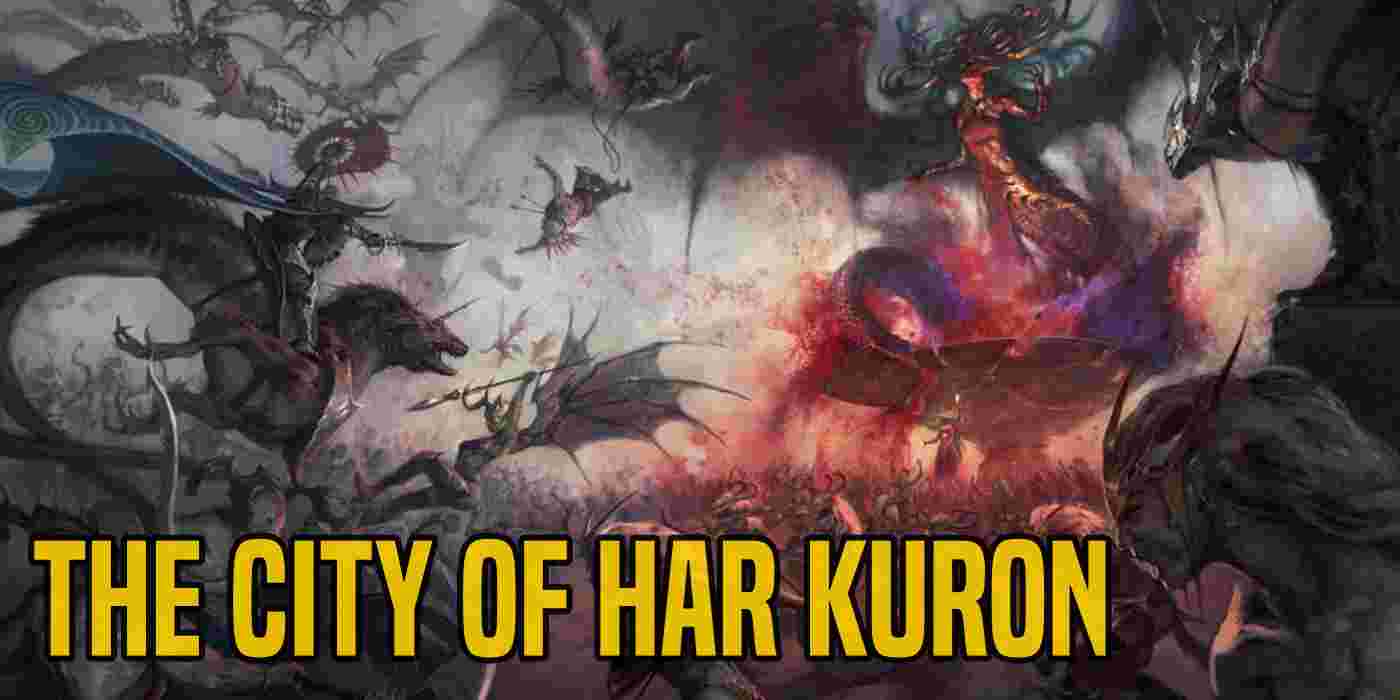 Morathi has had her claws in every facet of Order for longer than most people realize, and now that her mask is off, so are theirs. Morathi’s plots bloom!

With the events of Broken Realms: Morathi, secret sects of Dark Aelves loyal to the Shadow Queen within the Cities of Sigmar have risen up. Led by a Coven of Sorceresses, the newly forged dominion of Har Kuron combines the savage ferocity of the Daughters of Khaine with the ordered might of the Dark Elf remnants from the city of Anvilgard. The do lose some of the benefits the God-King provides, but gain prayers, spells, and artefacts befitting their new patron. Here’s my thoughts on the new subfaction, and what I think they bring to the table. 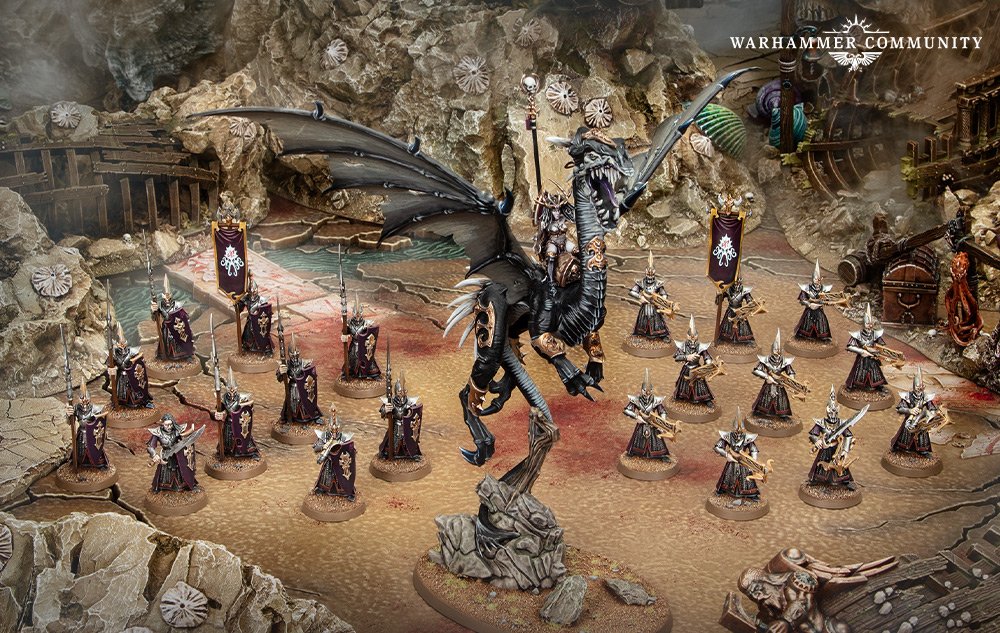 Losing out on the benefits of the Cities of Sigmar, like Stormcast or Adjutants, isn’t great, but considering that your general will likely be a Dragon-mounted Sorceress or Dreadlord, you won’t be missing out on too much. Instead of Stormcast, you have access to Daughters of Khaine units, and should you add a priest you get an additional prayer in the form of Incitement of Murder, which is the Catechism of Murder prayer from the base book in everything but name (for those who don’t know, that gives one unit exploding 6s in the combat phase).

That is a great reason to bring a Slaughter Queen on a Cauldron as your leader, but should you wish to have Drakespawn Knights as your battleline, you can also give your Dreadlord the Murderous Zeal command trait, which gives him the effect of being a priest with that prayer. If you want to feel really Druchii, you can give that command trait to a Sorceress, giving your Aelf queen the ability to pray to Khaine and then cast your dark magic across the battlefield.

You also gain access to the Make an Example of the Weak command trait, allowing you to kill a model in a nearby unit to make all units wholly within 18” of the unit you chose immune to battleshock. 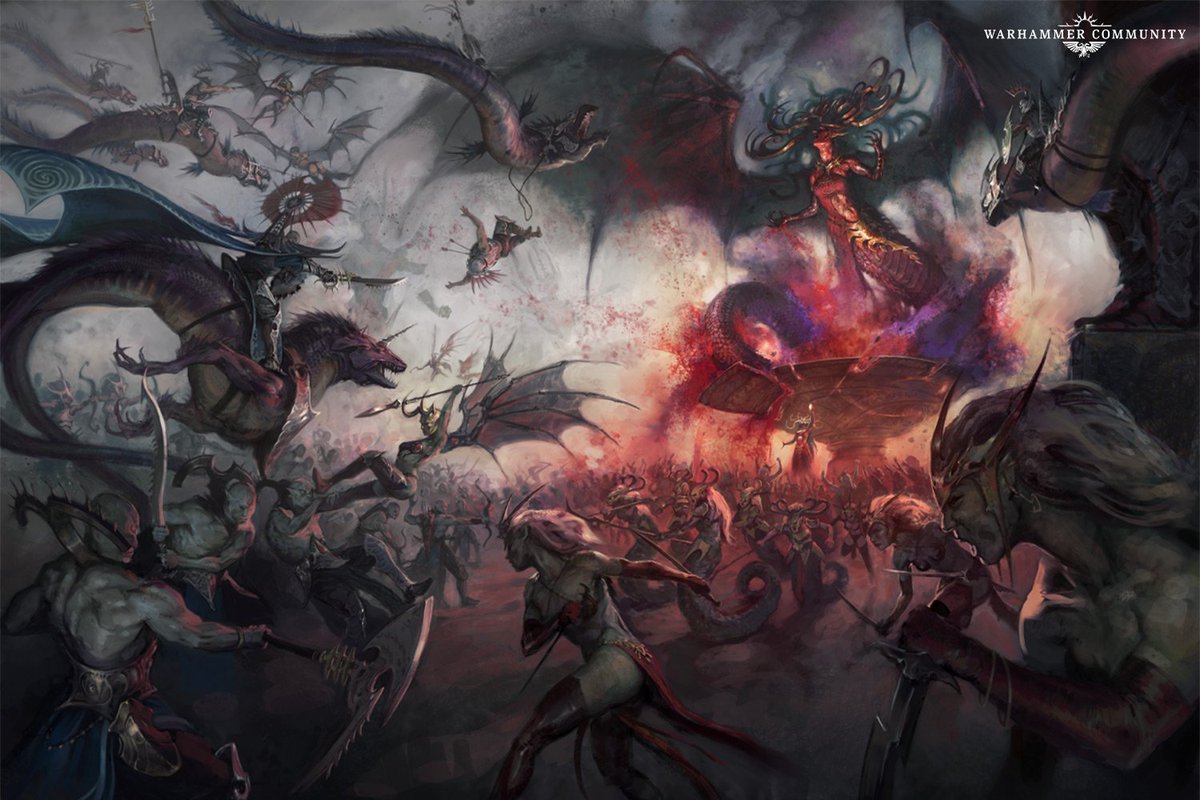 For command traits, you two pretty cool options in addition to the one mentioned above. The Bathed in Blood trait increases your wounds by 1 and gives you single wound regeneration every turn (great on a Dreadlord) and the Dark Adept makes your lord a Wizard, or allows them to cast an extra spell if they already are. Dark Adept is great on a Sorceress, especially with access to the new spell lore of Umbral Spite, which combines old school magic with the Lore of Shadow from the Daughters of Khaine tome. Vitriolic Spray in particular is a deadly choice, as it eliminates the armor of a unit within 6”.

Nothing will change the look on your opponents face faster than watching their 3+ or Ethereal unit lose all the benefit of their armor and fold before the spears and crossbows of your Druchii companions (Eltharion especially should fear this one). The artefacts are pretty fabulous as well, such as Lifetaker, a crossbow that dishes out mortal wounds in the shooting phase, or the Nullstone Vizard which lets you farm command points. Whatever you choose, you opponent will have to stay on their toes to face the army that has been years in the planning.

Will you be using Har Kuron?