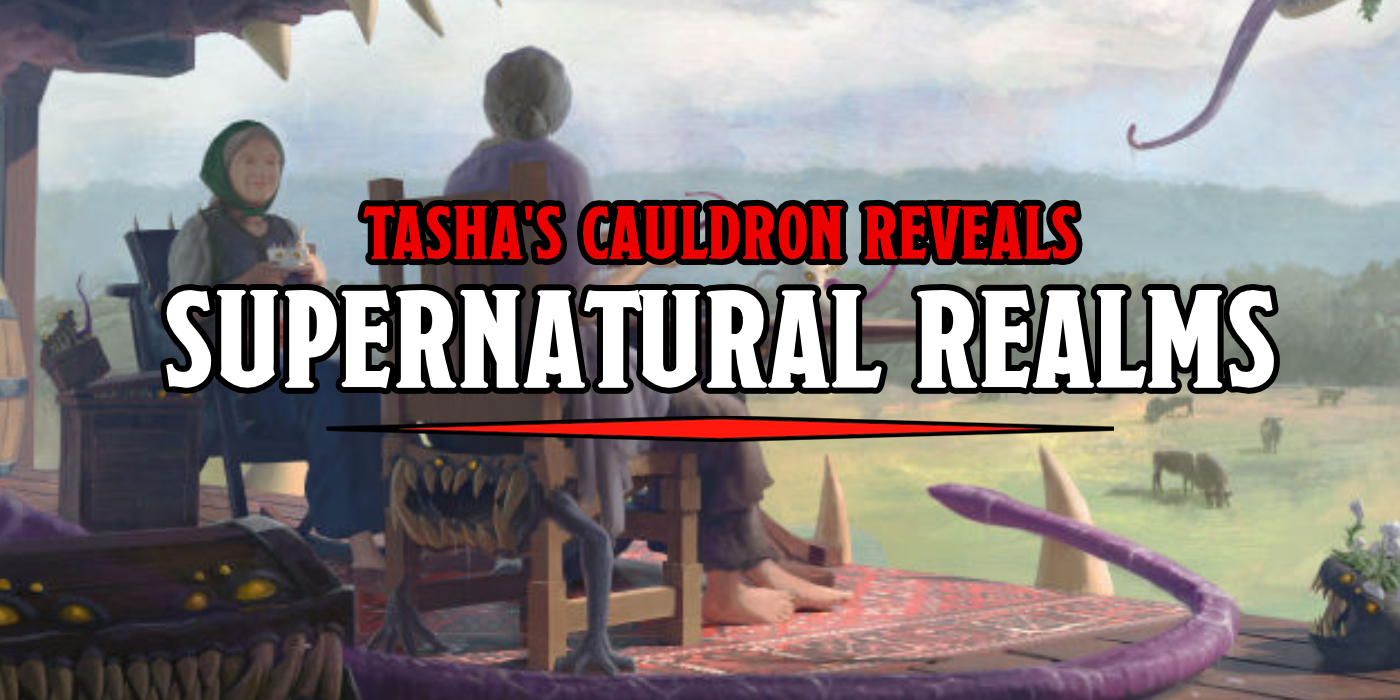 November 17th feels, in many ways, a distant dream–and yet if you listen carefully its footfalls can be heard rounding the corner. We’ve already seen the full list of the 22 all-new subclasses featured in the book, as well as the rest of the table of contents–but what does it all mean? For the subclasses, we can turn back to the Unearthed Arcana to get an idea. But as for the rest?

Well that’s what we’re here to talk about today. Jeremy Crawford has been sharing details of what’s to come, whether in segments on Lore You Should Know in the DragonTalk podcast, interviews, videos with D&D Beyond (like the one seen later), and the like–we actually have a fairly good picture of everything else in Tasha’s Cauldron. Let’s take a look. 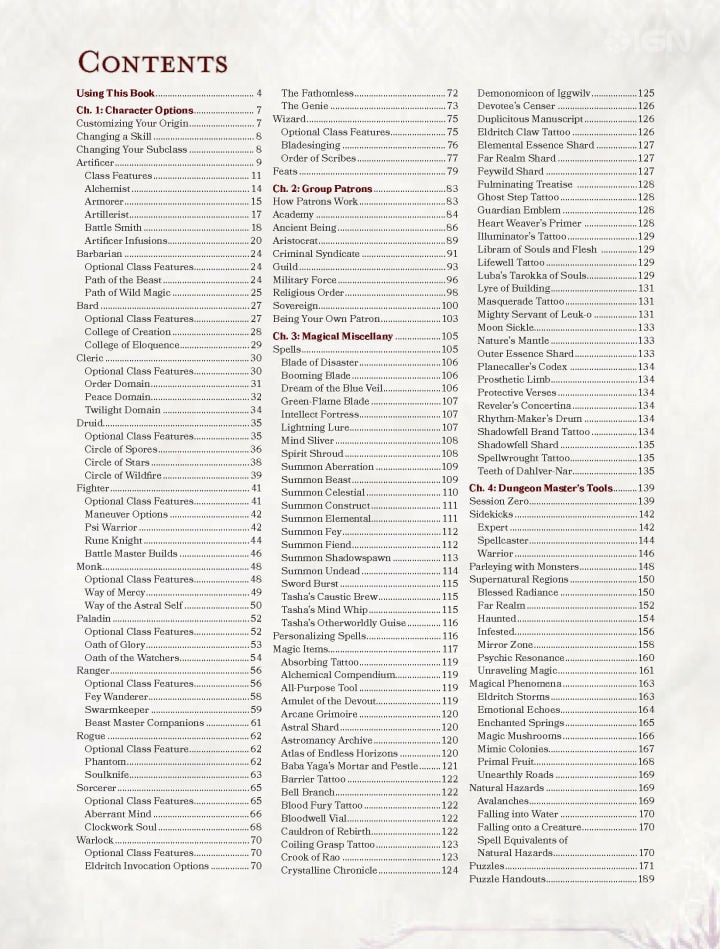 Today we’re looking at Supernatural Regions. This is possibly your DM’s new best friend. These are strange worlds that you can explore–they capture the feeling of stepping into another dimension. As Crawford outlines, each of these has its own particular theme, and you can use them either as a destination, or as a flavor for whenever it’s time to explore your “regular” world. These are places where the rules of reality are supplanted by another set of rules altogether, the rules of genre. In the Far Realm, for instance, we come up against D&D’s take on eldritch/cosmic horror: lots of tentacles, slime, and other alien things. 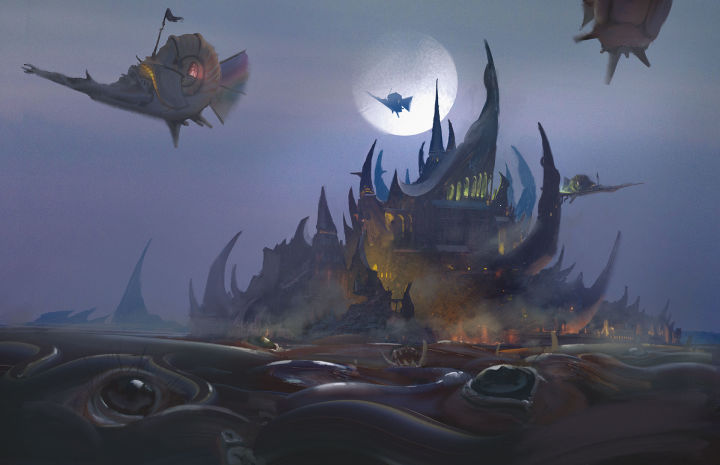 The Far Realm, as the name implies, is this far off dimension that is outside the great wheel of existence. It’s this mind-bending reality that is not bound by the rules of the rest of the D&D multiverse, and it is that reality that creatures like mind flayers and beholders originally come from. It’s one of the reasons why those creatures are so terrifying to pretty much everybody else in the D&D multiverse. And not just humanoids, you know – even dragons are probably like, ‘Oh no.’ And we have a massive table of different effects that player characters might have to face in a place where that alien dimension has erupted into the material plane.

Are you looking to add more gothic horror to your game? The Haunted Realm is your friend: 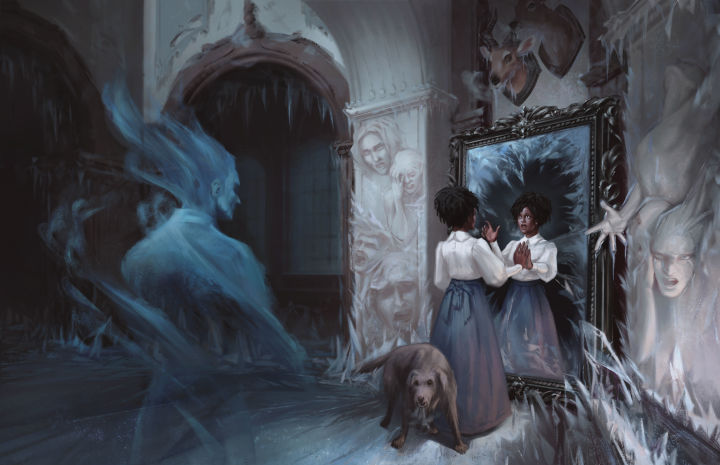 The Haunted Realm is, in some ways, the classic ‘spooky horror area’ that a group might wander into; and just as we did with the Far Realm incursion, here we give DMs a set of mechanical options for spooky things a group of heroes might face if they wander into this place that’s haunted by the unquiet dead or some other disquieting presence. And for both the Haunted Realm, the Far Realm incursion, as well as the other supernatural regions in the book, each one has a set of triggers that we’ve provided where, if one of these triggers occurs, then one of these rules options can click into place. Giving the DM essentially a menu of things that can suddenly cause the haunted region or the Far Realm region to suddenly jump into action. And in each case, those triggers are tailored to the particular supernatural regions so that you really get the sense of being in this place, saturated with a particular type of magic or supernatural power. And those triggers are a mix of story events occurring and mechanical things occurring.

You can tell the intention for each of these–they’re there to help set the tone for some of your stories. If you want to tweak a session away from the usual slapdash adventure and get spooky, here are the tools to do it. And this is the kind of stuff DMs need–because the rules of D&D don’t really lend themselves to other genres outside of fantasy adventure, possibly fantasy superhero comedy. So there’s always a bit of work to get at something outside of that. Speaking of whimsy though: 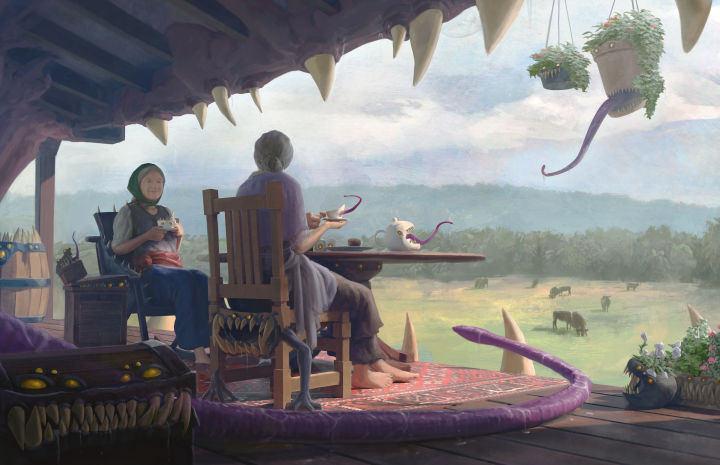 We love including in most of our books dashes of whimsy, and sometimes the whimsy gets mixed up with the horrifying. And the mimic colony is a great example of the whimsical and the horrifying hanging out together. We just thought it would be delightful – slash terrifying – to have this whole region you wander into and have this dawning horrific realization that everything we’re looking at is a mimic. And so we provide rules for what happens when you discover you’re in a mimic colony. And that even includes providing a set of what are essentially lair actions for the mimic colony itself. We also include in those rules some… subtle enhancements for mimics that are in that colony, like them suddenly gaining the ability to communicate. So you could suddenly discover you’re getting telepathic messages from a chair, which could be played very whimsically in a particular campaign, or could be a source of great fear.

Essentially Mimic Colonies get lair actions that can help play things up. These are just some of the DM tools included in Tasha’s Cauldron of Everything. This book feels like the player AND DM supplement you’ve been waiting for. Come November 17th, we’ll know for sure!