Age of Sigmar: Bow Down to the Prince – Let’s Talk New Slaanesh Minis! 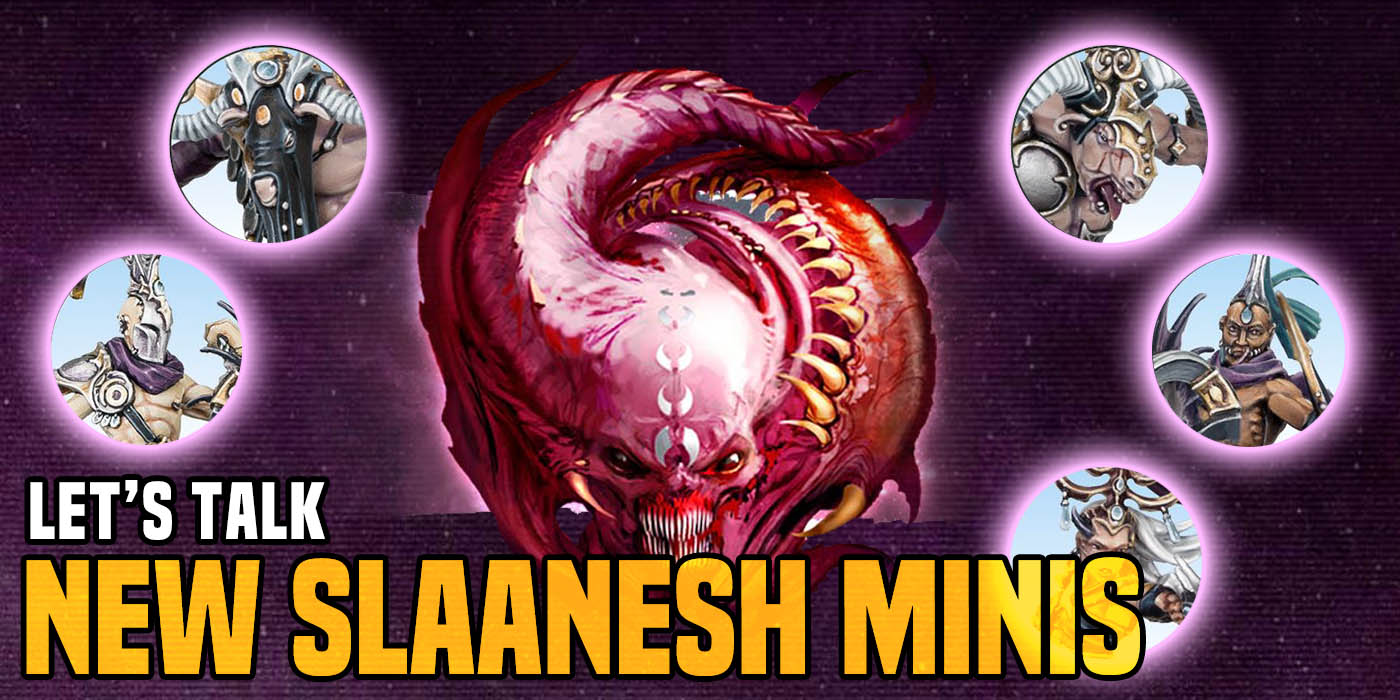 Slaanesh has been busy in his imprisonment, and he’s bringing a few new toys to the Great Game.

Well it seems like it’s a pretty good time to be a Slaanesh player these days. Lots of new previews and warband gubbins for the mortal side of the Hedonites seems to herald an upcoming big release. With Broken Realms lore officially freeing the Prince of Pleasure, it makes sense that his followers would multiply as his influence does. Here’s some quick thoughts about what’s been revealed to be coming up from the Warcry GA Chaos book, and what I hope it means for the AoS game as a whole.

The lowest level of the Hedonite totem pole, these are the typical Chaos cultist build a la Blood Reavers and Kairic Acolytes. The archers are quick moving ranged units that seem to be designed to disrupt the enemy’s attacks more than actually do damage. The Blissbrew toxin they apparently dip their weapons in sounds like something that will play havoc with hit or wound rolls to kneecap heavy hitters, or possibly hit leadership to make them more likely to flee after a few good hits (though that seems less likely since the Hedonites want to do more hits than kills). The Seekers are all that nastiness plus speed, mounted skirmishers riding Slaaneshy steeds to flit around the battlefield. In an army that favors speed and skill over raw power, these guys are going to fit perfectly.

The heavier cavalry version of the Blissbarbs, these guys carry wicked glaives and seek to take down the biggest enemies they can. My imagining is that they’ll be able to generate depravity points for kills with their glaives, and will probably do better farther away from their allies. They are listed as being rather competitive, so they might get buffs for being either the first to hit a foe or being outside a certain radius from allies. Either way, they will be interesting alongside the Hellflayers, and I’m curious how they’ll fit in overall.

At long last, Tzeentch isn’t the only team with special Beastmen anymore. The Slaangor are decked out with wicked claws and pincers, and there seems to be the potential for Slaanesh Doombulls alongside the typical gors (probably in opposition to the Tzaangor shamans). They are viewed as avatars of the Dark Prince, so I imagine their presence will increase the leadership of nearby Hedonite mortals. Also judging from the description of their claws they probably have an extra point or two of Rend. We’ll have to wait until Saturday to find out what they do for sure though.

All of this is of course speculation, and it could be that these models only function in Warcry, but somehow I doubt that. I hope this means other armies get a similar treatment, but again we’ll have to wait until Saturday to find out.

What do you think these guys do?