D&D 5e Guide – How To Play a Sorcerer 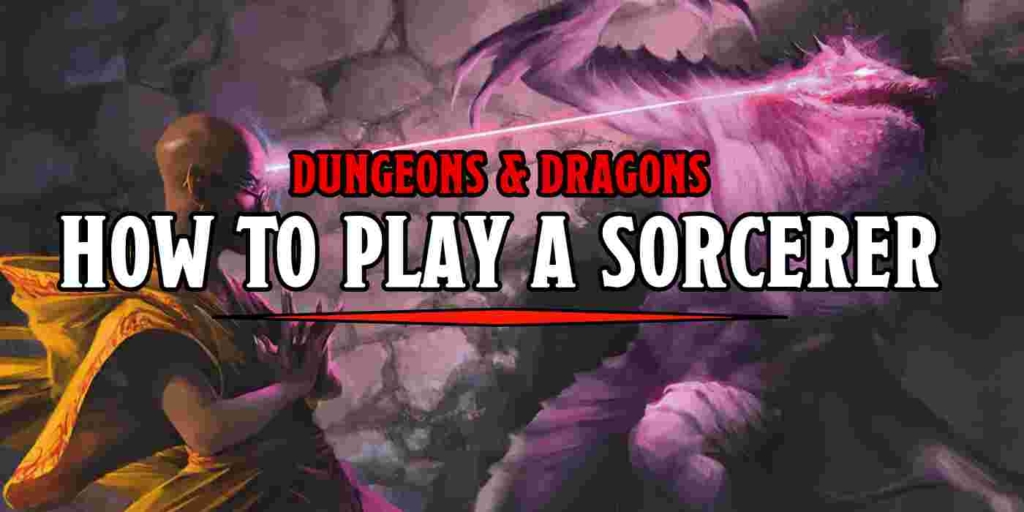 From new subclasses, bonus spells, and feats to surprising tricks, here’s everything you need to know about how to play a sorcerer.

Sorcerers have come a long way since the beginning of 5th Edition. They’ve always been a class about intense flexibility moment to moment, but at the cost of overall versatility. They get fewer spells on their lists than wizards, but they can bend the rules of magic in interesting ways to either cast more spells to more effect. Sorcerers are all about how to get ‘more’ out of your spell slots (whether by having more of them or by modifying them in 5th edition). They’re the “raw power” answer to the careful study of Wizards.

And while they’re not the easiest class to pick up and play, they hide a lot of versatility. In this guide we’ll ask:

First and foremost, sorcerers are spellcasters. However you decide to play your character, you’ll end up using your spells.  All of your basic class features are about giving you more, or different ways to use your spell slots. Your bread and butter feature is Font of Magic, which lets you spend a limited pool of sorcery points to either give yourself more spell slots, or to get a little more oomph out of one of your spells with Metamagic abilities.

As a sorcerer, you’ll only ever know 15-20ish spells, which might seem like a lot, but you’ll grow that list slowly over the course of many levels. When you add a spell to your list, you’re saying, “I want to do this with my character.”

So what can you do with a sorcerer? A few different things. You can pick AoE spells like Fireball and Cone of Cold to clean up house in big encounters, or spells like Sunbeam or Magic Missile to do some pretty significant single target damage. In general you’ll want to have a nice mix of mid-level spells, because you have so few high level spell slots, once they’re gone, you still want to be able to use your most populous spells.

That said, a few things that might not be obvious. Sorcerers, just plain vanilla sorcerers, are some of the best spellcaster/melee options out there. You can take the Draconic origin to get some decent armor if you feel like you need that, but any origin will do. The secret is to make use of the special melee cantrips green flame blade and booming blade to make melee attacks as well as cast spells that can potentially benefit from metamagic. We’ll take a look in a moment, but you can cast a powerful spell like Fireball or even a single target like Disintegrate and follow it up with a quickened melee cantrip of your choice and you’ll pile on the damage. Especially if you’re using a spell like Shadowblade which gives you even more magic and damage.

Otherwise, you’ll want to get a good mix of offensive spells (look for ones that give you a decent versatility or power), and some utility spells that give you access to things that other classes can’t do. Fly is a great one no matter what you’re playing. Let’s take a look at metamagic.

Careful Spell: This combos very well with a spell that hits a whole area and does nothing on a successful save. Is that fighter up there while you want to let loose with a Hypnotic Pattern or Confusion or something–you can effectively spare them. So if you really want to lay down some control, this is a great choice.

Distant Spell: This can be surprisingly helpful with mobility–because you’ll be able to cast your spells from a safer distance. Drop Haste from even further away, or hit them with a closer-in control spell without needing to worry about getting hit.

Empowered Spell: If you want to do damage, this one is a great back-pocket option to make sure that your spell slot spells really hurt when you need to. Being able to reroll 5 (most likely) dice that turned up pretty lousy can make a huge difference.

Extended Spell: This one is sneaky–so a lot of people use it to make their “breakfast spells” last a little longer. But–it can also work on spells that have an offensive use as well. If you’re a control caster, you can really dictate the flow of the fight. Take a powerful target out for a long time with an Extended Banishment or a Suggestion that just keeps on giving.

Heightened Spell: This one is incredibly powerful. Giving someone disadvantage on that first save is a great way to shut down an encounter in the first round. It’s expensive, but dang does it help you take on powerful opponents. Works great for either damage or control spells (looking at you Disintegrate, Blight, or Banishment [again]).

Quickened Spell: For 2 sorcery points, you can cast a spell as a bonus action. Keep in mind you can only cast a maximum of one spell that takes spell slots during your turn (but you could conceivably get 2 cantrips out if you need to finish off your opponent), but a lot of sorcerers appreciate this kind of economy to their actions–cast a spell that takes your action to do something, like a Witch Bolt or Storm Sphere and Quicken whatever other spell you want to cast. It opens up a wing of spells that don’t otherwise see much use. This is where melee sorcerers shine. Especially with spells like Shadowblade.

Subtle Spell: Pick this metamagic option to make your DM hang their head every time you use it. Hide the fact that you’re casting spells in the middle of the grand banquet. Notably: Charm Person doesn’t have Material Components. No one will know until it’s too late.

Twinned Spell: A powerful metamagic ability. Target two creatures with one single-target spell (see restrictions like it can only ever target one other creature) and for a paltry cost, you effectively get a free spell slot out of the deal (AND you can keep more than one concentration spell going at a time). Offensive or Defensive, this is great.

What Subclass To Pick

So quick note here, with the recent release of Tasha’s Cauldron, two of the subclasses have an advantage that the rest don’t. We’ll talk about that in the Aberrant Mind and Clockwork Soul origins.

Aberrant Mind sorcerers have some significant advantages. Released in Tasha’s Cauldron of Everything, they’re one of the two sorcerer subclasses to get bonus spells. This means they’ll know more spells than other sorcerers. They get access to the Wizard divination/enchantment list in a weird way. And on top of that, this subclass lets you use telepathy at will, and you can cast some of your bonus spells using sorcery points at a discounted rate–doubly so because they’re automatically subtle spells. This subclass has a powerful transformation as well, which makes it powerful for either melee or spellcasting builds.

Pick this class if you want to be a font of arcane power. You’ll be able to deal psychic damage up close or at a distance

Clockwork Soul sorcerers also gain bonus spells. They have powerful defensive magic if you want to play a party support caster. But if you want to get in there and mix it up, the Clockwork soul is a great way to do that. They can neutralize advantage and disadvantage, and can create a special ward that protects against incoming damage. Another great option for melee sorcerers.

Divine Soul sorcerers get to build one of the most unique spell lists that a sorcerer can. The biggest thing this class does is add cleric spells to your list. This gives you access to a broad range of arcane and divine options–honestly it’s a ton of fun. The rest of the class features give you some useful benefits if you’re healing. And a permanent fly speed is pretty great. A great pick for whatever role you want to fill.

Pick this class if you want to really play with flexibility. Or if you want to craft a custom spell list the likes of which the world has never seen.

Sorcerers with a Draconic Bloodline are one of the iconic sorcerers. They’re excellent at elemental spells, and if we’re honest it’s probably going to be fire. It gives you the ability to do increased damage or have extra damage. If you want to take on multiple enemies, or a single powerful one, this is the subclass for you. It’s the iconic hurling powerful magic around subclass.

Pick this class if you want to deal damage first, and ask questions later.

Shadow Magic empowers sorcerers to call upon the powers of that lurk between life and death–draw upon the fell and shadowy power of the…uh…shadow fell. It offers up a couple of extra options for your sorcery points that are incredibly powerful. You thought Heightened Spell was good? Imagine a version of that that you can use on a single target that lasts until they die. That’s what Shadow Hound does. It combines with your ability to toss darkness around willy-nilly. Still being able to see makes these characters great at control.

Pick this class if you want to summon up spirits of air and darkness. Well. Mostly darkness.

Storm Sorcery is all about power…unlimited power. Seriously. It is the thunder and lightning subclass. Heart of the Storm and Storm’s Fury you want to be in the midst of your enemies. You don’t want to take too much in the way of damage, but you do want to be in there mixing it up. Mobility is key for this subclass. Heart of the Storm lets you fly 10 feet without AoOs, so you’ve got that covered.

Pick this class if you want to deal lightning damage and fly around. But be warned, you’ll trade damage for mobility

Wild Magic rounds out the Sorcerer Selections with randomness. This relies on something interesting happen every time you cast a spell. It might be good, it might be bad. It might not be what you intended, but it definitely will be interesting.

Pick this class if you want excitement every time your turn comes around in combat. And if you have a DM willing to make you wild surge.

Well that’s the sorcerer. An avatar of arcane magic. A bastion of power–within select confines. They can be a ton of fun to play. But you have to be ready to build your spell list from the get go.