The CIS fleet is here, and in addition to their capital ships, they also get a new Squadrons pack. The pack comes with 4 different types of squadrons. Let’s take a look at how they play. 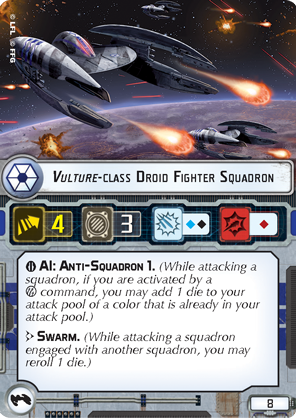 I’ve covered Vulture Droids before in an earlier purview so I won’t spend much time on them. In short, these are ultra-cheap and disposable swarm fighters. They work best when been activated by a carrier and are fairly similar to combat prowess to a TIE fighter. 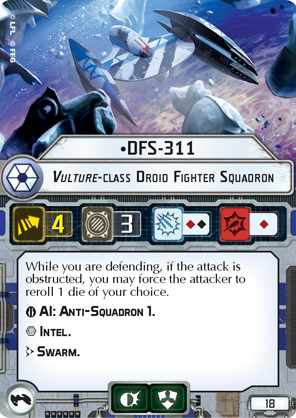 DFS-311 is a unique Vulture Droid “ace”. Between their defense tokens and rule that makes enemy reroll obstructed attacks (1 die, not the whole attack) they are a lot more durable than the standard model. They also get a much-boosted damage output and intel, taking one is likely worth rough two regular versions and is much easier to activate. 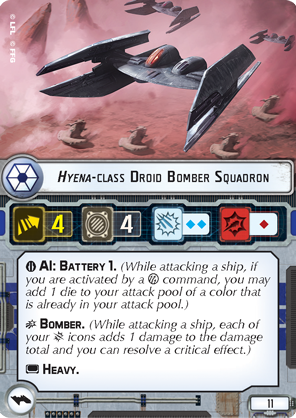 The Hyena is the main CIS bomber. While it’s fairly cheap, and horrible in a dog fight, it makes for a very solid bomber. At speed 4 its one of the faster bombers out there, and when being activated by a carrier gets to throw 2 red dice at enemy ships. That’s up to 4 damage per bomber, before any other buffs. With only 4 hull, it’s a bit of glass cannon, but overall the Hyena is a real threat with one of the highest damage outputs of any non-unique bomber. 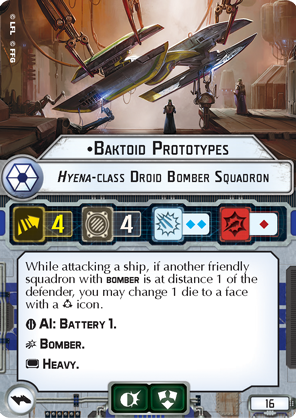 The first of two unique Hyenas the Baktoid adds defense tokens and can change one of its dice to an accuracy when attacking ships, contingent on there being another friendly bomber nearby. I don’t think the special rule is all that great, you’ll probably only want to use it if you happened to roll a blank, but paying 5 points for a scatter and brace isn’t a bad trade. 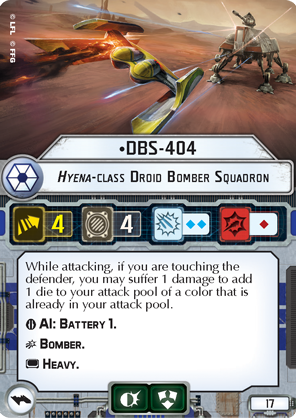 DBS-404 is the other unique bomber you get, and they are great. Not only to you get a scatter and brace token, but the options to take a damage to add a die to your pole against an enemy you are in contact with. This gives the squadron a really amazing 3 red die anti-ship attack. If you can get some buffs on this unit it can throw out more damage than a capital ship. It is a super glass cannon, and likely won’t do it more than once or twice, but it is a real threat. 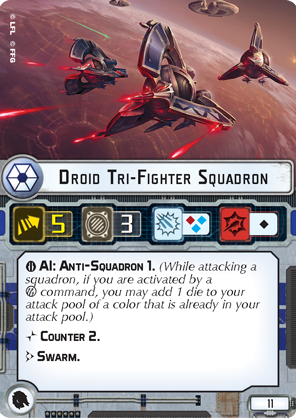 If the Vulture Droid is similar to the TIE fighter then the Tri-Fighter is the CIS version of the Interceptor. They are fast, but fragile, have counter 2 and swarm and can throw out a ton of dice. In fact, when being controlled by a carrier they are deadlier than an Interceptor, for the same price. Overall these are a great squadron and will make the enemy sweat. 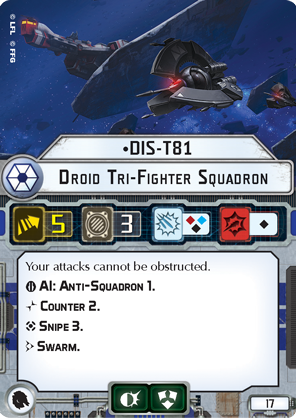 If you worry about getting too up close to the enemy, you’ve also got the unique Tri-Fighter DIS-T81. For an extra 6 points, you get defense tokens, a slightly different anti-squadron battery, and snipe 3. This makes them a very slippery enemy, deadly at many ranges and survivable. Seems like a good deal. 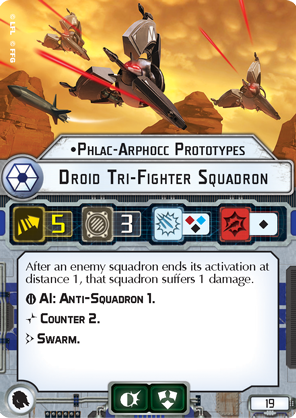 You’ve also got the Phlac-Arphocc Prototypes. They are some crazy dudes. For 8 points you get defense tokens,  a different squadron battery and any enemy squadron that ends an activation at distance 1 of them takes damage. That makes these guys amazing for area denial and allows them to potentially get a lot of free damage. 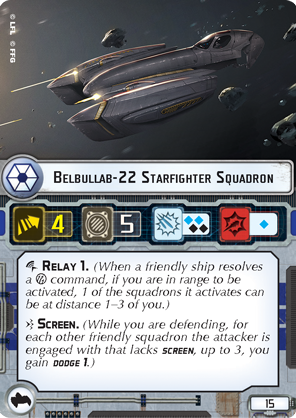 Lastly, we’ve got the Belullab-22, which is a bit of a strange ship. It’s got solid stats, with 4 move and a tanky (for the CIS at least) 5 hull. Good anti-squadron dice make it a solid dogfighter. Relay 1 lets it help activate more of your squadrons, and increase your command range, while Screen means it works best hidden in a massive of other friendly ships. While it’s not bad, it just comes off as a little weird, and seems a bit outclassed by the Tri-fighters. 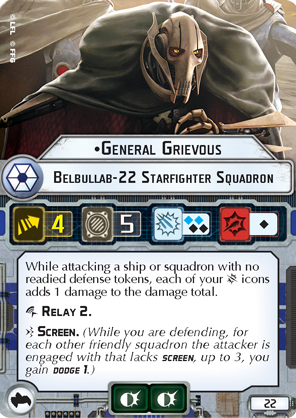 It’s unique version is General Grievous who gains a pair of brace tokens, and relay 2, and the all his crits deal damage if the enemy has no readied defense tokens. That means you really want him going after non-unique squadrons or activating last to pick off damaged enemy units. Overall he’s a pretty reliable damage dealer, who can put out up to 6 anti-squadron damage a turn.