Let’s take a look at some more info on the next ships for Star Wars Armada.

We’ve already looked at the initial announcements for the first Clone Wars Wave II ships, and it was a lot to digest. However, because there is apparently a god, and she is a loving god, FFG/Atomic Mass have gone ahead and released even more info on these upcoming ships. Let’s take a look at what we know. 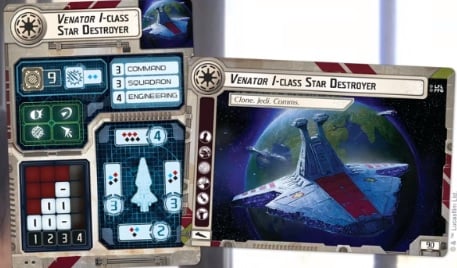 We’ve now got a clearer look at the Venator I and it looks like a very solid ship here.  It’s got good survivability, with 9 hull and good shields. Its firepower is solid and its got a really great upgrade bar, with weapon teams and both ordnance and turbo laser upgrade slots.  With a lot of black and red dice this ship promises to be a real killer at close range. Most importantly it can go up to speed 3 which is huge. It’s also fairly nimble at slower speeds.

The obvious comparison here is with the Victory I class, which is a fairly similar ship. For 17 points over the VSD1 the Venator 1 gains, a point of hull and a point of forward shields. It has the same front battery, but gains a die on the other sides. It loses a redirect token, but gains a containment and salvo token. It has an extra die of anti-squadron fire power and similar but slightly better upgrade bar. Most importantly it is a faster ship. Overall I think this puts the Venator I in a really good spot. The VSD1 is actually a very solid ship, really only held back its speed, without that issue the Venator looks poised to make its mark. 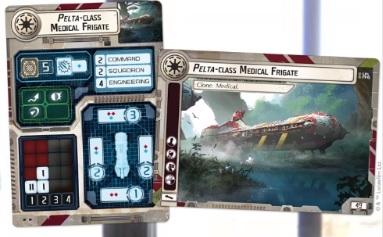 There’s not a whole ton of surprises here. The Medical Frigate is slow, but pretty nimble, and mediocre weapons. It’s got the firepower of a CR90, but none of the speed, or weapon upgrade options, to make it really deadly. Instead, it’s a fairly solid support unit, with squadron 2 (or 3 with Expanded Hanger Bays) and the fleet command upgrade slot. It’s cheap, tricky, and has just enough long-range firepower that you can’t totally ignore it. 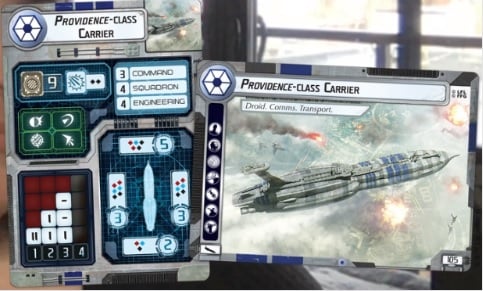 The Providence Carrier looks like a real beast of a ship. It’s got similar firepower to the Dreadnought version, only swapping a red die for a blue on its flanks, Combined it can get a very impressive 11 dice double arc. It’s got great upgrade options, and can function at any range. It’s also got Squadron 4 so, as the name implies, it makes a very solid carrier unit. It’s also got the coveted speed 3, making it fast for a big ship.

The obvious comparison here is with the MC80 Command Cruiser. At a point cheaper I think the Providence is actually the winner here, it just about as tough, but is faster and has more dice to throw around, while being just as good carrier. It’s a solid ship. 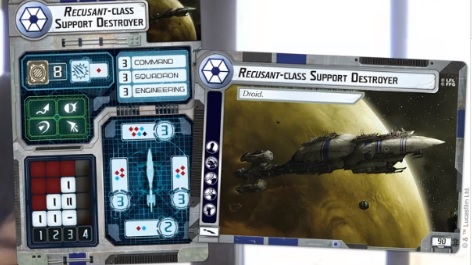 Lastly we have the somewhat odd support destroyer. The big news here is that she’s got speed three, making her a speedy and deadly ship. At 90 pts it’s not a cheap ship, but it brings a lot of red dice to the table, making it perfect for long-range attacks. With squadron 3, weapon teams, and two offensive refit slots it can also be kitted out to be an effective carrier. It’s a ship that at range can go toe to toe with a Venator, but will probably lose in a close-in fight. This is an odd duck, but one to watch, and with the right build it could be a game-changer.

Let us know what you think about these ships, down in the comments!