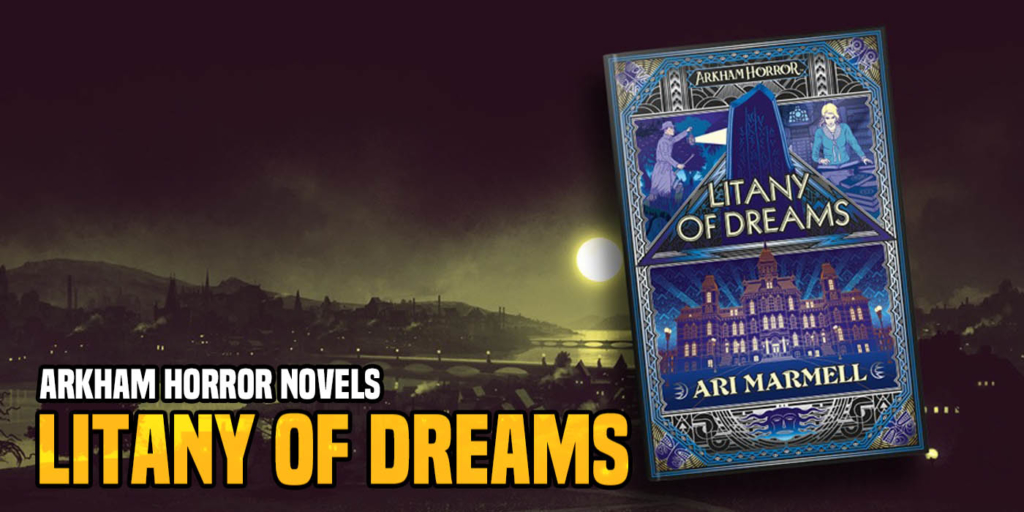 Alright Arkham Horror fans, if you haven’t been keeping up with the Aconyte books and novels for Arkham Horror, you’ve been doing yourself a disservice. Having read and written a review for Wrath of N’kai, and also read The Last Ritual (another good read, I do recommend it), I’ve been waiting for more of these novels. When we got a review copy of Litany of Dreams so naturally I was eager to dive in. And this one did not disappoint. 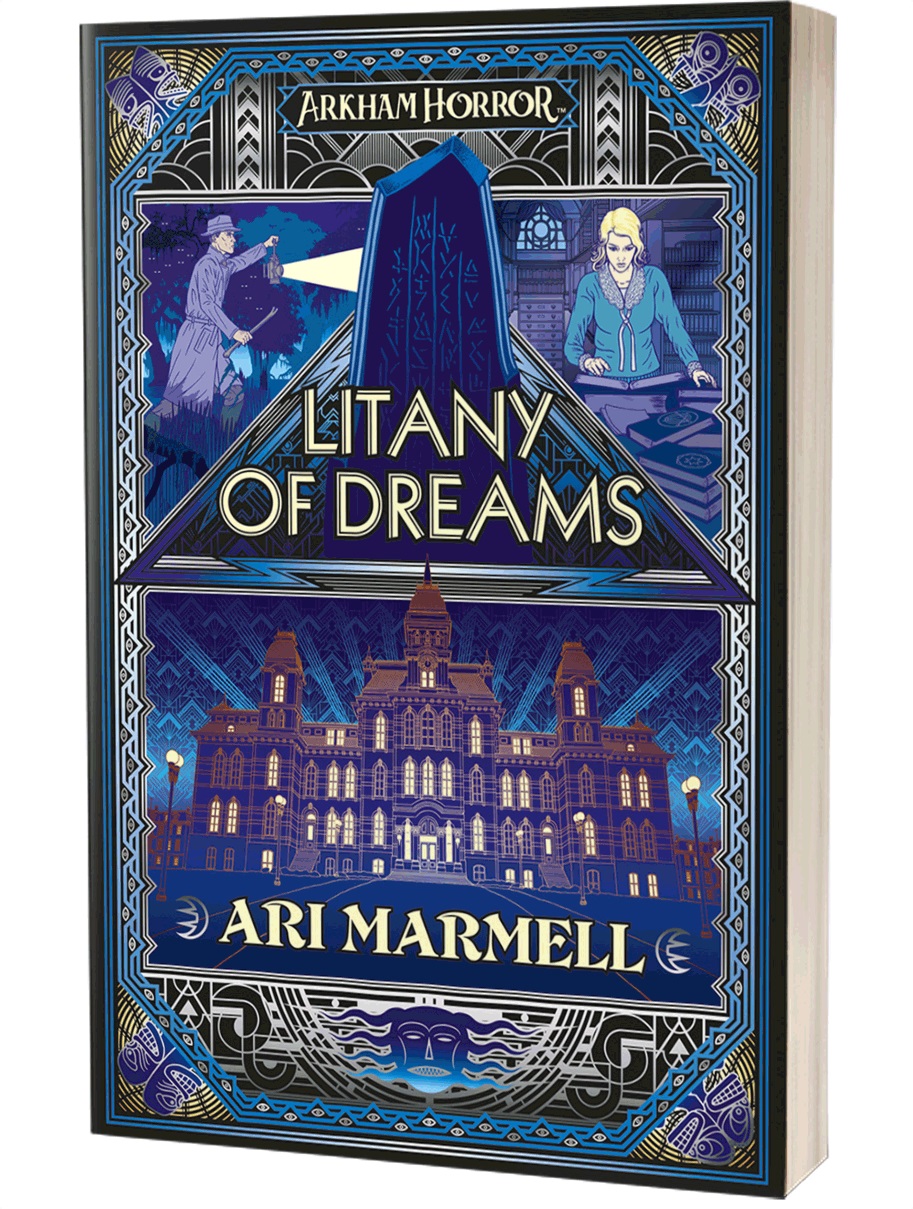 Let’s get some of the basics out of the way:

The mysterious disappearance of a gifted student at Miskatonic University spurs his troubled roommate, Elliot Raslo, into an investigation of his own. But Elliot already struggles against the maddening allure of a ceaseless chant that only he can hear… When Elliot’s search converges with that of a Greenland Inuk’s hunt for a stolen relic, they are left with yet more questions. Could there be a connection between Elliot’s litany and the broken stone stele covered in antediluvian writings that had obsessed his friend? Learning the answers will draw them into the heart of a devilish plot to rebirth an ancient horror.

Alright, from here on out – spoiler warning.

As I’ve said in previous reviews – I’m really not much of a book reader. I tend to get distracted and, unless a book really grabs me, I’m likely to just put it down and walk away. I’m happy to say this was one book that I did not want to leave unfinished! From the prologue that leaves you on a bit of a cliffhanger to the end of the novel – I was all in.

I don’t want to go detail-by-details (go read the book, it’s not *that* long) – but there are some key players I wanted to introduce. First up, we have Elliot Raslo a student at Arkham’s Miskatonic University. His Roommate has gone missing and the police haven’t exactly been on the top of their game when it comes to searching for a missing person in Arkham. Mr. Raslo has been “infected” by a chant his roommate Chester Hennessy had transliterated and uttered. Basically, Chester had figured out how to pronounce the words that were engraved on a broken stone steele as part of his research project. And those words, well, they happened to also be dangerous. So without knowing what he was saying, Chester unwittingly caused some serious dangers to get let loose.

The next protagonist we need to know about is William “Billy” Shiwak – an Inuit tribesman who’s also in search of a missing relic from his ancestral lands. You’ll never guess what it is (hint: It’s the broken chunk of stone steele). One of the things I appreciated about Billy was that the author didn’t shy away from the fact that he was a stranger in Arkham in the 1930s. He get a lot of side-eye glances and a lot of the “you don’t belong here” treatment. There were some racist characters in the book – but some of them were also classist, too – just looking down on someone because they look different or appear to have less social standing than you is bad. And it happens. And you get to see some of that in how Billy interacts with the citizens of Arkham. 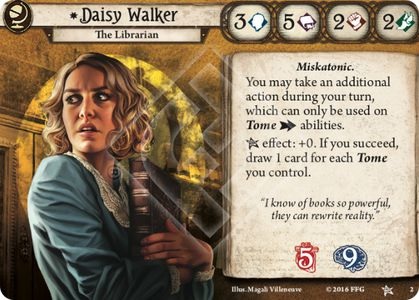 Also, it wouldn’t be a good Arkham Horror Novel if we didn’t get to interact with some of the more established investigators/characters from Arkham. For this book we get to hang out with Daisy Walker for a good chunk of the story as she get’s drawn in due to her proximity to the missing student and the fact that Elliot has been hanging out in the Library’s restricted section following up on Chester’s research.

Those three characters (basically) make up the main characters for this book. There are some other major players but I don’t want to completely spoil it. Anyhow, this trio of unlikely paranormal investigators have to team-up and pool resources to figure out what’s happened to Chester – and another missing professor. They do some digging and end up having to tangle with some less-than-savory smugglers types. Then Billy and Elliot have to venture into a small, rural community in the swamp. They meet some unlikely allies and find themselves in a what can best be described as “a zombie outbreak in the swamp.” That’s when things get REAL dark and gritty.

The story takes a few more twists and turns and I was getting some Walking Dead style flashes and the people who are also infected with this “antediluvian chant” have become…something else. Intelligent but also alien (and dangerous), there’s a few shoot outs and plenty of gore to go around. There’s a particular scene in a basement that’s intentionally nauseating. Well played, Mr. Marmell.

From mystical incantations to gunfights in the swamp to brutal hand-to-hand combat, this book packs the action in there. But there’s also a lot more to the characters than cardboard cutouts that go from one check-box to the next. I found myself really rooting for this gang to come through the other side of this adventure, but I knew they would carry more than just the physical scars from this experience. How they deal with loss and grief is a big part of what makes this book worth reading.

It’s another great addition to the pulpy-horror that is Arkham Horror. I enjoyed this one and think that any one who considers themselves a fan of Arkham Horror should give this one a read. 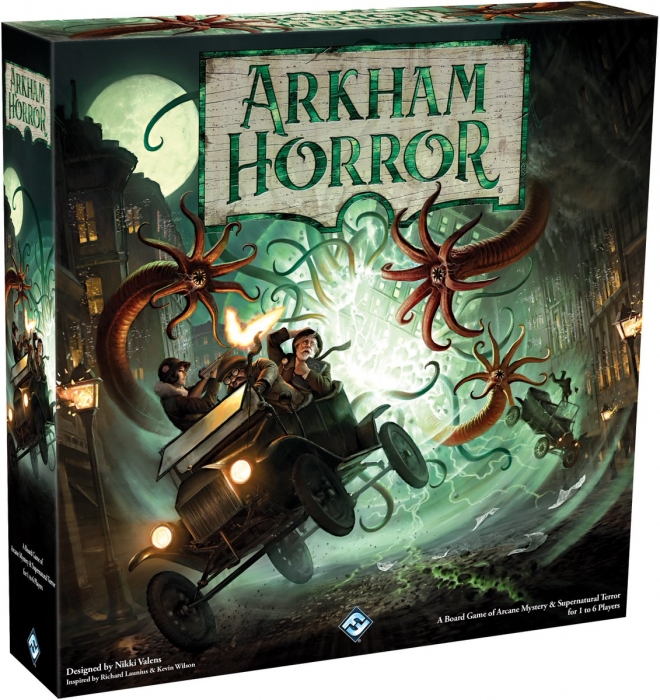 Check out the board game if you want to tackle these eldritch horrors on the tabletop!

I hope we get to see more from these characters…perhaps new playable Investigators for other instalments?