We’ve all been waiting with a lot of excitement for the next wave of Armada Clone Wars goodness. This week Atomic Mass Games has been showing off the rest of the new cards on their Facebook page. We’ve also gotten our hands on some of the new ships. So let’s take a look at the final cards. 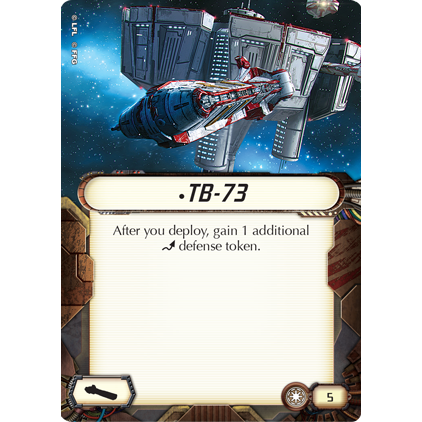 TB-73 is a simple title upgrade for the Pelta that gives you an extra evasion token. Now this card isn’t any kind of game changer. It doesn’t open up a ton of new options, but it does make your ship a bit harder to kill which is never bad. It also pairs well with another upgrade we will see in a moment. 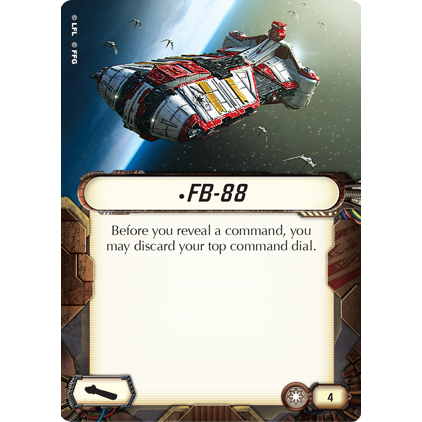 FB-88 is another pretty easy to use title card. This one lets you discard your top command dial before you reveal it. This lets you have a little more flexibility in using your ship and sort of lets it act like a command 1 ship, but with the benefits of being command 2 as well. This is another useful but not amazing title. 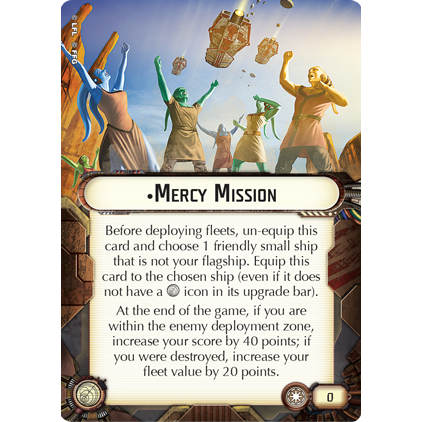 Lastly, we have Mercy Mission, one of the few, if not the only, cards that affects end game points. At the start of the game, you can move it to be on any small ship that is not your flagship. If the ship is alive and in the enemy deployment zone at the end of game you gain points. If it is destroyed you are penalized, otherwise nothing happens. This card is free and unique so it can be easy to take one and it has a real potential to be rewarding. Because it gets reassigned to another ship it can be thrown onto a Consular class and have a real good chance of getting into the enemy zone. It can also be left on a more survivable TB-73. This one has some potential but will need more thinking on. 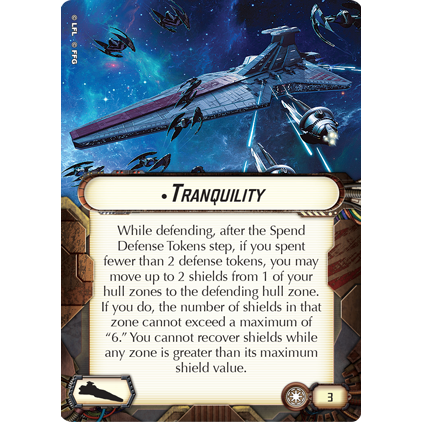 Tranquility is really an amazing looking Venator title. This card lets you move around shields during each attack. While you can’t use it if you spent more than two defense tokens (not a common occurrence in my experience) you can use it if you’ve spent 0 tokens. This means that a Venator with it should just about always be able to make use of all its shields in a game, and will never have an unshielded zone. This one verges on auto-include. 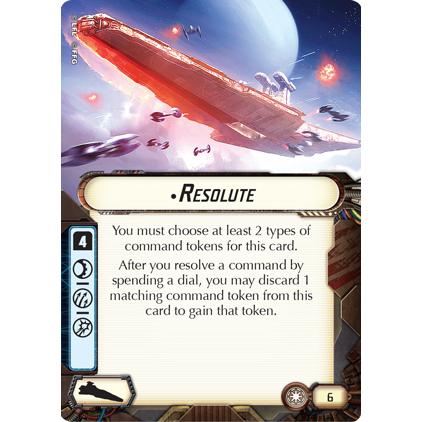 Another really solid title, Resolute basically gives you free tokens. I think this is solid and very generical useful. 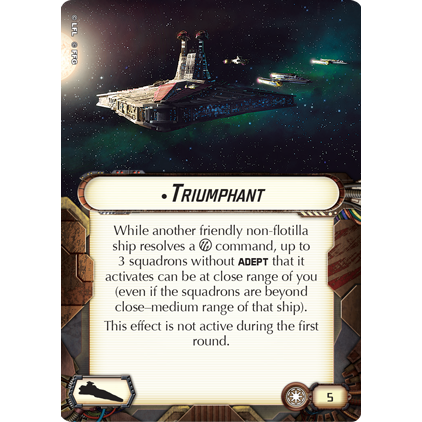 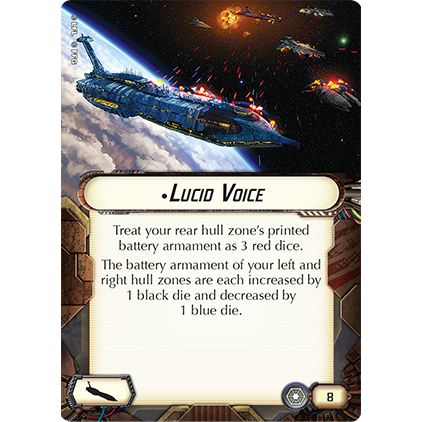 The Lucid Voice is almost like having a third variant of Providence classes to run. This title card changes up the dice of your batteries, swapping the black/blue/red mix of both versions rear battery for 3 red dice, and giving you move black and less blue dice on your sides. This pushes the ship into a powerful close range role, while letting it take pot shots at anything behind it. It’s a nifty card, but it’s also kind of pricy and doesn’t actually give you extra dice, though it does raise your damage potential. 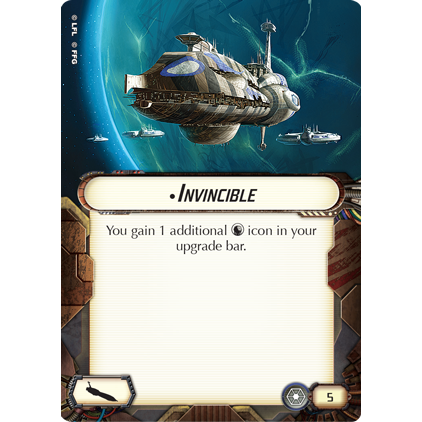 Invincible is a powerful but straightforward card, giving you an extra defensive retrofit upgrade slot. This makes the ship even more like an MC80 than it was before. There are good uses for this and I expect to see it often. 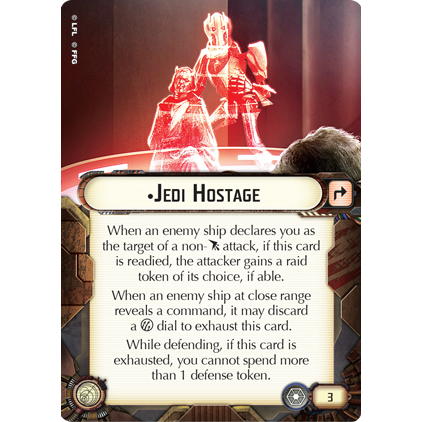 So… Jedi Hostage seems pretty bad. This card forces an enemy that attacks its ship (if readied) to gain a raid token of their choice. Since it’s of the attacker’s choice as long as they only shot you once or twice (and more is pretty rare) it is not likely to actually hurt them at all. So the benefit here is pretty minor. (I also find it funny that Imperial and even other CIS players care about your Jedi Hostage).  What’s worse the enemy can, for not much effort, exhaust the card, which not only means they aren’t hurt by it, but now you can’t spend more than one defense token. Basically, you are paying points to maybe minorly annoy the enemy with a chance of getting yourself messed up. Maybe skip this card. 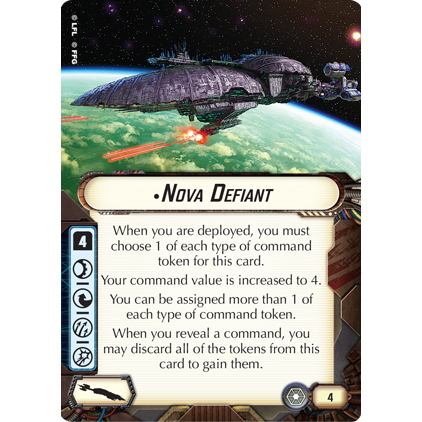 Nova Defiant is kind of a strange card. It raises your command to 4 and allows you have more than 1 of each type of command token. It also on the turn of your choice, lets you gain one of each command token. If you really like tokens this is the card for you, but it will make your ship a little less flexible. 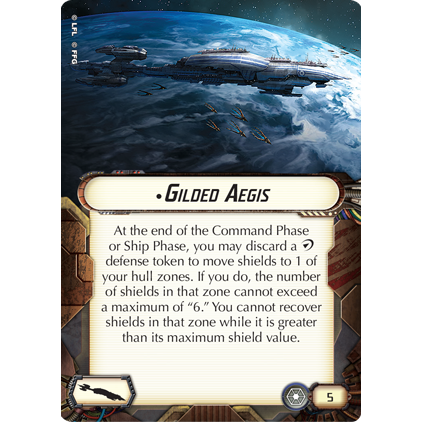 Gilded Aegis lets you discard a redirect token to move some shields around. For 5 points and given you only have one redirect token this really doesn’t seem like an amazing deal. I think I’d rather just use the token as is. I suppose you could pair it with Grievous to let you get the token back and gain more benefits, if the enemy doesn’t kill the right targets this could backfire on you. Outside of that combo it just doesn’t seem great. 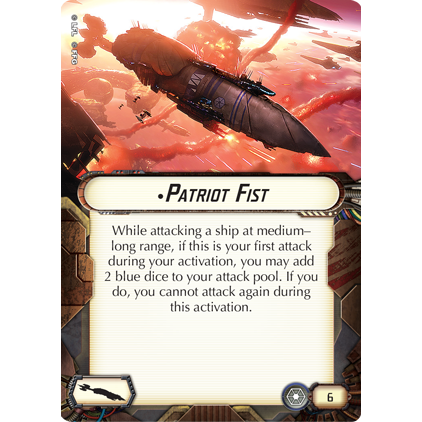 Let us know what you think of these cards, down in the comments!

Age of Sigmar: A Reckoning is Coming, But From Whom? *SPOILERS AHEAD*