Age of Sigmar: Blood Knights Rules Preview – The Hammer of The Soulblight Vampires 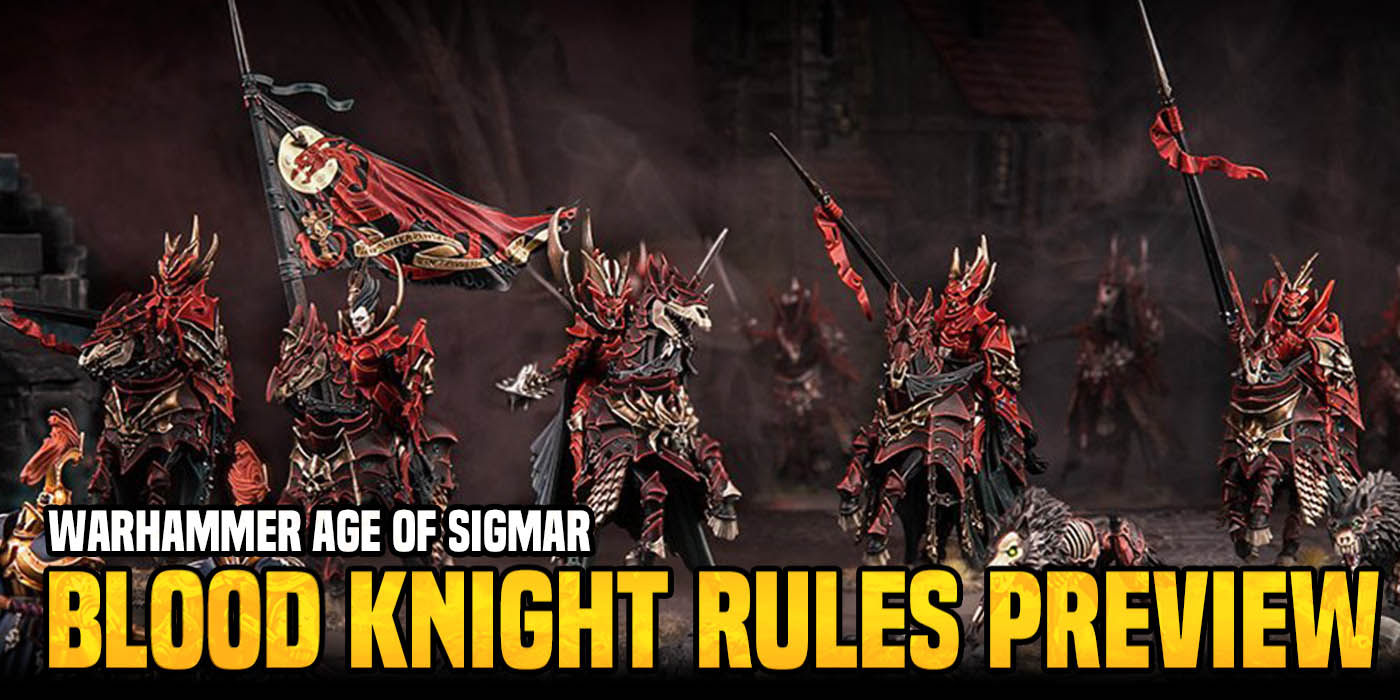 The Blood Knights are a thunderous cavalry unit for the Soulblight Gravelords – but what will these killer vampire do? Let’s find out!

The Blood Knights are back with some amazing new models and they are ready for a scrap on the tabletop with some new rules. Today, we’re getting a closer look at what they can do – and it’s not looking good for whatever poor souls are in their way.

“With the perfect balance of speed and hitting power, even small units of this elite vampiric cavalry are sure to prove their worth in blood. Their distinctive heavy plate armour and barding grant them fantastic protection, while 3 Wounds and a whopping 10 Bravery ensure they’re still in the saddle when it’s time to get stuck in.”

3 Wounds, 3+ save, 10″ move – looking good so far! And their basic attack profile with either lance or blade is still 3 attacks that hit on 3+ and wound on 3+ with -1 rend and 1 damage. And let’s not discount their mounts (who always seem to do the work whenever I use cavalry). Another 3 attacks with a 4+/4+ profile – not too shabby! But this is just the basics…there’s more to this unit than these stats. 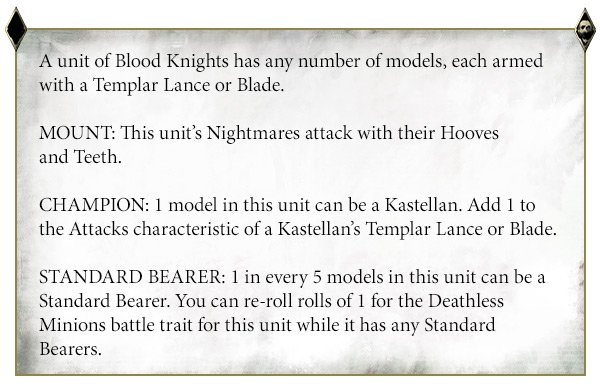 The unit champ gets an additional attack (unsurprisingly). And you can also have a standard bearer which allows re-rolls of 1 for Deathless minions:

Blood Knights can also have a max unit size of 15 just FYI. That’s a total of up to 3 standards, but only 1 champion ever. Which…makes perfect sense. Moving on. 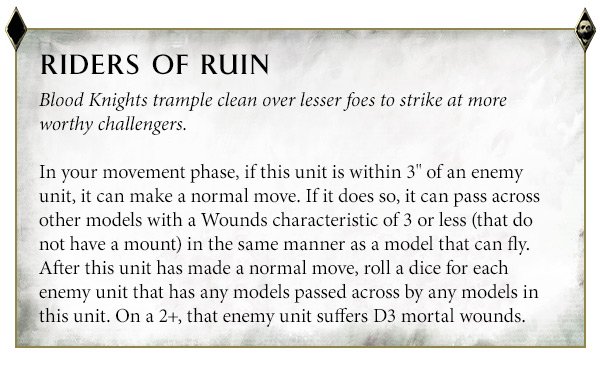 The Blood Knights have some Mortal Wound generation with Riders of Ruin. They can ride through units they would normally be “locked in combat” with. Not only does this give them some more freedom of movement, it allows them to threaten some backfield objectives rather easily. This is an interesting option that I’m sure they are going to get to exercise. It can allow them to also get ready for another charge after their move, too. Why would you want to charge?

Because it’s going to hurt! An extra damage per attack is pretty nice. Furthermore, the more stuff they kill, the better (for their wounds).

It’s a nice little boost to help top off a vampire. That could be pretty helpful to keep them around and fighting. And if you wanted to run an entire army of all-cavalry then consider the Kastelai! 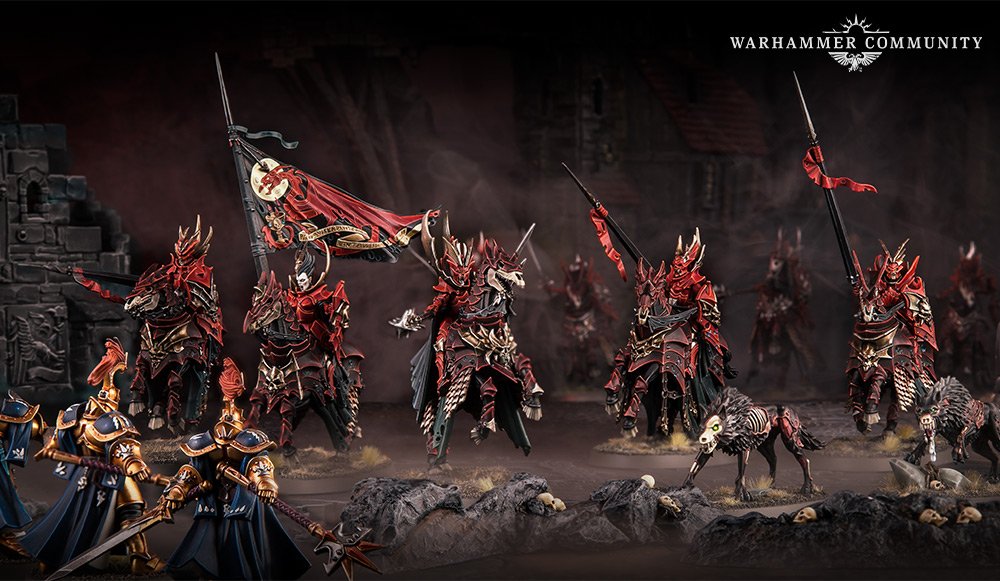 “Because of their need for mobility, combined with their knightly bearing, Kastelai armies are often entirely mounted. Since they can take Blood Knights as Battleline units, there’s no excuse not to load up on them. “

YEP! You read that right. Blood Knights as battleline. Could be pretty brutal. And if that’s not enough to catch your interest, you might like to know that they can also attack from pretty weird angles… 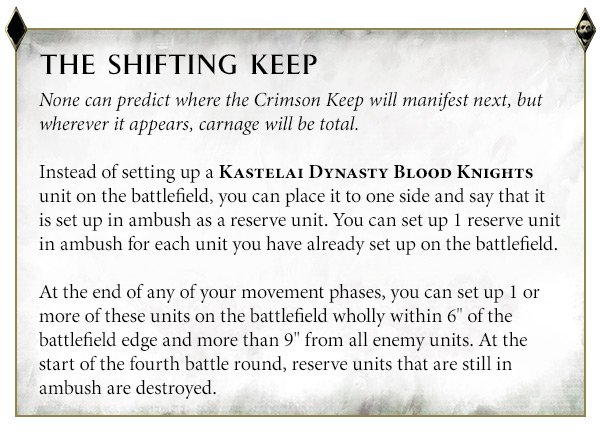 So not only can they take an army full of Blood Knights, they can hit from weird angles thank to this ability – coming in from sides can really help you get to those backfield objectives in conjunction with being able to ride through the chaff units. And the longer the game goes on …the better. 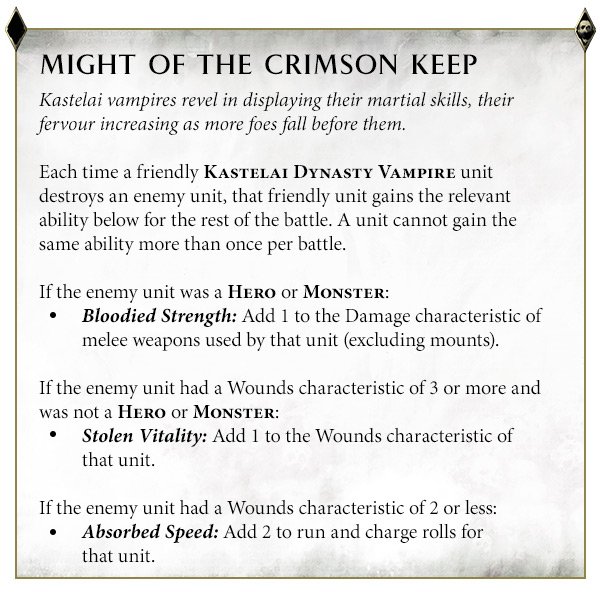 Depending on what they kill, they can gather up some serious buffs. Get ready for mounted vampire action from the Blood Knights! 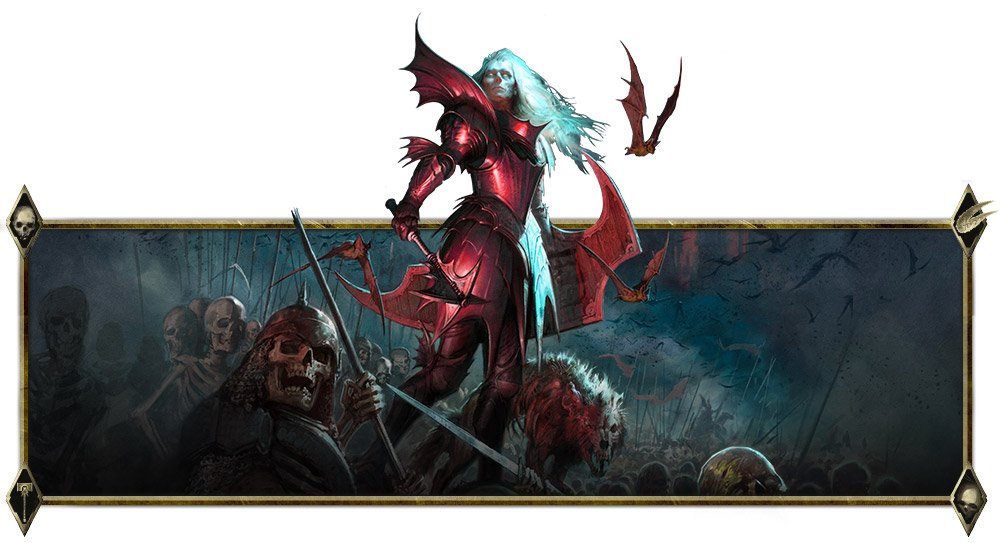 The Soulblight Gravelords are up for Pre-order this weekend!

Author: Adam Harrison
Writer, Editor, Texas Native, and Austinite for 15+ years, Adam covers all things Tabletop Gaming. Which includes Warhammer 40,000, Age of Sigmar, D&D, Board Games and everything else that involves dice, boards, cards and a table. A hobbyist, player, and collector of miniatures and games, Adam's current obsession are his Death Armies for Age of Sigmar, his Blood Angels and Tyranids for 40k, and his ever growing Arkham Horror: The Card Game Collection.
Advertisement
Age of Sigmar AoS Death Games Workshop Miniatures Rules
Advertisement

Warhammer Next Week - Vampires Are Back With A Vengeance 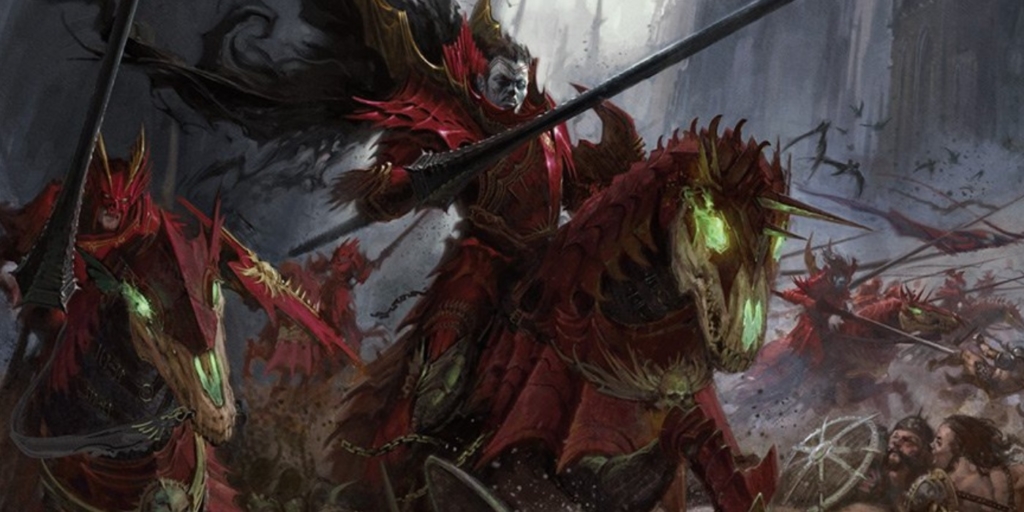