Age of Sigmar – Bow Down to the Queen! Alarielle’s New Groove 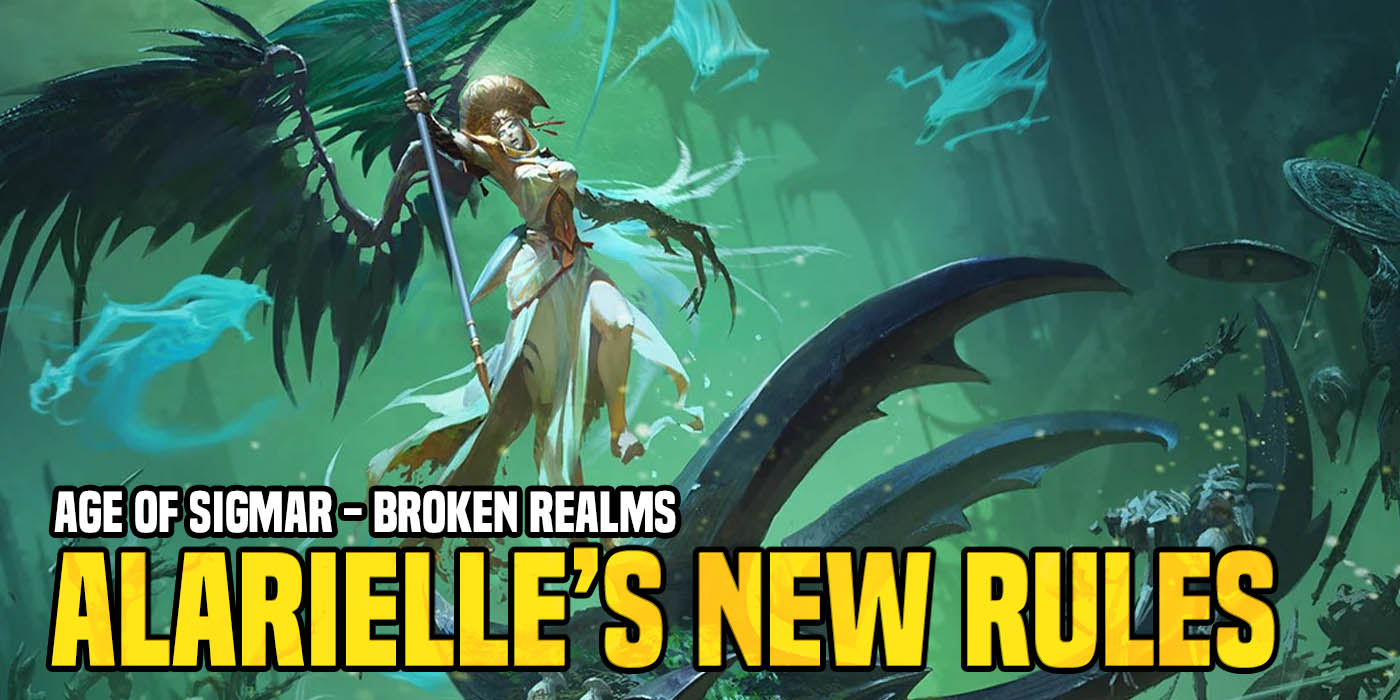 The forest is awake and it hasn’t had any coffee. You won’t like it before caffeine.

Alarielle and her massive beetle have been a staple of Age of Sigmar since the beginning of Sylvaneth, and she’s always been a potent force multiplier and combat general in her own right. She can cast, she hits like a semi-truck, and she can heal nearby models, so you’d think they couldn’t do much to make her better. Well, apparently, the release of an ancient God of Destruction is enough to make the Everqueen turn her power meter up to 11, and she’s got a shiny new warscroll to prove it. Here’s a quick overview of the changes to Alarielle’s rules and how she’s changing on the battlefield. 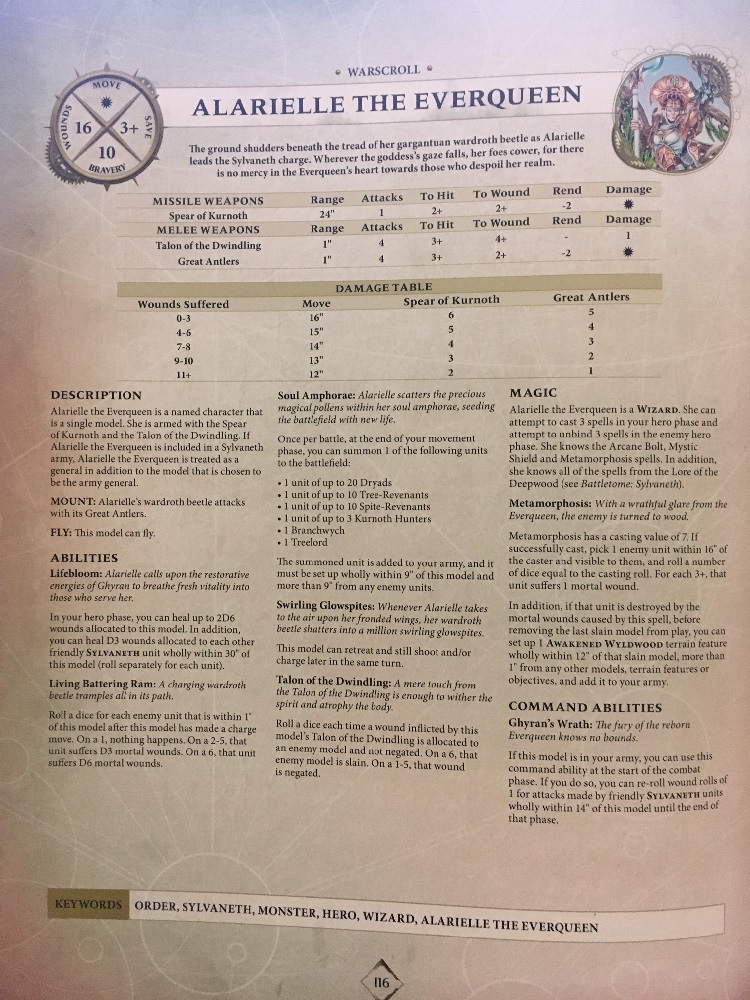 As a massive monster, Alarielle and her Wardroth beetle use the bracketing system, growing weaker over time. Unfortunately, her new warscroll does deteriorate faster than her previous one, but considering how powerful the rest of her warscroll is, she probably won’t stay in her lower brackets long. 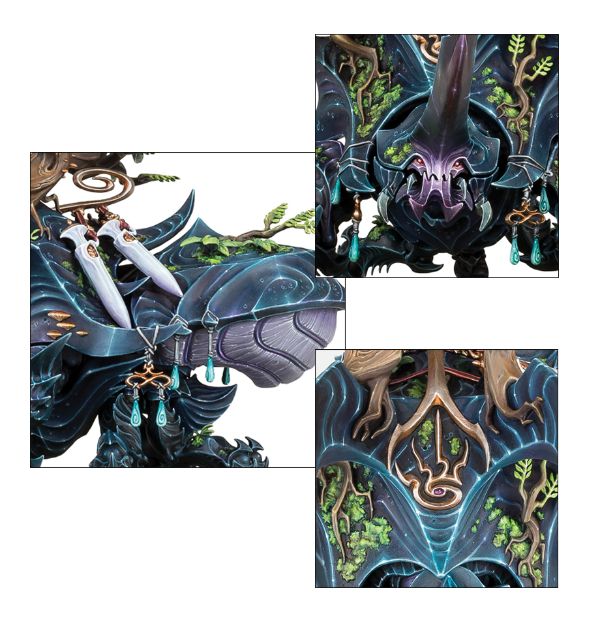 Alarielle hasn’t increased her armor save or wounds, but her Lifebloom ability has become extremely powerful. It still heals D3 wounds to every friendly Sylvaneth unit wholly within 30″, but it ALSO heals Alarielle herself for 2D6 every hero phase. You won’t have to worry about deterioration as much when you can go from almost dead to completely healed in a single round. Her support stats haven’t changed either, still giving wound buffs, summoning units, and pulling trees out of the ground just like always. 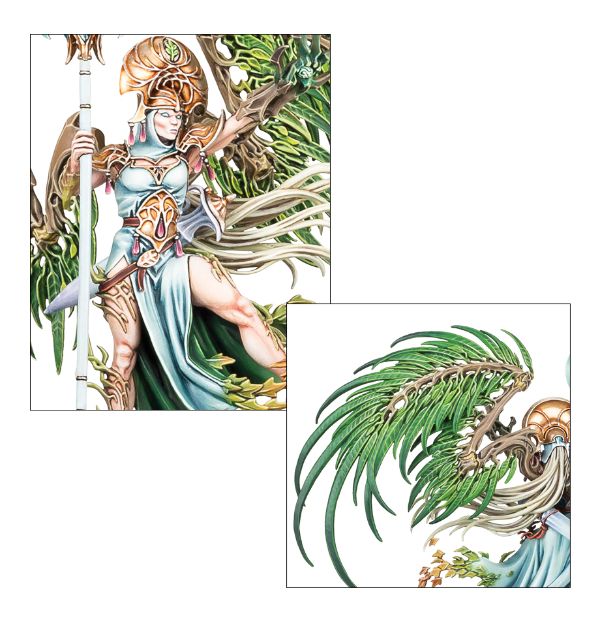 Here is where Alarielle really shows why they call her the Everqueen. Her Spear now has a fixed range of 24″, but it now hits on a 2+ and deals a flat 6 wounds at full health. Her Talon went from being a fairly decent damage item to a deadly coin flip, doing nothing on a d6 roll of 1-5 but outright removing the enemy model on a 6. Her Wardroth also saw a buff/nerf combo, losing one of its Antler attacks in exchange for a buff to the hit and wound rolls, as well as more consistent damage on the Living Battering Ram charge ability. As if all that wasn’t enough, she can now run and shoot/charge in the same phase, making her a massive threat on the tabletop. 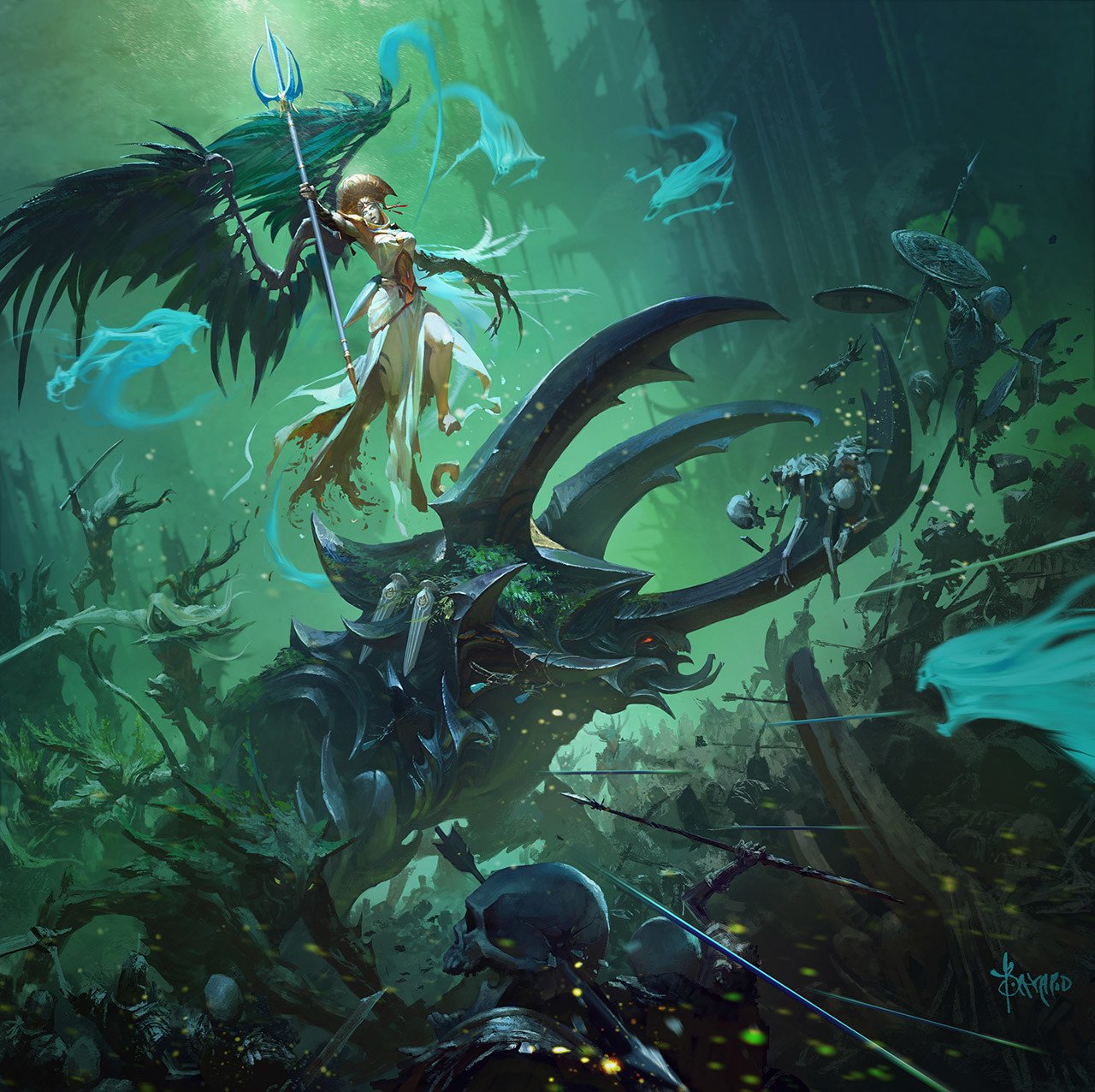 All of that epicness does come with a pretty significant point hike, but considering everything she’s bringing to the table, I assure you that she’s worth it. She can summon a unit to offset her cost, eliminate almost any threat single-handedly, and will take punishment and keep on kicking. While her points preclude her from being an auto-include, I would always consider her for your lists.

Author: Clint Lienau
Originally from North Carolina, Clint comes to Austin as the latest in a long list of haunts of a wandering actor. An avid gamer, writer, actor, pyrotechnician, and general nerd, he writes two Age of Sigmar weekly articles for Bell of Lost Souls from a slightly less than meta angle, plus a weekly tournament roundup. When not busy being a clueless cowboy, Winterfell Bannermen, or whatever else acting life throws at him, he enjoys reading folklore from around the world, writing narratives for his Wargaming armies, or watching all the movies he can. Look for his storytelling podcast, By the Dancing Fire, or find him on Twitch at RedWendigo13.
Advertisement
Age of Sigmar AoS Order Games Workshop Miniatures Rules
Advertisement 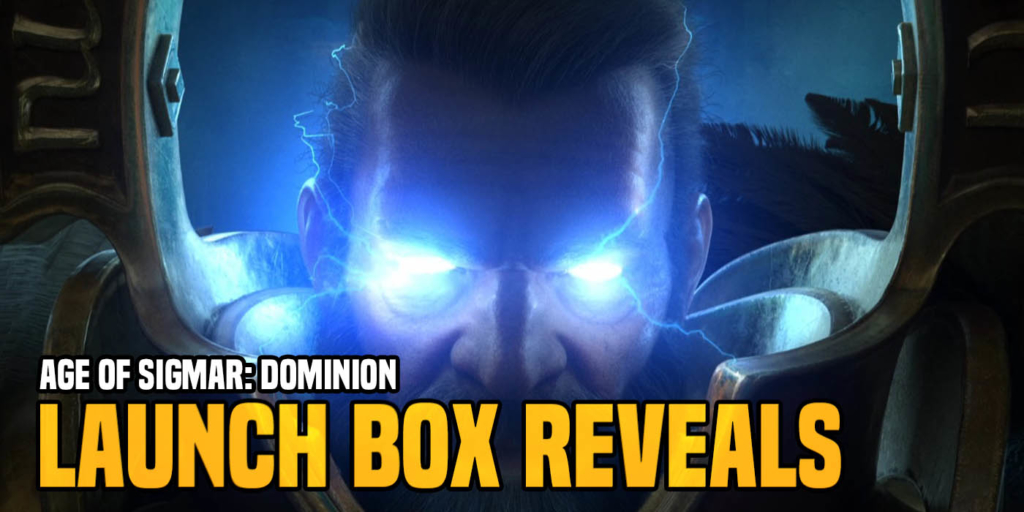